From L to R: three cask strength samples, and The Balvenie Signature.

Last year, famed Speyside distillery The Balvenie released Batch No. 2 of Signature, a 12 year old single malt Scotch created by Balvenie Malt Master David Stewart in celebration of his 45th year in the whisky industry. The Signature is a marriage of three different casks: first-fill bourbon barrels, refill casks (which first held bourbon, then Balvenie whisky), and Sherry butts. The Balvenie describes the result as “a perfect balance of spice and subtle oak, deliciously enveloped in The Balvenie’s trademark honeyed character.” Each Signature limited edition release is made from a unique mix, resulting in different flavor profiles with each subsequent batch.

Regarding the Signature, Stewart said, “It has given me great pleasure to create a signature whisky as part of The Balvenie range. Maturing and marrying the finest single malt Scotch whisky has been my passion for over 45 years and it’s an honor to mark the moment with an addition to The Balvenie family.”

My friend Lena and I were recently invited to The Balvenie Deconstruction Dinner, a special media event that took place at the Montage Beverly Hills. At this intimate celebration of The Balvenie Signature, we had an opportunity to step into David Stewart’s shoes and create our very own bottles of Signature Batch. The dinner was hosted by Balvenie Global Ambassador David Mair and Balvenie Western US Ambassador Andrew Weir. 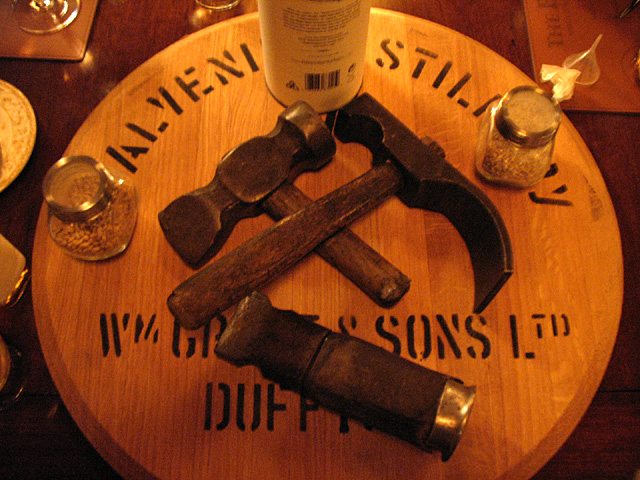 The event began with drinks in an upstairs lounge, featuring Blood and Sand cocktails made with The Balvenie 12-Year DoubleWood, Cherry Heering, sweet vermouth, and orange juice. Our drinks were a nice balance of sweet and tart, with the DoubleWood’s fruit and Sherry notes shining through.

After introductions, dinner was served in a warmly lit private dining room, decorated for the occasion with Balvenie accoutrements and a photo gallery. 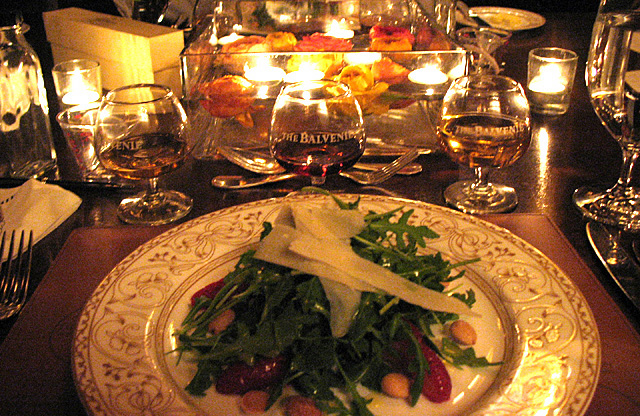 The Balvenie Signature, Batch No. 2.

Once we were seated, Andrew welcomed us and said that David had procured cask strength samples of the three 12 year old single malts that comprise the Signature. A few drams of samples were lined up in front of each guest, ready for tasting and mixing. Such cask strength samples aren’t available to the public, so we were especially fortunate to have them at the dinner. At cask strength, the samples were a whopping 63.5% ABV (127 proof), so David and Andrew both cautioned us to go easy with the sips.

The bourbon cask was an amber color, with notes of vanilla and caramel. The Sherry cask was rich and dark, with a complex flavor profile of sweet Sherry, raisin, and pepper. The refill whisky cask was the lightest in color, with spicy fruit, anise and licorice notes. As we tasted the samples we also began our first course, a Wild Arugula Salad served with strawberries, Marcona almonds, organic Parmesan, and a Meyer lemon vinaigrette.

Then the Signature Batch No. 2 was poured, and as David gave us some background on the Signature, we enjoyed the result of David Stewart’s decades of experience. After tasting the three samples, we were really able to discern what they brought to the Signature Batch: initial notes of spice, fruit, and vanilla; then sweet Sherry and caramel. On the palate, it’s full-bodied and smooth, with raisin, vanilla, honey, Sherry, and a hint of smoke and oak. The finish is long and spicy. 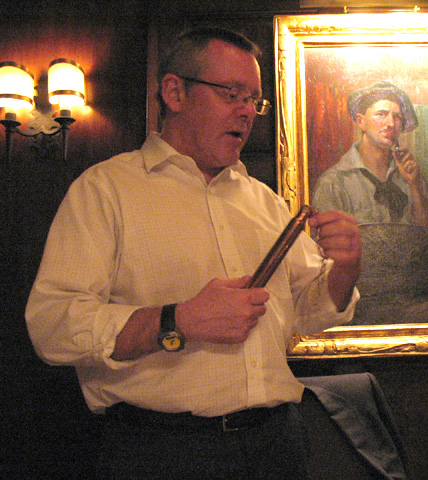 David also talked about The Balvenie’s uniqueness (family-owned, grows its own barley, has its own floor maltings and even employs its own coopers and coppersmiths) and his personal history with the distillery. He also demonstrated the “Dipping Dog,” a clever device that was sometimes used by distillery workers to steal a bit of the good stuff for themselves. 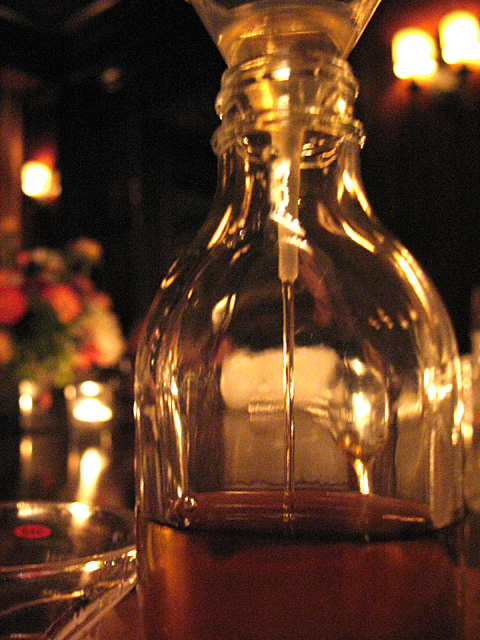 For our entrée we had a choice between Prime Filet Mignon or Chilean Sea Bass. (“Yes, yes, I remember, I had lasagna.”) Lena and I opted for the steak, cooked a perfect medium rare, topped with peppercorn sauce, and served with crispy polenta, Swiss chard, and baby carrots. Andrew graciously topped off our glasses with Signature Batch, and I thought to myself, this has to be the best Scotch event ever.

Then came the standout part of the night, when we tried our hands at being Malt Masters. As Andrew explained, we could mix the samples in whatever proportions we liked, using the provided OXO 2oz. mini measuring cups and funnels. I opted for a nearly 1:1 ratio of the Sherry and bourbon casks, about two ounces each. The whisky cask provided the finish, almost like a float. I cut the mix with a bit of water, as David and Andrew suggested, then capped and shook the bottle to mix. The result was pretty nice, if I do say so myself. With the water, the ABV of my batch was reduced to about 55%. Lena didn’t cut hers at all; hopefully no one is smoking when they’re sipping her batch. 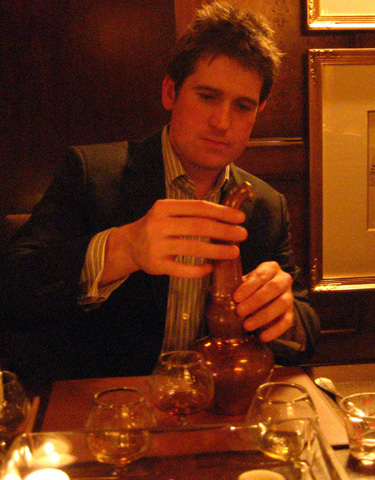 We were then given labels to name our personal Signature Batch bottles. I came up with the clever name of “Thirsty 2010” for mine. Meanwhile, Andrew assembled a miniature copper still and described the “barley to bottle” process that creates the “water of life” we all love so much. 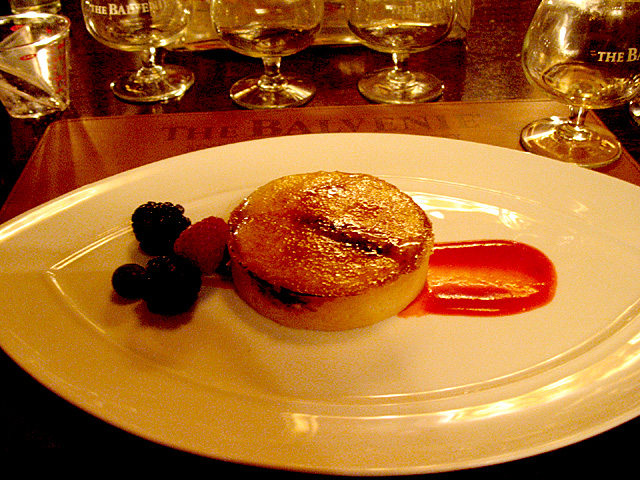 As if all this weren’t enough, our dessert was served: Traditional Crème Brûlée with strawberry coulis and assorted berries. To go with this, we sipped The Balvenie PortWood 21 Year Old and the Madeira Cask 17 Year Old. The PortWood in particular paired really well with dessert. David even suggested pouring a little bit over the crème brûlée, though I couldn’t bring myself to do it.

The evening drew to a close, and the warm glow we felt was from more than just the Scotch. The Deconstruction Dinner was a superb, memorable experience. Beyond the drams of Balvenie and one-of-a-kind keepsake, it was a rare opportunity to briefly step into the shoes of a whisky legend and gain new insight into what it takes to be a true master. Many thanks to David Mair, Andrew Weir, Julie Conover, and the rest of the Balvenie team! 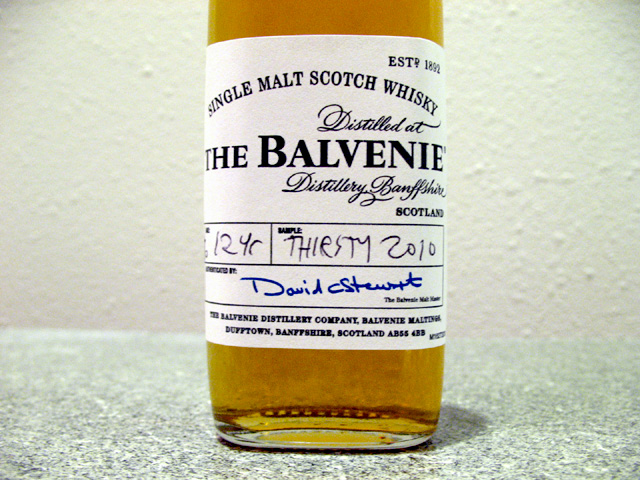