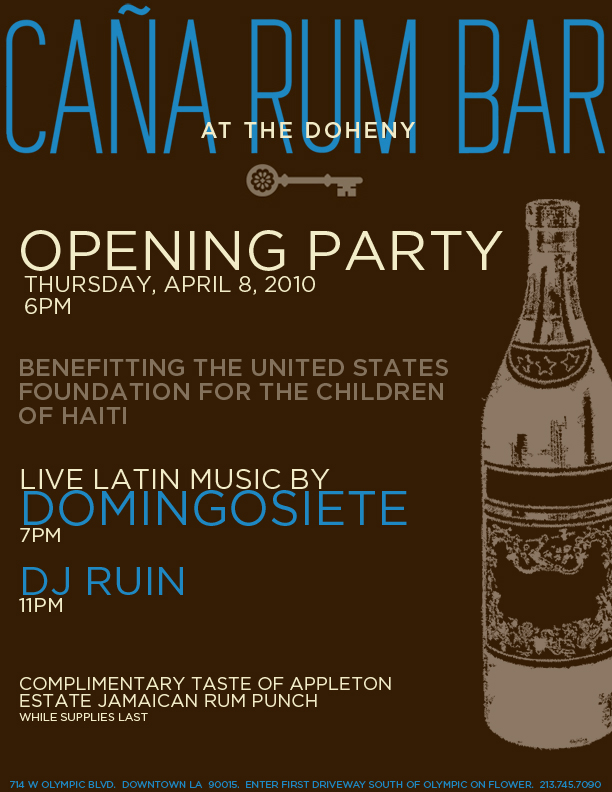 After a few weeks in soft open mode, Caña Rum Bar is ready for its close-up this Thursday, April 8th. The former Doheny has been reimagined as a 1930’s Caribbean lounge, featuring over 140 small-batch rums, a rum-based cocktail menu, and seasonal wines and beers from the world’s rum producing capitals. 213 in-house spirits consultant John Coltharp (former Bar Manager at Seven Grand) and Doheny GM Joel Black have facilitated the transformation. The Caña cocktail menu features signature creations and classic rum cocktails from daiquiris to Tiki drinks, as well as freshly-made, seasonal rum punches.

Caña is still a members-only venue, but its annual membership fee is now just $20. Included in this fee is membership in the Caña Rum Society, which will host complimentary rum tastings, spirit education, and special events. The program is similar to the well-regarded Seven Grand Whiskey Society, co-created by John during his tenure.

In addition to the libations, the Caña Grand Opening will feature live Latin music from Domingosiete, and food provided by Reggae Chicken, the Jamaican-American fusion food truck. Later on, DJ Ruin and Kenny Hudson take the decks.

I stopped by last weekend with a few friends and introduced them to a proper Dark ‘n’ Stormy, made with Gosling’s Black Seal Rum and ginger beer. Not only did my friends love their cocktails, they also snapped up memberships on the spot. By this time we had the patio to ourselves and enjoyed our drinks while a jazz band played. It was nice to wind down our Saturday night in such a relaxed way, but something tells me this Thursday will be a much livelier experience.

Your $20 annual membership fee will be donated to relief efforts in Haiti, home of Rhum Barbancourt, widely regarded as one of the best rums produced in Latin America. Proceeds will benefit the United States Foundation for the Children of Haiti (USFCH.org).