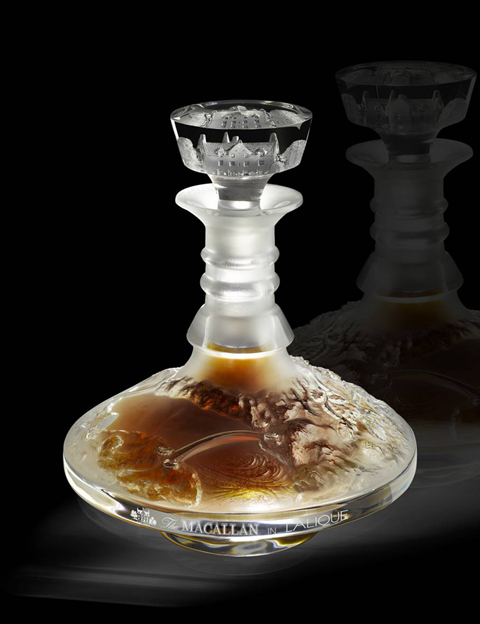 Building on previous successful collaborations, The Macallan and Lalique have partnered to produce a one-of-a-kind decanter, made using the ancient cire perdue (“lost wax”) method. Created in conjunction with the 150th anniversary of René Lalique’s birth, this decanter will hold the oldest and rarest Macallan ever bottled by the renowned distillery. The Macallan in Lalique: Cire Perdue decanter contains a 64 year old Macallan single malt whisky, destined for final auction by Sotheby’s on November 15, 2010 in New York. All proceeds from the sale of this remarkable piece will be donated to charity: water, a non-profit organization bringing clean and safe drinking water to people in developing nations.“We are delighted that the proceeds from this historic auction of The Macallan in Lalique: Cire Perdue decanter will benefit charity: water,” said Scott Harrison, founder of charity: water. “Clean water projects bring communities together and offer improved health, a better quality of life and hope for a better future. I look forward to working closely with The Macallan and Lalique to bring clean water to some of the billion people on the planet without it.”

The Macallan in Lalique: Cire Perdue decanter will travel around the world on an eight month traveling exhibit and fundraising journey from Paris to New York, with stops in Madrid, London, Moscow, Seoul, Hong Kong, Johannesburg, Taipei, Shanghai, Singapore, Tokyo, and Beverly Hills. At events in each city, The Macallan and Lalique will auction tastes of The Macallan 64 Year Old to benefit charity: water, which has funded some 2,300 freshwater projects in 16 countries, bringing potable water to over a million people. At the Paris launch on April 6, a 10 cl dram of The Macallan 64-year was auctioned off for 5,000 EUR (about 6,750 USD). Proceeds from the Paris auction alone will provide a community of up to 250 people clean, safe drinking water for up 20 years.

The Macallan 64 Year Old
The rare Macallan within the Lalique decanter has been vatted together from three casks, all built from sherry-seasoned Spanish oak. The first was filled in 1942, the second in 1945 and the third in January 1946, from which the age of this special Macallan has been taken. This expression is the oldest Macallan released by the distillery in its 186 year history. The previous oldest Macallan release was the 60 year old, distilled in 1926 and bottled in 1986, of which only forty bottles were ever produced.

David Cox, Director of Fine & Rare Whiskies for The Macallan, comments: “We have established a very close working relationship with Lalique over the past six years. This extraordinary project has raised our partnership to new heights, combining the brilliance of Lalique’s designers and craftsmen and the outstanding quality and character from the masters of spirit and wood at The Macallan to produce a single decanter which will never be replicated, filled with the oldest and rarest Macallan our distillery has ever released. Having decided to donate the proceeds from the auction of this beautiful decanter and its rarest of whiskies to charity, we decided to partner with charity: water. Given the predictions of future water shortages and recent natural catastrophes, we felt we wanted to contribute something really positive to help. We are hoping for some extraordinary generosity at the final auction in New York in November.”

“Water is fundamental to the craftsmanship behind both The Macallan and Lalique,” continued Cox. “The word ‘whisky’ derives from the Latin, aqua vitae, or ‘water of life,’ and is one of the three natural ingredients of The Macallan, together with barley and yeast. Water is also critical for Lalique at the point of detailing, sanding and polishing the crystal pieces.” 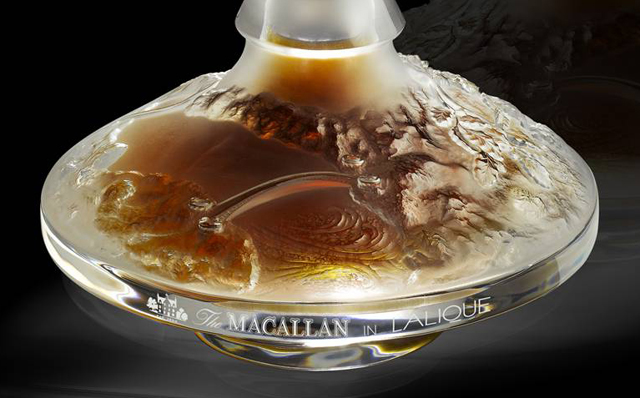 The Lalique: Cire Perdue Decanter
The Cire Perdue decanter has been designed exclusively for The Macallan by the legendary French crystal house Lalique, at its Design Studio in Paris. Handcrafted with the skills for which Lalique has achieved world-wide recognition, the Cire Perdue’s design is based upon a ship’s decanter of the 1820’s, the decade in which The Macallan was founded. Lalique’s designer felt the decanter shape lent itself perfectly to the beautifully realized panorama of The Macallan estate by the river Spey, in northeast Scotland.

The decanter itself has been created by the lost wax process, an ancient practice originally developed to cast large pieces in bronze. After first modelling a piece in wax, it is covered with plaster and then sent to the oven to bake the clay while the wax melts. Finally, molten crystal is poured in the emptied shape. Up until 1930, René Lalique himself crafted glass pieces using the Cire Perdue technique, but abandoned it as arthritis increasingly affected his fingers.

“We are enormously proud to be collaborating again with The Macallan, and in such a worthwhile cause,” says Silvio Denz, President and CEO of Lalique. “In today’s highly interconnected world, we are all increasingly aware of the needs of those much less fortunate than ourselves. We have been working on a series of decanters with The Macallan since 2004 and, over that time, have come to appreciate our shared values of a passionate commitment to outstanding quality, artistry and integrity. These decanters, each holding Macallan whiskies of 50, 55 and 57 years old respectively, have proved hugely admired and sought after around the world by whisky consumers and connoisseurs, as well as collectors of Lalique crystal and lovers of beautiful objets d’art. This latest decanter, a remarkable, unique work of art, holding such an old and rare Macallan, takes our partnership to a new level. I wish every success to its tour du monde and to the final auction by Sotheby’s in New York in November.” 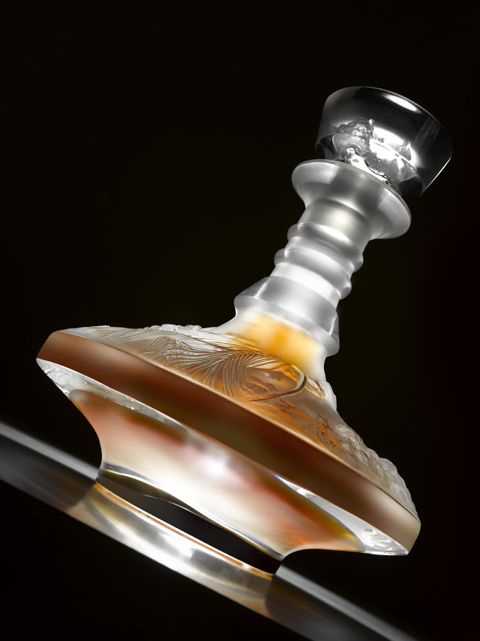 The Macallan and Lalique at Auction
The Macallan is one of the most sought after single malt whiskies in the rare whiskies auction market. A 60 year old Macallan, distilled in 1926, sold for US$75,000 to a South Korean buyer in 2005. As the Cire Perdue decanter contains an even older expression, the extraordinary price for the 60-year could very well be surpassed.

Lalique is also highly sought after by collectors around the world, with recent sales prices significantly exceeding pre-sale estimates. “Chardons,” a 1903 René Lalique jewel, sold for US$363,000 in October 2006 in New York. In October 2009, an Art Nouveau multi-gem and enamel pendant necklace by René Lalique was auctioned in New York for a world record US$554,500 (against an estimate of US$400,000).

From Sotheby’s London, Jeremy Morrison, Director of 20th Century Design: “Both The Macallan and Lalique are premier brands and Sotheby’s has worked along side them both in various guises for a long time. The virtuoso glass art of René Lalique is amongst the most sought after and recognizable forms of 20th century design. One of the masters of the Art Deco style, Lalique’s pioneering work has been offered in Sotheby’s sales since we first held dedicated auctions of Decorative Art in the late 1960s. Sotheby’s is very proud to be involved with Lalique and The Macallan in their project to raise substantial funds for charity: water to help bring clean drinking water to developing nations.”

The Exhibition and Fundraising Tour
The Macallan in Lalique: Cire Perdue decanter will travel across the world, beginning in Paris on April 6, 2010 and ending in New York City at the Sotheby’s auction on November 15, 2010.

To track the fundraising progress and view images from the tour, visit: www.themacallan.com.

For images of the lost wax process, the decanter, and the Paris auction, visit The Macallan on Flickr.