A Taste of La Primavera at Drago Centro 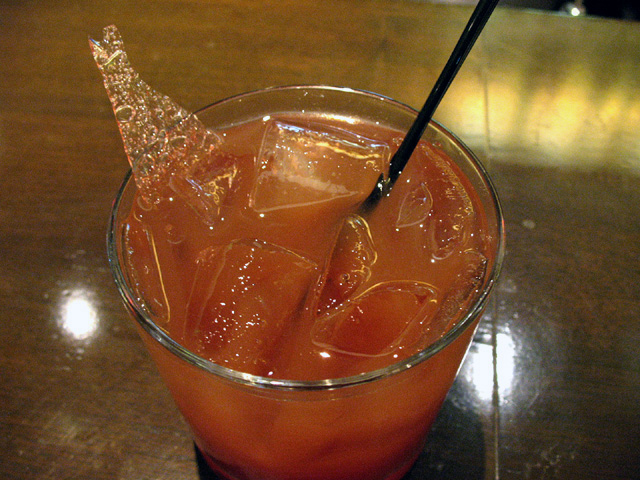 New for spring: the Barbarossa.

Since his arrival in Los Angeles as the award-winning sommelier from Guy Savoy in Las Vegas, Michael Shearin has helped establish Drago Centro as a foodie destination for those seeking high end Italian cuisine, a formidable wine list, and a handsome, urban setting. But Michael has also sought to make Drago as well known for its cocktail program, no easy task when many of the city’s top mixology venues are also located in downtown.

To celebrate the debut of the Drago Centro spring cocktail menu, Michael hosted a launch party on Wednesday. The new drinks were specially priced at just $6, half the regular price of $12. My friends Amy and Lena joined me for the bargain imbibing, and if the number of bloggerati in attendance that night was any indication, Drago Centro has come into its own as a cocktail destination. 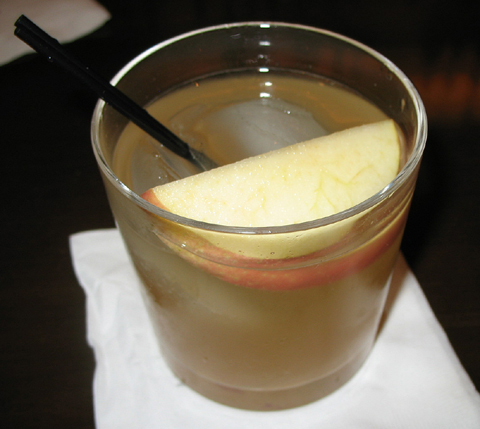 Amy got things started with a Rallenta (“Slow Down”), made with Plymouth Sloe Gin, Créme de Pêche, St. Germain Elderflower, Orange Bitters, and soda water﻿. Served in a highball, the refreshing cocktail is balanced between the tart, sweet Plymouth, the peach liqueur and the floral St. Germain. Despite its name, it’s a perfect drink to start a session. I can see Rallentas going down very well when Drago’s patio gets busier in the weeks ahead.

Lena began with La Grande Mela (“The Big Apple”): Woodford Reserve Bourbon, Cointreau, Pink Lady apple, Rhubarb Bitters, and lemon juice. Like the Rallenta, La Grande Mela is well balanced; the peppery bourbon plays well with the citrus and sour flavors, rounded off by a nice hit of apple from the garnish.

My first cocktail was a Testarossa (“Redhead”), made with Siete Leguas Blanco Tequila, serrano tincture, raspberries, lemon juice, and Hawaiian red salt. The smooth, spicy blanco was enhanced by the tincture’s bite, offset by the fruit and citrus tartness and the salted rim. As with the others, it’s a nicely balanced, visually appealing cocktail.

Next up for Lena was the Settentacinque (“75”): Principe Prosecco, Kelt Cognac, Punt e Mes, Limoncello, Peychaud’s Bitters, and a sugar cube. Lena was pleasantly surprised at how the flute lends itself to prolonged, casual sipping. It’s certainly an elegant drink. Like the Rallenta, I’m sure it will be ordered frequently as the weather warms up. Lena mentioned more than once that the Settentacinque was her favorite cocktail of the night.

Amy ordered the Draculino (“Little Dracula”), made with No. 209 Gin, Dimmi Liquore de Milano, Harry’s Berries strawberries, basil, and lemon juice. Amy enjoyed her second cocktail, though she wished the Draculino was “bloodier-looking.” I didn’t get much from the gin, as the strawberries and basil were very forward, anchored by the Dimmi. Definitely drinkable and pleasant, a cocktail ready-made for the season. And not quite what you’d expect, given its name.

Sticking with the red theme, my second cocktail was the Barbarossa (“Redbeard”), made with Kraken Black Spiced Rum, Campari, orange juice, lime juice, and a garnish of Campari candy. The first thing you’ll notice is that translucent piece of hard candy, a creation that Michael credited to Drago’s Pastry Chef, Jashmine Corpuz. The sticky Campari candy slips easily into your drink (as mine did), so if you want to take a bite, grab it first. Once it’s in there, the candy dissolves quickly. Like its pirate namesake, the Barbarossa takes no prisoners: the 94 proof Kraken’s all-spice and chocolate notes grab you right along with the bitter Campari. A standout cocktail for me, though perhaps not for everyone given its somewhat assertive flavor profile. 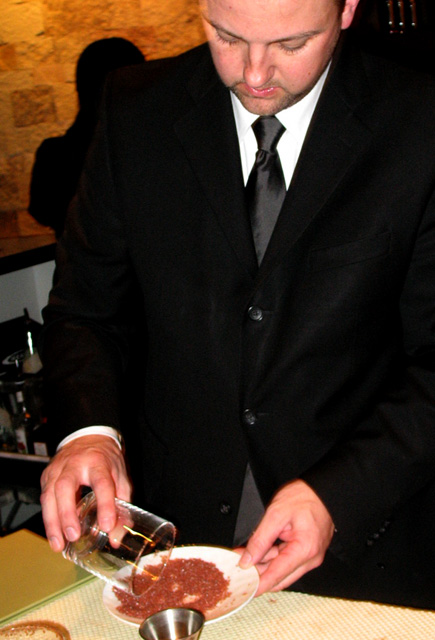 While we did well, there are still several spring cocktails left to try:

From a flavor standpoint, the spring cocktails cover a wide range while remaining fresh and seasonal. The drinks we had all come from the same bright color palette, apparently just a happy coincidence. I know we have to be back soon to work our way through the list; before you know it, Michael will be launching his summer menu!