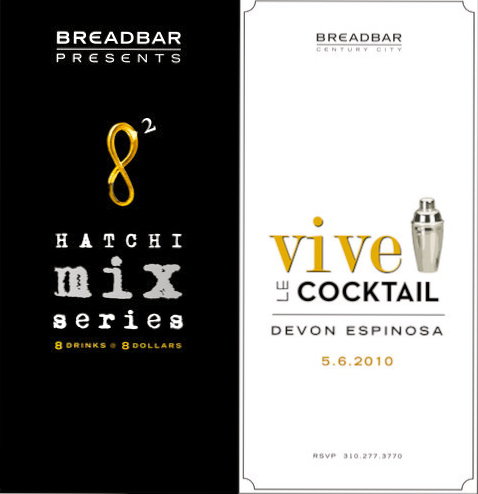 This Thursday, May 6, Breadbar presents the debut of Hatchi Mix, a guest mixologist series hosted by Chef Noriyuki Sugie at Breadbar’s Century City location. Inspired by the popular Hatchi Guest Chef Series, Hatchi Mix will allow imbibers to experience the evolution of the cocktail, from the classic era to its present-day state, through a special one-night-only menu. Taking a cue from its name (hatchi is the number “8” in Japanese), each unique Hatchi Mix menu will feature eight cocktails, priced at $8 each.

The opening mixologist for Hatchi Mix is Devon Espinosa from The Tasting Kitchen, where the cocktail program has earned accolades from the likes of Julian Cox (Rivera) and Eric Alperin (The Varnish). Espinosa will present his Vive le Cocktail concept, an ode to mixology classics featuring pre-Prohibition libations such as:

In addition to launching the series, Espinosa will invite future Hatchi Mix guests to highlight the modern cocktail’s different aspects and mixology techniques, as well as showcase the thriving Los Angeles cocktail culture. Upcoming mixologists include Joel Black (Caña), featuring his rum cocktail menu on June 3, and the aforementioned Julian Cox, whose cocktails will spotlight tequila on July 1.