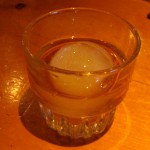 While I was out of town celebrating my parents’ anniversary last weekend, my good friend and fellow imbiber Scot (The RBH) had the enviable task of checking out the newly expanded cocktail menu and whiskey selection at Bigfoot Lodge West. Herewith, his impressions from the sneak preview event…

Everyone has a bar they find themselves in more often than others. They may not consider it their favorite saloon but it’s the one they can walk home from and, in days of rising cab fare, location could be all it takes to turn a “stop by” into a destination. That’s Bigfoot West for me, or at least it always has been. Though it’s only a few blocks from the shanty whence I reside the cocktail menu has never been something to get excited about and it seems the good people at 1933 Group recognized this. Although Bigfoot West is only a year into existence they’ve moved former Spirits Director of Thirsty Crow, Brandon Ristaino, over to the Westside and let him have his way with creating a new cocktail menu and hand-selecting 80 of his (and soon to be our) favorite caramel colored elixirs. In fact, Bigfoot West is bragging they now have the biggest selection of small batch bourbon on the Westside – and believe me, this Georgia boy loves his bourbon.

I suppose it was the aforementioned location and caramel colored love that led me to jump at the chance to take Daniel’s place at the press launch of Brandon’s new menu – well, that and the opportunity to taste some craft whiskeys I wouldn’t be able to afford on one of my usual Saturday nights. Though I will admit I was quite intrigued by the addition of an ice machine that can press three near perfectly rounded balls of ice per minute. I wonder if you can rent one for house parties?

I started off with the Rittenhouse 25-year-old Rye on Daniel’s suggestion. I had a feeling it would be harsh as I first brought it my lips but it smoothes out over the palate immediately.  The ‘Ritt 25’ is a very easy to drink rye that retains a whiskey kick and would be a great addition to an upscale home bar. I then shared a pinch of Bigfoot West’s Horny Goat Elixir – a custom crafted herbal liquor designed to increase endurance, libido, and strength – and it’s surprisingly good. Some compare it to Fernet Branca or Becherovka but in my opinion it’s much smoother. Though it has a medicinal taste it isn’t overshadowed by liquorish as the aforementioned digestifs. 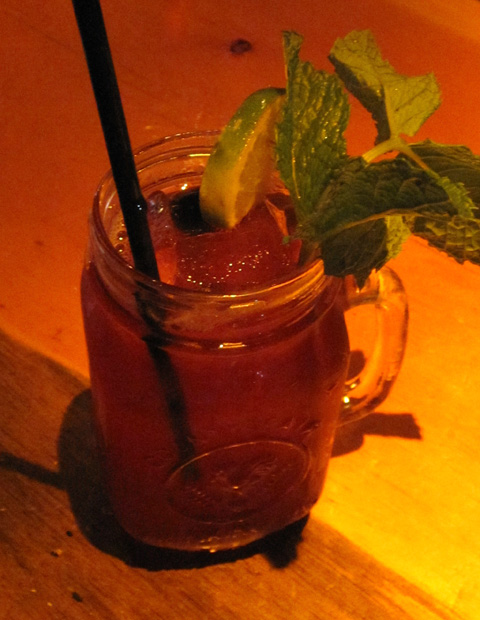 I decided it was time to cool things off a bit lest I succumb to an increased libido, so I tried one of Ristaino’s new cocktails – the Blackberry Pepper Bramble. Crafted with Gin, blackberry liqueur, lemon juice and sparkling soda (known as soda water to us good ol’ boys) the Bramble has a slight purple hue, though you’d never know it with the lighting at Bigfoot West. Despite the name, the fruit sits in the background and the pepper is subtle. It’s a great option for a slightly sweet and refreshing drink when you’re not looking for something citrusy.

I stayed with the cocktail menu and moved on to the Bourberry. The drink is on the familiar side of summer bourbon cocktails and tastes like a mint julep with a touch of strawberry and a good bit of ginger beer thrown in. The result is a very refreshing drink, which seems to be my thing right now. Hey, it’s summer, cut me some slack.

I closed things off by returning to whiskey and this time I went for a 23-year-old Pappy Van Winkle bourbon, which I thought was a bit harsh for something aged 23 years. It’s very drinkable but the kick is at the forefront as it hits the palate.

I’m going to go ahead and give Mr. Ristaino props on the cocktail menu as it features a mix of the new frontier of mixology while paying homage to the classics. There’s even a fine selection of champagne-based cocktails and let’s face it, the whiskey menu is complete and hard to beat without overstocking the shelves.