It’s been two months since Cruzan 9 Spiced Rum, the newest release in the Cruzan portfolio, made its debut. With its blend of vanilla, nutmeg, cinnamon, ginger, cloves, mace, allspice, pepper and juniper berry, Cruzan 9 is perfect for the kind of fall weather that has seemingly disappeared in the midst of L.A.’s current heat wave. The name “Cruzan 9” is based on its nine-spice blend, as well as a nod to the nine districts of St. Croix, where Cruzan rums have been produced since 1760.

“Cruzan 9 embodies the spirit of St. Croix,” said Gary Nelthropp, Cruzan’s Master Distiller. “We’ve balanced the blend of spices to create something that will be new to many spiced rum drinkers, but will feel very familiar to the people of St. Croix, who enjoy the bold flavor and kick of classic spiced rums.”

With its competitive price point, Cruzan has its sights aimed directly at Captain Morgan in the fast-growing spiced rum category. Cruzan’s confidence is apparent in this comment from Brand Director Amy Weisenbach: “The industry is full of gimmicks and pirates when it comes to spiced rum, but Cruzan 9 offers a ‘real’ rum experience.”

Cruzan 9: Cable Car
In the press materials that accompanied the review bottle, Cruzan notes that Cruzan 9 is “best enjoyed with cola or by itself over ice.” While I don’t think Cruzan 9 has quite the depth and complexity to be sipped on the rocks, I did enjoy the simple recipe for the Cruzan 9 and Cola that Cruzan suggests: 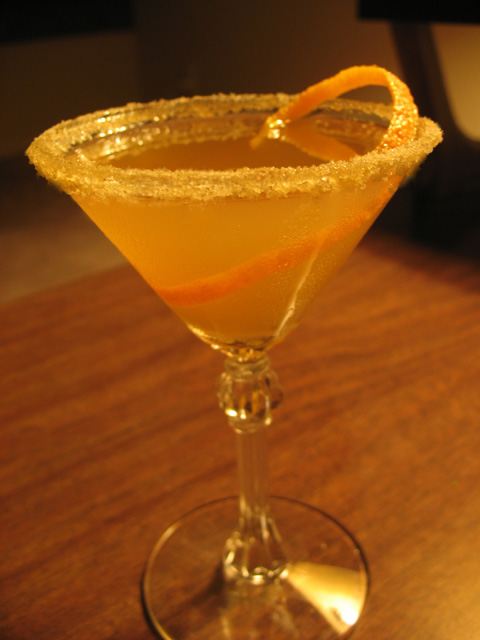 Since Cruzan is targeting Captain Morgan with its new release, what better cocktail to showcase the Cruzan 9 than the Cable Car, created in 1996 by Tony Abou-Ganim for Harry Denton’s Starlight Room in San Francisco. When he was creating the cocktail menu for the Starlight Room, Abou-Ganim was approached by Captain Morgan to feature its spiced rum in a signature drink, and a modern cocktail classic was born. The Cable Car’s name comes from the Starlight Room’s perch on the 21st floor of the Sir Francis Drake Hotel (“between the stars and the cable cars”) and the hotel’s location on the Nob Hill cable car tracks. While the Cable Car remains one of “Harry’s Favorites” at the Starlight Room, it traveled with Abou-Ganim to Las Vegas, where it’s still one of the most popular cocktails served at the Bellagio.

*To sugar-frost a cocktail glass, first chill the glass, rub the rim’s circumference about 3/4 inch in depth with a lemon wedge, then dip into a bowl of superfine sugar.