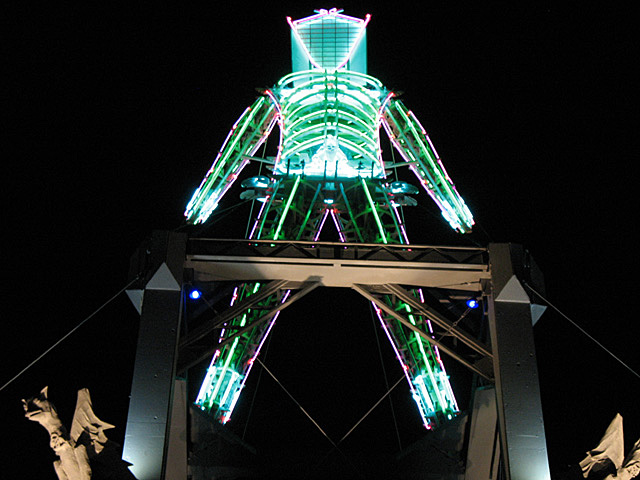 The following is Part 2 of a travelogue about my first trip to Burning Man. For those of you who stop by Thirsty in LA for cocktail- and spirits-related info and the like, feel free to skip this recap and return to your regularly scheduled booze blog. Otherwise, read on dear friends and fasten your seat belts, it’s going to be a bumpy night…

THURSDAY, 9/2: Tiki Party and Exploring the Playa
After staying up to watch the sunrise and hanging out well into the morning, we missed a good part of the next day catching up on sleep. Before we knew it, it was time to prepare for our Tiki Party. Aloha shirts and grass skirts, check. Leis for guests, check. Sound system, check. “Smiles, everyone…smiles!”

Thanks to a generous donation of rum, our camp bar was fully stocked and I was ready to make Mai Tais and Potted Parrots for the party (recipes below). I never thought my first bartending gig would be at Burning Man, but you’ve got to start somewhere, right? I have to admit, I was a bit nervous at first, but once my first few “customers” tried the drinks and gave me the thumbs up my confidence grew. Based on a very unscientific estimate of requests the Potted Parrot was the favorite of the night. Note to cocktail geeks: there are no garnishes because Burning Man has a strict anti-MOOP (Matter Out Of Place) policy, so the less little bits of stuff for people to throw away, the better.

Amber (who dressed for the party as a giant banana) invited nearby camps, and our bananambassador did well: once I had the drinks going and the music started (courtesy of our DJs Scot, Digital Rust and Synthetix), we had a nice flow of visitors. Among the guests were two more friends from SF, Carolin and Jochen. 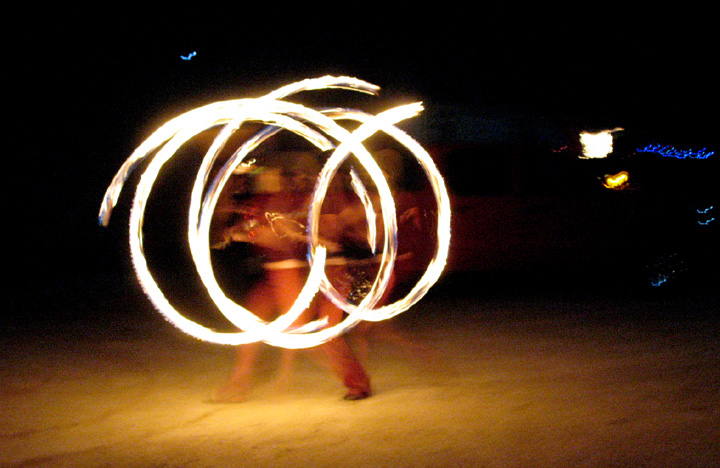 Our neighbor Blair rocked her fire poi routine at the tiki party.

Our neighbors from Portland were all virgins as well, and it was great to swap first-timer experiences with them. The Portland crew raved about the All-One Ark (a giant bathtub foam party), which sounded fantastic, but unfortunately we never made it there. Blair from Portland treated us to a great fire poi routine, which she performed like a veteran even though she told us she was a relative newbie.

The tiki party was fun, but eventually it was time to close it down and venture out. Our first stop was the familiar environs of Nexus to hear the funky, glitchy beats of Opiuo. After that, Chris and I wandered out on the playa, a journey that included my first night visits to the Man and Bliss Dance. 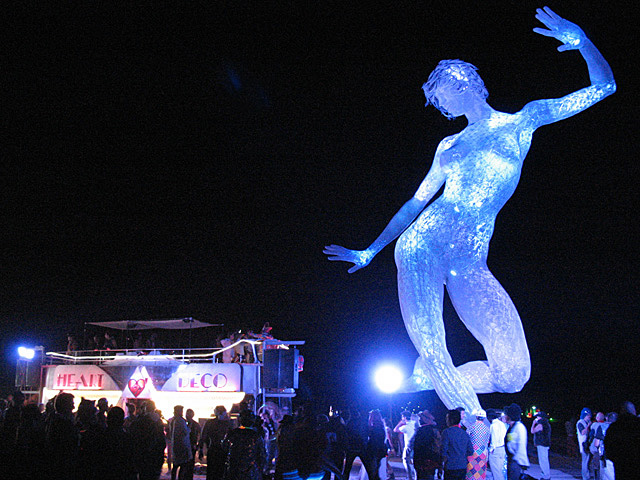 As striking as it was during the day, Bliss Dance took on an entirely new, beautiful dimension when its LEDs were activated and it cycled through an ever-changing variety of colors. When we stopped by, an Art Car party happened to be going down, featuring Robot Heart, FLAMEingo, Heart Deco and Heart Amplifier Pyros.

We moved on to Disorient, where François K and Osunlade were laying down soulful house grooves. Not long after we arrived, a riverboat Mutant Vehicle called Lady Sassafras pulled up and drove INTO the dance floor, completely blocking the DJ booth and LED display! The music never stopped, but talk about a buzzkill. The riverboat then moved on and left puzzled dancers (and no doubt an angry DJ) in its wake. 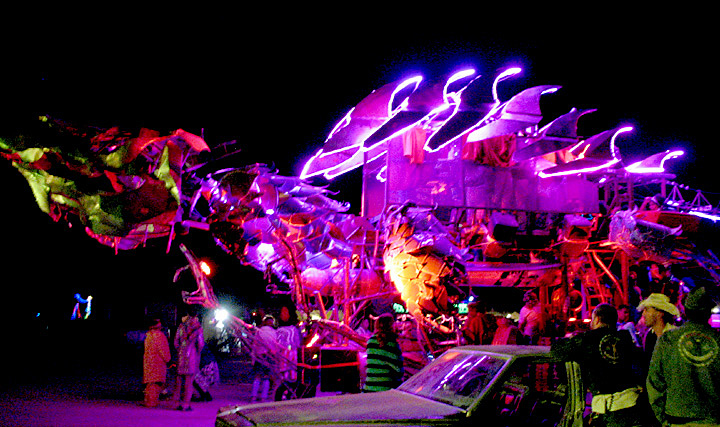 Nearby was Gon KiRin (“Light Dragon”) a marvelous 64-foot Mutant Vehicle with pink LEDs that threw devil horns with its front claws. Not only was it the coolest-looking MV we saw all week, the DJ drew us in with a nice set, though we never did catch his name. 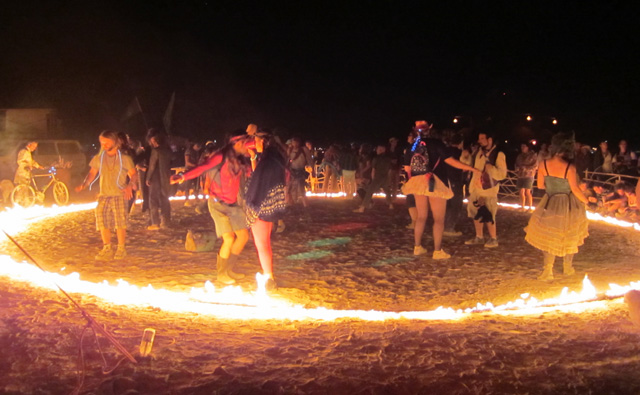 A short ride along the Esplanade brought us to a camp with a dance floor that was on fire. And I mean literally aflame, not just filled with people dancing under the watchful gaze of a metallic Buddha. The vibe was a bit subdued so we moved on. 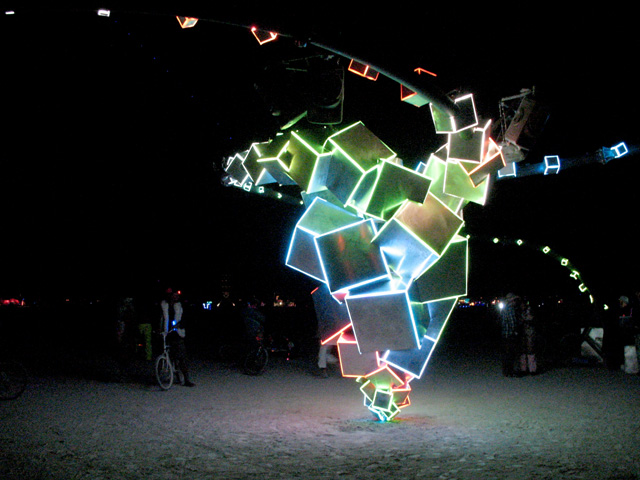 Next was a visit to Syzygryd, “a town square for the collaborative creation of music.” Three grid sequencers, each of which controlled a single musical instrument, were placed in a circle around the installation and everyone was invited to play. At the center of the circle, a “tornado of cubes” pulsed with synchronized sound and light.

Then it was back to Nexus to check in with our friends before our final stop at Root Society Yoshiwara, where Neurodriver was throwing down a blistering psybreaks set. No sunrise for us this time as we rode off to camp, which could probably qualify it as an “early night.”

FRIDAY, 9/3: Gnome Adoption, DJ Dan and Grand Mal
A relatively good night’s rest under our belts, Chris and I set off the next day to pick up ice from Center Camp. But first, we dropped by Gnome Camp, where the Gnome Adoption Agency was looking for homes for 300 needy garden gnomes. 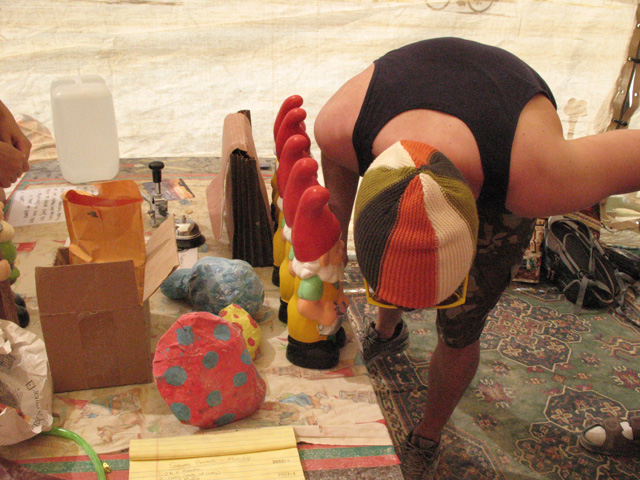 Chris listens for the gnome that will "speak" to him.

After we were given stamps from the “Department of Gnomeland Security,” Chris went through the rigorous gnome adoption process, which began with an in-depth interview. Chris was then told to listen for the gnome that “spoke” to him, and he eventually heard one, which he named Ford Prefect. Chris swore an oath (with me as surrogate parent) and we were on our way.

Capt. Bob, a member of the Man's build team. The Dilated Peoples tent is behind him.

After we dropped off the ice, Scot joined us and we stopped by Chris’ friends at Dilated Peoples to enjoy a wonderful Eye Spa session. While we waited, we were introduced to Captain Bob, a member of the Man’s build team for eight years. Bob thought the Man looked “beautiful,” the best it’s looked in years. Dilated Peoples describes Eye Spa as “a soothing treatment of refreshing eye drops, cucumber slices and a cooling facial gel-pack…followed by a meditative lavender-scented eye-pillow.” Add in water misters, massages and chilled out downtempo, and the Eye Spa treatment was fifteen minutes of pure bliss. The least we could do was gift them with some Don Q, which they gladly accepted.

Later that day it was off to DISTRIKT, which was jumping thanks to DJ Dan, who threw down a superb set that hearkened back to the glory days of Funky Tekno Tribe. As he took us on a journey from old school to electro and disco house, Dan dropped Duck Sauce – Barbra Streisand and a crazy chimpanzee-sampling track, two standouts that he’d play again over the weekend. To help dancers keep cool, DISTRIKT continually sprayed the crowd with a high-powered water gun. We did our share and gave out popsicles, including one to Dan after thanking him for his awesome set.

Then it was back to camp to prepare for a big Friday night, which started off on the far side of Black Rock City at an intimate party hosted by a friend of the SF crew. Up til now we had been extremely lucky with the weather, with mild temperatures at night and negligible wind all week. At some point during the get together a whiteout had occurred on the playa; we found out later that Chris had been caught in it as he was riding.

Hooping it up at Bass Camp.

It was still windy and dusty during our somewhat eerie ride to Bass Camp, impressively designed to look like a Mayan temple right out of Indiana Jones. Another ride across the playa and soon we were at Disco Knights, an intimate dome where the dirtybird crew offered an antidote to the noise coming out of Root Society. Back at Nexus, Mr. C and Damian Lazarus were engaged in a tagteam session that started off strong with trippy, acid-tinged head music before losing the groove. During their set, the Tesla Coil that was housed inside The Galaxatron (a geodesic dome at the edge of the Nexus dance area) came to life and two performers played with 1.5 million volts of electricity. 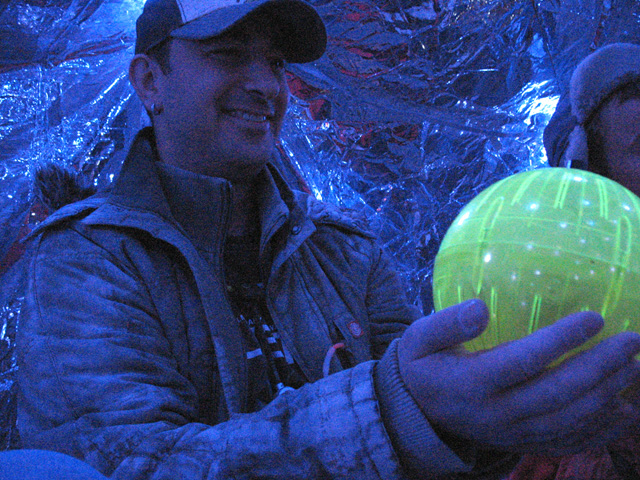 Dave is in control of Grand Mal.

We reunited with Team SF at Disco Knights and then rode out to Image Node’s Grand Mal, an art installation described as “”an interactive audiovisual geodesic dome.” Inside, visitors could lay down on mats and put on 3D glasses while a motion-sensitive control globe would trigger the interior strobe lights. The dome would emit an electrical BZZZT each time the lights flashed, which could be very slowly or rapid-fire, depending on how the globe was being moved. It’s hard to describe the effect, but if you watch the video clip on the Image Node site you’ll get the idea. 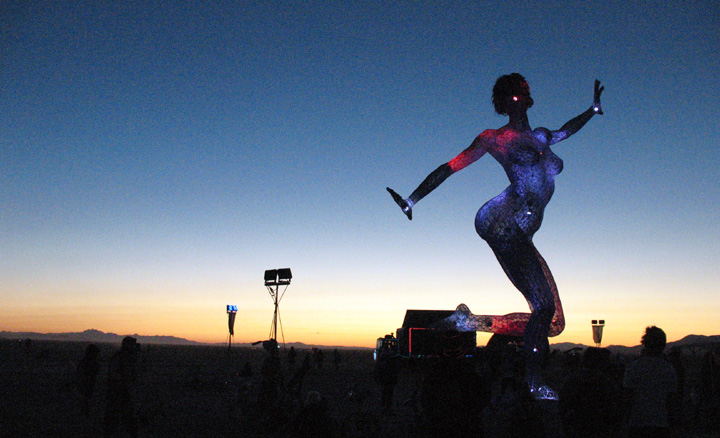 Chris and Scot decided to head back, but I stayed up with the SF crew. The next thing I knew, we were running after the Janky Barge to catch a ride out to Bliss Dance for an amazing sunrise gathering. While we were parked, an SF band with a wonderful female vocalist provided a beautiful downtempo soundtrack to the daybreak from Janky’s top deck. A champagne toast, hugs all around and a ride back to our bikes made for a sublime welcome to the day of the Burn.

NEXT: The Burning of the Man, The Process, the Temple Burn and Exodus