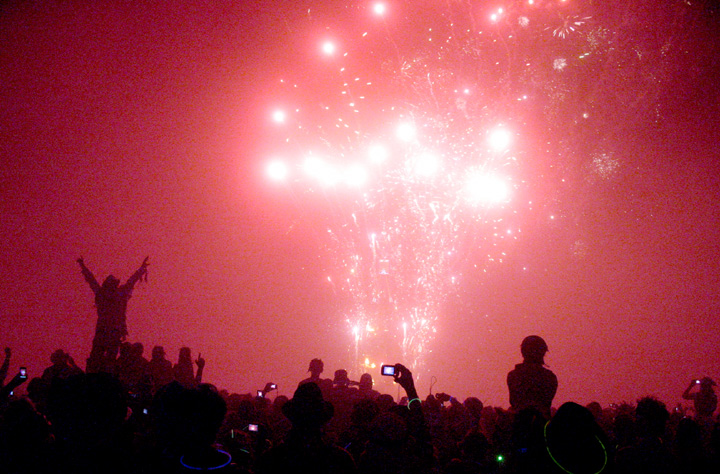 The following is Part 3 of a travelogue about my first trip to Burning Man. For those of you who stop by Thirsty in LA for cocktail- and spirits-related info and the like, feel free to skip this recap and return to your regularly scheduled booze blog. Otherwise, read on dear friends and fasten your seat belts, it’s going to be a bumpy night…

SATURDAY, 9/4: The Burning of the Man, FreQ Nasty and The Process
Thanks to several hours of whiteout conditions, we spent most of the day in our RVs, watching episodes of Lucy, The Daughter of the Devil and recovering from the previous night. And by “recovering” I mean drinking Bloody Marys made with Tito’s Vodka and plenty of Sriracha sauce. We had tortured our friends by endlessly quoting from Lucy’s Burning Man episode, so we were more than happy to show it to them so they could at least understand what we were talking about. 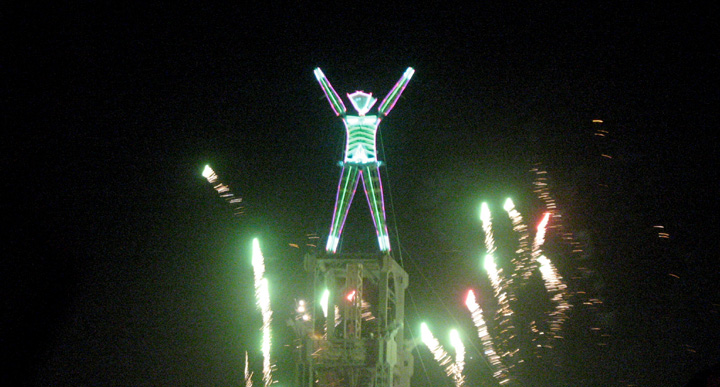 Night fell and it was time at last for the Burning of the Man. We locked our bikes on the Esplanade and began walking towards the Man, its arms raised as if to signal its imminent departure from this mortal coil. Any preconceived notions of what I thought was about to take place on this night soon disappeared. Thousands of Burners, hundreds of fire dancers and dozens of Mutant Vehicles surrounded the Man, the collective energy and anticipation growing to a fever pitch.

We ended up on the other side of the Man, near several MVs that continuously spit out huge fireballs. The Burn began in earnest with a spectacular fireworks display, one of the best I’ve ever seen. 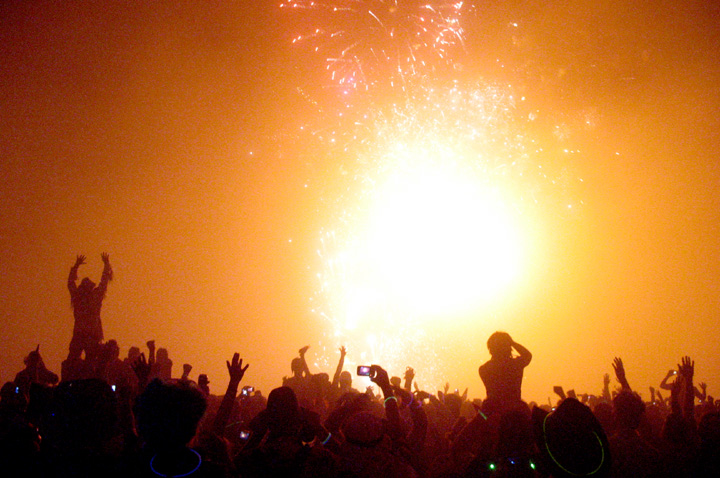 After an earthshaking explosion, a giant fireball erupted at the base and the Man was burning at last. After seeming to hang on for a little while, at around 10:10pm the Man suddenly fell, and the roar from the crowd echoed across the playa as it surged forward towards the Man’s burning remains. And now that the Man was gone, the night had truly begun.

Our first stop after the Burn was Tower of Babel, where DJ Dan was once again spinning a stomping set. While Chris hung out with some friends, the rest of us wandered around in search of some aural satisfaction. It wasn’t until FreQ Nasty took the stage at Root Society Underground that the night was officially ON. Reviews of his recent live sets have been mixed, but on this night he absolutely destroyed the Underground with a face-melting mix of breaks, dubstep, drum and bass, and electro. The crowd that filled the dome to capacity devoured every bit of the set, and FreQ whipped us into a frenzy that surpassed almost everything I’d seen that week. 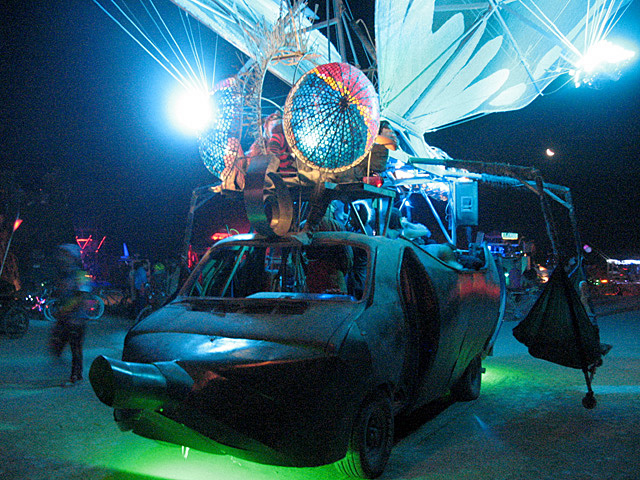 From there we made our way back to Nexus, where Dave and Amber would hang out while Scot and I checked out various Art Cars that were parked nearby. One in particular caught our attention, a bar called Letucia. As I waited my turn to fill my mug, the girl ahead of me told the bartender she didn’t have a cup. The bartender told the girl she had to go through “The Process” to get a drink. The bartender lifted her top and told the girl she had to “kiss the tits.” Then, she had to promise not to lose the cup she was going to give her. Having gone through The Process, the girl got her drink and a souvenir cup, to boot. After briefly considering “losing” my mug I handed it to the bartender for a really good tequila punch to go. 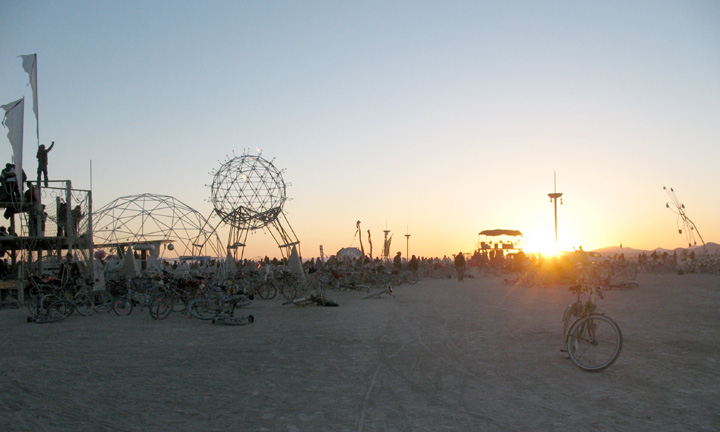 Back at Nexus we listened to a brilliant sunrise set by Nanda, who inspired us to return to camp, set up our sound and play an extended downtempo set that segued into a daytime tagteam session with me, Scot and Jochen.

SUNDAY, 9/5: The Temple Burn
After the tagteam session it was time to break down the shade structure and pack the RVs in anticipation of our departure early Monday morning. With that done, we rode out to Temple of Flux for the final event of the week. As we rode past the Esplanade and onto the playa, the void left by the Man’s absence was palpable; it was disorienting to look up and not see the neon landmark that helped us navigate all week. Many Burners had already left by Sunday night, so even before the ceremony had begun Black Rock City felt diminished, the primal energy of Saturday night’s mayhem a fading memory. 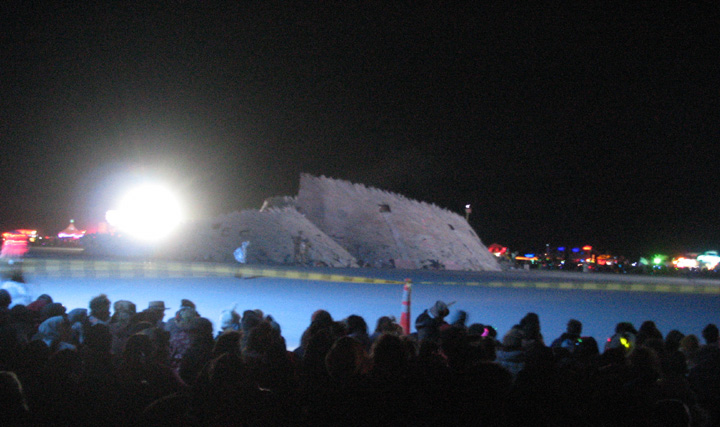 If the Burn is like New Year’s Eve or Fourth of July, then the burning of the Temple is more akin to a funeral pyre in its somber, reflective mood. Despite the size of the crowd that was seated around the Temple, it was very quiet. Even the Art Cars that were present didn’t have their sound systems turned on.

Instead of the pyrotechnics of the Burn festivities, the Temple was ignited without fanfare from somewhere within its walls. It burned slowly but steadily, and before long the wooden structures were fully engulfed. As tornadoes of fire and smoke spun off into the night, we could feel the intense heat despite our distance from the fire. Other than the crackling flames and wind, the only sounds that could be heard were occasional sobs and shouts from Burners overcome with emotion. 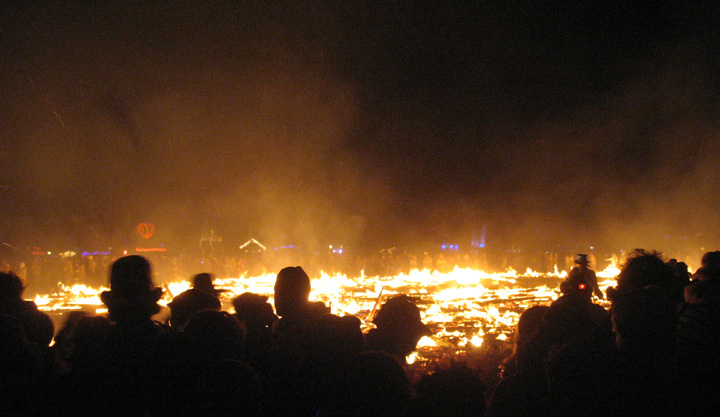 After the Temple finally collapsed and the fire died out, the caution tape came down and the crowd moved forward to look at the glowing, red hot embers. The ash and smoke were a bit much, so we didn’t linger and headed back to camp.

The Temple burn was an incredibly moving, emotional experience. The conversation was muted as we rode back to camp for our last meal in Black Rock City.

MONDAY, 9/6: Exodus and Back to Reality
Our last sunrise at Burning Man was occupied by the mundane tasks of packing everything up and making sure our campsite was clean. 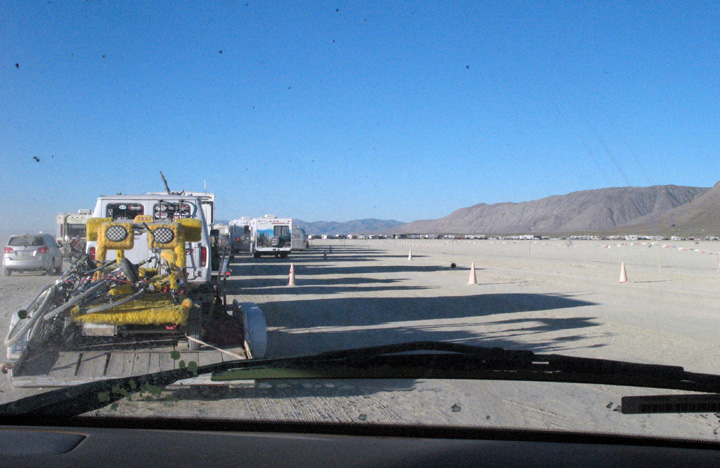 Exodus (as the mass exit from BRC is known) took two hours, from leaving our campsite to actually crossing the Main Gate. We’ve been told Exodus can last much longer, so once again we considered ourselves lucky. After one last look back, we were on our way. 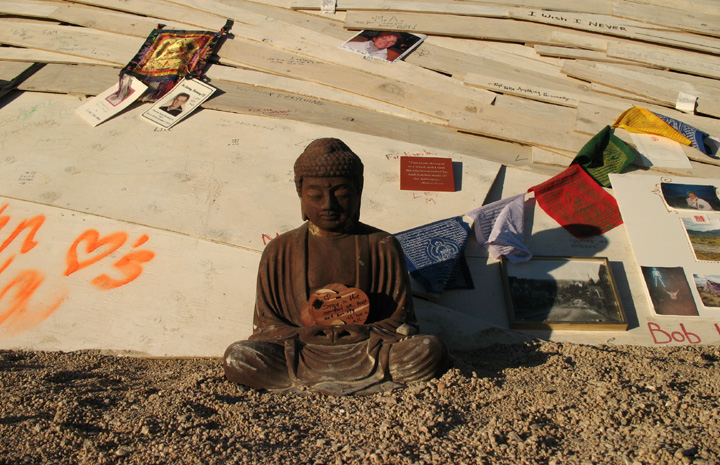 After looking at some of the excellent recaps and fantastic photo albums that have been posted, it’s obvious that despite everything that I saw and did, I experienced only a fraction of Burning Man’s vast array of sights and sounds. Even my own words and images feel woefully inadequate in trying to describe my week on the playa. But then, Burning Man is not about standing around and documenting it, it’s about going there with an open mind and jumping in with both feet.

Burning Man is definitely not for everyone. The time, effort and expense involved can be daunting. Unlike the mostly mild weather we experienced, conditions can be very harsh. There’s just no getting around the infamous playa dust; it’s been weeks since our return and I’m still finding it…well, everywhere. Yes, there’s public nudity, which you’ll either get used to or you won’t. If you’re not an electronic music fan, your music choices are frankly pretty slim. And as I hinted at earlier, the recovery and transition back to the “real world” takes time; I had incredibly vivid, occasionally disturbing dreams for weeks. 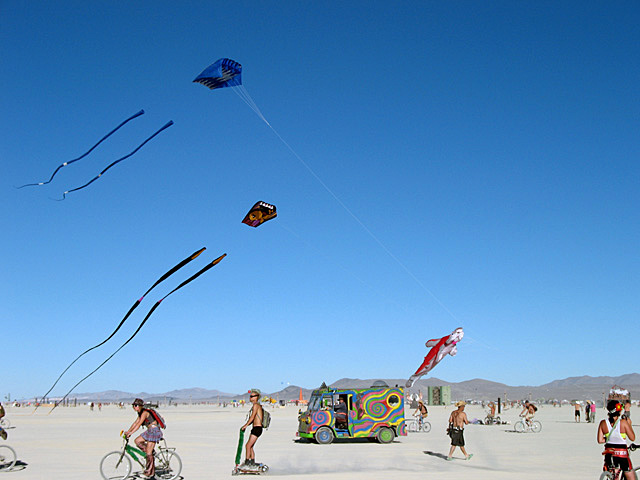 Even with all that, the upsides far, far outweigh the negatives. For me, Burning Man wasn’t life-changing so much as life-affirming. Spending a week in a community brimming with astounding creativity, generosity, and a pervasive, open-armed and friendly vibe was incredibly inspiring. There’s something about the thrill of discovery, about never knowing what you’ll see next that made every bike ride exciting: “Is that really a yacht on the playa?” “Look at those skydivers!” “And what the hell is THAT?”

Though you’ll make plenty of new friends in BRC, it’s your good friends, the ones you know you can count on, that you’ll appreciate the most. I couldn’t have asked for two better friends and traveling companions than Scot and Chris to go with on that journey. Literally and figuratively, I would not have made it to Burning Man without them. And of course, much love to Dave, Amber, Paul, Maya and Shea for being such awesome campmates.

People have asked me if I’ll go back to Burning Man. I tell them that every now and then, one thought seems to keep popping up: