Thirsty in Las Vegas: Hit Me with Your Best HARLEM Shot 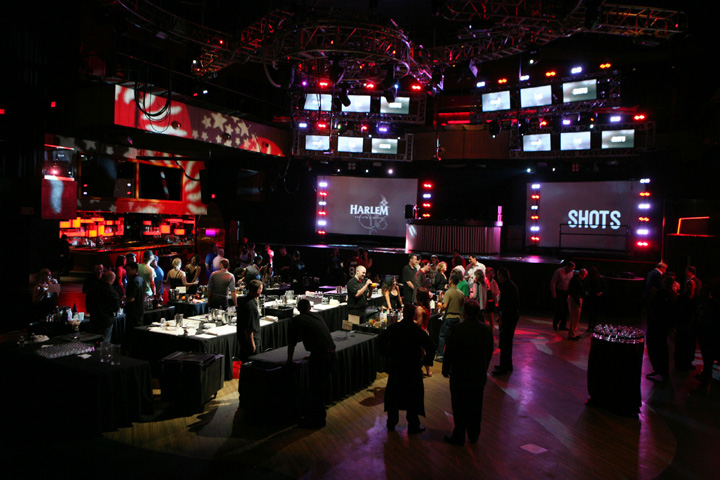 With over 300 years of distilling experience, it’s safe to say the Nolet family knows from spirits. Since assuming the role of chairman in 1979, Carolus Nolet Sr. assured his legacy with the worldwide success of Ketel One Vodka, introduced in 1983. The family distilling tradition continues with HARLEM Kruiden Liqueur, the brainchild of Nolet’s 10th and 11th generations (Carl Sr. and his two sons, Carl, Jr. and younger brother Bob). HARLEM is named for the historic Dutch city of Haarlem (where Nolet Sr.’s mother was born), while kruiden means “herbal” in Dutch.

Throughout September, HARLEM hosted competitions around the country, in which bartenders were invited to create two-ounce shots featuring the liqueur. Earlier this month, two winners from each city (Judges Choice and People’s Choice) were flown to Las Vegas to highlight their creations at the HARLEM Shot Showcase. I was invited to cover the event as part of a group of writers from 7×7, BourbonBlog, Complex Magazine, The Imbiber, Liquor Snob, MANjr, and Manolith.

The HARLEM Shot Showcase took place at Rain Nightclub, inside the Palms Casino Resort. Besides the showcase, hosted events were scheduled at other N9NE Group venues at the Palms, including Ghostbar and the world’s only Playboy Club. It’s a tough job, but somebody’s gotta do it. 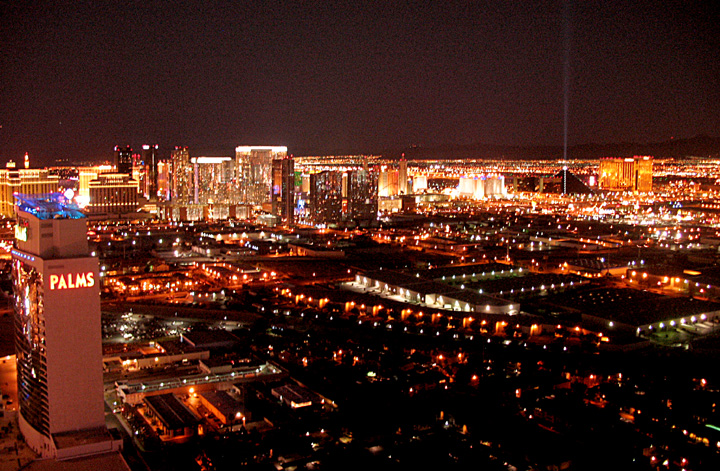 "Made it, Ma! Top of the world!" The view from the Palms Place Penthouse.

After checking into our luxury accommodations at Palms Place, everyone gathered in the Penthouse for a meet-and-greet of cocktails, dinner and copious tastes of HARLEM. The view of the Strip from the top floor was incredible, a nice backdrop as everyone got to know each other. A dispenser had been set up so that guests could help ourselves to chilled shots of HARLEM, which we enjoyed more than a few times.

When most people think of ice cold shots of herbal liqueur, the first thing that comes to mind is most likely Jägermeister, the evil elixir that launched a million college hangovers. HARLEM is seeking a young demographic, but it’s targeting a more sophisticated, post-college drinker that will enjoy two-ounce pours of the 80-proof liqueur and its myriad variations.

From my first sip I could tell that HARLEM is head and shoulders above its competitor. There is a richness and complexity that can be appreciated beyond slugging it down in a single gulp. Sipped neat, HARLEM (retail price $22.99 per 750ml bottle) made for a nice digestif at the welcome dinner. HARLEM offers notes of citrus, chocolate, blackberries and licorice without the medicinal quality that is so off-putting in lesser products. As I talked with the winning bartenders, it was obvious that HARLEM had inspired an impressive collection of recipes.

Along with the HARLEM, we also sampled Nolet’s Silver Dry Gin, a superb release that we enjoyed neat as well as with a splash of tonic or soda. The purpose of ths trip was to get acquainted with HARLEM, but any time the Nolet gin was mentioned eyes would light up. Though best known for Ketel One, the Nolet family was previously famous for their gin,  including the production of Ketel 1 Jenever for the Dutch market. The Nolet’s Silver is another collaboration between Nolet’s 10th and 11th generations, a modern gin designed specifically for the mixology realm of classic cocktails and signature creations. Three ingredients separate the Nolet from a standard London Dry: Turkish Rose, white peach, and fresh raspberry. Stay tuned, Nolet’s Silver Dry Gin is going to get a lot of attention.

After the welcome dinner, we headed to the Palms and our hosted table at Ghostbar. Although the 55th-floor view was amazing and the weather was perfect, I was feeling the itch to explore Sin City. Jake from Liquor Snob was up for some shenanigans, and after asking around, L.A. bartender Dan Long (a Las Vegas native) suggested Frankie’s Tiki Room, a place I had first read about in Imbibe.

As Jake and I walked through the casino to catch a cab, we came upon a sight that was unusual even for Las Vegas: a group carrying and then laying down a long string of beer cans that were taped together. Jake told me it’s a drinking game called Wizard Staff. In this case the Wizard Staff was a week’s worth of beer cans, connected end to end. Ah, kids these days…

Frankie’s was just a short cab ride away from the Palms, and soon enough we were inside a 24-hour South Seas den decorated with giant tikis and puffer fish lamps. The extensive menu was filled with Frankie’s originals and traditional tiki drinks. The potency of the drinks were illustrated with a “skull scale,” with five skulls being the strongest.

Filled with HARLEM-fueled bravado, Jake and I both ordered a five-skull cocktail. I went with the legendary Zombie (limit two per customer), a “lethal combination” of rums and juices, garnished with a pineapple wedge. Jake had a Frankie’s original called the Fink Bomb: coconut and 160 proof rums, melon liqueur and pineapple juice. The menu warns customers that the Fink Bomb “will kick your ass.”

As if these deadly libations weren’t enough, we went for another round. We both ordered the Thurston Howl, a four-skull concoction of rum, brandy, gin, pineapple juice, grapefruit juice, cinnamon syrup, ginger syrup and papaya nectar. Hazy memories of disturbing videos looping continuously on the flatscreen behind the bar can either be blamed on the Thurston Howls or some bartender’s twisted sense of humor.

The Main Event
Thankfully, no events were scheduled until the next afternoon, when it was time for the HARLEM Shot Showcase, presented by HARLEM and The Tasting Panel. Rather than staging an NCAA-style single elimination tournament, HARLEM wanted every bartender to feel that they had already won just by being there, hence a showcase format instead of a competition. The winning bartenders couldn’t actually make their own shots, though. Instead, local Las Vegas bartenders did the honors, with the shot creators on hand to supervise and chat with the media. 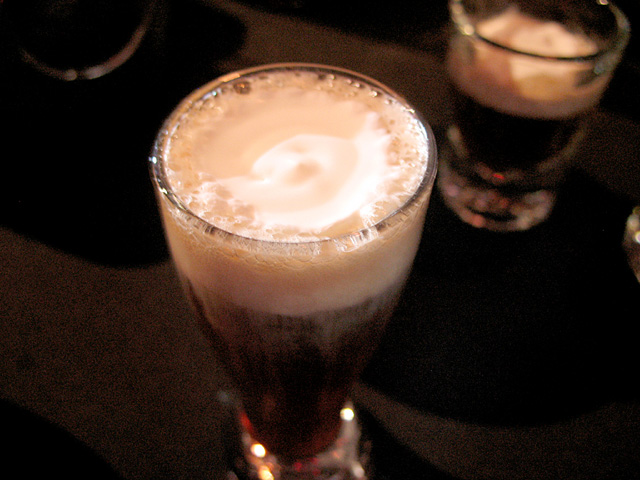 With Frankie’s Thurston Howl dropping anchor on my temples, I made a beeline for the Los Angeles Judges Choice, the Harlem Express by Dan Long (First & Hope, STK). Long’s ode to the Black and Tan was excellent, among my favorite shots of the day. It was also just what I needed to kick start my tasting through the showcase. 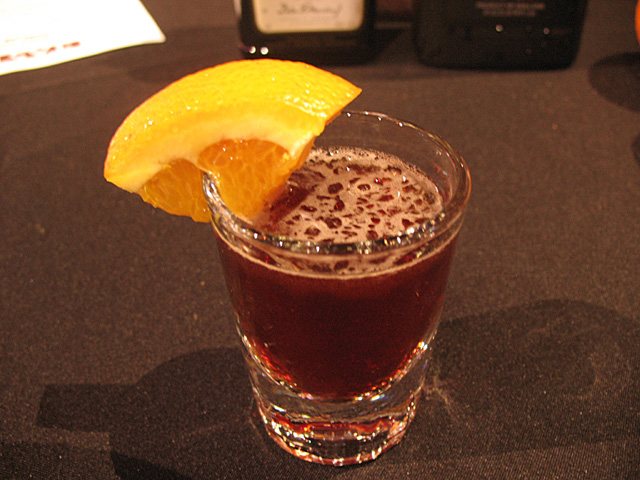 Blood for Harlem by Jaren Singh

Another standout was the Judges Choice from Orange County: Blood for Harlem, a Blood and Sand variation by Jaren Singh of Stonehill Tavern.

Andrew Record (Hacienda del Sol) gave an artful spin to his Harlem Renaissance, the Phoenix Judges Choice. From the New York-based African American cultural movement of the 1920s and 30s, Record took “Renaissance” to refer to the European cultural movement that began in Italy, a nod to the limoncello in his shot. The rosemary that infused his simple syrup was picked from a hundred-year old plant on the resort grounds. Record said he serves the Harlem Renaissance as a toddy.

Tasting through the various shots was a perfect demonstration of HARLEM’s complexity and versatility. The winning shots highlighted a variety of HARLEM’s flavor notes and it paired well with a range of ingredients, everything from pumpkin and fall spices to fresh juices, chocolate and espresso, and a number of different spirits. The standout shots were creations I’d likely enjoy as full size cocktails, and underscores HARLEM’s potential in the mixology repertoire. This isn’t HARLEM’s focus but certainly worthy of exploration. 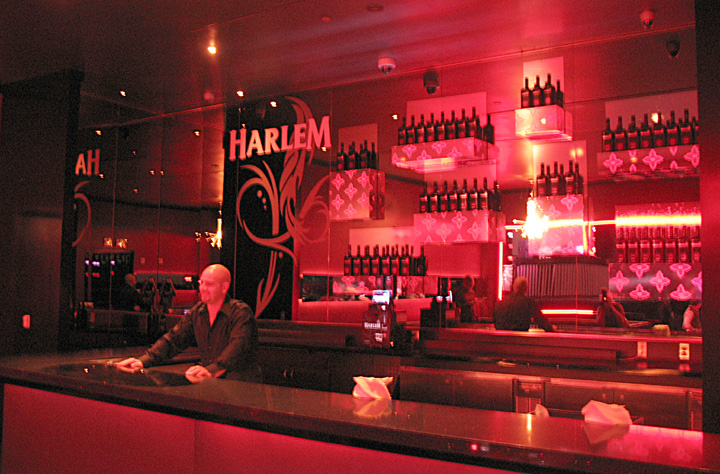 The HARLEM VIP Room at Rain

The showcase also served as a sneak preview of Rain’s HARLEM VIP Room, which debuted just a few days later. The VIP room serves the brand’s signature shot, The Slamsterdam, in addition to a range of cocktails made exclusively for HARLEM.

A full list of winners and their recipes can be found at the HARLEM Shots Blog.

But Wait, There’s More
The showcase was over, but we still had a full night ahead of us. The first stop was a Monday Night Football party at the Playboy Club, also located in the Palms. This was an optional event, but my journalistic need to document everything about the trip demanded my presence. 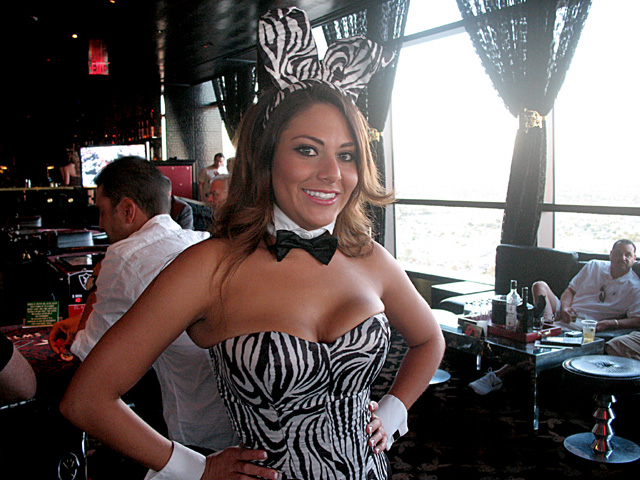 "Are you ready for some football?"

It was pretty much everything you’d expect. Suffice to say, sipping on America’s Native Spirit with Tom Fischer (BourbonBlog’s host and producer) and Jake was a relaxing way to unwind from an arduous day of sampling HARLEM shots. Oh, and best bathrooms ever.

TAO at the Venetian

After a disco nap, we were off to a group dinner at TAO, the Asian restaurant and nightclub located in The Venetian. Inside the spectacular restaurant, we were led upstairs to the Loft House and our private dining area above the floating Buddha. From the drink menu (featuring HARLEM and Ketel One, of course) I had Eddie’s HARLEM & Ginger, a bracing cocktail made with HARLEM, ginger ale and a squeeze of lemon. Several rounds of Slamsterdams were also downed during the multi-course, pan-Asian meal.

From there it was off to our final hosted event at XS, the nightclub at Encore. Victor Drai’s aptly named club is an extravagant, 40,000 square foot venue that boasts two clubs in one: an indoor dance floor with VIP tables and multiple bars, and an outdoor setting with a pool, cabanas and gaming. There really is something for everyone at XS; more than one person in our group gave it a go on the light fixtures / stripper poles.

As the nightclub began to fill up, it was easy to take in all the spectacle from our table. But then, wanderlust began to take over once again. On this excursion, Jake and I were joined by Andrew Record and Allie of 7×7. I suggested a visit to the Downtown Cocktail Room, an intimate lounge located off Fremont Street. I had a feeling the others would enjoy the quiet ambiance and craft cocktails, and my instincts were correct. The excellent drinks and good company made for a nice conclusion to our Las Vegas trip.

Disclosure: airfare, accommodations, and hosted events were provided by HARLEM. 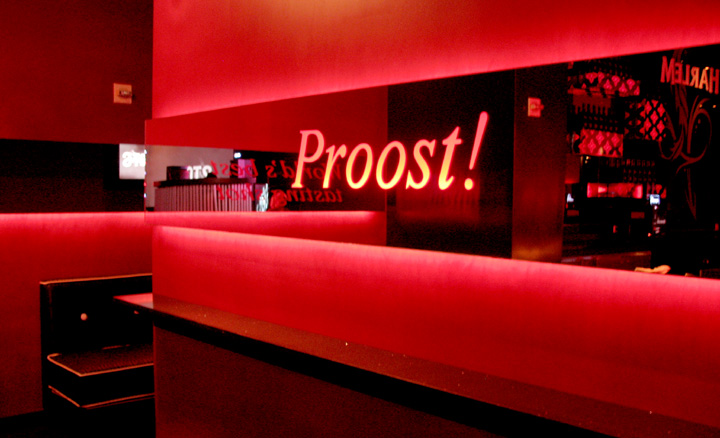