Tasting the Glenfiddich Range at the 2010 Esquire House 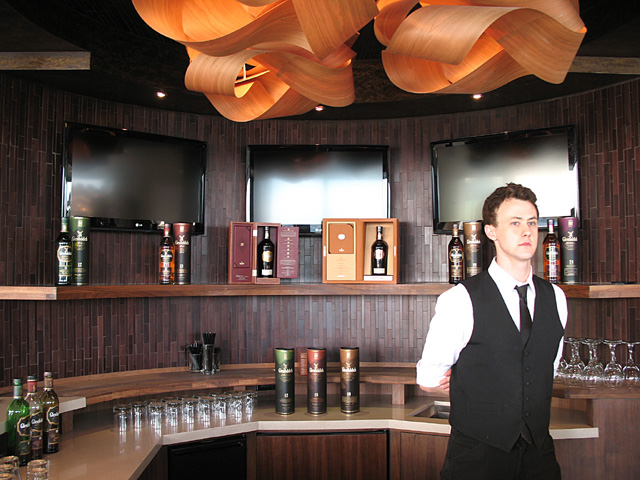 Last month, the eighth iteration of Esquire magazine’s Signature Space program debuted in the “Bird Streets” of the exclusive Doheny Estates in the Hollywood Hills. Elaine Culotti (Porta Bella Design) and a team of top designers rebuilt a family home from the ground up, transforming it into the 2010 Esquire House, a contemporary indoor-outdoor lifestyle property. Dubbed “The Ultimate Bachelor Pad,” the 8,600 square foot home features 11 rooms, nine baths and a two-story pool house, with each room sponsored by a different Esquire advertiser. Since the first Esquire House debuted in 2003, the Signature Spaces have alternated each year between New York and Los Angeles. 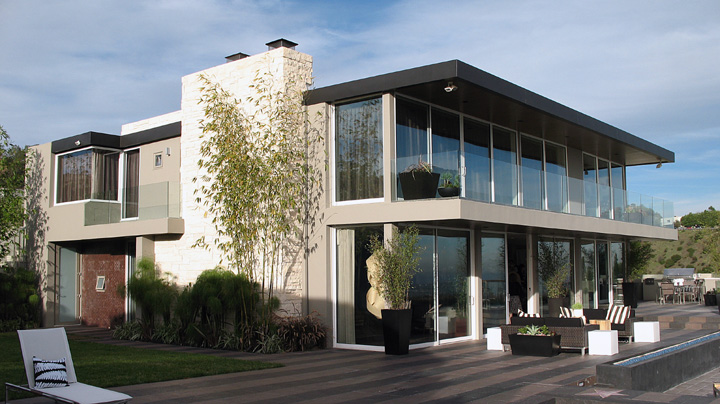 There is substance to go with the jet set style of the Esquire House, which each year is the site of several star-studded charity events. The October 15th launch party was a benefit for International Medical Corps, hosted by Sienna Miller. “Songs of Hope VI,” featuring a silent auction and live acoustic performances by the Doobie Brothers, Kenny Loggins, Randy Newman and more, took place on November 4th to benefit City of Hope. Still to come are events for Oceana and Oxfam America.

On a recent Friday afternoon, the Esquire House opened its doors for a tasting and tour hosted by Glenfiddich, part of a series of VIP tasting experiences that took place in New York, California and Dallas. Hosted by Glenfiddich Master Distiller Brian Kinsman, as well as regional Glenfiddich Ambassadors, the tasting events coincided with the introduction of the Glenfiddich One Day You Will advertising and marketing campaign that launched in October.

“As a whisky that has always been at the forefront, we at Glenfiddich are proud to be constantly pushing the envelope for the single malt category,” said Caspar MacRae, Category Director – Scotch Whisky, William Grant & Sons USA. “This new campaign and creative speaks directly to our target consumers, a group of individuals who strive to make the most of life’s adventures, invoking the pioneering spirit that is at the heart of Glenfiddich and rousing them to pursue their dreams.”

A painting by Jean-Michel Basquiat, in the Great Room.

After a short shuttle ride from Sunset Blvd, guests entered the Esquire House and walked into the Great Room, designed by Elaine Culotti for Hugo Boss. Culotti took inspiration from the clothing line and incorporated the brand’s textiles into her design. The sectional couch, dining room chairs, and barstools all feature winter cashmeres from Hugo Boss, along with other exclusive fabrics. Standout pieces include an eight-foot-long painting by Jean-Michel Basquiat and a collection of 18th century swords and sabers. Immediately ahead was a panoramic view of the Los Angeles skyline so breathtaking one could almost miss the circular bar and the tasting glasses of Glenfiddich. Almost.

We helped ourselves to drams of the Glenfiddich 12 Year Old and then walked outside to the expansive Terrace, designed by Kyle Schuneman (Live Well Designs) for DonQ Rum. Schuneman says he wanted to create “a sexy outdoor area that sets a backdrop for a real, authentic good time in the L.A. sun—or nighttime cityscape. To me, the brand is all about ‘real fun,’ and so that is where it started.” Of the outdoor furnishings, he says that DonQ’s “masculine colors of gray, black, white—with pops of blue—were a big jumping-off point for the design. The materials are natural woods, teaks, and stainless steel to really add a young, hip vibe.”

MacRae welcomed us and then introduced Laurel Chrumka, who would lead the guided tour through the Esquire House. Along the way, we would taste through the Glenfiddich range in key rooms of the property, culminating with a dram of the Glenfiddich 40 Year Old. Chrumka told us that the property is indeed for sale, for $18.9 million. No comment on whether the Basquiat is included in the purchase price. 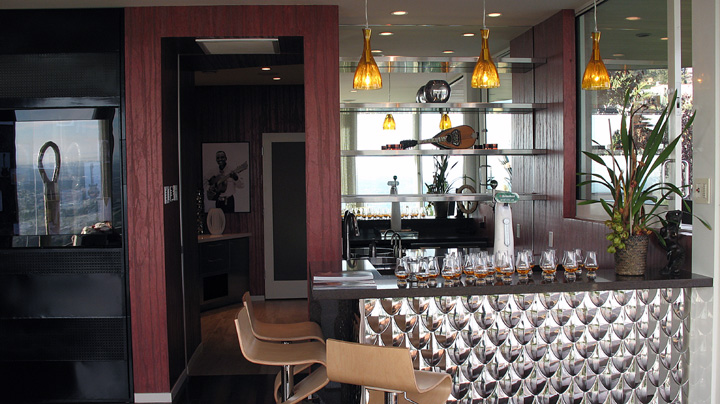 Drams of the Glenfiddich 15 Year Old await tasting in the Music Lounge.

From the Main House we entered the first floor of the pool house and gathered in the Music Lounge, designed by Lisa Delena (Lisa Delena Design) and Obscura Digital for Heineken. To create the design for the asymmetrical space (no two walls are alike), Delena took inspiration from rock ’n’ roll clothing, concert staging, and musical instruments. A vintage mandolin (showcased on the shelves above the bar) inspired Delena’s color and material palette, while a custom leather banquette is shaped like the head of a Fender guitar. The Music Lounge is near the infinity pool and hot tub, overlooking the city. After all, this is the Ultimate Bachelor Pad. 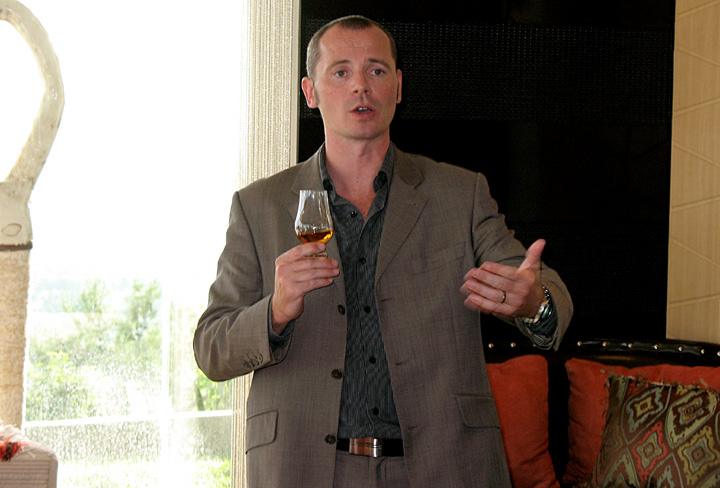 Glenfiddich Ambassador Mitch Bechard led us through a tasting of the Glenfiddich 15 Year Old, an expression created using the Glenfiddich Solera System. During the Solera process, the 15 year old malt is matured in three different types of oak cask: sherry, traditional bourbon and new oak. The whisky is then brought together in the wooden Solera Vat, which is kept at least half full to ensure a consistent, balanced single malt. The process is completed by a settling period (marrying) in smaller Solera Tuns. The resulting whisky conveys notes of sweet honey, vanilla and raisin, a silky, rich palate of sherry and spices and a long, sweet finish.

After a visit to the fully functional, state-of-the-art Recording Studio upstairs, it was back to the Main House and the Master Bedroom, located on the second level and designed by Annette English (Annette English & Associates) for Salvatore Ferragamo. Here we sipped the Glenfiddich 18 Year Old, matured in Oloroso sherry casks and traditional bourbon casks. The 18 Year benefits from a touch of sweetness from the sherry wood, balanced by the oakiness from the traditional casks. The nose is rich with baked apple, cinnamon and oak; notes of dried fruit, citrus peel, dates and a hint of smoke are on the palate. The finish is warm and long. 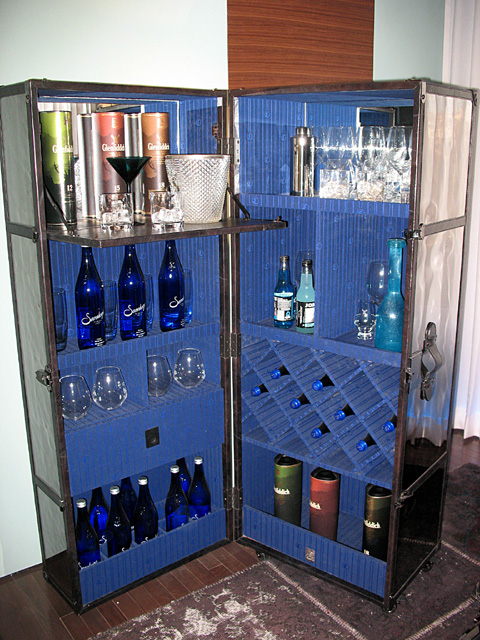 “Our inspiration came from Ferragamo’s strong Florentine heritage and its unique ability to reinvent age-old trades and materials,” says English. “We incorporated these into our space by taking traditional elements of a room interior and reinventing them in a completely new way.” As a nod to Ferragamo’s craftsman history, English uses handmade materials throughout the space, such as the glass installation that forms the bed’s headboard.

Down the hall is the Office, by John Everage (Everage Design) for Esquire Home. Designed with input from Esquire Editor-in-Chief David Granger and Fashion Director Nick Sullivan, the Esquire Home line is inspired by men’s wear and reflects the magazine’s passion for fine spirits. Pieces are named after classic cocktails (e.g. the Martini Armchair and the Clover Club Barstool), while Don Draper himself would likely do his “office work” with the Manhattan Bar, a steel trunk with compartments for liquor, wine, glasses, and tumblers.

We were then seated in the nearby Media Room, designed by Amy Matthews for DIY Network. While we were blinded by the sun streaming into the space, automated blackout shades lowered and Bechard led our tasting of the Glenfiddich 30 Year Old. The nose has a substantial oakiness, and intense fruit and sherry notes. The complex, woody palate is enhanced by a sweet floral quality, and the honeyed finish is quite long and velvety.

The Media Room is actually two bedrooms and baths that were gutted to create the new entertainment space. Banks of flatscreens line two walls, while rows of captains chairs are set on a carousel that rotates the seating to face one wall or the other, depending on what media is going to be engaged. Matthews explains her concept: “It’s about creating a high-technology space that is also comfortable and dynamic—on a turntable that brings the media to the participants rather than the participants to the media!”

MacRae welcomed us to what he nicknamed the “Blofeld Room” and introduced Glenfiddich Senior Brand Manager David Bitran, who showed us videos from the One Day You Will campaign. A montage of time-lapse urban scenes and soaring land and seascapes were set to The Temper Trap‘s “Sweet Disposition,” and as overused as that song is, the desired inspirational effect is still achieved. As Bitran mentioned, it’s a far cry from the typical staid ad campaign with a Scotch bottle on a black background and a list of awards. 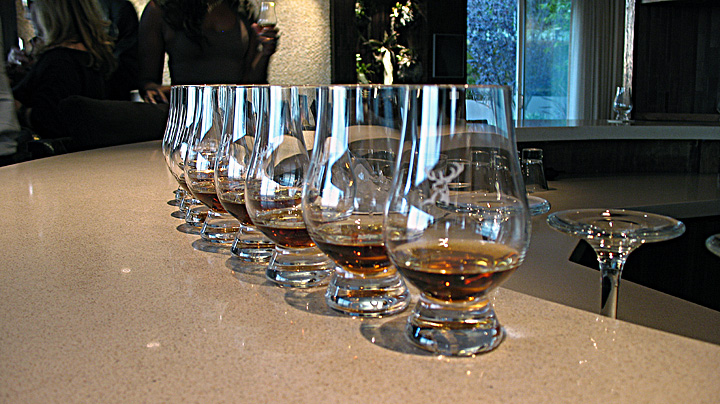 Then it was back downstairs to the Great Room, and the climactic tasting of the Glenfiddich 40 Year Old. This year marks the sixth release of the Glenfiddich 40 Year, with only 600 bottles available worldwide at a retail price of $2,799 per bottle. Just by looking at the dark mahogany drams that were lined up at the bar, it was apparent that we were about to encounter a remarkable spirit. As the sun began to set we gathered on the Terrace, where Bechard introduced Brian Kinsman, who led us in a tasting of the 40. 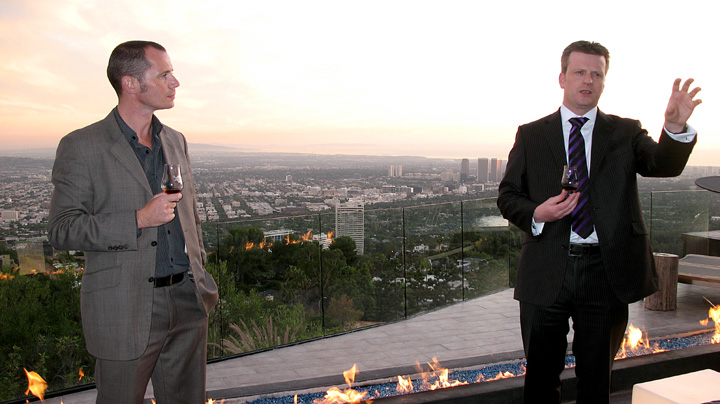 The nose is beautifully rich and aromatic, with layers of dried fruits, dark chocolate, roasted coffee and black cherries. Hints of smoke, leather and cloves were also present. As the dram opened up the nose evolved, to the delight of guests who shared their thoughts. The palate is rich with intense flavors of dried fruit, dates, raisins and apples. Then, oak notes appear with hints of bitter chocolate and a little bit of peat. The finish is incredibly long and complex.

And with that, it was sadly time to leave the Esquire House before they released the hounds. As we waited for the shuttle to arrive, I asked the bartender for a dram of the Glenfiddich 21 Year Old, an expression that wasn’t part of the tour. The 21 Year completes its maturation process in casks that previously held Caribbean rum. The nose is an intense vanilla, with sweet and floral notes, hints of banana, figs and toffee. The palate has notes of pepper, smoke, oak, ginger and spices. The finish is very long, warm and spicy.

Thoughts of missing the shuttle were dismissed and we were whisked away, down the hill to the Sunset Strip and back to reality.

A slideshow of 9280 Nightingale Drive before the renovation: http://www.9280nightingale.com/

Glenfiddich 12 Year Old
The Booze Fairy must want me to get started on achieving my dreams, because not long after the Esquire House tasting, a bottle of the Glenfiddich 12 Year Old, the expression that kicked off the tour, arrived on my doorstep. Glenfiddich notes that the 12 Year is “the world’s favorite single malt Scotch whisky,” aged for at least 12 years in oak barrels before it’s bottled and exported to over 180 countries around the world.