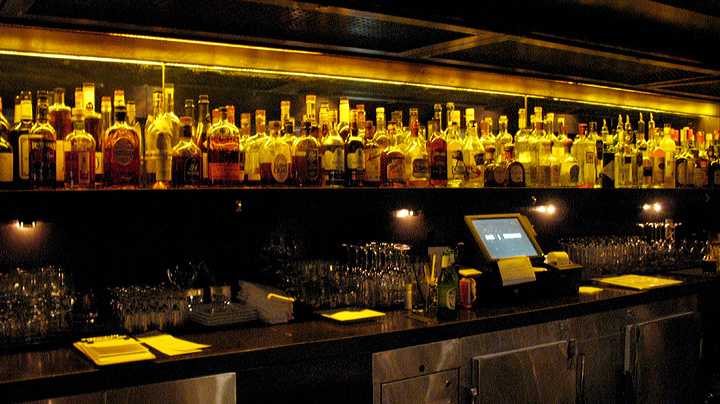 The bar that puts the "bar" in Bar | Kitchen.

When the O Hotel sent out a call for proposals to revitalize its restaurant and bar, Azzi Kashani (Director of Sales and Events) contacted David Kaplan and Alex Day of Proprietors LLC and suggested they throw their hats in the ring. Kaplan (co-founder and co-owner of New York’s acclaimed Death & Company) and his business partner Day (a former Death & Co. bartender) were initially hesitant about potentially consulting on a project that they weren’t involved in from Day One. Nevertheless, they submitted a proposal…and pretty much forgot about it as they turned their attention elsewhere.

Two months later, Kaplan and Day were told their proposal was accepted and they were scheduled to take over the O Bar & Kitchen on October 1st. Which would have been no problem, had their start date not been just two weeks after they were notified. To make matters even more difficult, Day was going to be in Asia for the first ten days of the month, consulting on Hong Kong’s Lily & Bloom, among other projects. And to top it off, dine LA was scheduled for the first two weeks of October.

Undaunted, Kaplan and Day took on the challenge of re-inventing a restaurant that had struggled, despite the hotel’s consistently high occupancy rate and a talented Executive Chef, Vahan Tokmadjian. The duo kept their re-design and management of O Bar & Kitchen well below the radar, which lead to rampant speculation as to the nature of their L.A. project. Once the newly-christened Bar | Kitchen was ready for its close-up, Caroline on Crack broke the news on Squid Ink, and Aaron Tell (The Savory Hunter) quickly followed with a mouth-watering review. 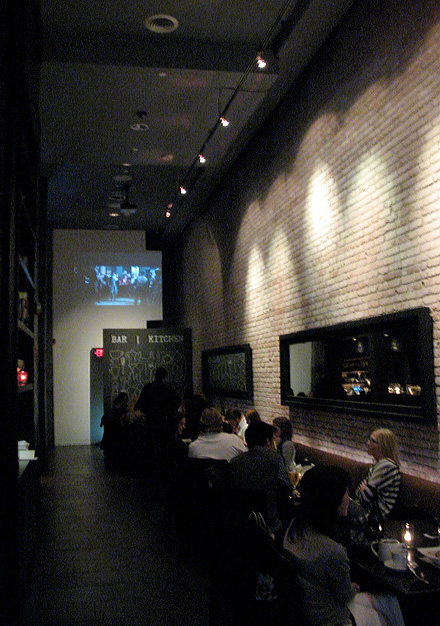 Just before the holidays, I was invited to visit Bar | Kitchen for a hosted tasting of the new food and cocktail menus. I had been there once or twice in its previous incarnation, but I didn’t remember much besides its vivid color scheme and Tokmadjian’s well-executed food. Just past the lobby fireplace, Bar | Kitchen’s understated interior is now much closer to the rest of the boutique hotel’s modern, urban design. Undeterred by a steady rain, guests filled all of the main dining room’s 60 seats throughout my visit.

As I sat at the bar and looked over the menus, Kaplan explained that with Bar | Kitchen, he and Day wanted to create a place they would want to hang out at themselves. A keyword that kept popping up was “affordable.” With its daily lunch and dinner prix fixe menus ($18 and $28, respectively) and $10 cocktails, Bar | Kitchen definitely hits the mark.

Even better, during happy hour (4-7pm) a couple of the drinks are just $7 each, and selected bar bites are $4. More bargains can be found in the half-priced bottles of wine on Monday and Tuesday, at lunch and dinner. And if you’re in the industry, you’re in luck: Bar | Kitchen is offering $3 Fernet shots and a 20% discount on food to anyone in the business.

Although Kaplan and Day were keeping their consultation under wraps, they reached out to their industry contacts to begin the menu overhaul. For spirits, they worked backwards from a list of their own favorites. The wine list is overseen by Day, who said that seeking out boutique vineyards is his current passion. He noted that the wine menu is written to “strip away the pretension,” as in this straightforward description of the Malbec: “big wine with serious personality, for lovers of hearty styles – drink me with rich entrees.”

An existing Death & Co. relationship led to Bar | Kitchen using In Pursuit of Tea, but nothing seemed to excite the crew more than the debut of the Intelligentsia coffee program. Day showed off the shiny new coffee station the way an A/V enthusiast would rock his new surround sound system. 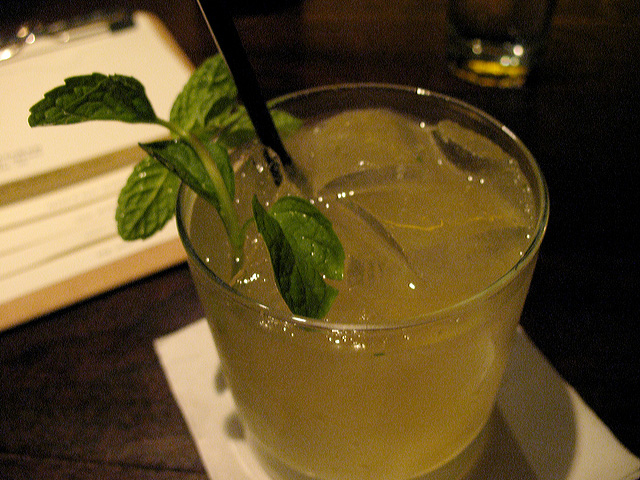 The current drink menu is a basic list of four cocktails. Although Bar | Kitchen isn’t intended to be a craft cocktail bar like Death & Co., with Proprietors LLC managing it, it’s to be expected that the bar program will be top notch. I started with the Smokescreen, made with Bowmore Legend, fresh lime juice, a dash of green chartreuse and fresh mint. The Islay single malt anchors the cocktail with enough smoke to offset the acidity of the lime juice, and a hint of the chartreuse for depth. A great start to the menu tasting.

Though Kaplan and Day didn’t actively seek bartenders from New York, word about their consulting project trickled out, and among the new hires is Athena Freedlander, formerly of Gramercy Tavern. The home team is represented as well; my bartender during the tasting was Alyssa Swanzey, who was previously at Fraiche. 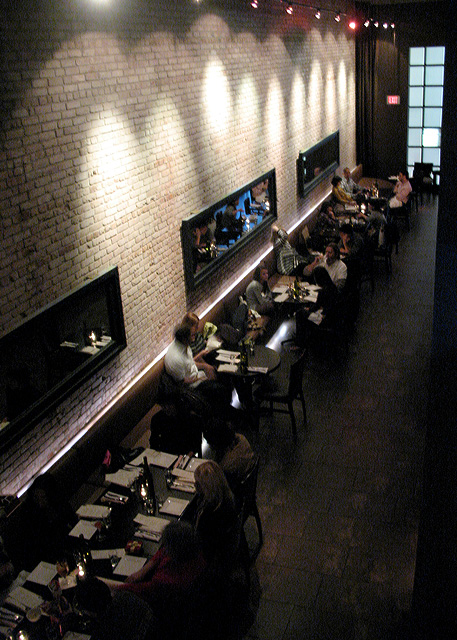 The view from the mezzanine.

An integral part of the new Bar | Kitchen is of course Chef Vahan Tokmadjian, who has been in the kitchen since the hotel’s 2007 opening, despite nine manager changes. The duo worked with the former Noé sous chef to create what Kaplan calls a “comfort-driven” menu, featuring market fresh ingredients and seasonal American cuisine, with a bit of Spanish influence. Portions are medium to large, enough to satisfy most appetites yet allowing guests to sample through the menus. Night owls take note: the kitchen is open until 11pm Monday through Wednesday, and til 12am Thursday through Saturday. Hotel guests have the option of ordering from Bar | Kitchen through in-room menus, something of a room service – takeout hybrid.

I chose one of the Mains, and Kaplan suggested that I start with a couple of Shared Plates. With my order placed, Kaplan led me on a walkthrough to talk about how far the space has come in the last two months. Considering the short timeframe and limited budget, Bar | Kitchen could easily be a case study in Restaurant Renovations 101.

Some of the design changes are easy to see: the blue and gold mirrors along the brick wall in the main space are now monochromatic, and the curtains that previously draped the wall are gone. A darker palette and plentiful candles give the restaurant a warm vibe. Kaplan drew on his fine art background (pun intended) to create the decorative artwork on a large chalkboard, while menu items are written on another one above the bar.

Due to its high ceiling, the long and narrow main room feels somewhat cavernous. To give the space a sense of intimacy, custom drop lights will be installed above the dining tables. The lights were sourced from a designer who’s worked with 213 Nightlife.

Bar | Kitchen’s open floor plan presented a unique challenge. Because the restaurant space flows into the lobby, the entrance (shared by the front desk and Bar | Kitchen) has to remain open 24 hours. The bar inventory would be too inviting a target, but emptying and restocking the shelves every day was out of the question. The solution was to install drop cages, which swing out of sight during operating hours.

As we headed upstairs, Kaplan showed me a room that’s been dubbed the Room of Requirement, an office so stunningly garish even Caligula would have thought it was too much. Coming into an existing venue means constant surprises like this room, which thankfully remains inaccessible behind a locked door. 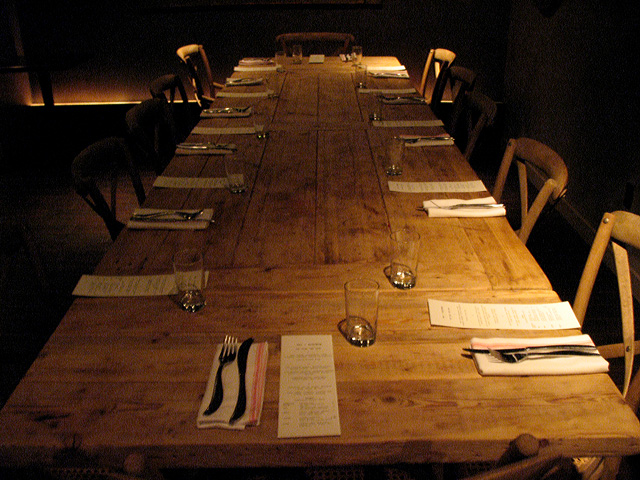 The communal table in the private dining room.

A private dining room is located past the mezzanine lounge, which overlooks the main space. The night of my tasting, a party of 20 guests had booked a dinner event, and to my surprise I never noticed them. (A lobby elevator offers discreet access.) Also available for special events is an intimate VIP room, with a private bar and dining area.

For Kaplan, a self-described “perfectionist,” his attention to detail is evident. Menus are given a tactile quality by printing them on tiered sheets and presenting them on clipboards. Staff “uniforms” are low key and informal, while the soundtrack (which guests have complimented) is curated through Pandora. 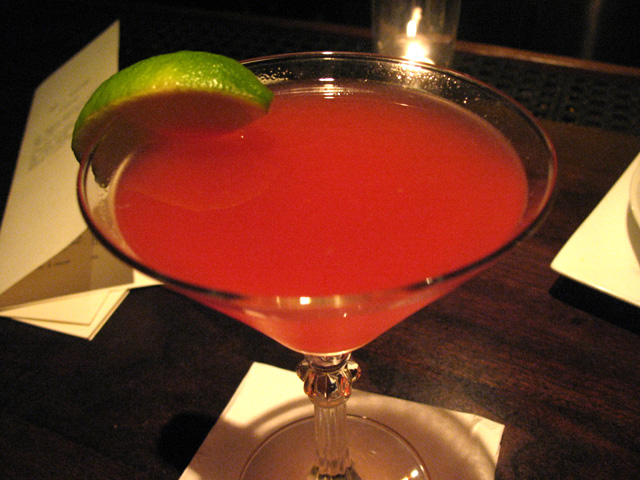 Then it was back to the bar for Round Two, the Restoration Road: blanco tequila, fresh lime juice, Cointreau, Lillet Blanc, and raspberries. The fruit forward, sweet Restoration Road was a perfect accompaniment for the appetizers that soon arrived. 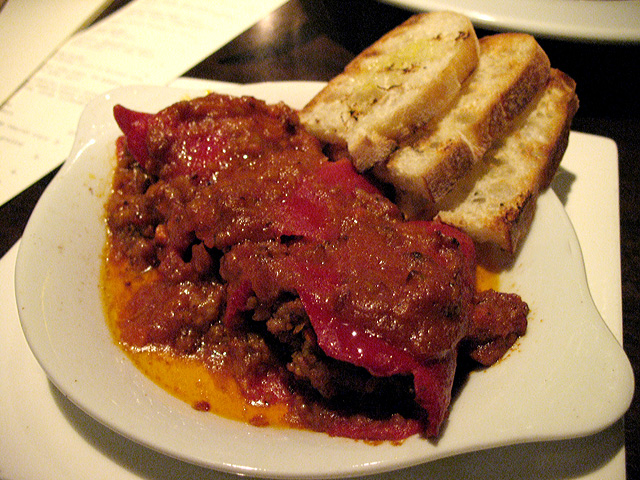 First were the Stuffed Piquillo Peppers, with Italian sausage and spicy tomato sauce ($8). Diners who don’t like too much heat may want to skip this feisty appetizer, but I enjoyed the nice kick from the sauce.

From texture to temperature, the White Anchovy Bruschetta with celery gremolata ($6) offered a nice counterpoint to the stuffed peppers. The anchovies are front and center, contrasted by the crunch of the bruschetta and the zesty gremolata. 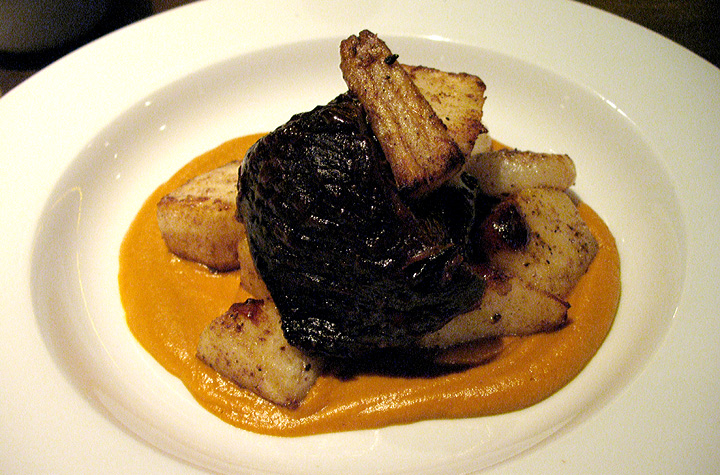 My entree was the Braised Beef Short Ribs, with seasonal root vegetables and roasted carrot puree ($19). The fork-tender beef was excellent, the vegetables were perfectly cooked, and the carrot puree was flavorful but not overly rich. The hearty dish was just what was needed on a chilly, rainy night. 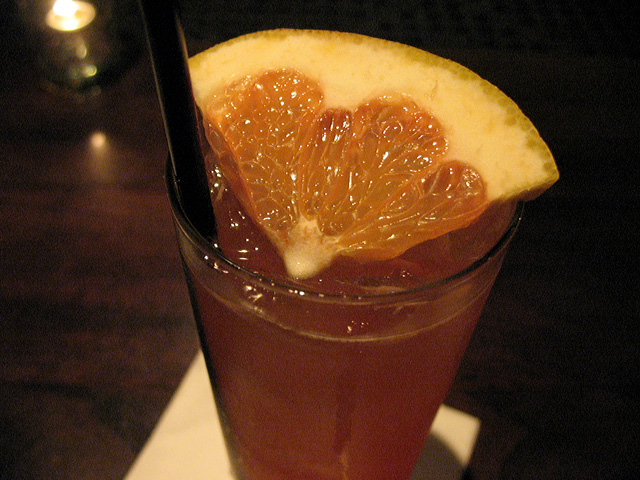 I finished with a Site Hound, a bright and refreshing Greyhound variation made with gin, Aperol, fresh lemon and grapefruit juices, and seltzer water. 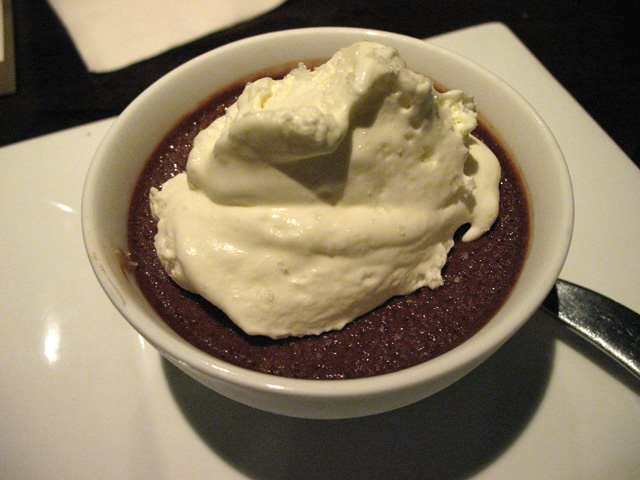 Kaplan sent out the Chocolate Pot du Crème with whipped cream and fleur de sel, and while I’m not one for desserts, this was definitely one I’ll be ordering again. It’s not too sweet or heavy, and the sea salt subtly enhances the chocolate with each spoonful. 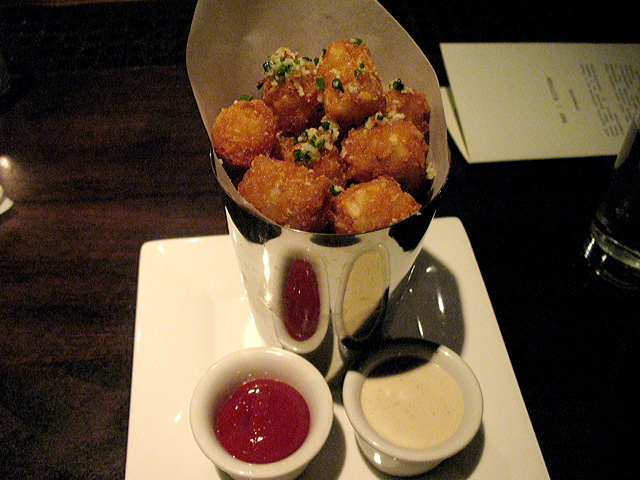 The addictive Parmesan Truffle Tots, served in a shaker tin.

At this point I was joined by The Savory Hunter himself, who had seen my tweets during the tasting and stopped by Bar | Kitchen on his way to an event. Aaron ordered the Parmesan Truffle Tots ($7), a side dish that was initially going to be taken off the menu, until a chorus of protests saved it. Thankfully so; despite being filled to bursting with food, I couldn’t stop nibbling on them. The tots are served in a shaker tin, a nice touch when you’re snacking at the bar.

Since I had already tried three of the cocktails, Aaron ordered the fourth one: the Blanchet, made with vodka, honey, fresh lemon and orange juices, and basil. Though I was nearing palate fatigue, my sip of the Blanchet did register enough for me to note that it matched well with the salty, addictive tots.

The fine-tuning at Bar | Kitchen will continue into the new year: the staff is scheduled for Intelligentsia and POSitouch training; the cocktail menu will begin to change weekly, with bartenders contributing their own creations; the silverware will be replaced. (Day literally winced at a knife when I held it up.)

In the meantime, Bar | Kitchen seems to be on its way to becoming something of an industry hangout; on separate visits I ran into Joe Brooke (The Edison) and Eric Alperin (The Varnish), who stopped by with Sam Ross (Milk & Honey, et al). Beyond the bartender clientele, Bar | Kitchen’s lively mix of high quality and affordability is sure to entice downtown residents, workers, and visitors alike.