Riding the Trolley of Death, Fueled by Plymouth Gin

If you follow Aaron Tell (The Savory Hunter) on Twitter, you may have seen this rather cryptic late night tweet at 12:18am on Tuesday, February 1st:

This dispatch from the Death Trolley was sent on the final leg of the Blogger Bar Hop, a night of revelry with a motley crew of gin-soaked bloggers, bartenders and random passers-by who were shanghaied along the way.

The idea for the bar hop was hatched a couple of months ago, during a holiday party at Musso & Frank. Caroline on Crack and I were talking about a bar crawl organized by Simon Ford, who had taken a group of L.A. bartenders for a night on the town that is now the stuff of legend. Caroline thought there should be a similar event for bloggers, and broached the idea to Aidan Demarest, who in turn talked to Erick Castro. A few sips of our Gibsons later, and Plymouth Gin was on board as the sponsor. Demarest would curate the hit list of bars and book the transportation, while Caroline would coordinate the blogger invites.

A couple of weeks later, an email was sent out to recruit a team to storm the gates of some of the best drinking establishments in the city. Answering Caroline’s call to action were me, Aaron, e*star LA, Food GPS, L.A. Cocktails Examiner, L.A.-O.C. Foodventures, Elina Shatkin (Squid Ink, Toque), and LAist Editor Lindsay William-Ross. The Blogger Bar Hop would be the ultimate test of our cocktailing abilities; only the strong would survive this mission and weak livers need not apply. Who would be found wanting? If the Blogger Bar Hop was a war movie, who would be that one guy showing everyone photos of his sweetheart back home? Who was going to be the redshirt of this landing party?

On the itinerary were some of Demarest’s favorite bars, including a few familiar names from his CV: “To me these bars represent a broad range of styles and atmosphere. And you can be sure at all of them that any time you go you’re getting a great drink.”

The team assembled last Monday night at The Spare Room, Demarest’s new bar and gaming salon in the Hollywood Roosevelt Hotel. To help identify us (as if we weren’t going to be noticeable), I brought some supplies left over from our Burning Man luau, including a box of leis and a special accessory for Demarest: 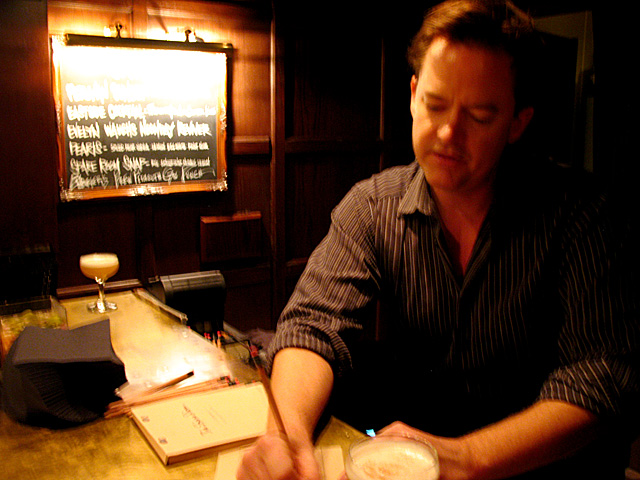 Aidan Demarest prepares a scorecard for the bar hop.

Demarest told us to fill out scorecards to track our drink tally; the winning blogger would get a free game of bowling at The Spare Room. To keep us honest, each cocktail on the card had to be initialed by a bartender. 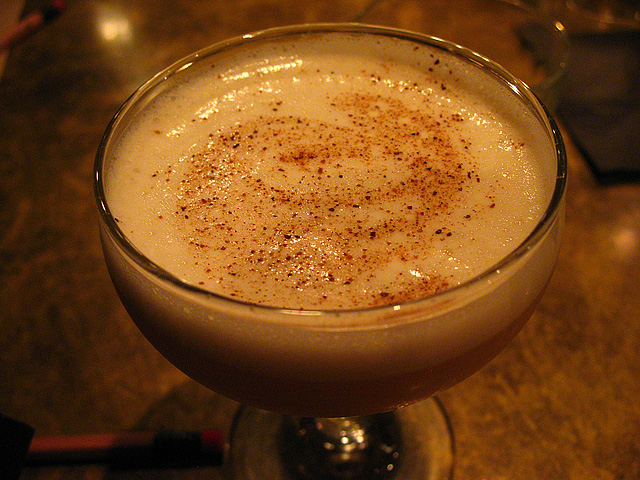 Next up was one of Demarest’s creations, the Spare Room Snap: rye whiskey, SNAP, lemon juice and freshly grated nutmeg. As I mentioned in my opening night review, the bar’s namesake cocktail is a great drink; well-balanced between spice, gingery bite, and the tart lemon. 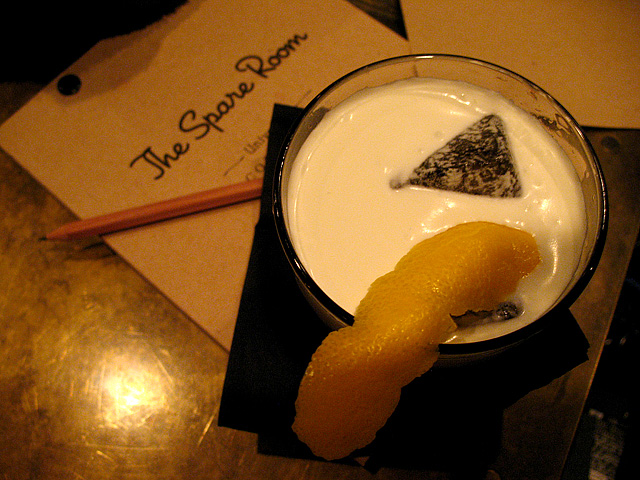 You Drink Our Milkshake

Then came a White Russian variation called the You Drink Our Milkshake, made with vodka, coffee liqueur, crème de cacao and cream. Another winner that was rich, velvety, and so very drinkable.

Some of the bar hoppers loosened up with a few frames of bowling, while others gave the photo booth a try. In the meantime, a punch bowl appeared by the bowling lanes. We were still at our first stop and we were already three or four drinks in.

Fortunately, it was time to leave and we headed downstairs to our chariot. Joining us for the epic journey were Castro, Spare Room bartender Naomi Schimek, and Lindsey Nader, the former PDT bartender who is creating the cocktail menu at the upcoming Son of a Gun.

According to Demarest’s plan, we would spend about 45 minutes at each bar, then hit the road. With such a tight schedule, there was no time to look for stragglers; once Demarest said it was time to go, if you weren’t on the trolley you’d be cabbing it back. To make sure this didn’t happen, we were each assigned a number to sound off each time we were ready to leave a bar. (No joke, more than one bar hopper was saved from getting left behind this way.) 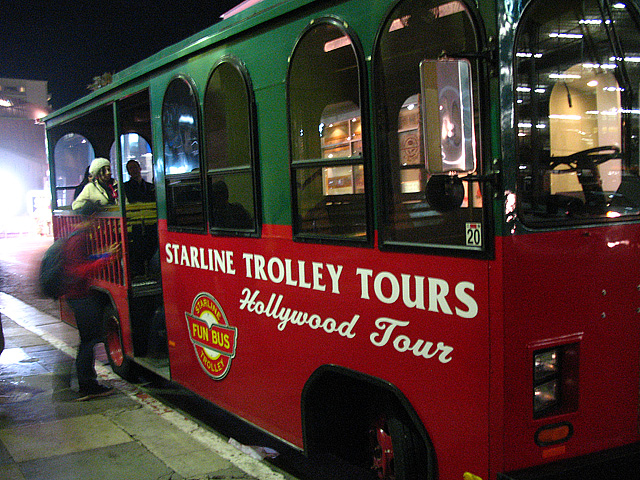 We board the Trolley of Death!

Demarest had stocked the trolley with beer, champagne and a bottle of bacon-washed bourbon he dubbed “Figgie Smalls.” (Naturally, none of these items would count towards our scorecards.) As we turned onto Hollywood Blvd., Demarest skillfully served the champagne; when he said that he could pour champagne “while driving the Indy 500,” you had to believe him:

Like any proper tour guide, Demarest would occasionally grab the microphone to point out landmarks, offer safety tips (“If you fall off, tuck and roll”) and keep us in line, with mixed results. As we continued east, rowdy passengers began haranguing pedestrians. Considering half the trolley was open and exposed, Lindsay summed up our somewhat vulnerable situation:

We made it through the gauntlet and pulled up to Big Bar in Los Feliz. Our arrival instantly turned the intimate bar’s vibe up to eleven; my sympathies to anyone who was there for a quiet Monday night drink. The consensus favorite cocktail seemed to be Bar Manager Juan Sevilla‘s excellent Merry Widow:

Another standout was a Clover Club that Elina let me sample. Sevilla and Alcove Cafe owner Tom Trellis sent out plates of delicious bar bites, which were devoured faster than chum during Shark Week:

Demarest decided to kidnap bartenders at each stop, so as we left Big Bar we were joined by Sevilla, Mia Sarazen and Rich Andreoli. We attempted to do a quick stop at Tiki-Ti, but sadly it was closed; the Trolley of Death pushed on. Esther and others braved the biting wind as we traveled north on the 110 towards our next stop: 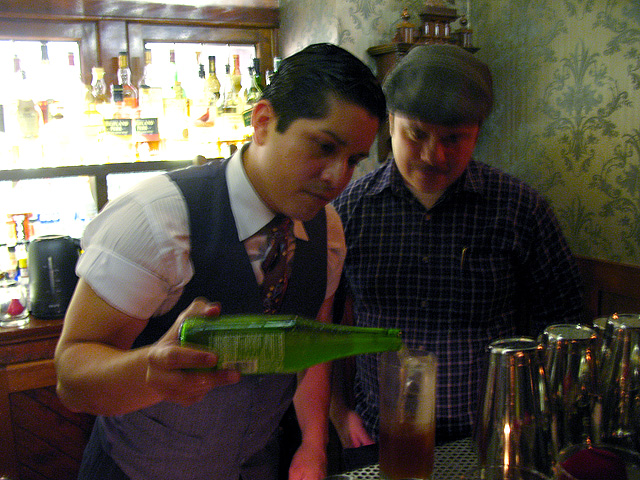 As we walked into a busy 1886, we were welcomed with coupes of Rose Parade Punch: gin, roses, cucumber and soda. Marcos Tello (who would ride the Death Trolley as well) gave a brief welcome speech before we enjoyed more libations from Garrett McKechnie and Danny Cymbal:

For the trip out of Pasadena, I joined the hardy group seated in the open part of the trolley, warming myself with occasional swigs of Figgie Smalls. There may have been PBRs and Edison beer involved, too.

The Death Trolley rolled into downtown L.A. and our next stop, The Varnish. Logistically, it made sense to go downtown after the other bars, but of course this meant that the later stops on the itinerary would have to deal with a group that was on the far side of a dozen drinks. Varnish GM Chris Bostick told me later he was following our bar hop tweets and, like a captain preparing for an approaching storm, was able to batten down the hatches before we arrived.

Devon Tarby was a rock star, handling regular customers and ginned-up bar hoppers with equal aplomb. Caroline asked Tello to make her a Manhattan, “for old time’s sake.” I was dancing with Schimek when it was suddenly time to leave; all those drinks must have had the cumulative effect of compressing time, because it felt like we had just walked in.

The wheels had really started to come off the rails by the time we hit Seven Grand:

Memories are scattered and fuzzy at this point, but the bar was definitely two or three deep and the clock was ticking on our stay (not that any of us were in dire need of more liquor). I’m pretty sure I ordered a WhistlePig Manhattan. I may have even drank some of it before a quick departure order was given.

Then it was back on the road, as we headed into the homestretch of the bar hop. Friends like Dan Cox were continuing to track our progress, and it seemed like they were having a good time drinking vicariously through us:

Our penultimate stop on the bar hop was the Original Tommy’s in Hollywood, where Demarest loaded the trolley with a massive to-go order to help us soak up some of the gallons of booze. There’s a vague memory of Food GPS taking his leave at this point, burger in hand.

Then we were back where it had all started. Only this time, we had to navigate a packed Roosevelt lobby and the queue to enter The Spare Room. We were all a bit gin crazed at this point, so copious amounts of water were all we could handle. Well, maybe a bit of dancing, too.

When the dust had settled, most of the bar hoppers had acquitted themselves admirably. Sure, there was sloppiness in abundance, but fear not, dear reader; we watched out for each other. No one was left behind and collateral damage was confined to a few (thousand) brain cells. And who had the winning scorecard? It was a tie between Esther and Lindsay, who both logged 22 drinks:

The chicken scratches on my own mangled scorecard got progressively worse with each stop, so I’m impressed they were even able to write anything towards the end of the night. Free bowling and props to both Esther and Lindsey for riding in the open section of the Death Trolley all night!

Esther was kind enough to let me and Caroline crash at her place, and the morning arrived rather abruptly with the sound of her smoke alarm going off. (Naturally, no one moved.) As I sat up on the couch, I went through the usual post-boozing checklist: phone, wallet, camera; everything seemed to survive the crawl intact. Well, almost everything:

Fortunately, I had a change of clothes with me and didn’t have to wear the jeans with the Tommy’s chili patch on the back pocket. For brunch, Esther suggested we meet Lindsay at The Hollywood Corner for some much-needed sustenance and Blogger Bar Hop debriefing. Unfortunately the Bloody Marys weren’t available, but Caroline and I managed:

No doubt about it, Caroline is a pro. Not only did she jumpstart and help organize the Blogger Bar Hop, she consistently tweeted throughout the night and also documented the shenanigans in an awesome Flickr album:

Many thanks to Aidan Demarest, Caroline on Crack, Erick Castro, Plymouth Gin, our trolley driver, and of course all the bartenders who helped make the Blogger Bar Hop a night that none of us will soon forget. Or remember, for that matter. Cheers!