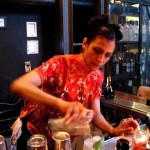 Zahra Bates kicked out the jams to raise funds for Japan.

Downtown is still be the place to be when it comes to the greatest concentration of craft cocktail bars in Los Angeles, but Hollywood is making some noise of its own. The latest to join the burgeoning Hollywood cocktail scene is B-Side, an intimate speakeasy-style bar tucked within the Rolling Stone Restaurant & Lounge at the Hollywood & Highland Center. Accessed from a nondescript door off Highland Avenue, the dimly-lit, industrial lounge has a vaguely post-apocalyptic vibe that feels more Road Warrior than Rolling Stone. With a drink menu developed by Ryan Magarian (Liquid Relations) and bar manager Tricia Alley, B-Side was already on the radar of the cocktail cognoscenti when it opened in March. Alley turned up the volume by launching a weekly guest mixologist night, which takes place at B-Side every Wednesday. Guests so far have included Naomi Schimek (The Spare Room), Marcos Tello (Tello Demarest Liquid Assets), and Jason Bran (Roger Room).

Last Wednesday, B-Side welcomed L.A.’s “Aphrodite of spirits,” Zahra Bates of Providence. The event was a fundraiser for Japan relief: Bates donated her earnings and a portion of the bar’s proceeds went to the Red Cross for its ongoing efforts. The L.A. cocktail community came out in force to show support, with Joel Black, Daniel Nelson, Schimek and Bran among those who stopped by during the night. 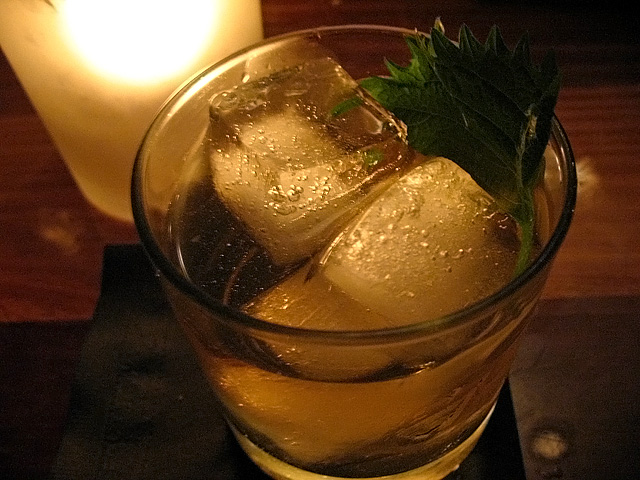 For her guest gig, Bates featured a selection of “greatest hits” from some of L.A.’s best bartenders, including Matt Biancaniello’s Kentucky Bubble Bath, Pancho’s Smoking Gun by Brent Falco, and Alley’s own Suds in a Bucket. After reviewing the impressive chalkboard menu (complete with a portrait of Bates), I ordered one of Bates’ signature cocktails, the Bamboo Gen: Bols Genever, Tokaji, Manzanilla sherry and shiso bitters. As Bates handed me the Bamboo Gen, she said that it “tastes like a sour but there’s no citrus.” Sure enough, the malty genever, sweet Hungarian wine, delicately floral sherry and gingery shiso melded into a unique profile akin to a sour. A wonderful cocktail to kick off the fundraising session.

Next was the Ode to Aud, Naomi Schimek’s tribute to Audrey Saunders: Japanese cherry green tea infused Nolet’s Silver Dry Gin, lemon juice, simple syrup, Green Chartreuse and egg white. I’ve always enjoyed Schimek’s drinks, but in this case what looked good on chalk unfortunately didn’t quite sing in the glass. The distinctly floral Nolet’s was overpowered by the tea, and coupled with the Chartreuse made for an aftertaste that struck a funky chord.

My final cocktail was the Matcha Sour by Jason Bran, made with Old Overholt Rye, matcha tea syrup, lemon juice, egg white and “Hello Kitty” Angostura Bitters. Well-balanced and topped with Bran’s stencil of the iconic Japanese character, the Matcha Sour hit all the right notes and was a great way to close out the night.

And the hits keep on coming: B-Side bar manager Tricia Alley will be testing her drinks tonight, per this tweet from earlier today. 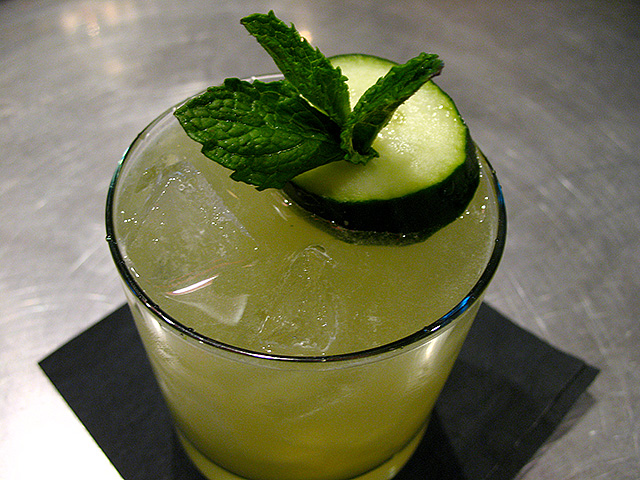 BONUS TRACK: Rolling Stone LA
When I recently met with Chivas Regal’s Richard Varga in the bar at Rolling Stone LA, Assistant GM Colin Hobbs introduced himself and asked the bartender to make us a couple of cocktails. The drinks were created by Ryan Magarian, the ubiquitous beverage service consultant and Aviation Gin co-founder.

First was the Whiskey Delicious: hot house cucumber, farm fresh peppermint, Jameson Irish Whiskey and freshly squeezed lime juice. It’s certainly well-named, a bright and easygoing whiskey cocktail that will do very well when the temperature heats up. To underscore its appeal, a couple sat next to us at the bar and the young lady ordered two of them. She told the bartender she had tried the Whiskey Delicious the day before and dubbed it “orgasmic.” Her tough-looking biker guy looked skeptical, then took a sip. His look of pleasant surprise was one of those moments that bartenders must relish.

Next was the Campari Pineapple Rickey, made with Belvedere Vodka, Campari, freshly squeezed juice, freshly extracted pineapple juice, and club soda. Another well-balanced, easily sipped drink that guests will order in bunches. Hobbs noted that the Rolling Stone cocktails are designed to be more mainstream and approachable than the craft cocktails being mixed downstairs at B-Side. This may be the case, but not many MOR drink menus feature something like the Kiwi Daisy (fresh kiwi, Aviation Gin, Green Chartreuse, freshly squeezed lemon juice, club soda) or a House Manhattan with Rittenhouse 100. Based on the two cocktails that Varga and I tried, the drinks at Rolling Stone LA (priced at $12) are much better than they need to be and many of them will appeal to even the most selective cocktail enthusiast.