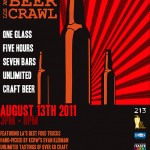 Tickets are only available online at Eventbrite and are on sale now. General Admission tickets cost $49.00 and include a 6-ounce tasting glass and wristband, which gives access to all the participating 213 bars and unlimited beer tastings from 3pm to 8pm.

Limited VIP Tickets are available for $69.00, which gives Crawlers early entry into the festival at 1pm, a full two hours before General Admission. Besides the extra sampling time, VIP ticketholders will also get to try exclusive pours from the brewers, as well as enjoy beer cocktails from 213’s mixologists.

To help soak up the suds, Evan Kleiman (host of KCRW’s Good Food) has invited some of LA’s favorite gourmet food trucks to take care of Crawlers along the route. Cole’s and Casey’s will also be offering food at their respective locations.

A portion of the proceeds will go to Heal the Bay, a nonprofit environmental organization dedicated to making Southern California coastal waters and watersheds, including Santa Monica Bay, safe, healthy and clean.

During the preview, Moses and The Beer Chicks announced that they are building on their LA Craft Beer Crawl partnership to open the 8th Street Bottle Shop, a craft beer specialty store located just inside the entrance to the Golden Gopher. The 8th Street Bottle Shop will be housed in the space where guests could previously buy spirits to go, thanks to the Gopher’s 1903-era liquor license, which provides for on-site and packaged liquor sales.

Going forward, The Beer Chicks will curate the beer lists at all of 213’s bars, as well as consult on management and staff training. “We recently revamped Golden Gopher’s craft beer menu and are adding taps and bottles across the 213 bars,” noted Perozzi. “We wanted downtown dwellers and bar patrons to take home the same great beer experience 213 bars provide in the way of personalized service and craft selections.”

Among other services, the Bottle Shop’s staff will offer special tastes and advise on flavor profiles and food pairings. The Beer Chicks will rate and review the beers, and patrons will be able to peruse the store’s “beer bible” for descriptions.