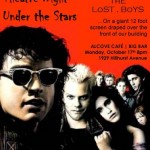 October 17: Walk-In Theatre Night Under the Stars at Big Bar

With Halloween just a few weeks away, Big Bar is helping Angelenos get in a devilish mood with its latest Drive-In Walk-In Theatre Night Under the Stars, featuring The Lost Boys. As with its previous movie nights, Big Bar will be showing The Lost Boys on a 12-foot screen that’s draped over the front of the Big Bar – Alcove Cafe building, while guests watch from the garden patio. 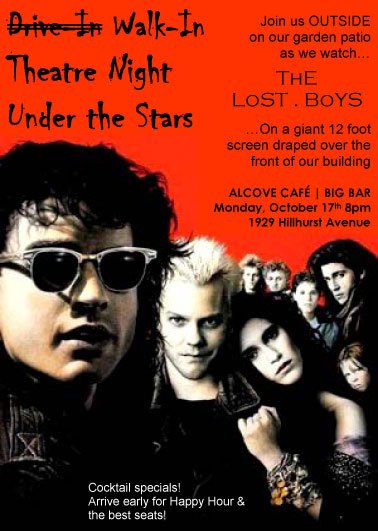 This event will be the last night that Bar Manager Juan Sevilla will be at Big Bar. Sevilla is moving to New York to work at Soho House, while Dan Long takes the reins at Big Bar. Long joins the management ranks with fellow First & Hope alums Brent Falco (Cole’s) and Naomi Schimek (The Spare Room).

The movie starts at 8pm, but arrive early to sink your teeth into Big Bar’s new menu of Autumnal Cocktails, a 12-drink list that mixes classics and signatures. Making a welcome return is the Bo Diddley, made with Old Overholt, King’s Ginger Liqueur, lime, honey, Angostura bitters and cucumber. Other cocktails give a nod to the season, such as the Harvest Moon (Lairds Applejack, Amaro Nonino, Lillet, apple juice, Angostura) and the Army and Navy (Bols Genever, orgeat, lemon, nutmeg).