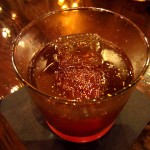 If your restaurant is located in the shadow of a $600 million hotel complex at the iconic intersection of Hollywood and Vine, no one will blame you if you have some “look-at-me” flash to catch the tourist crowd’s attention. From its location in the historic Taft Building, Wood & Vine has done the opposite, quietly building a loyal following that enjoys the moderately-priced shared plates, craft cocktails, and locally-sourced wines and beers.

Executive Chef Gavin Mills (former sous chef at Bastide) visits different farmers markets every morning to procure the freshest ingredients for a seasonally-driven menu that he changes daily. Bartender Jason McBeth, who worked with Mills at Bastide, features a focused list of classic and signature cocktails, divided into Clear Booze, Dark Booze, and seasonal libations. There’s also a nice Whiskey List, which shows a predilection for the brown stuff that Wood & Vine shares with guests at events like its Heaven Hill and Buffalo Trace distillery tastings. I stopped by Wood & Vine recently for a hosted sampling of the Fall Cocktail Menu, joined by Events Manager Kurt Rodeghiero.

Designed by Kenneth Brown, Wood & Vine takes its cues from Old Hollywood, incorporating Art Deco tile, vintage woods, reclaimed furniture and exposed brick into the lofty, double-height space. The result is a refined but welcoming atmosphere epitomized by the redwood-decked outdoor patio, with a communal table that surrounds a square-shaped fire pit. Rodeghiero noted that Wood & Vine always holds a few of the outdoor communal seats for walk-ins. It’s hard to believe the warm and inviting patio was once a parking lot.

Rodeghiero said that Wood & Vine’s local, sustainable and organic ethos is shared by everyone who works there, a philosophy that’s reflected in this list of purveyors on the restaurant’s website. Case in point is Paso Prime, which Rodeghiero said is known for having only two cattle grazing per acre at any time. Mills selected Paso Prime for Wood & Vine because the flavor reminds him of the beef he used to get back home in his native England.

Like yours truly, McBeth is a native Angeleno, so he’ll give a nod to Los Angeles in his drink names. For example, the Rodia’s Garden (from the Winter Menu) was named for Sabato “Simon” Rodia, who created the Watts Towers. McBeth will use literary references as well, as in the Ask the Dust, an Autumn Potable that gets its name from John Fante’s semi-autobiographical novel about life in Los Angeles during the Great Depression. Made with Rowan’s Creek bourbon, honey, lemon juice and cinnamon apple foam, the Ask the Dust is a quintessential fall cocktail. This was my first experience with the small batch Rowan’s Creek; McBeth compared its flavor profile to that of a confectionery. It’s definitely a bourbon I’m looking forward to encountering again. 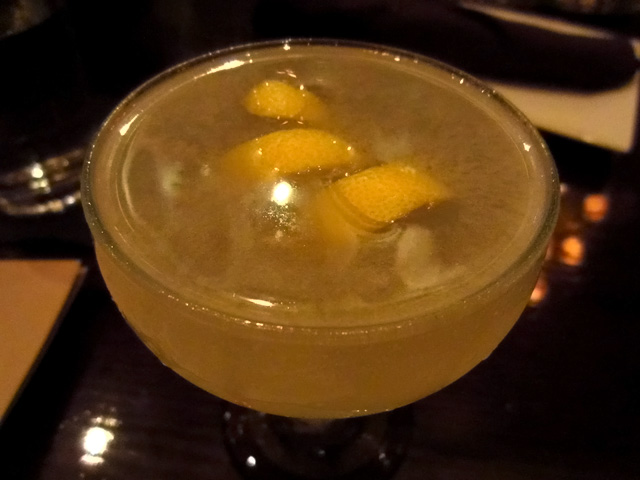 Next was the Millennium, a twist on the 20th Century Cocktail made with gin, Cocchi Americano, white crème de cacao and lemon juice. McBeth explained that he swapped the 20th Century’s Lillet Blanc for the Cocchi Americano because Lillet was originally more bitter and had stronger orange notes, while the current formula (with its reduced amount of quinine) dates to the mid-1980s. 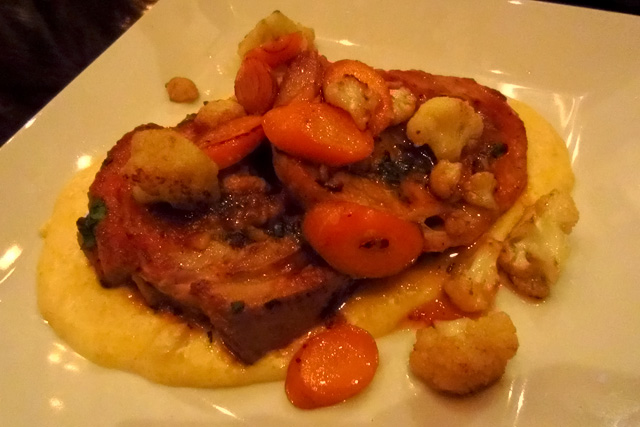 Rodeghiero suggested a couple of Shared Plates that showcased Mills’ farm-to-table cuisine. First was a superb 12-Hour Sous Vide Veal, served over a potato puree with roasted carrots and cauliflower. The veal was beyond fork-tender, practically dissolving in my mouth. The generous serving was enough to be a main for those with heartier appetites. This dish isn’t always on the menu, so follow Mills on Twitter for updates like this:

Wood & Vine’s pastas are made fresh in-house, so the Hand-Rolled Potato Gnocchi are soft and pillowy, far better than the chewy, frozen ones that many diners are accustomed to.

I was told by pretty much everyone that I had to get the Fried Chicken and Waffles, which was recently named Best Waffle Dish in Los Angeles magazine’s annual Best of LA issue. Though I didn’t have it this time, the enticing aroma coming from other tables was more than enough to convince me to order the chicken and waffles on my next visit.

Rather than launching a seasonal menu all at once, McBeth will roll out new drinks as they come together. As this post goes live, keep an eye out for his Kilt Lifter, a Blood and Sand variation made with Famous Grouse Scotch Whisky, Carpano Antica, orange juice and FAIR.Goji Berry Liqueur (in place of Cherry Heering). McBeth finishes this cocktail with a cherry hibiscus bitters that’s not on the market.

The Kentucky Cashmere had caught my eye earlier, but McBeth wanted to save it for later in the session rather than overwhelming my palate from the get-go. The Kentucky Cashmere is made with chai and vanilla-infused bourbon, R. Jelínek Fernet and Miracle Mile Chocolate-Chili Bitters. Though the name is actually a reference to Kashmir, McBeth felt it was better not to use the politically volatile region and instead chose the fabric as a play on the contrasts of hard-soft and masculine-feminine. 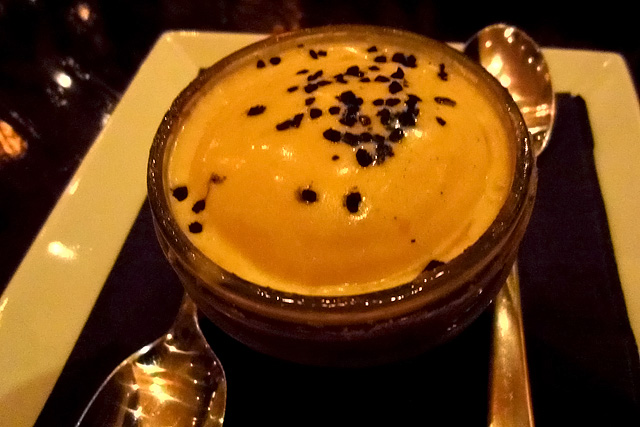 I stepped away from the bar just long enough for McBeth to send out a Butterscotch Pot de Crème, which he said pairs really well with the Kentucky Cashmere. Served with caramel ice cream and topped with black sea salt, the pot de crème indeed made for a wonderful mix of flavors, from the bittersweet and spicy cocktail to the rich caramel and hit of salt at the finish from the dessert.

Andino Martinez, a variation on the classic made with Pisco, Carpano Antica and Maraschino Liqueur.

The tasting finished with the Pure Morning, made with Novo Fogo Silver Cachaça, FAIR.Café Liqueur, house chocolate whipped cream, and Fee Bros. Aztec Chocolate Bitters. McBeth said the Pure Morning was a “thank you” to Novo Fogo founder Dragos Axinte, whose small batch, organic cachaças and company mission are well-attuned to the Wood & Vine mindset. McBeth was still tinkering with the whipped cream at the time of the tasting, so here’s hoping this wonderful sipper is ready to go as we head deeper into autumn.

Sunday Brunch
Beginning Sunday, October 23rd, Wood & Vine will be open for brunch service on Sundays from 10:30am to 6:30pm. Wood & Vine will offer new menu items, new brunch drinks, and a new soundtrack to accompany the daytime vibe. Here’s a sneak peek of a few of the Sunday Brunch dishes: