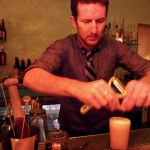 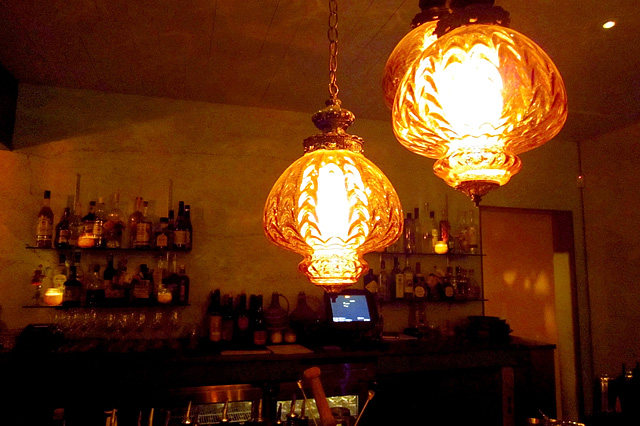 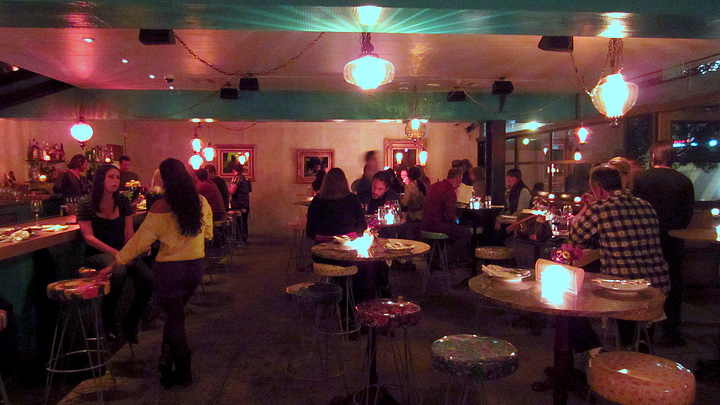 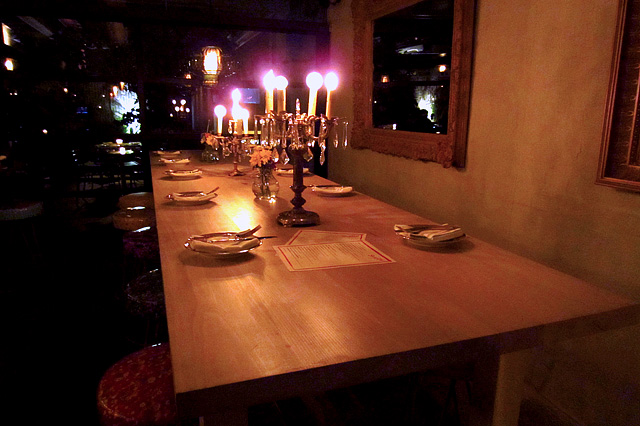 Montego Bay native Sean Knibb, who also designed the mid-century look of A-Frame, returns to his roots to create a funky, beachfront vibe for Sunny Spot. Floral patterns, turquoise beams, brightly-colored stools, marble tops and gilt mirrors are all part of the eclectic visual mix. Reed grasses along the walls and a blanket of trees provide an intimate setting for the patio. Knibb ups the formality in the Rum Den with white linen-topped tables, while adding a bit of whimsy with a “birdcage booth” swathed in Persian silk. 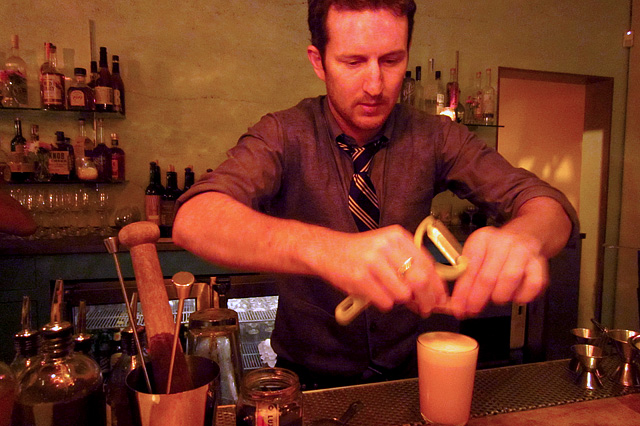 As he did previously with A-Frame and the Alibi, Brian Butler oversees the cocktail menu at Sunny Spot. I pulled up a stool at the main bar, sat down under the amber lamps, and started with an Imperial Fizz, a great variation on a traditional sour made with rye, Jamaican rum, egg white, lemon juice and Angostura Bitters. The Imperial Fizz is the ideal intro to Butler’s menu, which features a number of rum-based creations and a few other spirited signatures. My dinner companion soon arrived and went with a lovely Champagne Cocktail: Brut Champagne, Angostura and Creole Bitters. 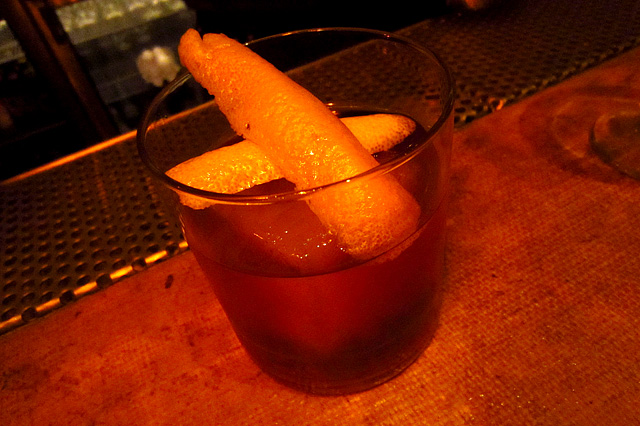 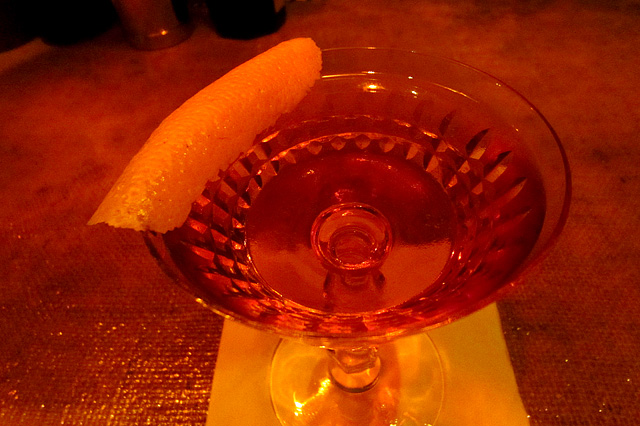 Next up was the Dictator, a wonderful sipper made with Trinidad rum, Dolin Blanc, Galliano and CioCiaro. As befitting its name, the Dictator is served in an elegant, vintage Tiffany glass that Butler sourced during one of his frequent flea market and vintage store excursions.

Butler’s drinks are worth the trek alone, but for most guests the initial draw will be the bold flavors of Choi’s cuisine. Like the menu at A-Frame, the moderately-priced dishes are designed to be shared, which we did with enthusiasm after ordering from the randomly listed apps and larger plates with the too-cute names. Though it was only the second day of service, the kitchen was on point and the food was well-executed. 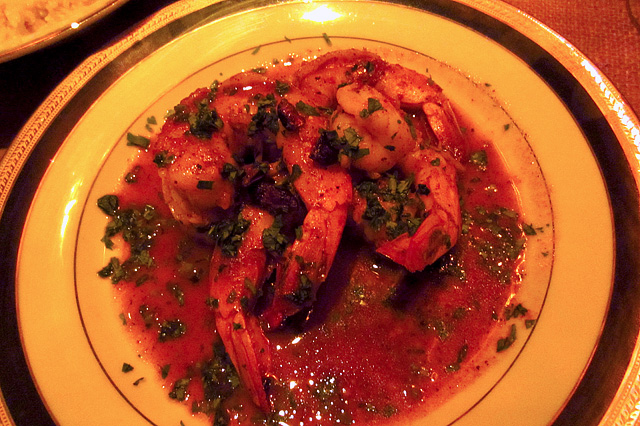 We began with the rum-glazed Diablo Prawns with garlic butter and herbs ($13). Despite the name, the heat from the nicely cooked and flavorful prawns was moderate. A side of the Yellow Salty Rice ($3) is great on its own, and works even better when mixed with the prawn sauce. 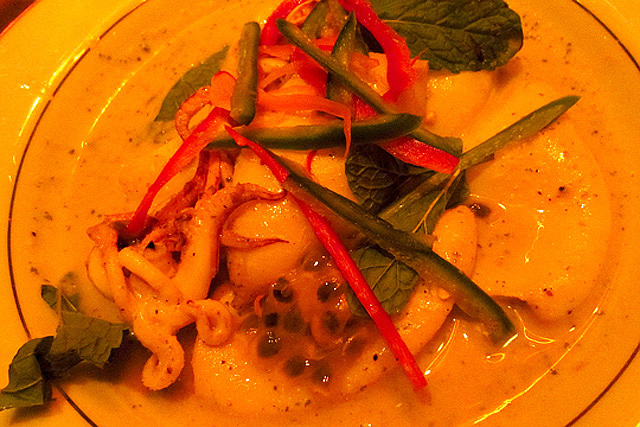 Next was the Charred Squid with passion fruit, coconut, chilies and mint ($10). The perfectly cooked squid, with its tropical notes and spicy kick, was just what we needed before we dove into the heart of the meal. 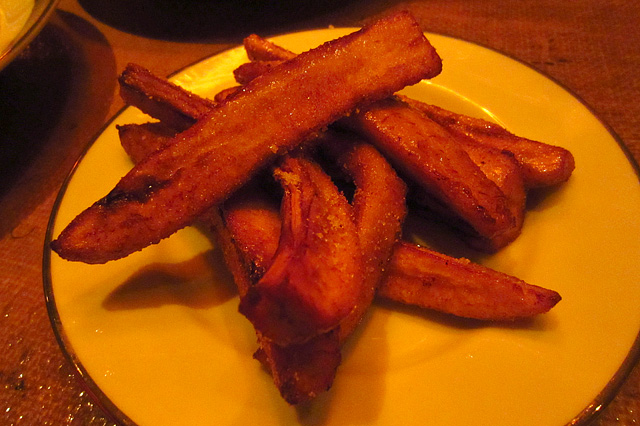 The kitchen really hit its stride with the next trio of dishes. First up were the marvelously addictive, sweet and salty Fried Plantains ($4). Choi describes his goal for the plaintains in a recent Food & Wine interview: “As soon as this dish hits the table, I want everyone to grab it and eat it and then it’s gone. And then say, ‘Get me two more plates, these are freaking delicious.’” And sure enough, we ordered another plate. Overripe plantain spears are tossed with cane and pulverized palm sugars, then fried “until they’re almost black.” Before plating they’re tossed again with sugar, salt and lime. 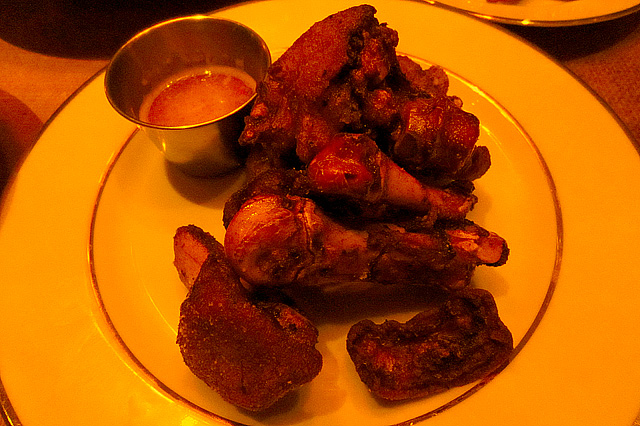 Fried Pig’s Feet ($6) are brined with sugarcane, braised, then deep-fried. We dipped them in the accompanying chili vinegar and began the delectable task of working the tender meat, cartilage and fat from the bone. 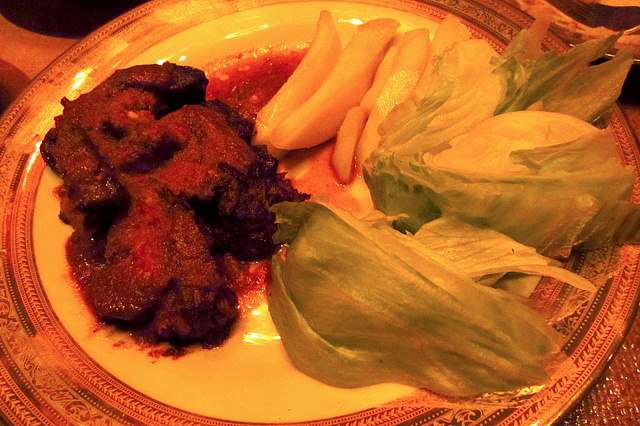 Living up to its “Greatest Of All Time” acronym, the slow-roasted G.O.A.T. ($15) is cooked sous vide for 24 hours in Red Stripe and rum with allspice and clove, among other spices. The idea is to spoon some of the meat into an iceberg lettuce leaf along with a slice of pickled mango. It’s a superlative combination of the earthy goat with the sweet-sour, tart mango wrapped in the crunchy lettuce.

We finished with the Coconut Ginger Sorbet ($4), a welcome hit of cool coconut with a gingery bite, served in a vintage silver goblet.

Half a dozen courses and a few hours later, and two thirds of the menu remained tantalizingly untried. According to the Sunny Spot website, Choi will change the menu monthly or “based on what I’m feeling,” so frequent return visits will be a necessity. Judging from the packed house, there are already plenty of fellow travelers ready to tour the West Indies by way of Venice.