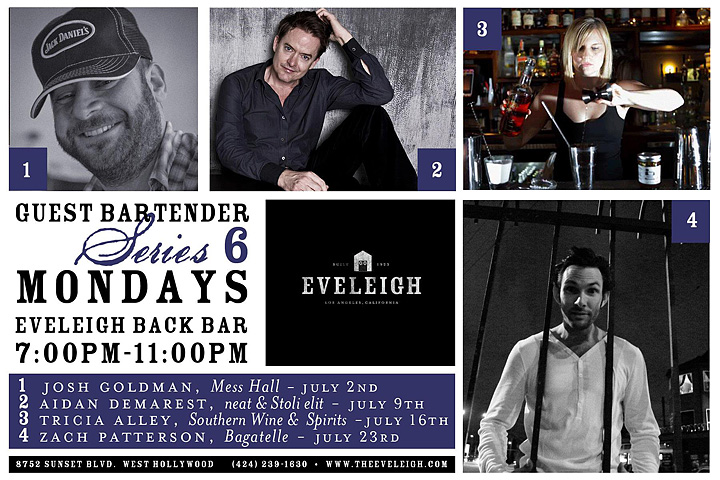 Just in time to get livers in fighting shape before Tales of the Cocktail, Eveleigh is kicking off Round 6 of its stellar Guest Bartender Series. Launched last fall by Eveleigh Bar Manager Dave Kupchinsky, the Monday night series continues to be one of the city’s best cocktail parties, showcasing some of LA’s top bartenders and visiting luminaries in the gorgeous setting of Eveleigh’s back bar.

Chris Bostick and a tray of Hoss' Micheladas.

Round 5 began with the final LA appearance of former Varnish GM Chris Bostick, and concluded with 320 Main’s Jason Schiffer. In between were standout guest sessions that featured Devon Espinosa (Pour Vous) and Erick Castro (Beefeater).

Round 6 kicks off on Monday, July 2nd, featuring Josh Goldman of the upcoming MessHall in Los Feliz. After Goldman, it’s three more weeks of liver-stretching excellence:

*In memory of Patrick Kelly, the back bar will be dark on July 16th. Tricia Alley will be rescheduled, date TBD.

As always, Eveleigh’s Industry Night also takes place every Monday, beginning at 7pm. Industry Night features bar bites and specials like a $4 Fernet shot, a shot of Wild Turkey and Session Lager for $5, and classics like $7 Negronis and $8 Manhattans and Old Fashioneds.

For more photos of Eveleigh’s Guest Bartender Series Round 5, visit the Thirsty in LA Facebook page.