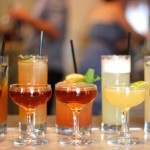 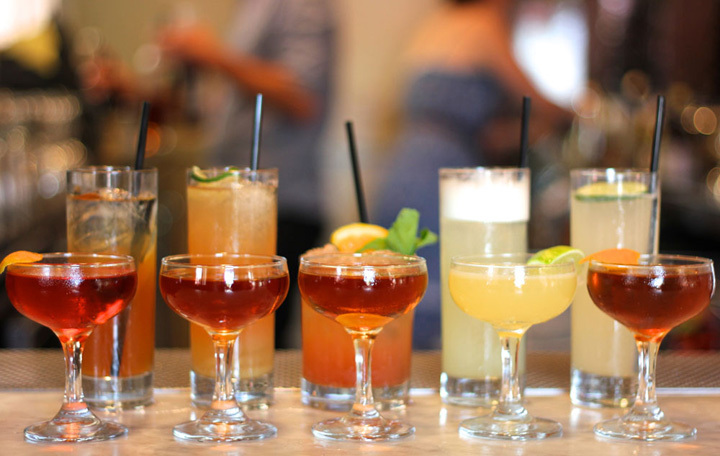 Just when it looked like the summer of 2012 was on the wane, cocktail aficionados have been gifted with a Midsummer Cocktail Menu, courtesy of Los Feliz favorite Big Bar at Alcove. Of the eleven new cocktails, ten were created by head bartender Dan Long, along with a standout from Matt Schaefer. Long and bartender / photographer extraordinaire Eugene Lee recently hosted a tasting of the new menu, which happily coincided with one of Big Bar’s Mixtape Mixology nights, featuring music curated by Lee. Joining in on the fun were fellow imbibers Chuck Taggart (Looka!), Caroline on Crack, Gourmet Pigs and Louis Anderman, whose superb Miracle Mile Bitters are showcased throughout the menu. 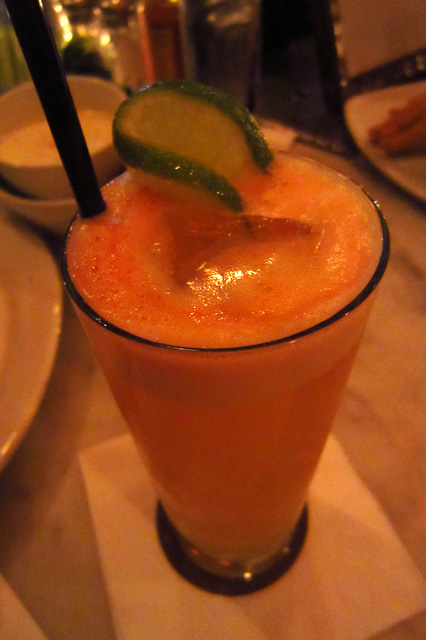 Thorn In My Side

The tasting began with the Thorn In My Side, made with Knob Creek Rye, Martini & Rossi Bianco Vermouth, fresh ginger and Blackthorn cider. Sipped neat, the recently-released Knob Creek Rye first hits with pepper and spice, aromatic and well-rounded on the palate and a hint of vanilla on the finish. Surprisingly subtle for a 100-proof rye whiskey, the Knob Creek plays well in this tall drink, lengthened by the cider and brightened by the ginger kick. Long said his overall approach for the menu was to create drinks that could be enjoyed on the Big Bar patio, and the Thorn In My Side perfectly captures this intent. 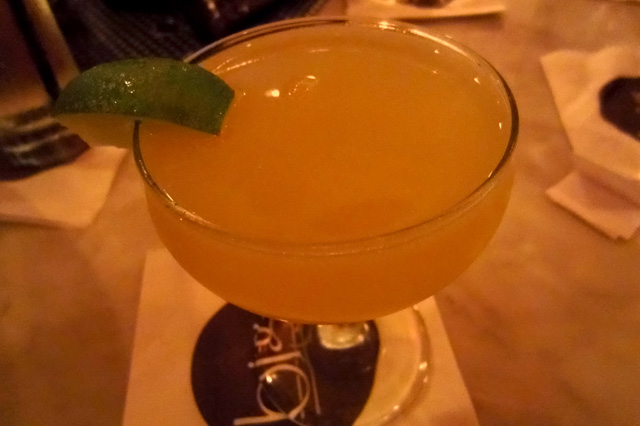 Next was the Gin and Tonic Cocktail: Beefeater Gin, Tempus Fugit Kina l’Avion d’Or and Miracle Mile Bergamot Bitters, finished with a kaffir lime tincture mist. Another winner for the patio, the G&T is deceptively simple in its name, with a complexity and bittersweet depth provided by Tempus Fugit’s quinquina, an “Alps-Provence” style aperitif made from a 100-year-old recipe in Switzerland.

Long’s take on the Picon Punch is made with Amaro Montenegro, Pierre Ferrand 1840 Original Formula Cognac, fresh lemon juice, grenadine and orange bitters. A trip to Bakersfield inspired Long’s inclusion of the Picon Punch, a favorite cocktail of central California’s Basque community. The key to the classic Picon Punch was Amer Picon, a “lost” ingredient whose current iterations (Picon Biere and Picon Club) are shadows of the original formulation, which clocked in at 39% ABV, compared to the contemporary 18% ABV. To emulate Amer Picon’s orange and bitter profile, Long uses the more subtle Amaro Montenegro, then gives his variation a hefty backbone with the marvelous Pierre Ferrand 1840, named “Best New Product” at the 2012 Tales of the Cocktail Spirited Awards. 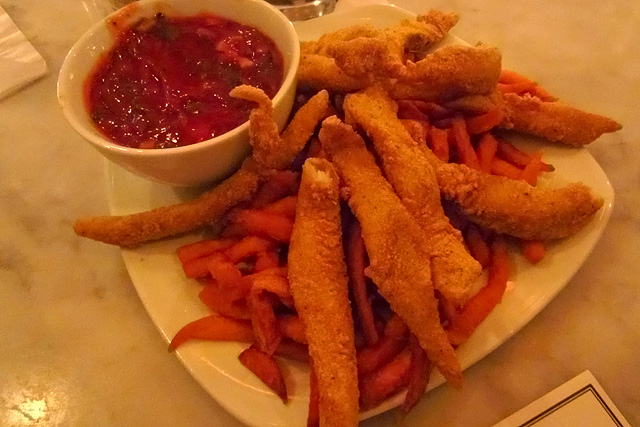 General Manager Sean Loeffel sent out enough bar bites to feed a small army, or just about enough for several bloggers. Highlights included the carnitas sliders and the refreshingly light tilapia fish sticks, served with sweet potato fries. Most surprising were the tempeh “firecrackers,” which resembled french fries but with a more unique texture. Served with a ranch dipping sauce, this item would go over well in any bar, all the more so for being vegetarian-friendly. 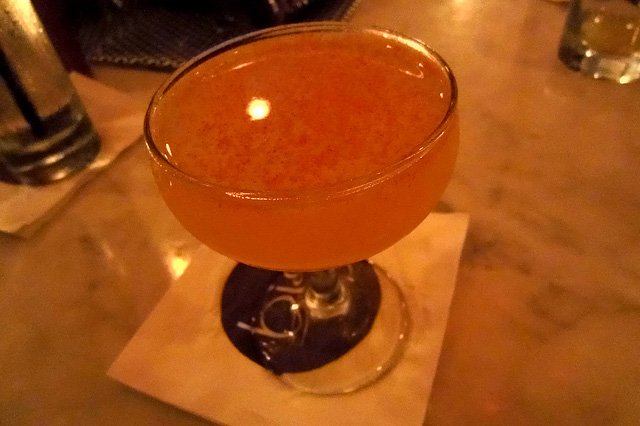 The Most Interesting Cocktail in the World

Then came Schaeffer’s creation, the Most Interesting Cocktail in the World: Del Maguey Mezcal Vida, fresh lime juice, cinnamon syrup, Miracle Mile Chocolate-Chili Bitters, garnished with ground cayenne pepper. With a name like that the cocktail had better deliver, and it does so with a multi-layered flavor profile that rewards with each sip, from the smoky mezcal to sour-sweet notes from the lime and syrup, finishing with a lingering heat from the bitters and cayenne. 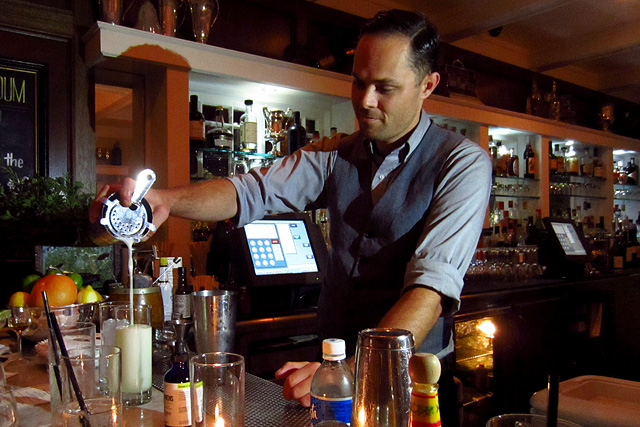 Long set his sights on creating an ideal brunch cocktail with his next drink, the Selero Gin Fizz: Plymouth Gin, Green Chartreuse, fresh lime juice, Bittermens Orchard Street Celery Shrub, egg white, topped with celery seeds. With the herbal funk of the Green Chartreuse as its anchor, the Selero Gin Fizz is just what the doctor ordered for brunch: spirited without being heavy-handed, sour but rich and balanced in texture, with just enough fizz to keep your palate engaged. Would love to see this one make an appearance on subsequent seasonal menus.

When he was workshopping his next cocktail, Long realized it improved as it got closer to room temperature. With that in mind, the Belanda Cocktail became a scaffa, a drink made with ingredients that are mixed in the glass without ice or dilution. To give his scaffa sufficient chill, Long refrigerates Bols Barrel-Aged Genever, apricot brandy and Lustau East India Solera Sherry. He tops the Belanda with Improved Bitters, made with 1 part Angostura bitters, 1 part Maraschino Liqueur and 1/2 part absinthe. The Belanda Cocktail is an outstanding showcase for the excellent Barrel-Aged Genever, and sure enough as it warmed the scaffa opened up with a rich, full-bodied complexity. A drink that can be enjoyed year round. 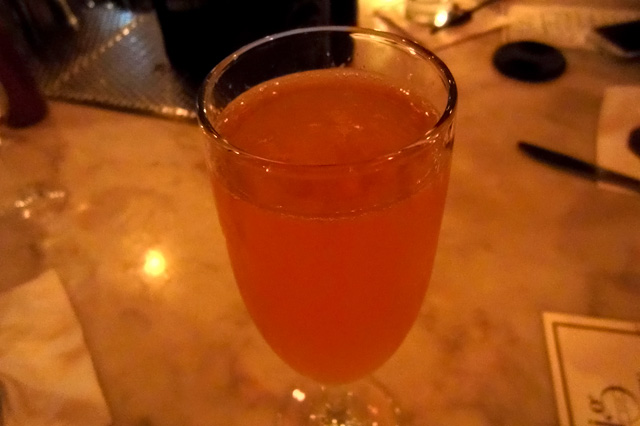 Held over from the previous menu, the Chaton de Mer (“kitten of the sea”) is an homage to Sailor Jerry National Brand Ambassador Rachel Furman, made with Sailor Jerry Spiced Rum, St. Germain, lemon, grapefruit, bubbles. 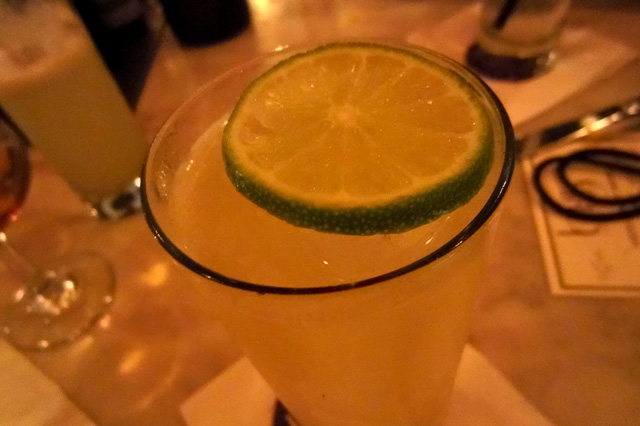 Once again setting his sights on the patio, Long next offered the Sal Paradise: Oro Torontel Pisco, fresh grapefruit juice, fresh lime juice, honey, Miracle Mile Sour Cherry Bitters and tonic. Long considers the Oro a “benchmark spirit,” and for this cocktail he combines it with his love for grapefruit and tonic. Named for the protagonist from On the Road (and playing on the character’s last name as a synonym for the patio), the Sal Paradise comes together seamlessly in yet another winner that’s made for sipping alfresco. 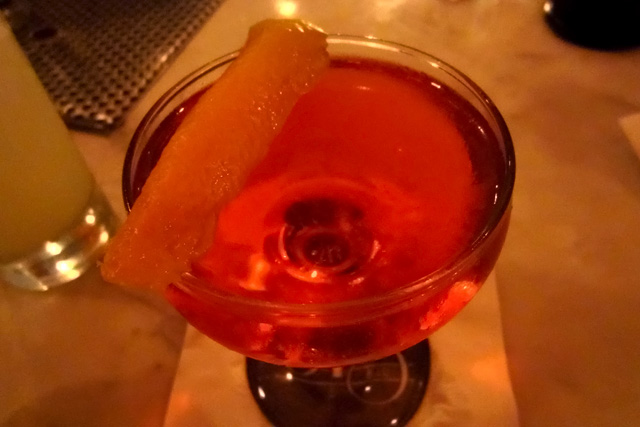 Long calls the Negroni “one of the greatest drinks ever,” and La Rosita is a top notch tequila-based variation, made with Partida Reposado Tequila, Campari, Dolin Dry Vermouth, Carpano Antica, Angostura Bitters. 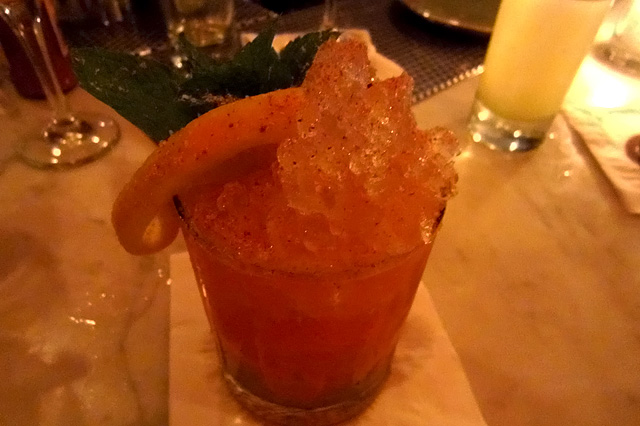 Long loves tiki drinks, and always features at least one on each Big Bar menu. For midsummer, he weighs in with a potent take on the classic Navy Grog, the Jet Stream: Zaya rum, El Dorado 12-year rum, Novo Fogo Gold Cachaça, Campari and “LGH Fuel” (lime, grapefruit and honey). In a summer that’s been packed with superlative tiki events and cocktails, the Jet Stream blows its way to the short list of favorites from this season. There’s a lot to take in with each sip: slightly bitter, with rich vanilla notes from the rums and a depth from the two-year aged cachaça. Dangerously easy going down, the Jet Stream will let you know pretty quickly that it’s not to be trifled with. 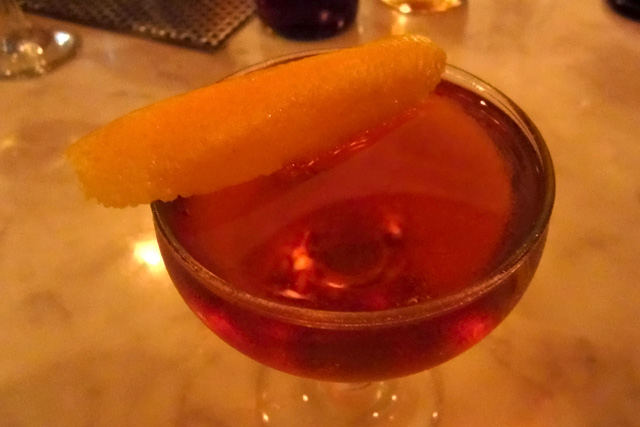 The tasting ended on a high note with the fantastic St. Anne’s Helper, made with Eagle Rare 10-Year Bourbon, Carpano Antica, Amaro Meletti and Miracle Mile Forbidden Bitters. I’ve said before that the Manhattan is my all-time favorite cocktail, and that love extends to its seemingly endless variations. Taking its name and inspiration from a walk that Long took through the French Quarter in New Orleans, the St. Anne’s Helper gets herbaceous and chocolate notes from the Meletti, finished with Anderman’s singular Forbidden Bitters. Once again, a cocktail I would enjoy any time of year.

The summer of 2012 may be winding down, but there’s still plenty of time to work through Big Bar’s Midsummer Cocktail Menu, a stellar collection that ranks among the best in the city at the moment. From perfect patio sippers to spirit-forward aromatics, along with the unique scaffa and a knockout of a tiki drink, Big Bar is sending the summer off in a big way.

More coverage of the Midsummer Cocktail Menu at Looka!