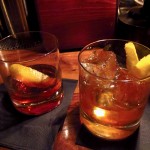 By thirstyinla On September 7, 2012 · Add Comment · In Events, Openings

To celebrate last month’s Grand Opening of Seven Grand San Diego, Cedd Moses and 213 Nightlife invited a small group of friends and family to a “Whiskey on the Rails” party, a rollicking roundtrip journey by rail on Amtrak’s Pacific Surfliner. Joining the 213 crew were a few members of the media, including yours truly and fellow imbiber Caroline on Crack. Seven Grand San Diego had soft opened in the North Park neighborhood in July, the newest addition to an already-burgeoning craft cocktail scene. 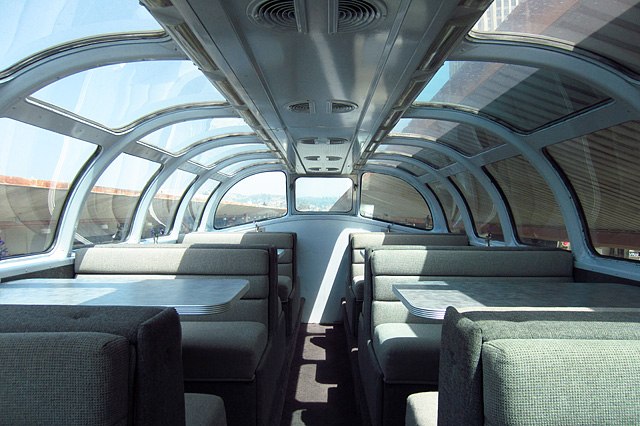 Our chariot for this trip was the Silver Splendor, a 1950s Vista-Dome railcar owned by our gracious hosts, Heidi and John Caestecker. Among the passengers were Moses, Seven Grand GM Angus McShane, 7G Spirit Guide Pedro Shanahan, Eric Alperin of The Varnish, and designer Ricki Kline of Patry+Kline. 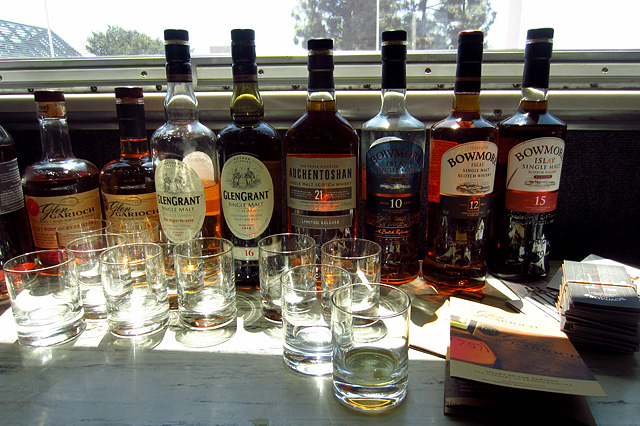 The Silver Splendor was well-stocked throughout its multiple levels, from bourbon and ryes on the observation deck to single malts in the lower lounge. In lieu of formal tastings, a casual don’t-mind-if-I-do mindset was encouraged and enthusiastically embraced. 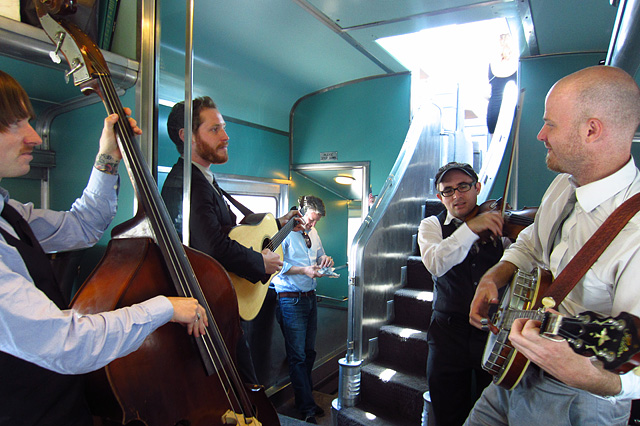 The Get Down Boys 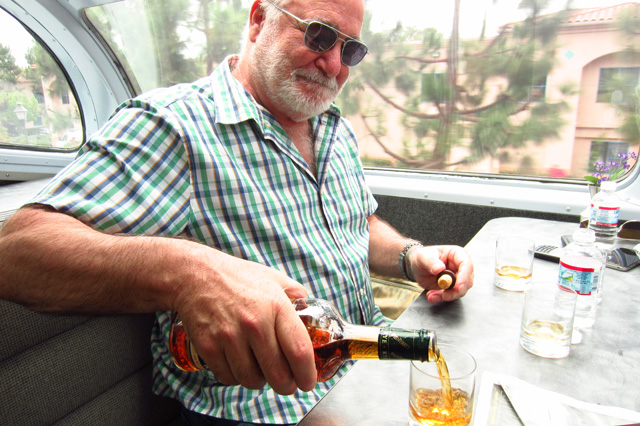 Ricki Kline had the Wild Turkey situation under control.

Passengers enjoyed live bluegrass by LA-based The Get Down Boys, who performed admirably in tight quarters and gently moving surroundings. With the picturesque Southern California scenery speeding past, the bluegrass was the ideal soundtrack for enjoying a generous pour of Wild Turkey 101 Rye.

As we neared our destination, Shanahan led a quick tasting, beginning with Death’s Door White Whisky to open the palate, followed by Wild Turkey 81 and 101. 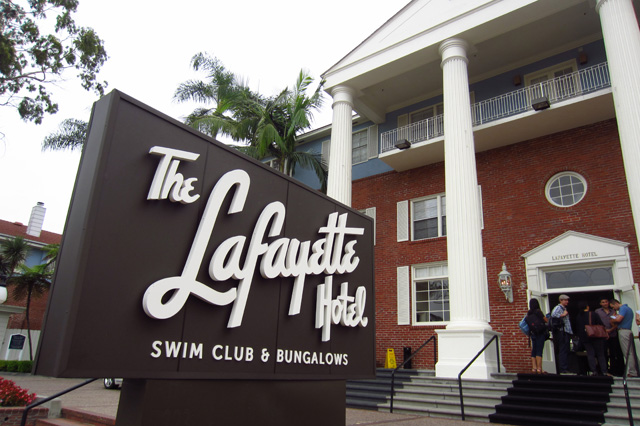 After arriving in San Diego, the Whiskey on the Rails group checked into the historic Lafayette Hotel, which completed a $4 million restoration in 2011. Built in a grand colonial style in 1946, the Lafayette was once a getaway for stars like Bob Hope and Ava Gardner.

The Lafayette’s most interesting feature isn’t one of its modern boutique amenities. Tucked away in the hotel’s east wing is the Red Fox Steakhouse and Piano Bar, a jaw-dropping time capsule that was originally an old inn in Surrey, England called the Red Fox Room, dating to around 1560. The entire Red Fox Room was dismantled in 1926, shipped across the Pond, and rebuilt as an “Ocean House” at the behest of the actress Marion Davies. After the property was sold, the “Ocean House” was converted into a hotel. Some time later, the Red Fox Room was dismantled yet again and lay dormant in storage before it was resurrected at the Lafayette. After a pregame cocktail with Caroline at the Red Fox, we boarded the shuttle to Seven Grand San Diego’s grand opening bash. 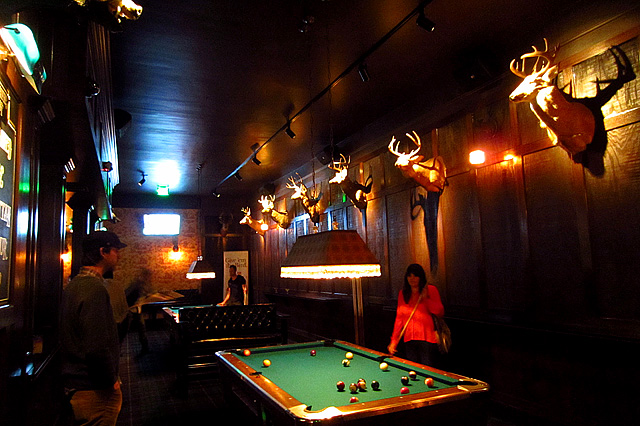 Entering Seven Grand San Diego from University, one is immediately struck by how familiar it feels. Design firm Patry+Kline had ensured that Seven Grand’s hunting lodge DNA remained remarkably intact throughout its southern sibling. The layout may be reversed, but it’s all there: to the right is a massive bottle wall (“262 whiskies and counting,” according to the chalkboard), while pool tables are to the left and a dedicated smoking patio is off to the side.

The evening began with a variation on the classic Boulevardier, made with Death’s Door White Whisky, Campari and Carpano Antica. The unaged spirit gave the Negroni-esque cocktail an herbal maltiness, as well as a sly nod to the railway journey from earlier that day.

A second bar is located near the stage in the back room.

The most noticeable difference between the two 7Gs is San Diego’s back room, with its second bar and a proper stage for live music. Going forward, 7G SD will host local jazz and blues artists, with no cover charge. San Diego’s acclaimed beer culture is given its due with two dozen handles, twice the number of taps found in LA.

Like its Los Angeles counterpart, Seven Grand San Diego will also have a Whiskey Society membership program, with monthly gatherings that explore the spirit with tastings led by master distillers, brand ambassadors and other key industry figures. 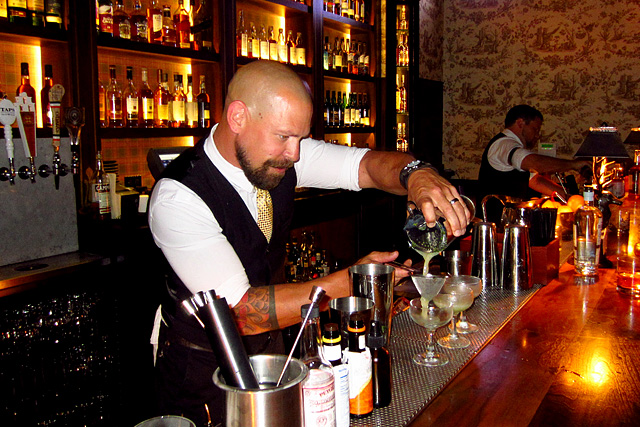 Led by former Prohibition head bartender Tim Stevens, the 7G SD crew was on point throughout the event, mixing cocktails at a pace that kept up with the rapidly-filling venue. 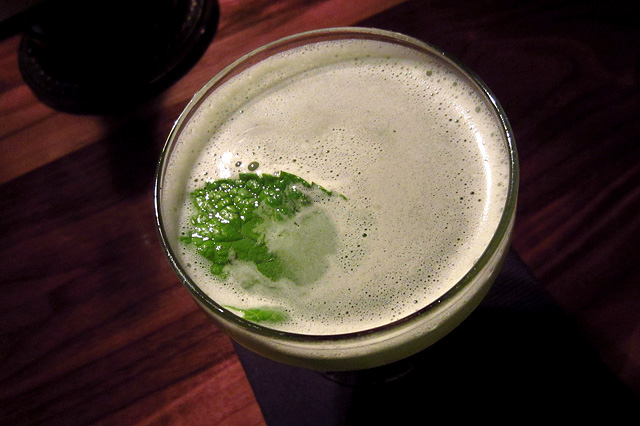 Next up was an Eastside, made with Death’s Door Gin, cane syrup, fresh lime juice, fresh cucumber juice and mint. The classic Southside becomes an even more refreshing summer sipper with the addition of the cucumber; perfect for the patio, even if it’s a dark, smoky one in North Park. 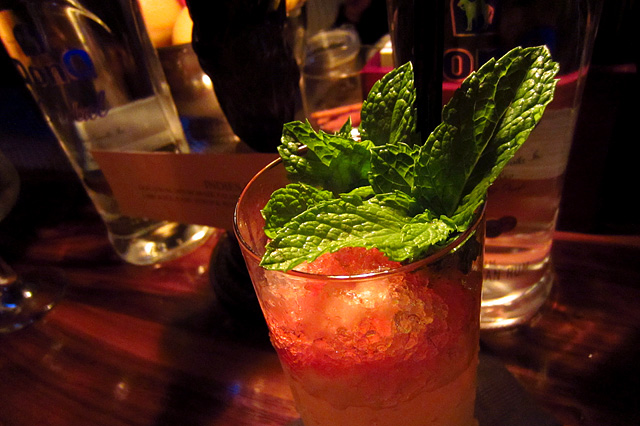 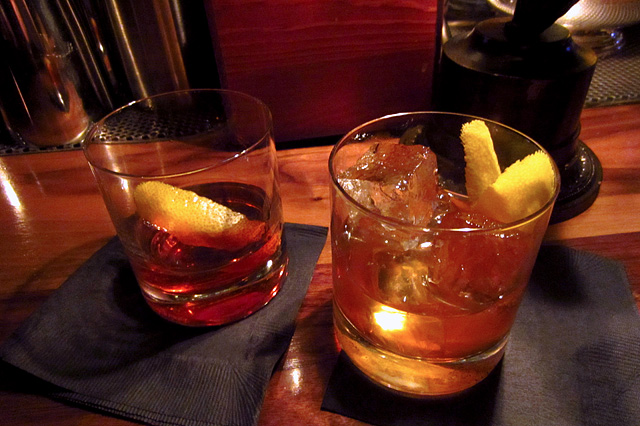 It all came full circle in our final round, with Caroline ordering a Sazerac while I went with an Old Fashioned. Sipping on classic whiskey cocktails, listening to The Get Down Boys doing their thing on stage, the bar doing a brisk business: it was sometimes hard to tell if this was the 213 or the 619. Not that it mattered; either way, we were in Seven Grand.