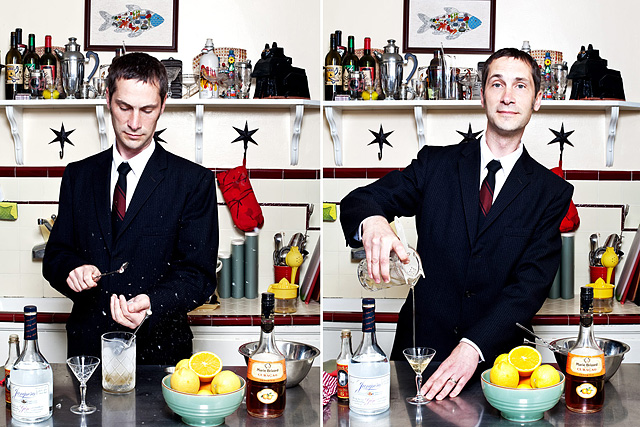 Ellestad is currently Unix Systems Administrator for the University of California, San Francisco and bartends 2-3 nights a week at Heaven’s Dog. He’s garnered considerable respect and acclaim from the global cocktail community for making all 750 cocktails in the Savoy Cocktail Book. Ellestad documented that remarkable journey in his blog, Savoy Stomp, an invaluable resource for anyone with even a casual interest in cocktails.

After the jump, Ellestad shares some insights into the Savoy Cocktail Book project, as well as a recipe for one of the six gin cocktails he’s featuring at the Eveleigh on the 17th.

What inspired you to embark on the Savoy Cocktail Book project?
At the time, I was a host on the eGullet.org forums and looking for some way to increase my understanding of classic cocktails, along with increased interest and participation in our Cocktail and Spirits forum. As those goals go, it was certainly a success. Enough of a success, that I launched the blog based on the popularity of the discussion thread.

The Final Three that remained were Jerry Thomas‘ Bartenders Guide; Charles Baker, Jr.‘s The Gentleman’s Companion; and the Savoy Cocktail Book. Jerry Thomas is the Ur-cocktail book, but seemed like too much work as regards to home-made ingredients. Charles Baker, Jr. is an awesome writer, but it seemed like it would be too much work to parse the recipes and/or massage them into something drinkable. Finally, the Savoy Cocktail Book‘s art was a big plus. The Art Deco-style illustrations of Gilbert Rumbold are just awesome.

You made all 750 recipes, how long did that take? Any cocktails/ingredients in particular that really posed a challenge?
I started the project on eGullet in June of 2006. I finished the cocktails proper, with some breaks and time off, posting the Zed cocktail to Savoy Stomp in April of 2011. I finished most of the other drink categories with the Absinthe Frappe a year later in April of 2012. I still have to figure out a strategy for the Punch and Cup sections of the book.

As regards to ingredients, remember, I started the project in 2006. Absinthe was still thought to be illegal and Haus Alpenz had yet to launch its line of vintage ingredient inspired Spirits and Liqueurs. I made everything from Swedish Punch to Plum Gin to Hercules.

Any favorite cocktails and/or any that you would be happy never to make again?
I’m always interested in new flavors and interesting combinations. My favorites are often those which fall outside of the simplified canon of modern cocktails. I am especially fond of things with a large proportion of Vermouth or other aperitif wines.

I would be perfectly happy to never make another Pousse Cafe, (layered, liqueur based cocktail).

“No Savoy Cocktail Book Night would be complete without Ada Coleman’s Hanky Panky on the menu.”

Hanky Panky Cocktail
“No Savoy Cocktail Book Night would be complete without Ada Coleman’s Hanky Panky on the menu,” said Ellestad. “Ada was the Head Bartender at the Savoy Hotel prior to Harry Craddock, and her Hanky Panky was created for a guest who immediately exclaimed, ‘By Jove, that is a real Hanky Panky!'”

Photo by Gabriela Hasbun for Imbibe Magazine, via Facebook.