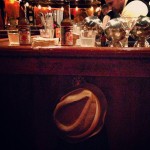 Hey Bartender is a documentary about the renaissance of cocktail culture, directed by Douglas Tirola. Set against the backdrop of craft cocktail bars, with comments from leading bartenders across the country, the movie follows two bartenders, Steve Schneider (Employees Only) and Steve “Carpi” Carpentieri, the owner of Dunville’s in Westport, Connecticut. Hey Bartender debuted at this year’s SXSW Film Festival, and after its theatrical premiere in New York last month, embarked on a barnstorming tour of limited runs, including a week-long run in Los Angeles. On the opening day of Hey Bartender’s LA run, I sat down with Tirola, Schneider and Carpentieri at the historic Musso & Frank Grill, where legendary bartender Manny Aguirre was behind the stick. 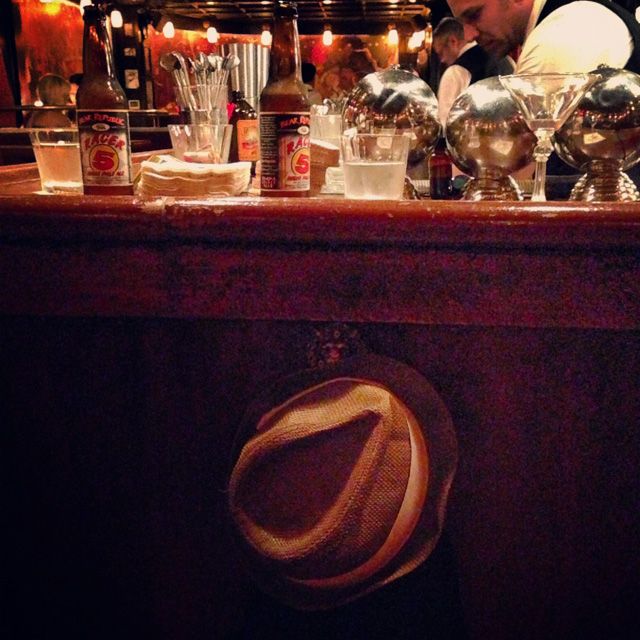 Steve “Carpi” Carpentieri sipped his Manhattan and looked back at how he first became involved with Hey Bartender. “Douglas had come into [Dunville’s] a few times, and mentioned he was considering a documentary on the corner pub and the cocktail industry,” said Carpentieri. “Could he pick my brain, could he talk to me? I was kind of flattered, why would someone be interested in my story, a small corner bar in New England? But he said it had something to do with our longevity and the unofficial town hall that we became in our community. And although flattered, at the same time it felt risky and I was reserved, just because I’m going to open my life up, and there has to be an innate trust that he’s going to represent everything fairly. But I had a good feeling about him, he comes in and says ‘Listen, this is it.’ And he was true to his word. It’s wonderful.”

Tirola already had a history with Dunville’s, which helped ease Carpentieri’s concerns. “Because he’d spent some time in the community, he had been in, it wasn’t like his first time. Not a regular, but a familiar face. He’s been coming here for a couple of years, he didn’t scout this out and talk to me in a month.”

Filming began at the end of 2009. The project would take a few years to complete—there were periods when a couple of months would go by without filming, and other times when Tirola and his crew were shooting at Dunville’s a few days in a row.

In Hey Bartender, we learn that Carpentieri and Dunville’s are going through a rough patch. A former VP at Citigroup, Carpentieri originally acquired Dunville’s with the intent of flipping it in five years. Nearly two decades later, he’s still the owner and behind the bar. At one point in the film, Carpentieri is told about Tales of the Cocktail, the cocktails and spirits festival that takes place every July in New Orleans. It’s a fateful decision for Carpentieri—whether or not he should go to Tales, seek advice and immerse himself in seminars, and hopefully return with ideas to help his struggling bar. “I had no idea,” he said. “It’s been going on for a little while now, so to come late to the game, to the renaissance of the cocktail and to Tales, it was like a double-edged sword for me.”

The journey to Tales began with a couple of distributors, who told him, “‘You know Steve, we noticed your business has been up and down a little bit lately, during the week it’s a little bit off.’ The economic downturn had something to do with it, increased competition, and us kind of falling asleep at the wheel. Any time the market was good or bad, it really didn’t affect us, and the correction in the market used to take a few months or whatever and we’d weather the storm and that’s it, boom, business was back. This time, it was sustained—2008, 2009 and even into 2010, the struggles were there. Once the economy flipped around a little bit, we leveled off, became profitable again and what have you, but we were still way short from the glory days. And some of the distributors came in and said, ‘There are a lot of people that are instituting cocktail programs. They’re easy, we’re willing to help. We’ll sit down, figure out some of your bestsellers, you come up with a couple of drinks, and we’re more than happy to print the menus. We’ll send a rep in, we’ll do some promotion.’”

Carpentieri didn’t embrace the suggestion initially. “It’s not us. It’s almost defining me, not my clientele. We don’t do that, it’s just my tunnel vision. And he said, ‘You know what, there’s a great industry thing going on, and if you can, the one to go to is Tales.’ And that’s when it clicked in my head, and actually Douglas had mentioned it. I went online, did a little research, and the next time Douglas came in I said, ‘Tell me a little bit more about Tales.’ And he said, for anyone who wants questions answered, [Tales] is the Encyclopedia Britannica—dating myself, it’s not the Google or Bing or whatever it is—you will get every answer you need to know down there, you’ll get to talk to some of the best people around, and it will help you make a decision. And he was actually the one who pushed and said, ‘Just do it. If the restaurant isn’t going to survive you not being there for four or five days, then you have a whole other set of problems than just what cocktail program you have. They’ll be able to handle it.’” 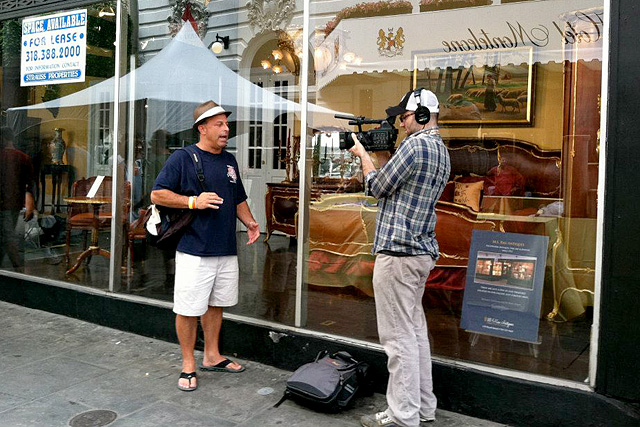 Carpi at Tales of the Cocktail | Photo courtesy of Hey Bartender, via Facebook

In a scene that elicits cheers from audiences, Carpentieri arrives in New Orleans for the 2011 edition of Tales. “It was a great year, because I had the opportunity to meet the [Employees Only] guys, who had the regulars, the non-transient clientele,” he said. “They have people come in because of their popularity and are in and out, but they have a core business. They established something incredible. Douglas said, ‘We’ve been filming down there,’ so I went there a couple of times before Tales, I had to check it out. I left my bar on Sunday night at 11 o’clock, would drive down there to see what was going on and was just flabbergasted.” 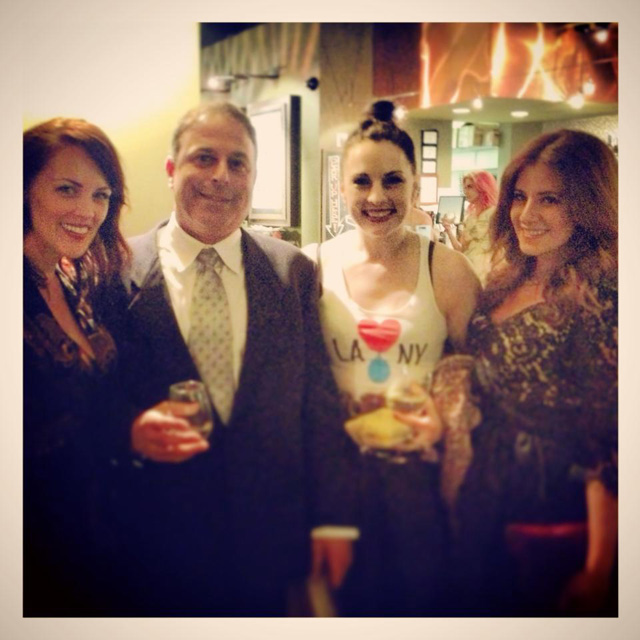 Schneider was already well-known in the cocktail community prior to Hey Bartender, and the movie will no doubt expand his notoriety beyond the industry. Carpentieri is the bartender who will capture the general public’s attention, the everyman who takes a leap into the unknown and is able to rejuvenate his business. At the raucous afterparty that followed the Los Angeles premiere, Carpentieri was frequently engaged in conversations with LA bartenders, who came out in force to attend the screening. To no one’s surprise, his personality was exactly as it was depicted in Hey Bartender—soft-spoken, funny and self-deprecating. As Tirola would say in a subsequent interview, “Carpi” gives Hey Bartender its soul.

On Carpentieri’s last night in LA, we went on an abbreviated bar crawl, starting with a round at Bestia, followed by a drink at Cole’s Red Car Bar and a peek into The Varnish, and then meeting up with Tirola for drinks from Jason Bran at The Roger Room. Though we were one and done at each bar, there was enough time for Carpentieri to admire the massive oven at Bestia, Cole’s historic interior and the lively scene inside The Varnish.

As we drove to Bestia, Carpentieri talked about the warm welcome he’s received from the craft cocktail community. He recounted a recent conversation he had with Employees Only partner Dushan Zaric, who called to tell him about a drink that he thought would work well at Dunville’s. Carpentieri noted with deep appreciation that Zaric—who’s busy running bars, opening new ones, and rolling out The 86 Company releases—took the time to call after he saw something that inspired a drink for Dunville’s. Los Angeles certainly embraced Carpentieri, literally and figuratively—Bestia bar manager Kristina Howald stepped out from behind the bar to give him a hug, and Cole’s bar manager Brent Falco offered to take him on a sightseeing tour of LA the next time he’s in town.

“Charlotte Voisey from William Grant was kind enough to ask if I had any interest in working the [Manhattan Cocktail Classic] gala,” he said. “If she had asked me that a year ago, I would have said ‘sure’ and gone home and called a couple people and been like, ‘What’s this Manhattan Cocktail Classic all about’? So when she said that it was almost humbling, because I realized the gravity of that. It’s almost like being on the minor league team and then pitching in the World Series. It was humbling in that someone actually had the belief that I could to do that, and more importantly that I would fit in and make it interesting.”

“My line is, ‘Anyone can pour a drink.’ They really can. It takes a special person to turn that drink into a cocktail,” said Carpentieri. “A drink is, ‘Here’s your drink,’ and we’re done. Even if you’re making the same thing, not necessarily craft, but the art of it, the hospitality. ‘Cocktail’ by definition is the libation itself, but it’s also the presentation and all the accoutrements that go with it. The cocktail also means hospitality, and that’s one thing over the last couple of years doing this project, that’s what everyone really drove home, especially Dale DeGroff. He said in the movie, ‘It’s contagious.’ If you’re working with another guy in the bar, and no one is ordering drinks from him because everyone’s ordering drinks from you, it’s not that your drinks are better, but because you’re fun, they want to come in and talk to you. And it’s only a matter of time before that guy either gets on board or takes the bus.”

*Simple syrup: in a sauce pan bring 1 cup of water and 1 cup of sugar to a boil. Stirring occasionally. Reduce heat and add one habañero pepper cut in half. Simmer for approximately 15 minutes. Strain to remove pepper and chill. For a little less spice, simmer for approximately 7 minutes, remove pepper and continue to reduce for another 8 minutes.