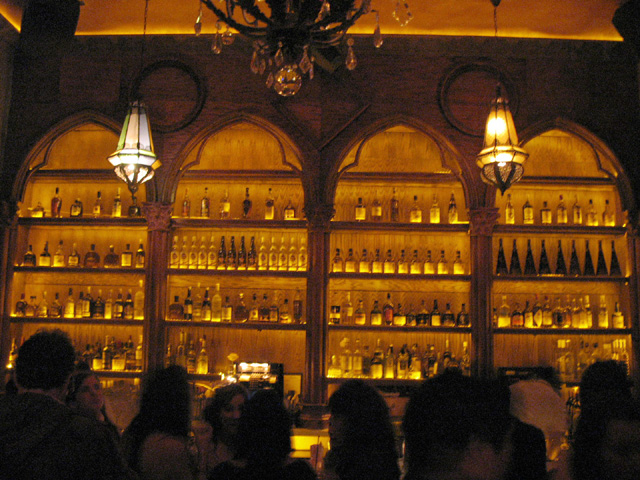 “My mojito in La Bodeguita, My daiquiri in El Floridita.” ~ Ernest Hemingway

Hemingway’s handwritten tribute to his favorite cocktails can be found at La Bodeguita del Medio, one of his regular haunts in Havana. Papa would no doubt feel right at home at La Descarga, the East Hollywood bar that opened last Tuesday to great acclaim. La Descarga is a collaboration between brothers Mark and Johnnie Houston, Steve Livigni (former GM at the Doheny), and Pablo Moix (Bacardi portfolio mixologist, previously at STK). Having missed the opening night bash, I was eager to visit the rum-centric bar for myself. Thankfully, fellow Drunken Army officer Caroline on Crack was way ahead of me and invited me to meet her at La Descarga last Friday. 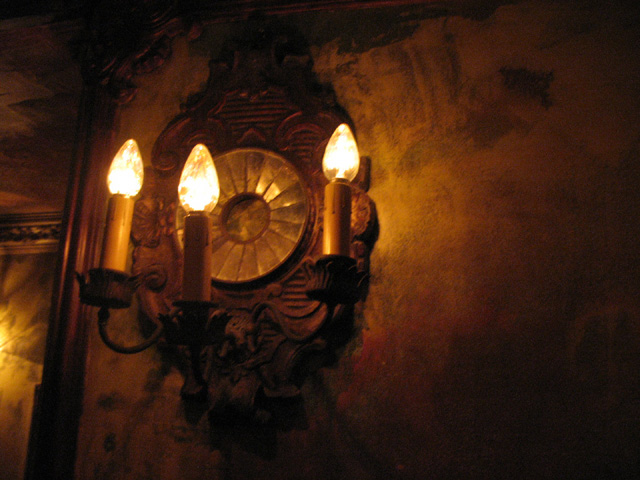 I arrived early for Caroline’s reservation time, but rather than make me wait, the friendly doorman promptly waved me in. Once inside, I was greeted by the lovely hostess, who showed me to the entrance of the bar proper. I crossed the threshold and suddenly I was in the Old Havana of pre-Castro Cuba. Gazing down on the main room, it’s instantly apparent that La Descarga is a looker: a handmade, double-height bar dominates one wall, while wrought iron railings, antique sconces, and imported Cuban tile add to the authentic, immersive experience. Touches of beautiful decay give the space an aged look of bygone glory, from the dilapidated ceiling to faded wall paint. 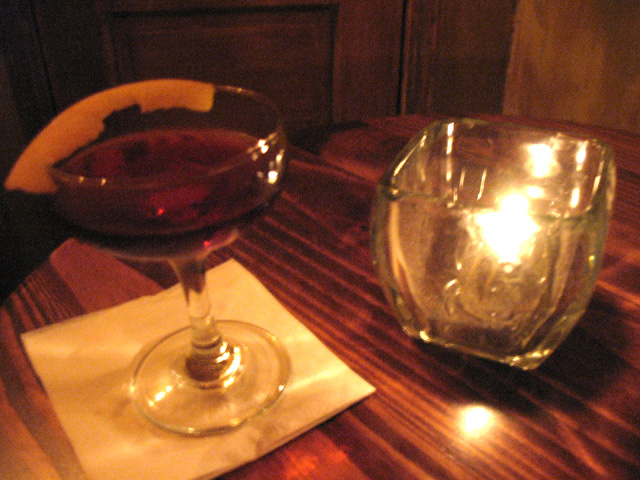 I sat down at the bar and ordered a Tapping the Admiral ($13): Zaya rum, Carpano Antica, Cherry Heering and bitters. My cocktail was mixed by Deborah Stoll (Squid Ink), who told me the Admiral was her favorite on the menu. It’s easy to see why: the vanilla and coffee notes of the Zaya (distilled from molasses and aged 12 years), the sweet vermouth and black cherries, and a hint of smoke at the finish were a potent combination. It was a delicious cocktail and a promising start to a great evening.

Although the specialty cocktail menu only has rum-based drinks, plans call for non-rum cocktails to be featured as well. You can also choose from a list of 70 rums, or a smaller selection of whiskies and other spirits if rum doesn’t do it for you. Rum flights will be available shortly, but for now you can sip your spirits neat in the cigar lounge, a more intimate space located down a hallway from the main room.

By this time, Caroline and her boyfriend had arrived. Caroline suggested we grab a few seats opposite the bar, which turned out to be an excellent idea as the bar quickly filled up. For her first cocktail, Caroline ordered the Honey Swizzle ($12), featuring the anise-flavored Aguardiente Cristal. The anise was present, but it didn’t dominate; the cocktail was a nice balance between sweet and citrus.

Next up for me was Pappa’s Daquiri ($10), made with Bacardi Carta Blanca, Maraschino Liqueur and grapefruit. The flavor profile was surprising: initially strong with citrus and tartness, which then segued into an unexpected smokiness. Very enjoyable and a nice way to follow the Tapping the Admiral. Caroline’s second drink was the signature La Descarga Daquiri ($9), made with Diplomatico Anejo Rum, lime and sugar. Smooth and dangerously drinkable. Like the El Floridita daiquiris Hemingway wrote about in Islands in the Stream, our second round cocktails “had no taste of alcohol and felt, as you drank them, the way downhill glacier skiing feels running through powder snow.”

On separate occasions, Steve and Pablo sat with us to share the thought processes that went into the cocktail menu and interior design, the happy circumstances that brought the team together, and their ambitious plans for the future. We’re very interested to find out what they’re going to do with an adjacent 2,000 sq.ft. space, which nearly doubles the bar’s overall capacity.

Steve especially wanted to set the matter straight on a couple of points about La Descarga:

Pablo mentioned an upcoming creation called the Next Level: a cocktail made from a hollowed-out ice ball, resting on a bed of crushed ice, with straws for imbibing. If you think that sounds amazing, check out an image of the Next Level in this slideshow from LA Times Magazine. Pablo also told us that, besides the rum flights, punch bowls will be on the menu soon.

Beginning at 10pm, and hourly throughout the night, a brief show takes over the venue. As the percussion set the rhythm, a dancer and sax player performed a sensual duet. The dancer made her way to the floor, interacting with seducing guests before returning to the mezzanine. According to Steve, the show gets more risqué as the night progresses. By the time the band returned for its second set, couples were dancing to the piped-in music, raising the energy and noise to higher and higher levels. 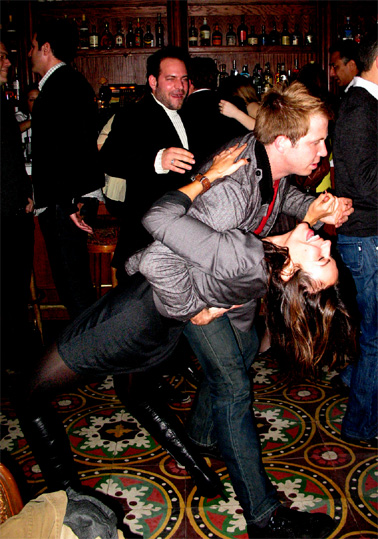 A dip will do ya at La Descarga.

My final cocktail of the night was the Tropical Holiday ($12), made with Rhum JM Blanc, Velvet Falernum, lime, sugar, soda and bitters. Unfortunately, this was the only sour (or should I say bitter?) note of the night. We couldn’t figure out where the mix went wrong, only that something about it was funky. (And don’t get me wrong, I like the funk; I may be the only blogger in town that likes The Tar Pit’s Trident.) Two palates I trust, Food GPS and e*star LA, raved about the Tropical Holiday in their reviews, so I know I’ll give it another go next time.

Missing from that night’s cocktail menu was the Bad Spaniard, which the LA Times calls “a guilty pleasure made with Cruzan Blackstrap Rum, Amaro Averna, sweetened condensed milk, one whole egg yolk and cinnamon.” It should be available this week, as good a reason as any to pay a return visit.

As we left La Descarga and stepped into a light rain, my thoughts returned to Hemingway’s note; what would he jot down if he were in 21st century Los Angeles? I have a feeling it would be something like this: “My mojito and my daiquiri in La Descarga.”

Be sure to check out Caroline on Crack’s recap of the night at La Descarga (with video!).

Extra Credit
For more on Hemingway in Cuba, you can read “The Old Man and the Daiquiri” by Wayne Curtis (author of And a Bottle of Rum: A History of the New World in Ten Cocktails) and the Havana chapter of Michael Palin’s Hemingway Adventure.