Canadian Club Reserve and Classic: Award-Winning Whiskies from the City of Roses

Canadian Club is a pre-barrel blend of corn, rye, rye malt, and barley malt distillates, aged in once-used American bourbon casks. The Canadian Club range totals seven expressions, from the popular 6 Year Old to the Sherry Cask, which is aged in white oak barrels for at least eight years, then finished in Spanish sherry casks. Limited editions include the 30 Year Old Reserve, released in 2008 to celebrate Canadian Club’s 150th anniversary.

A bestselling member of the Beam Global portfolio, Canadian Club is also known for its interesting advertising over the years. In the “Hide a Case” campaigns, drinkers engaged in global scavenger hunts to find nearly two dozen cases of CC hidden in farflung locales such as Mount Kilimanjaro, the Swiss Alps, and Death Valley. (By the way, if you’re ever in the Arctic Circle and have some free time, there’s still a case of CC there that has yet to be found.) More recently, CC tapped into the nostalgia for retro cool with the provocative “Damn Right Your Dad Drank It” series, which featured actual Beam employee photos from the 60’s and 70’s.

Since everyone has medals on their minds, it should be noted that the 12-Year won Double Gold and was named Best Canadian Whisky at the 2003 San Francisco World Spirits Competition, while the 10-Year won Gold in 2007. 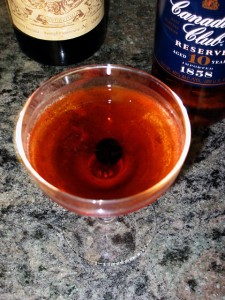 The Reserve 10-Year is smooth and mellow, very approachable for non-whisky drinkers. The Reserve may not have the smoke or legs of higher end whiskies, but its entry-level price point is truly hard to beat.

On the cocktail front, the higher rye and rye malt content makes for a nice Manhattan, using the classic 2:1 ratio of whisky to sweet vermouth. The March/April 2010 issue of Imbibe has a recipe for the Toronto (from David Embury’s The Fine Art of Mixing Drinks), a cocktail that pairs Canadian whisky with Fernet Branca.

A step up from the Reserve, the 12-Year is likewise smooth and approachable, but with more depth and spice. The 10-Year’s sweetness gives way to the Classic’s creamy, rich mouthfeel, enhanced by oak and hints of vanilla and honey. The Classic is fine when sipped neat, especially if you’re looking for something mellow yet balanced and complex.