Last week, the best and brightest young stars in the Southern California culinary world gathered to showcase their talents at the 2010 StarChefs Rising Stars Revue. The tasting gala and awards ceremony, held at the Fairmont Miramar Hotel & Bungalows in Santa Monica, featured food from up-and-coming culinary talent from the top restaurants in Los Angeles, Orange County, and San Diego. All dishes were paired with ultra-premium wines selected by the Rising Star Sommelier. Two featured cocktails came from the Rising Star Mixologists, Eric Alperin (The Varnish) and Julian Cox (Rivera). 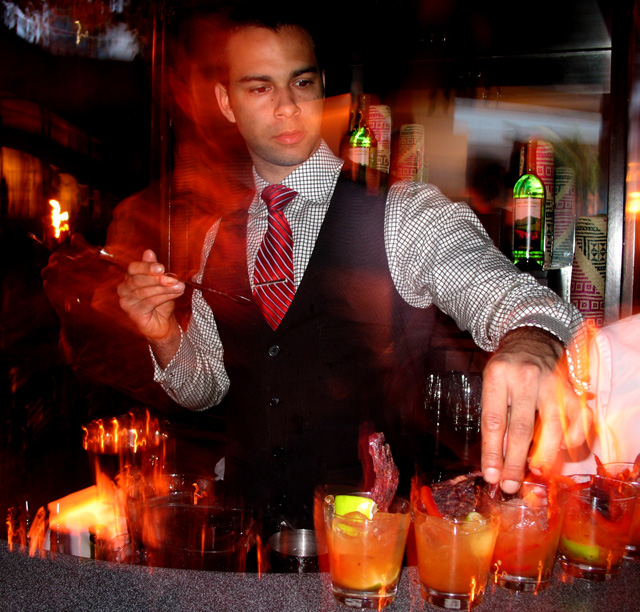 Julian Cox brings the heat with his Barbacoas. 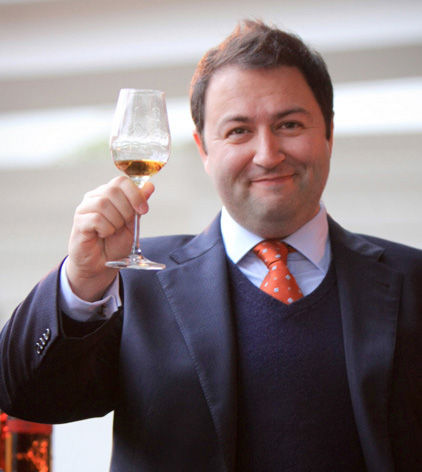 I was invited to the gala by Highland Park (one of the event sponsors), so I was eager to find their booth as soon as I entered the Fairmont courtyard. Julian was set up near the entrance, and he was already busy mixing rounds of his Barbacoa, a Rivera favorite made with Del Maguey Chichicapa mezcal, lemon juice, agave nectar, ginger syrup, chipotle purée, red bell pepper, lime wedges, and garnished with beef jerky. As I enjoyed my smokerrific cocktail, another guest took a sip of his own Barbacoa and pronounced it “the best cocktail I’ve ever had.”

Julian pointed me to the nearby Highland Park booth, where I chatted with Martin Daraz, Highland Park’s US Brand Ambassador. We’d met briefly at the last Seven Grand Whiskey Society event of 2009, when Martin brought bottles of the Highland Park 25-Year and 30 Year Old for us to taste. He mentioned that he was hoping to bring a bottle of the 40-Year in the next couple of months. Getting a chance to sample some Highland Park with someone with the depth of knowledge that Martin possesses was a rare treat. I’ve enjoyed the 12 Year Old before, but this was my first experience with the 18-Year, and I thought it was exceptional. The 12-Year’s familiar notes of smoke, peat, and heather are still present, with the added richness and spice gained from the longer cask maturation. Delicious, velvety smooth, silky sweet…I could go on about the 18-Year. It’s no wonder that F. Paul Facult called it the “Best Spirit in the World” (Spirit Journal, June 2005).

Eric Alperin mixes a round of Highlanders for guests.

Eric was stationed on the other side of the courtyard, next to the stage. There, he was serving the specialty cocktail he created for the gala: the Highlander, made with Highland Park 12 Year Old and Cherry Heering (recipe at the end of this post). It’s a simple, deviously tasty cocktail that went over well with guests. 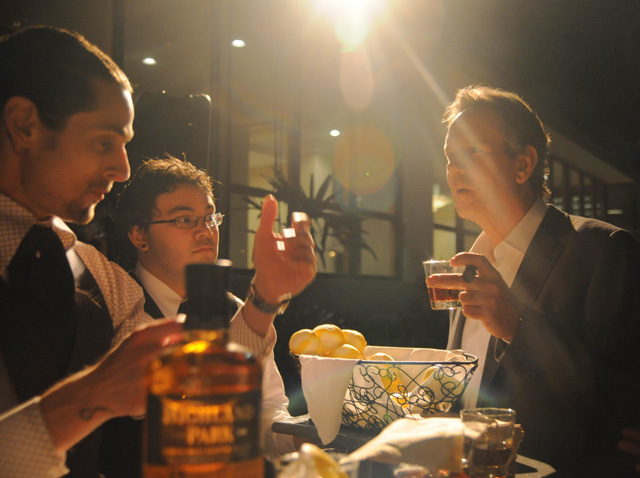 And if the Highlander is good enough for Thomas Keller, well, that pretty much says it all.

Did I mention there was food? 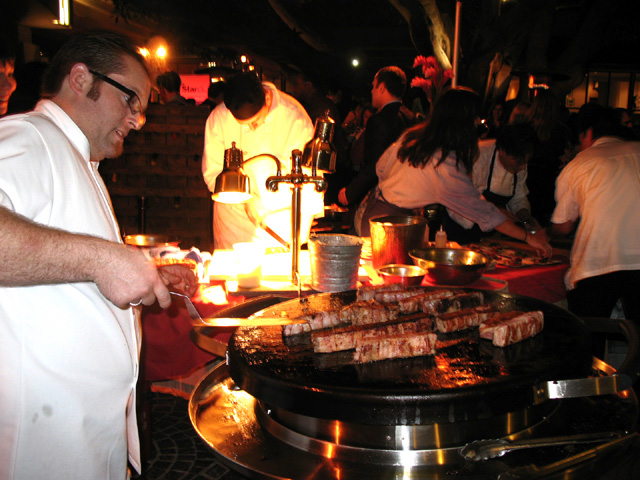 A whole lotta bacon goin' on at the FIG station.

Next to the Highland Park booth was Ray Garcia (FIG) and his Bacon-Wrapped Bacon, a perfectly decadent pairing with the single malt Scotch. The signature FIG dish is a slab of succulent pork belly wrapped in crisp, smoky bacon and served with Sylvetta arugula, Brandywine tomatoes and cocktail avocados. I freely admit I went back for seconds and thirds during the event. 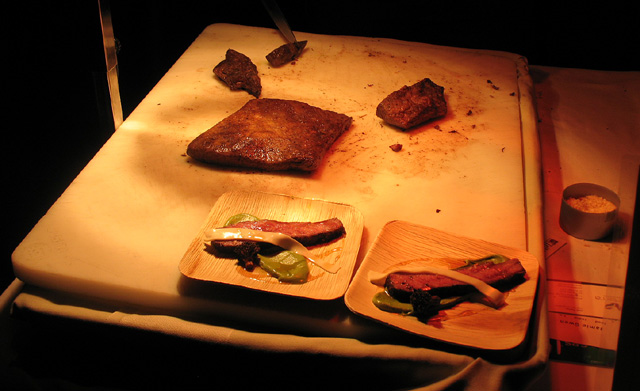 Michael Voltaggio (The Dining Room at The Langham) displayed the culinary skills that took him all the way to the Top Chef Season Six title. Voltaggio’s wonderful dish of sous vide Wagyu short rib, crispy broccoli floret, cream of dehydrated broccoli, and cheddar tagliatelle was well worth the long queue. The Wagyu was extraordinarily tender, the kind of melt-in-your-mouth slice of beef that carnivores like myself swoon over.

Then came time for the awards ceremony, and luminaries such as Keller and Neal Fraser spoke about the Rising Stars they mentored, such as Rory Herrmann and Diana Stavaridis, respectively. My favorite chef story came from David Myers, who talked about how Kuniko Yagi was his server when he was dining at Ubon and she happened to talk about her desire to be in the kitchen. Intrigued by her passion and sensing her potential despite her lack of experience, Myers hired her to work at Sona.

The rest, as they say, is history: in three years she rose from an amuse station to sous chef, and six years after she was hired, the former banker is now chef de cuisine at Sona. Yagi’s parents, who had flown in for the event from Japan, were pointed out by Myers to rousing applause. 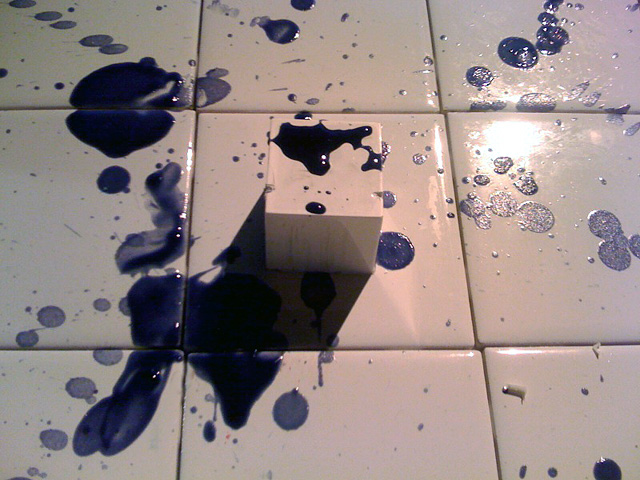 Throughout the event, guests voted for their favorite Rising Star dish, and at the end of the night it was announced that the winning chef was Jordan Kahn, the former pastry chef at XIV. His avant-garde dessert looked like something cooked by Jackson Pollock: a white cube served on a white tile, decorated in Rorschach blots of violet sauce. Breaking through the cube’s white chocolate shell revealed a beet spongecake, cacao fruit, compressed native strawberries and elderflower. It was a remarkable, multifaceted dish filled with flavor, texture and surprises. Exactly the kind of dish you’d expect from a Rising Star.

For more information about StarChefs and the Rising Stars program, visit www.starchefs.com

“The Highlander” by Eric Alperin of The Varnish

Stir in a whisky glass over a big rock of ice. Garnish with a lemon twist.