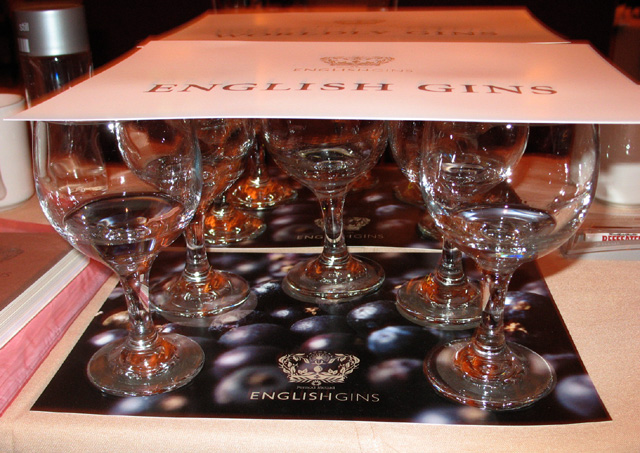 Bartenders and cocktail enthusiasts recently gathered at the Hollywood Roosevelt for the Gin Symposium, presented by the English Gins of Pernod Ricard: Plymouth, Beefeater, and Beefeater 24. The all-day gin immersion was hosted by Audrey Saunders and Simon Ford, with a stellar list of presenters who discussed gin’s history, guided tasting sessions, and mixed cocktails. After the opening reception, we were invited to seat ourselves in the spacious Blossom Ballroom, the original home of the Oscars. I sat in the Cool Kids row, between Joe Keeper (Bar Keeper) and Aaron Vanek (L.A. Cocktails Examiner). Among the items in front of each attendee were ten glasses of gin samples, separated into two groups: ENGLISH GINS and WORLDLY GINS. 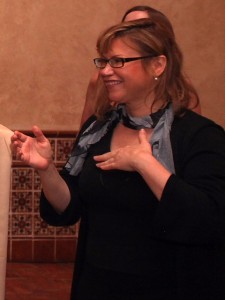 After a welcome from Ford, Saunders talked about the first time she tried gin, an unpleasant experience she had as a teenager. Years later, she opened Blackbird in New York with Dale DeGroff (aka King Cocktail), who introduced her to the gin-based Pegu Club cocktail. She said her first sip was “revelatory,” completely changing her mindset to the extent that she committed herself to learning everything she could about gin. Eventually she’d open her own renowned bar, naming it after that inspirational drink. She closed by saying that knowing gin is “the foundation to making great cocktails.”

HISTORY
Saunders introduced cocktail historians Anistatia Miller and Jared Brown (authors of Shaken Not Stirred: A Celebration of the Martini), who took us through the history of gin. Their interesting, fact-filled session delved into gin’s early beginnings, the development of the gin industry, and the emergence of gin brands, finishing with primers on Plymouth and Beefeater. Along the way, we learned fun trivia galore: the Pilgrims sailed with more booze than water and landed at Plymouth because their beer was running low; during the “Gin Madness” of the 1720s, one out of every four buildings in London was either making or selling gin; the Great French Wine Blight of the mid-1850s (caused by the Phylloxera aphid) destroyed vineyards throughout Europe and France in particular, paving the way for the rise of gin.

TASTING
Then it was time to sip from the glasses that had tempted us from the moment we sat down. Our gin tasting was led by Desmond Payne (Master Distiller of Beefeater and Beefeater 24) and Sean Harrison (Plymouth Master Distiller). Payne began by defining gin, essentially a grain-based neutral spirit traditionally crafted by re-distilling it with botanicals, especially juniper berries. He then differentiated between Distilled Gin (made in the traditional manner) and Compound Gin (the neutral base spirit is mixed with flavorings or additives and there is no second distillation). Payne noted that the most popular style of distilled gin is London Dry, which includes Beefeater and Beefeater 24. London Dry is traditionally made, with no additives after distillation other than water or additional neutral spirit. Plymouth gin is a style of gin that by law can only be produced in Plymouth, England. The Black Friars Distillery is the only distillery in Plymouth and has been in operation since 1793.

After explaining gin production processes, Payne handed off to Harrison, who instructed us on how to taste the gin. First we poured water in each sample glass to cut the ABV to around 20%. To help us understand the importance of smell in the tasting process, Harrison conducted a simple experiment in which we donned nose clips and tasted a bit of powder. Other than an easily discerned sweetness, the powder was hard to identify. When we removed the clips, we could instantly tell it was cinnamon. Next, Harrison explained the “flavor map” that would be used to chart the various gins from Light to Full (richness of flavor) and Simple to Complex (variety of flavor). 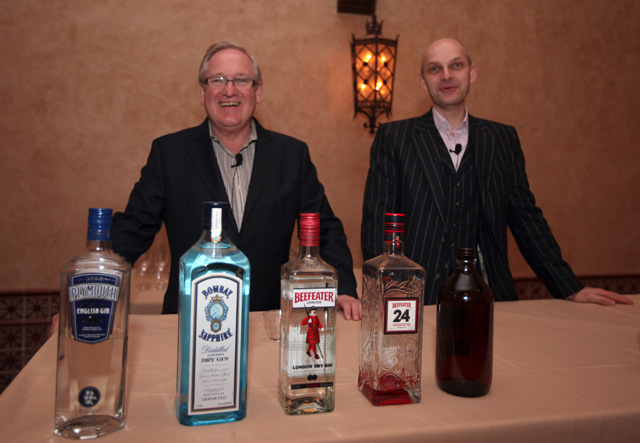 We began with the the English Gins, starting with Plymouth, then moving on to Beefeater and Bombay Sapphire. With each sample, Payne listed the botanicals and noted the nose and palate, and also located the gin on the flavor map. Then came the Beefeater 24, launched last year after Payne spent nearly two years developing it. Building on the nine original Beefeater botanicals, Payne added grapefruit peel, and Japanese sencha and Chinese green teas. The teas assert themselves immediately on the nose, along with citrus and juniper notes. On the palate, the B24 offers the tea aromatics initially, citrus in the middle, and juniper on the back. The finish is long, spicy, and earthy. We finished with Beefeater Summer Gin, a seasonal variation which won’t be released until June, and then only for three months. We were tasting pre-production samples from a mysterious-looking unmarked bottle. For the Summer bottling, Payne added floral botanicals such as hibiscus, elderflower, and black currant to Beefeater’s original recipe. The nose is floral and sweet, and the palate is soft and gentle. The Summer’s flavor profile and 40% ABV (80 proof) should make for excellent seasonal cocktails and punches.

Next we tasted the Worldly Gins, a selection of brands that originate outside of England. Compared to the amount of time spent on the English Gins, we tasted through these gins very quickly. We began with Junipero, from San Francisco’s Anchor Distilling. It’s certainly well-named: juniper is very upfront on the nose and middle palate, with a spicy, aromatic finish. Next was Scotland’s Tanqueray No. Ten, aka T-10. Unlike most gins, T-10 is made with whole, freshly picked fruit and botanicals rather than dried. The result is a gin with a nose and palate dominated by lime and citrus. Then we tasted Bluecoat, which is distilled in Philadelphia. The nose is burnt orange, the palate a strong citrus with a gentle finish. It was back to S.F. for No. 209, which has an initial juniper hit on the nose, followed by citrus zest and spicy notes. The palate is bitter and earthy. We finished by crossing the pond once more to sample Hendrick’s, also out of Scotland. With cucumber and rose petals added during distillation, the juniper is mild on the floral nose. The palate is aromatic, smooth, and sweet with a long finish.


COCKTAIL HOUR
After breaking for Gin and Tonics (and some much-needed snacks), we began the Cocktail Hour with Saunders discussing gin’s versatility in classic cocktails. She likened the spirit to a “liquid spice rack,” with different flavor profiles influencing her choice of gin in a particular cocktail. For example, she uses Plymouth in a French 75 because its softer, earthy notes work well with champagne, while The Last Word calls for B24 or Junipero to pair with the Green Chartreuse, maraschino, and lime.

Saunders handed off to Beefeater Global Brand Ambassador Dan Warner, who introduced UK and L.A. mixologists as they discussed and prepared the afternoon’s cocktails (recipes at the end of this post). 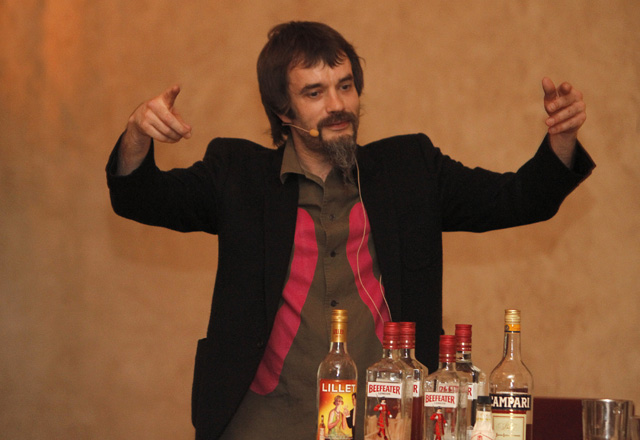 First up was London’s acclaimed Nick Strangeway, the 2008 Tales of the Cocktail Mixologist of the Year. During Warner’s intro, Strangeway walked back and forth behind him, doing a mic check by dropping a stream of f-bombs (“fook fook fook fook fook fook…”) that never let up during his demo. While servers distributed samples for us, Strangeway mixed his cocktails, Myatt’s Mistake (a rhubarb-infused gin aperitif) and Earl 75 (a French 75 variation).

Strangeway would be a hard act to follow for most people, but Eric Alperin (The Varnish) presented his segment with typical aplomb. Alperin said that Beefeater is the go-to gin at the Varnish before mixing an Orange Blossom, a gin Screwdriver made with 2oz Beefeater, 1oz orange juice, and .5oz simple syrup, shaken and strained into a coupe.

Next was Chris Edwardes (Blanch House), who featured B24 in both of his cocktails, an Aviation variation called Deviation and the Oscar Wilde. The Roger Room’s Damian Windsor also used B24 in his Gypsy Wine, made with 1oz B24, .75oz Dolin Dry Vermouth, .5oz DOM Benedictine, a dash of Angostura orange bitters, stirred and strained into a coupe.

Then it was Sagatiba US Brand Ambassdor Jamie Terrell and his “assistant” Marcos Tello (First and Hope), who spoke with the oddest-sounding Cockney accent ever. After Terrell mixed his Monk’s Gimlet, Tello (sans accent) demoed his Romanoff’s cocktail, named after the classic Beverly Hills restaurant: 2oz Plymouth, 3/8oz Cherry Heering, 3/8oz grenadine, .5oz ginger syrup, 1oz fresh lime juice, shaken and strained into a Collins glass and topped with soda.

The Symposium concluded with an audience Q & A, and with that our gin immersion was over. I wish we could have looked further at New World, small batch gins, but obviously time restraints had to be factored in. And the gin cocktails, while they sounded fantastic on paper and looked delicious as they were mixed onstage, didn’t quite work as pre-mixed samples. Again, time had to be considered. But these are minor quibbles from an otherwise well-executed event. I definitely learned a lot, and came away with a much stronger working knowledge of gin’s history, creative process, and flavor profiles. 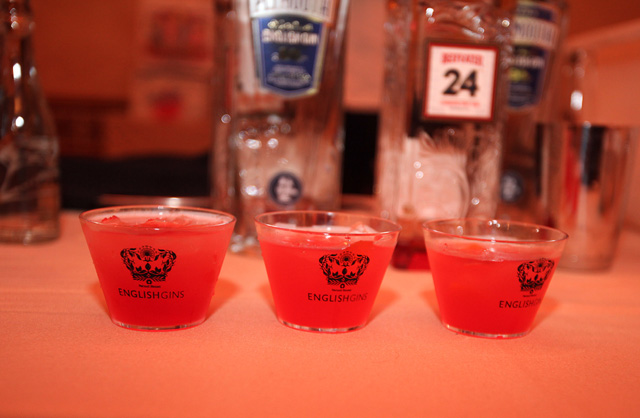