The Nose Knows: Tasting the Dalmore with Richard Paterson 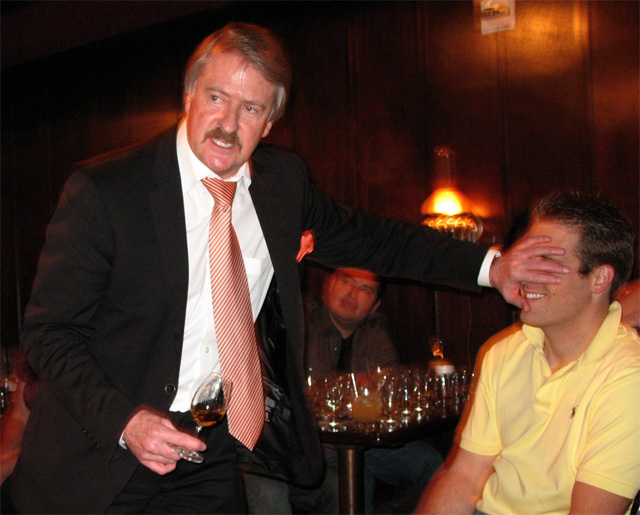 Last month I was invited to sample several expressions of The Dalmore single malt Scotch at an intimate event held at the Varnish. The tasting was conducted by Richard Paterson (aka “The Nose”), third generation Master Blender for Whyte & Mackay, which owns and operates The Dalmore. Paterson is also the author of Goodness Nose and, according to his bio, the first (and perhaps only) Master Blender to appear in a manga. From his first dram at age eight (given to him by his father), Paterson went on to become a Master Blender at just 26 years old, and now travels the globe as a brand ambassador, Scotch evangelist, and representative for all of Scotland. Paterson had literally just flown in from San Francisco; his luggage was tucked away in a corner of the bar.

It'll cure what ails ya: The Penicillin.

The Dalmore tasting was hosted by Varnish Bar Manager Eric Alperin, who was ably assisted by bartender Devon Tarby. The event began with servings of The Penicillin, the wonderful cocktail created by New York mixologist Sam Ross (Milk & Honey, Little Branch). I’ve had the Penicillin many times at Comme Ça (where Ross launched the bar program), and the Varnish does a great version with 12 Year Old Scotch, lemon juice, honey and ginger syrup. The mixture is shaken and strained into an Old Fashioned glass lined with an Islay mist, then garnished with a candied ginger. It’s a refreshing drink perfectly suited to whet our palates for the Scotch to come.

After cocktails and introductions, we took our seats and Paterson began. He quickly launched into a whirlwind history lesson that spanned centuries and crisscrossed the Atlantic. Without the benefit of notes, he mentioned an astonishing number of important dates, many with only a tangential relationship to whisky. Then it was a quick tour of Scotland and its whisky regions, finishing at the Highland town of Alness, where The Dalmore distillery is located.

Although The Dalmore was founded in 1839 by Sir Alexander Matheson (thanks to his profitable opium trade), Paterson traced The Dalmore’s history to 1263, when an ancestor of the Clan MacKenzie saved King Alexander III from being gored by a stag. In return, the grateful king allowed him to bear a stag’s head in his coat of arms. The MacKenzies bought The Dalmore from Matheson in 1886 and owned the distillery for nearly a century; thus the family’s 12-pointed stag emblem adorns every bottle of Dalmore. 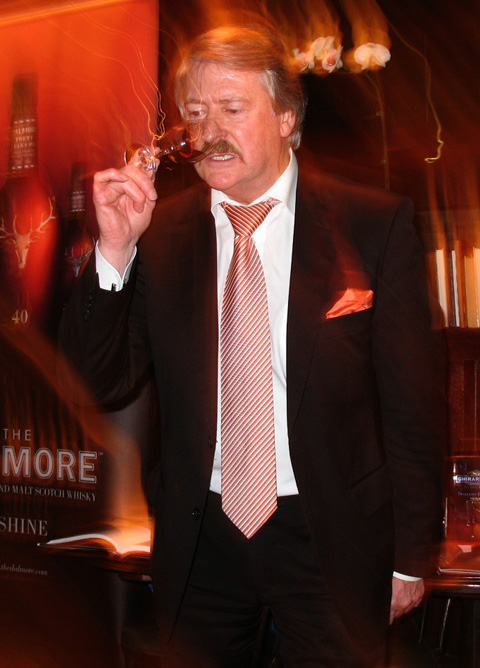 The Tasting
Then it was time for the tasting. Well, almost. First, Paterson described the nosing glass, with a balloon shape designed to funnel the aromas into your nose for maximum appreciation of the whisky’s character. He poured a bit of whisky into the glass, swirled it, and to our surprise tossed it sideways to the floor. Then he poured a dram into the rinsed glass, taking pains to show us how to hold it properly at the bottom, rather than palming it. Paterson then brought the glass all the way up to his face, said “hello” to the whisky, and inhaled deeply. He pulled the glass away, brought it back up and said, “how are ya?” before inhaling again. He did this a third time and said, “I’m well, thank you very much.” Then he took a sip. As he gently hummed, Paterson kept the whisky in his mouth, rolled it under his tongue, to the sides of his mouth, then the back. All of this is done to give the whisky time to open up and reveal itself. Finally, he swallowed and took a deep, open-mouthed breath. He paused, then released the breath.

As Paterson finished his lesson, our first drams were poured, and we were ready to begin.

THE 15
Aged in bespoke Matsusalem, Apostoles and Amoroso sherry butts.

1263 KING ALEXANDER III
During the 1970’s, 80s and 90s, Paterson filled French wine casks, Madeira drums, sherry butts from Jerez, Sicilian Marsala barrels, port pipes from the Douro and Kentucky bourbon barrels with young Dalmore spirit. Paterson monitored the casks over the decades until the contents had matured, then united them in this rich, complex whisky. 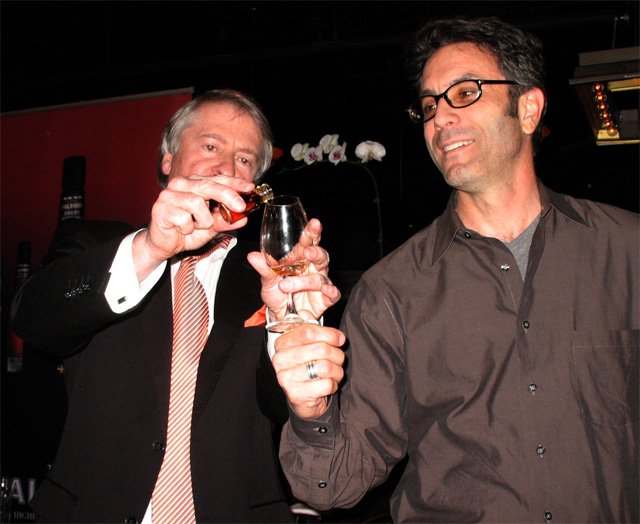 The Dalmore 62: "The most expensive thing he'll ever have in his mouth."

The Dalmore 62
After we tasted the four expressions, Paterson asked for a volunteer. One lucky bastard gentleman was invited to taste what Paterson revealed to be The Dalmore 62 Year Old, one of the rarest and most valuable Scotch whiskies in the world. As Paterson told us, it’s “the most expensive thing he’ll ever have in his mouth.” The 62 is comprised of four casks of single malt, dating from 1868, 1876, 1926 and 1939. Only 12 bottles were produced in 1943, each with their own name on a handwritten label. According to the BBC, a businessman paid £32,000 (over $58,000 at the time) for a bottle of the 62 at the Pennyhill Park Hotel in 2005. Amazingly, he shared the bottle (named “Matheson,” after the Dalmore founder) with some incredibly lucky friends and they nearly finished it in one night. Of the remaining bottles, ten are in private collections, while “The Kildermorie Bottle” is owned by Whyte & Mackay. It was from this exceptional bottling that Paterson poured a dram. He guided our friend through the once-in-a-lifetime tasting, and at the moment he told his pupil to swallow, Paterson set off a confetti popper, startling everyone and ensuring we’ll have a lasting memory from our afternoon with The Nose.