Praise the Lard and Pass the Champagne at First & Hope 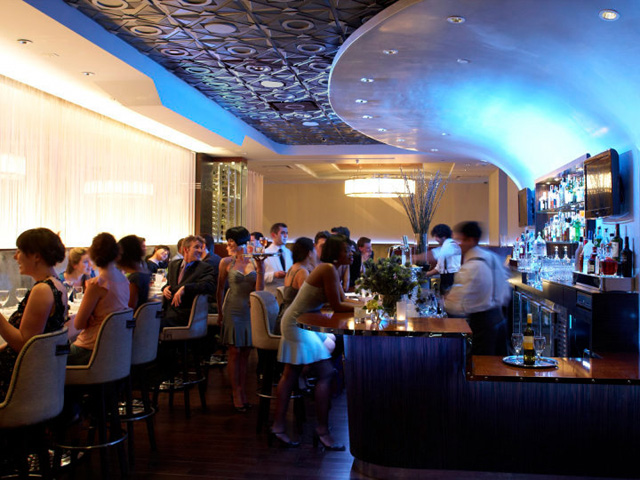 Discreetly located across the street from Walt Disney Concert Hall in an unassuming strip mall, First & Hope supper club brings style, sophistication, and a welcome sense of fun to the downtown dining scene. Much of that playfulness comes from Executive Chef Shelley Cooper, a native of Memphis whose refined technique and love of American comfort food have culminated in a uniquely modern take on Southern cuisine. Don’t let names like Hamburger & Its Helpers or Duck-Duck Goose fool you, there’s some serious cooking going on here.

After I was invited to review First & Hope, I immediately thought I should bring my friend Scot (The Red Bearded Hipster), who is not only a fellow cocktail enthusiast but an Atlanta ex-pat who could offer insights that my Yankee sensibilities would surely miss.

When you enter First & Hope, it’s hard to believe this debut venture from co-owners Parker Martin and Terry Brewer has only recently opened. Designer Jeremy Ingram has imbued the 6000 square foot space with a timeless quality, the Art Deco era referenced in repurposed bronze and gold panels, subtle nickels, and contrasting ebony macassar wood. Separated from the dining room by an LED curtain, the bar area is an intriguing mix of 1940s glamour and modern amenities: the curvilinear backbar; classic movies continuously displayed on two flatscreens; the 32-bottle Enotech. Adding to the allure are the chic wardrobe and uniforms created by Mad Men costume designer Allison Leach.

As we scanned our menus, we noticed how brightly the room was lit, which seemed at odds with the idea of evoking a supper club from yesteryear. Then there was the otherworldly blue lighting that cycled between less intrusive colors. When the adjectives describing a venue are along the lines of “glamorous,” “chic,” and “timeless,” there’s a bit of a disconnect when “otherworldly” is suddenly thrown in the mix. 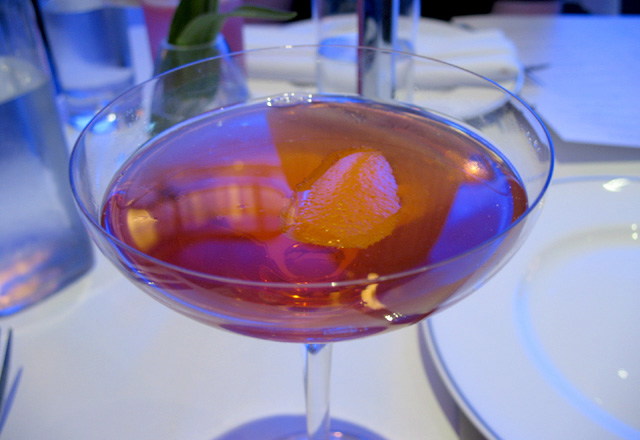 Although I had been to First & Hope for a few events prior to its grand opening, this was my first time ordering from the cocktail menu created by Beverage Director Aidan Demarest and Mixologist Marcos Tello. Fans of the bubbly will be glad to know that seven of First & Hope’s eleven classic cocktails feature Charles Heidsieck Champagne. All cocktails are priced at $12.

I started with a Seelbach, a blend of Woodford Reserve Bourbon, orange curaçao, and bitters, topped with Champagne. It’s a nicely balanced cocktail, served in an elegant coupe, and perfectly suited to the sleek surroundings.

Scot went with the Tequila Sunrise: Corzo Tequila, cassis, grenadine & fresh lime, served over ice in a highball. I took a sip and knew right away what I’d order for my second round. It’s a dangerously good cocktail that goes down very easily.

As we enjoyed the cocktails, our server explained that the dinner menu was divided into Small tapas-style bites, Medium appetizer plates, Large entrees, and Extra Large entrees for two. Though Extra Large dishes like the Cowboy Steak Dinner for Two looked tempting, we opted to order something from each of the remaining sections to better appreciate the full range of Cooper’s menu. 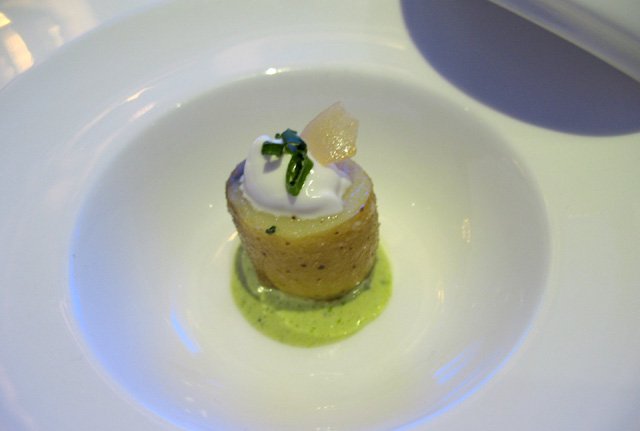 An amuse-bouche soon arrived: a baby potato topped with sour cream, chives, and a garlic chip, served with Green Goddess dressing. A server told us, “you’re encouraged to eat with your hands,” which we did. Presumably, we were supposed to use utensils for the remainder of the meal. 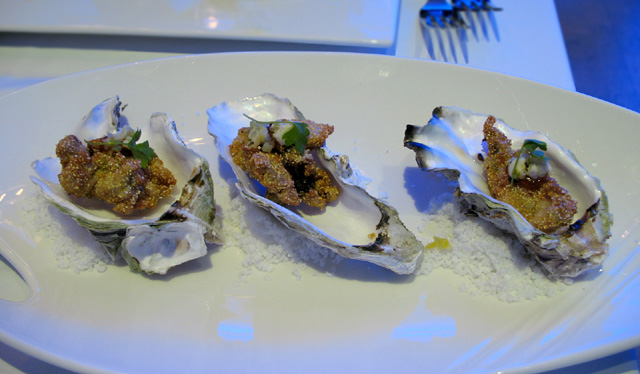 By request, our Small and Medium dishes arrived together. We started with the BBQ Fried Oysters ($11), served with bacon BBQ sauce and celery bleu cheese tapenade. I had sampled the fried oysters at a pre-opening event, and they were just as good as I remembered them. It’s a good thing we had to share the three oysters; we needed plenty of room for the onslaught to follow.

From the Medium section, the All-About-the-Cheese Mac & Cheese Flight ($16) features three pots of macaroni and cheese variations, served on a slab of black slate:

Each mac & cheese is identified by its name (handwritten in chalk), with matching accents such as cheese wedges, almonds, popcorn, and even a few ounces of oatmeal stout. Tops for me was the brie/lasagna, followed closely by the porter beer/corkscrew pasta. I like goat cheese, but something about the “Drunken Goat” (as the dish was labeled) was a bit off. By necessity the black slate has to have a large footprint to hold the entire presentation, so along with our cocktails and the other dishes, our two-seat table felt a bit crowded.

Our other Medium selection was the Praise the Lard! ($18), featuring crispy pig’s ears over heirloom tomatoes, bourbon-braised pork cheeks with a crisp soft egg, and Kurobuta pork belly over creamy grits. The latter was “christened” by a server, who poured warm maple dressing once the plate was served. As Josh from Food GPS would say, this was a serious dose of “Vitamin P.” I couldn’t pick just one winner from this trio, they were all excellent.

By now I was onto my Tequila Sunrise, while Scot went off-menu for his second drink and ordered a Manhattan. It was good, though he said he would have asked for a different bourbon had he known it was going to be made with Woodford Reserve.

Then it was time to live Large. The fantastic Moonshine Meatloaf ($27) is ground chuck, foie gras, and gin meatloaf, wrapped in black bacon. It’s served with bistered potato and pearl onion hash, brown butter green bean bundles, and caramelized tomato marmalade. Our friend Matt, a cook at First & Hope, had stopped by our table earlier and told us that this was the dish that won Cooper the gig after an exhaustive search. One can imagine the judges’ reactions when she served it. At once downtown and down-home, the Moonshine Meatloaf epitomizes Cooper’s culinary philosophy in a single hearty entree. 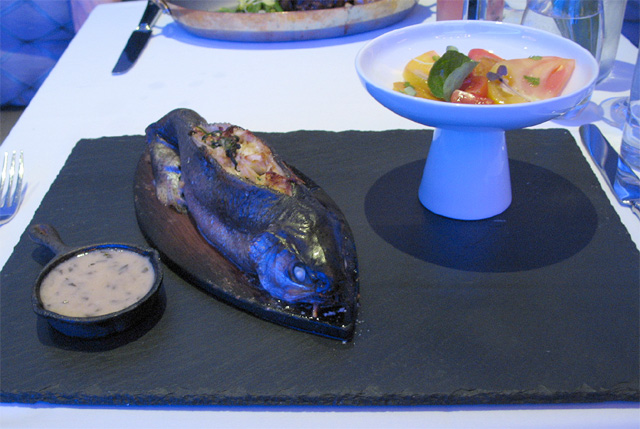 Like the Mac & Cheese Flight, the Pecan-Plank Stuffed Whole Trout ($22) also arrives on a slate, served with heirloom tomato and cornbread panzanella salad. The trout looks eerily alive as it stares ahead, its tail tucked under its body. Even with lump crab and baby spinach spilling out of its back, the trout still looks like it could swim away at any moment. The dish is an impressive feat of culinary engineering: after the skin is pulled away, the trout holds its form, with the crab and spinach where the trout’s spine and ribs used to be. Everything is perfectly cooked; the fish is light, moist and delicious. A few bones are to be expected, though by luck of the draw my side of the trout had some fairly sizable ones, not just the odd pin bone. That said, I wouldn’t hesitate to order the trout again, bones and all. 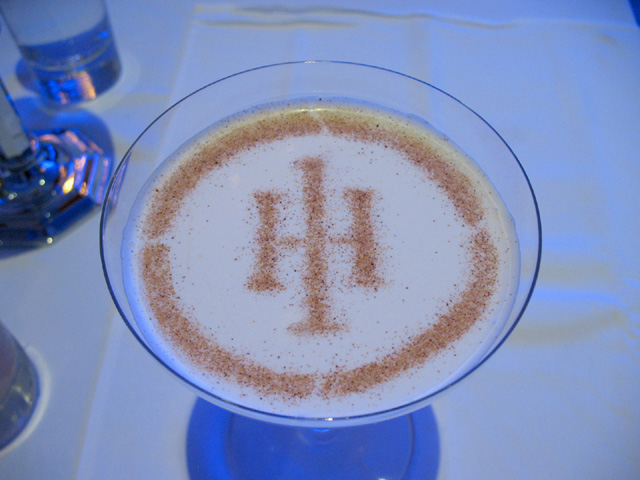 First & Hope GM Steve Springer, who had discreetly checked on guests throughout the evening, told us to sit tight and he’d send out something special. With no room for anything more than a wahfer-thin mint, we couldn’t move at this point anyways and obliged. Our dessert turned out to be First & Hope’s “signature” cocktail, the Brandy Alexander: Rémy Martin VSOP, crème de cacao and hand-whipped cream, topped with the First & Hope logo, stenciled with freshly ground nutmeg. This rich, decadent dessert cocktail was a perfect coda to an outstanding meal.

Service throughout the evening was spot on, professional and attentive without being intrusive. And it can’t be said enough, it’s refreshing to be able to talk to the person across the table without having to shout over the din of music or fellow diners. Before we left, we took a peek at the newly-named Fedora cabaret room. No performances on this night, but we knew we’d be back soon for cocktails and live jazz, yet another facet to the First & Hope experience.