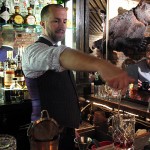 Stories from Behind the Bar: PDT 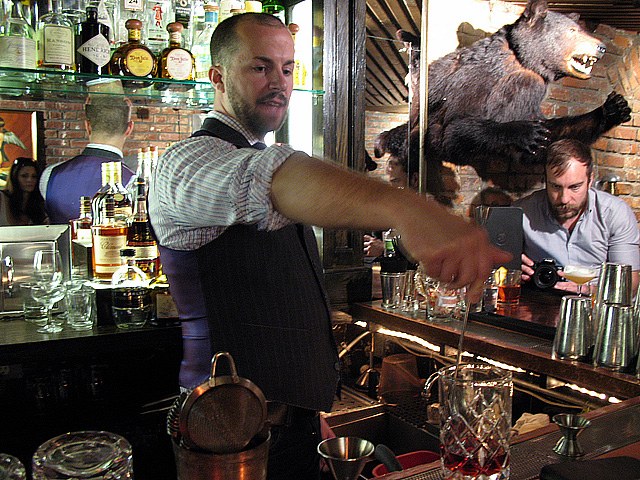 Sixth in a series recapping the 2010 Manhattan Cocktail Classic.

It would be impossible to top Day Three of the Manhattan Cocktail Classic, an incredible Sunday that started with The Magic of Mezcal and ended with The Three Hour Tour. Day Four of MCC would thankfully be relatively low-key and I could put my liver on cruise control. To help alleviate the cumulative effects of the last few days of imbibing, I had a quick, restorative meal at Kambi Ramen before taking a short walk to St. Mark’s Place.

With a limit of just nine attendees, Stories from Behind the Bar: PDT was one of the first seminars to sell out almost immediately after online tickets went on sale. Since its opening in 2007, Please Don’t Tell (PDT) has garnered acclaim for its classically-inspired seasonal cocktails: at the Tales of the Cocktail 2009 Spirited Awards, PDT was named World’s Best Cocktail Bar and Managing Partner Jim Meehan was named American Bartender of the Year.

Along with the praise came some criticism as well, such as an infamous New York Post article that called out PDT for its house rules and neo-speakeasy idiosyncrasies. Besides its world class cocktails, PDT is perhaps best known for its hidden entrance within Crif Dogs, which is easily located thanks to its cheeky “eat me” hot dog sign. PDT regulars know the routine well: step down into Crif Dogs from St. Mark’s, enter the vintage phone booth on the left, and close the door. Pick up the phone and press the buzzer, a steel door opens, and if you have a reservation or if there’s space at the bar, the hostess lets you into PDT. Reservations are taken same-day only, and can be made starting at 3pm. Bar seating is first-come, first-served.

There’s no standing in PDT, so if the bar is full, hopeful patrons have to wait next door for someone to leave. I got a taste of this experience as I pulled up a stool inside Crif Dogs before the start of the seminar. By happy coincidence I was joined by Rivera mixologist Julian Cox and Kristina Howald (La Descarga). We hadn’t planned on meeting up at PDT, but it was great to attend the two-hour session with a couple of L.A. friends. The steel door opened soon enough, and we were invited to seat ourselves at the bar. 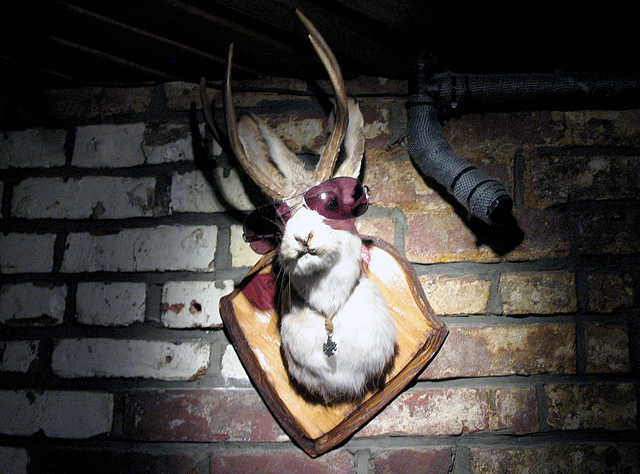 Even though it was my first time at PDT, there was a sense of familiarity to the dimly-lit, rustic interior with a subtly modern sheen: taxidermy on the brick walls; low wooden ceiling; cozy banquettes. Whether it can be found in other Manhattan bars or in New York-influenced progeny like The Varnish, the PDT look is comfortable, simultaneously classic and of-the-moment.

Once everyone was settled in, we were greeted by Meehan and bartender Sean Hoard, who as a member of Team USA (along with Denver’s Mark Stoddard and Todd Thrasher from Washington, D.C.) recently took home first prize in the sixth annual 42BELOW Cocktail World Cup. Meehan and Hoard presented us with daiquiris in chilled coupes, which paired nicely with the welcome tater tots that were served with diced jalapeños and cheese sauce. Unfortunately since I’d already eaten, I didn’t have any room for the Crif Dogs that were included with the MCC ticket. My fellow attendees placed their orders, and after a buzzer rang, their food was passed through a small metal door from the Crif Dogs kitchen and into the bar. Some of the hot dogs offered at PDT are different from the Crif’s menu, and looking back I really should have tried the Chang Dog, created by acclaimed chef David Chang: a deep-fried, bacon-wrapped hot dog topped with Momofuku Ssäm Bar kimchi purée. 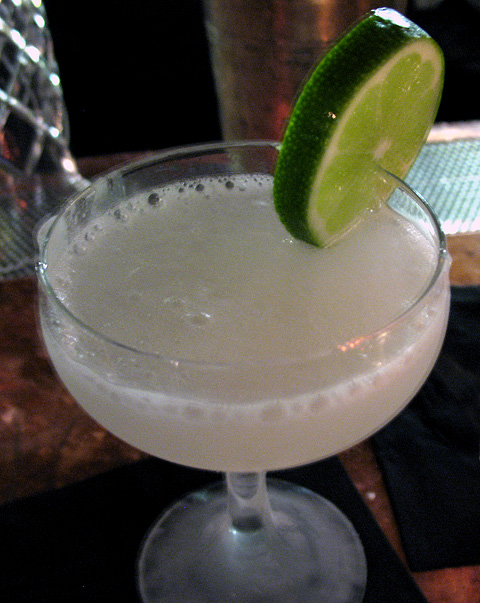 While we sipped and nibbled, Meehan presented the PDT story, beginning in 2007 when he was a bartender at Gramercy Tavern and Pegu Club. He’d been working at both places since 2005, when the modern cocktail renaissance was starting to gain momentum. Crif’s co-owner Chris Antista, one of Meehan’s regulars from the first bar he worked at in New York, brought Meehan on board to consult on a bar he was opening with his Crif Dogs partner, Brian Shebairo.

In addition to hiring staff and helping to design the bar, Meehan created an opening menu of twelve drinks, featuring lesser known classics (e.g. the Royal Bermuda Yacht Club Cocktail) and a few originals. He kept his approach straightforward: “I wanted to open a place I wanted to drink in.” With fifteen bars on St. Mark’s Place it can be “mayhem in the evening,” so Meehan wanted PDT to be “a nice neighborhood bar” that would also become a destination bar.

PDT opened in May 2007, at a time when there wasn’t a deep talent pool of craft cocktail bartenders. Meehan said he was very fortunate to have John Deragon and Don Lee (PDT’s opening Beverage Director) as part of his team. Both men came from IT backgrounds and were instrumental in helping to get PDT up and running. Noting the difficulties in obtaining a liquor license and the hoops that prospective owners have to jump through, Meehan shook his head and said, “My heart goes out to anyone opening a bar in New York today…it’s just not fair.”

The aforementioned New York Post article came out shortly after PDT opened, but Meehan said that “people bought into the program from the beginning.” The PDT crew took the critique in stride, even naming one of the specialty hot dogs The Speakcheesy, a “Crif Dog topped with jalapeño cheese whiz: shhh!” Media coverage beyond the Post broadside would follow, and three years on, table reservations continue to sell out before sundown.

Meehan said that PDT takes the cocktail experience out of the public house and into a “rarefied space,” akin to “a restaurant for cocktails.” With that in mind, if you’re late for your PDT reservation you’ll lose your table, which surprises those who don’t feel the need to be all that punctual for a bar. He compared the assumed rights of a fine dining customer to what PDT has stated explicitly in its rules, which may seem obvious in another context, but stand out at PDT by elevating it from the boisterous environment of the average bar.

There’s a “no standing” rule because PDT is a small bar and if people crowd over each other, it interferes with the guest experience. The PDT rules of etiquette (starting with the “Golden Rule”) are posted in the restroom. One of the most-quoted rules is “No PDA at PDT: hands on table, tongue inside your mouth.” Another warns patrons to leave the women alone, because PDT is not a pick-up joint. Other rules include no laptops, no games (cards), and no yelling or cursing. (At this rule, Meehan broke into an imitation of “The Clapper,” his term for an obnoxious patron who guffaws and constantly slams his hands on the bar.)

There will always be those who think such house rules are pretentious. Personally, I’ll take a quiet drink at PDT any day over a bar packed with drunken rookies leaning on me and yelling for another vodka and Red Bull. I’ve been that guy too, but these days I appreciate it when a bar or restaurant seeks to provide the best possible customer experience, as opposed to quantity over quality. If carefully executed cocktails, polite behavior and table reservations aren’t your thing, there are a dozen bars on St. Mark’s Place ready for your business. 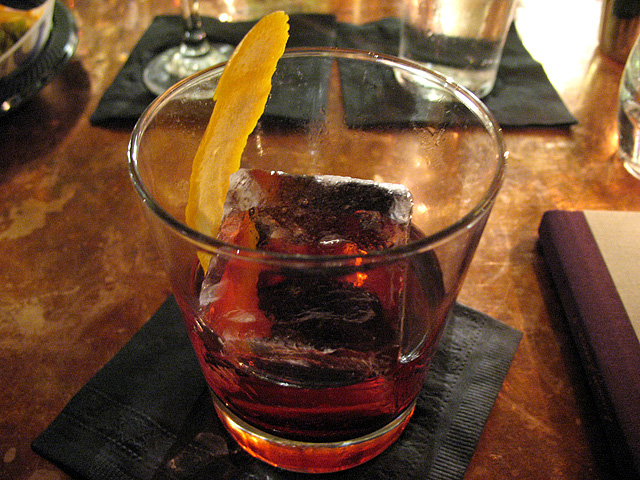 Within its first year, PDT expanded from 12 drinks to an 18-drink menu that now changes seasonally. Whether he’s creating or enjoying a cocktail, Meehan said he looks for balance and “return sips,” and sours are his cocktail family of choice. All cocktails are priced at $14 on the PDT menu, which is written like a wine menu; the drink is created first, then the name and the story follow. Meehan feels that three drinks per guest over the course of a visit is the ideal “little journey,” highlighting different spirits and flavor profiles. Our own MCC journey continued when we were served the East Indian Negroni, a delicious rum-based take on the Italian classic.

Of course, everyone at the seminar wanted to know how PDT’s “secret” entrance came to be. Brian Shebairo had acquired a liquor license for Crif Dogs six years ago, but not much had been done with it when Meehan was brought on board: “There was a bottle of Jäger in the ice box,” and that was about it. The Crif Dogs partners assumed the lease from a failing business next door and essentially cut a hole in the wall to create a two-room venue. So the liquor license is for 113 St. Marks Place, and PDT is the bar for the entire space. And why a phone booth? Meehan demurred, saying only that the design choice was likely the result of some late night brainstorming. 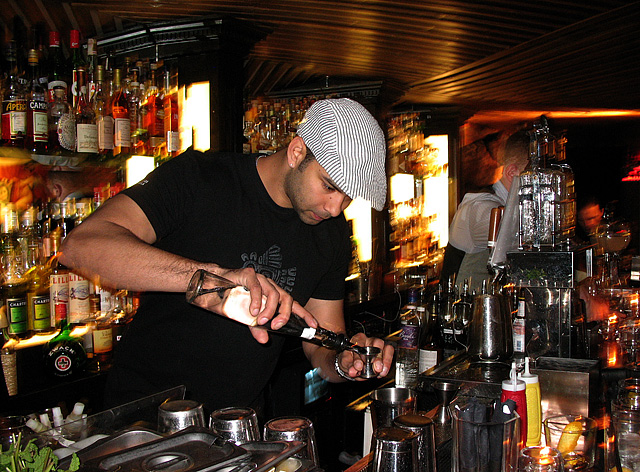 Julian Cox steps behind the bar to make a Flying Dutchman.

Meehan then opened up the session to the group, taking questions and even inviting us to step behind the bar and make a drink from the PDT menu, with recipe portions and assistance from Hoard if needed. Julian took his turn and made a Flying Dutchman: Bols Genever, Clear Creek Plum Brandy, lemon and pineapple juice, crème yvette and maraschino liqueur. Other guests made the Cuzco (BarSol Quebranta Pisco, Aperol, lemon and grapefruit juice, Clear Creek Kirschwasser) and the Mariner (Compass Box Oak Cross, pineapple and lemon juice, smoked cardamom simple syrup). 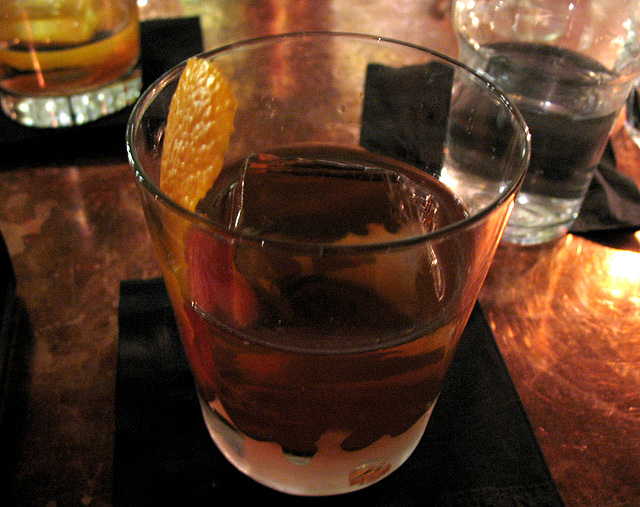 The seminar ended on a high note with a modern classic, the Benton’s Old Fashioned: bacon-infused Four Rose Bourbon, Grade B maple syrup and Angostura bitters. Created by Don Lee, it’s a remarkable creation that balances smoky and sweet notes with a wonderful bacon finish.

Though it took place at a bar known for its exacting craft and attention to detail, the PDT seminar was relaxed, informal and enlightening, as enjoyable a session as I could ask for on my penultimate day in Manhattan. My liver would only earn a brief respite, though; later that night was The Dizzy Fizz Tastemaker’s Punch, and a farewell night on the town still lay ahead on Tuesday.