Maker’s 46: History in the Dipping

By any standard, Bill Samuels Jr. has done a remarkable job of carrying on his parents’ legacy during his 35-year tenure as President of Maker’s Mark. Not long after Samuels assumed the company’s reins in 1975, Maker’s Mark experienced double digit growth for the first time. Under his leadership, the brand expanded beyond its home state of Kentucky and is regarded as the world’s most popular wheated bourbon and an icon in the global spirits industry. Samuels is now making a bid to shape his own legacy with the release of Maker’s 46, the company’s first new bourbon in 52 years.

In 2008, Maker’s Mark named Kevin Smith as its new Master Distiller. In one of his earliest meetings with Smith, Samuels expressed his desire to create a new Maker’s Mark. From the beginning, Samuels and Smith wanted the new expression to keep the original Maker’s Mark flavor profile, but intensified and full-bodied without any bitterness. To achieve the desired results, Smith suggested giving mature Maker’s Mark a different finish. After their experiments reached a seeming dead end, they turned to Brad Boswell (President, Independent Stave Company) to help develop the finishing process.

Boswell invented a groundbreaking technique in which he lightly seared French oak staves on both sides. The staves were seared just enough so that caramel and vanilla flavors were released, while only a small amount of tannin (which adds bitterness) came out of the wood. The Maker’s 46 name comes from the profile number Boswell assigned to the special seared staves. For the final finishing process, ten of these Number 46 staves are attached to the sides of barrels that previously held fully matured Maker’s Mark. The bourbon is then put back in the barrel and aged for several more months, allowing the staves to give the spirit an enhanced complexity and character.

Prior to its release, tastes of the highly anticipated Maker’s 46 were given to a lucky few, from select guests at the Manhattan Cocktail Classic to members of the Seven Grand Whiskey Society. On June 29, the first five bottles of Maker’s 46 to ever come down the line were ceremoniously dipped in the distinctive Maker’s Mark red wax. Doing the honors were Kentucky Governor Steve Beshear and First Lady Jane Beshear, Samuels, Smith and Boswell. Smith pulled the five bottles off the line, numbered them, then locked them away for posterity. 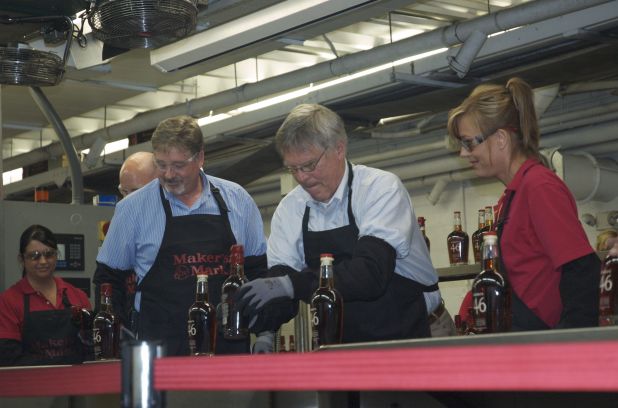 While overall production at the distillery is expected to exceed one million cases for the first time this year, only 25,000 cases of Maker’s 46 will be shipped, which is sure to increase the demand for this first year’s batch. As bourbon fans begin seeking out the new release, Maker’s Mark has provided the following tasting notes to whet their palates:

Maker’s 46 will be sold in 750ml bottles and retail for an estimated $10 more than the standard Maker’s Mark (prices vary by state).

Initial reaction to Maker’s 46 has been positive. John Hansell notes in his Malt Advocate review, “The French Oak staves in ‘46’ add firm, complex, dry spices (lead by warming cinnamon, followed by nutmeg and clove)…which dovetails well with Maker’s trademark layered sweetness.” Drink Spirits gives Maker’s 46 an enthusiastic 4.5 out of 5 stars (Very Highly Recommended): “We actually like Maker’s 46 even better than the original and expect it to be a huge hit in the marketplace.”

Watch an archived stream of the Maker’s 46 “First Dip” at Ustream.

BourbonBlog has more Maker’s 46 coverage, including the first day of bottling, as well as an exclusive tasting and interview with Kevin Smith.