Summer finally decided to show up last Saturday, but the triple digit heat didn’t deter 1,200 thirsty Angelenos from heading downtown to attend the inaugural L.A. Craft Beer Crawl, a collaboration between 213 and the Beer Chicks (Christina Perozzi and Hallie Beaune). The sold out event took place at seven of 213’s bars, where Crawlers could sample dozens of beers from 20 breweries. The selection of beers that Perozzi and Beaune had compiled for the Crawl was impressive, as evidenced by the number of breweries that were awarded medals at this year’s Great American Beer Festival.

My partner in crime for the Crawl was Justin Sloe, DJ extraordinaire and craft beer expert (not necessarily in that order). Media check-in was at Seven Grand, where Sloe and I met up to get our wristbands, map and 6-ounce tasting glasses. The Manila Machine (one of several food vendors selected for the Crawl by LA Weekly’s Jonathan Gold) was parked in front, but we didn’t have time to eat; there was beer waiting for us upstairs! 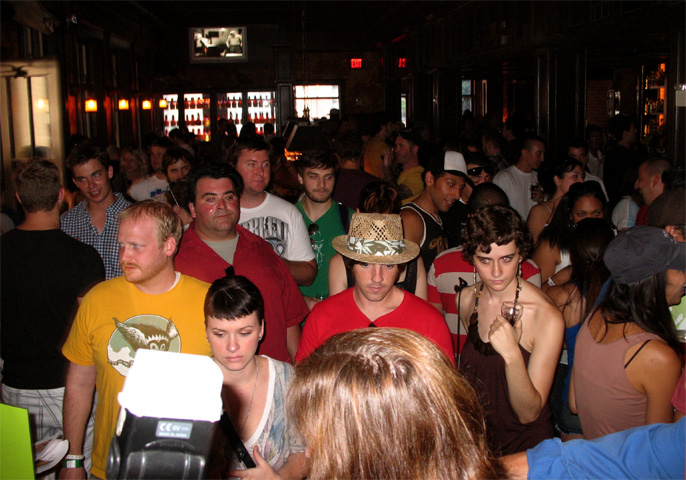 At Seven Grand, Crawlers queued up for Craftsman and other top breweries.

Seven Grand’s main room was packed with Crawlers sipping pours from brewers such as Allagash and Lost Coast, who were set up along the bar. On the far side of the room was Craftsman Brewing, who poured us their Fireworks Saison. Light and fruity with a bit of funk, the saison was an excellent way to kick off the Crawl. Comment from Justin Sloe (JS): “Perfect warm weather beer with a nice kick of Belgian yeast.”

We made our way to the Jackalope Room, where the Beer Chicks were leading a media tasting of several of their top picks: 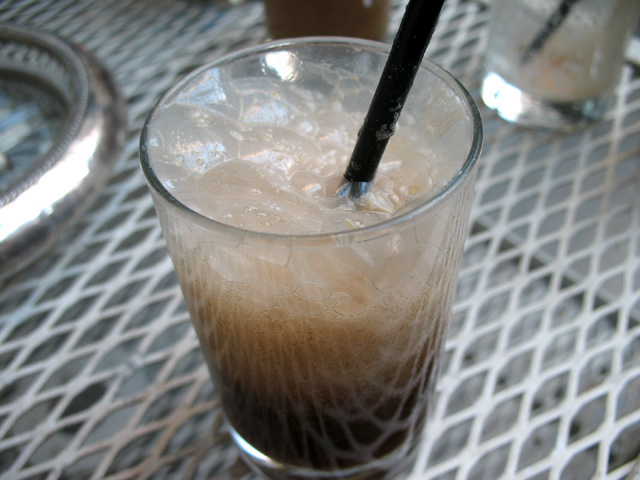 A beer float made with Maui CoCoNut Porter, perfect for Caña's patio.

This being an L.A. bar crawl, we drove to our next stop, Caña Rum Bar. Inside, Crawlers queued up for beer floats made with Maui Brewing Co. CoCoNut Porter, which were served in Caña’s glasses rather than the Beer Crawl tasters. The delicious beer floats, with their great mix of coconut, coffee, chocolate and vanilla flavors, were a perfect fit for the heat wave. JS: “The vanilla ice cream (wish we got the coconut gelato!) went great with the richness of the porter and the coconut shined through.”

Out on the patio, Jolly Pumpkin was out of their Oro de Calabaza, so we went with the Bam Bière, a dry, sour farmhouse ale that Sloe describes as “another funky saison, could drink this all day.” Back at the bar, Caña GM Allan Katz poured us a round of Maui Brewing’s Big Swell IPA, which was hops-forward and malty with a sweet and slightly bitter finish. JS: “Big Swell is a terrific IPA when fresh, and it was. Large hop profile, which I love.”

As we drove down Broadway (where we spotted the LudoTruck parked next to Broadway Bar), we made the executive decision to head straight to Las Perlas. First up for me was Uncommon Brewers Siamese Twin, a Belgian-style Dubbel seasoned with coriander and Thai spices, with notes of lemongrass and lime. Then came Uncommon’s Bacon Brown Ale, which didn’t have the smoke or pepper I was hoping for, but did have some caramel and an odd sourness. JS: “You could taste some savoriness in the finish, but I’d be lying if I said I could taste the swine.” 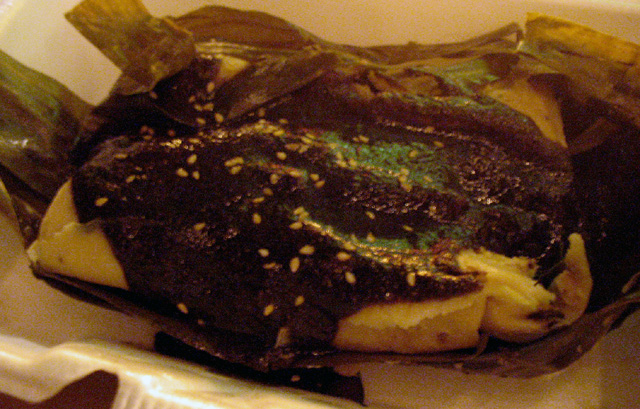 And then, who should we see at the bar but the Mezcal Muse herself, Bricia Lopez. She was at Las Perlas to oversee the Guelaguetza station, which was serving chicken tamales with black mole on the patio. While Sloe and I sipped our beers, Bricia graciously brought over two boxes for us. We gratefully inhaled the delicious meal, a perfectly timed respite that fueled us for the remainder of the Crawl.

But we weren’t quite done with Las Perlas. Eagle Rock Brewery was outside, where co-owner and brewer Jeremy Raub first poured us a round of his crisp and refreshing Manifesto Eagle Rock Wit. The Belgian-style white ale, with its citrus and floral notes, was especially enjoyable on the patio. JS: “One of my faves of the day – he nailed the classic witbier with a lil’ spiciness [you] might find in a saison. Amazing beer.” Next was the Eagle Rock Populist, an herbaceous IPA strong on hops and spice. JS: “Fine representation of this American hop attack classic.” 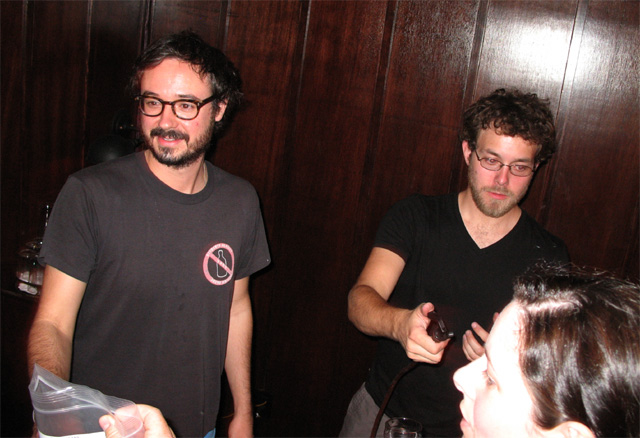 Then it was across the street to the Crawl’s VIP Lounge, located inside the Varnish. As we walked in, The Hot Knives (Alex Brown and Evan George) were pouring their Tonka Bean Porter (actual name here) for eager Crawlers. I would add some tasting notes, but my ADD kicked in when Varnish bartender Devon Tarby called us over and said, “This is for you.” 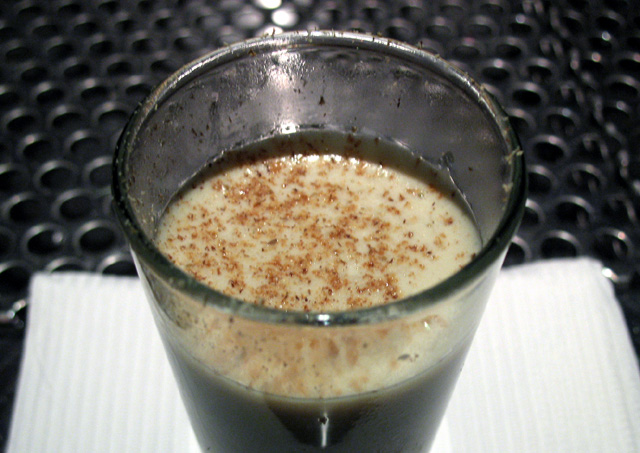 The Double Black Diamond: so nice, we had it twice.

“This” was the Double Black Diamond, made with Deschutes Black Butte Porter, Gosling’s Black Seal Rum, whole egg, and freshly grated nutmeg. The DBD was a ridiculously good beer cocktail, a drink with a richness and depth of flavor that could be enjoyed in cooler weather, yet went down so nice and easy on Saturday night. Sloe was probably underestimating when he said he “could have had a dozen of these.” 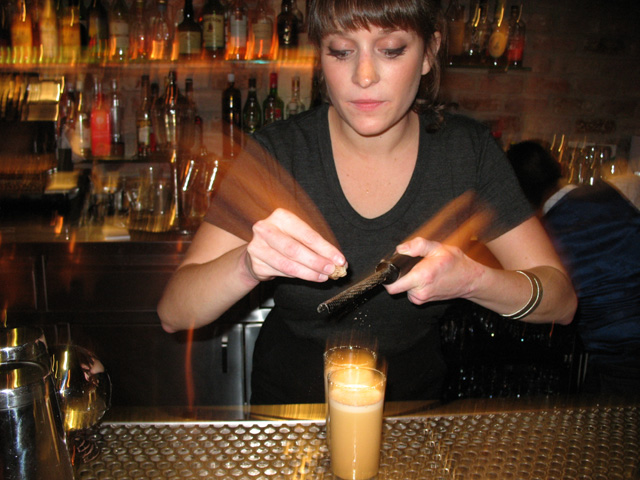 TAPS Brewmaster Victor Novak was also at the Varnish, pouring directly from hand-labeled bottles. We did get a taste for one of our glasses, but the Double Black Diamonds were calling us again, this time mixed by Varnish GM Chris Bostick. We didn’t try the Picon Bière (TAPS Belgian White, Torani Amer, lemon juice, sugar), but it would have to be a beer cocktail of biblical proportions to surpass the DBD. 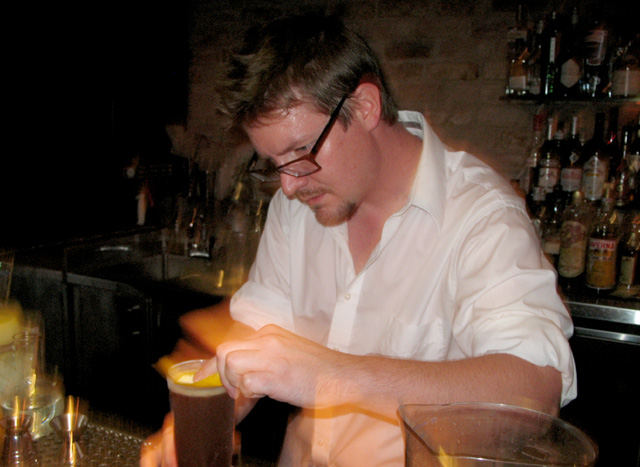 And with that, the Crawl over and it was time for the lights to go down for regular service. Of course, since we were at the Varnish this also meant it was time for a round of cocktails, courtesy of Sloe. Alex Day was now behind the bar, and it was great to introduce him to Sloe, who remarked that he loves to watch someone (of any profession) working at the top of their game. Sloe thought his tequila drink was “delicious,” and even though I missed the cocktail’s name, with its use of mezcal and flamed orange peel I’d guess that it was a Oaxaca Old Fashioned. As for me, Day made a Left Hand (bourbon, sweet vermouth, Campari and mole bitters) that hit all the right flavor notes, something I could still appreciate even after a day of sampling so many great beers.

Cheers to 213 and the Beer Chicks for putting together a successful Beer Crawl. Here’s hoping it’s the first of many!