Since its opening in 1989, Mäni’s Bakery Café became a go-to spot for devotees of its baked goods and healthy breakfast and lunch menus. After 21 years, Mäni’s has moved from its popular Fairfax location and into much swankier digs on Maple Drive in Beverly Hills. Now open for breakfast, lunch and dinner, the new Mäni’s on Maple expands on its previous offerings to include a full restaurant with courtyard and private dining, retail bakery, a full bar and event space. Executive Chef David Wolfe continues the Mäni’s tradition of “Good Food That’s Good For You,” using organic, local ingredients with vegan, vegetarian and gluten-free offerings. The bar matches the food menu by featuring custom cocktails made with organic fruits and herbs, and a selection of California, vegan, and even gluten-free beers. 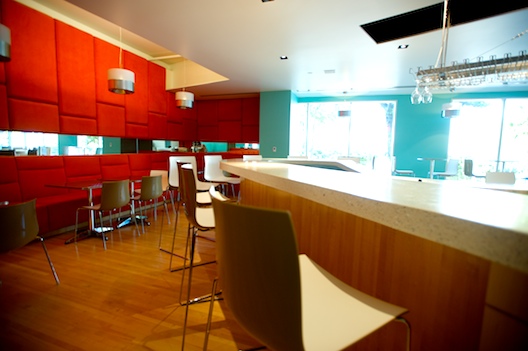 To say “hello” to its new neighbors, Mäni’s on Maple is debuting The Happiest Hour, taking place every Monday through Friday from 3pm to 7pm and 9pm to 11pm. The Happiest Hour features a selection of $6 specials on Mäni’s cocktails, house red & white Borsao and Jean Bousquet wines, and several small plates. 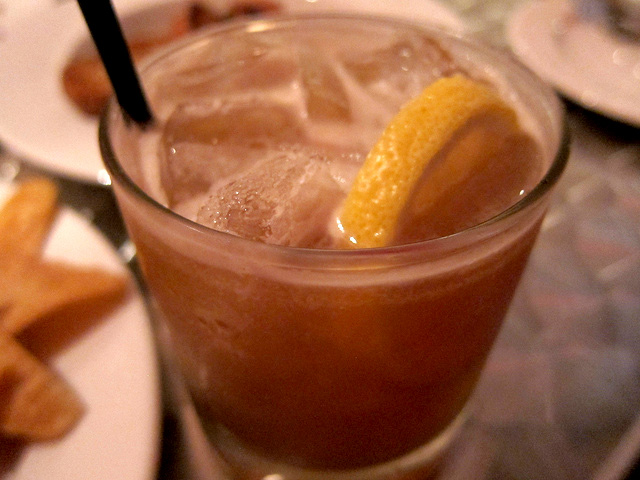 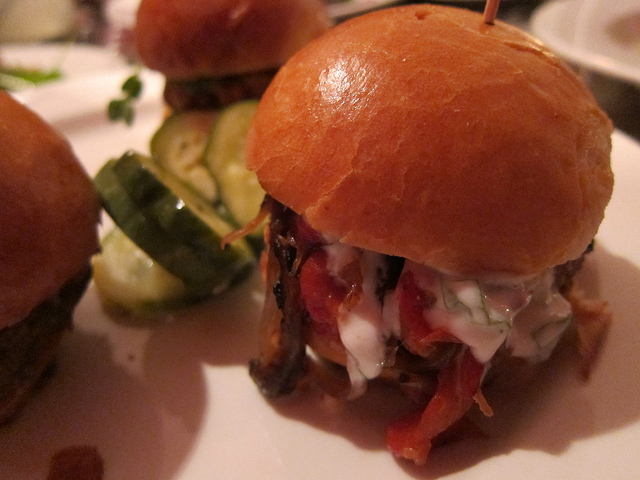 Last week, I joined Esther from e*star LA and Valerie of Red Vines for Breakfast for a hosted sneak preview of The Happiest Hour. The former Paperfish space has been warmed up from its mod, “Space Odyssey” interior with splashes of Mäni’s signature colors. The orange wall remains in the lounge area, where we sampled from the Happiest Hour menu.

The cocktails are a mix of classics and Mäni’s signatures, all made with a healthy, organic spin. From the Happiest Hour menu I had a very good Ward Eight, as well as two non-happy hour cocktails (priced at $10-12): the McCleery Collins (scotch, ginger and citrus) and the Pisco Maleado (BarSol Pisco, lemon, lime, agave nectar, egg white, cucumber and mint). The Pisco Maleado in particular was excellent. While salads may not be the first thing you think of at happy hour, their fresh ingredients paired well with the various cocktails we tried. The Moroccan Lamb was the best of the sliders, while the tofu skewers were surprisingly flavorful.

Mäni’s took a risk when it moved from its home of two decades and into its prestigious new zip code. But longtime patrons will enjoy the expanded offerings, while the new neighbors are sure to welcome a high end happy hour that’s easy on the wallet.