Last week, while I was at a birthday bash for Bill Esparza (Street Gourmet LA), I sent a text to Caroline on Crack, who had made the short walk from Bill’s party at Petrossian West Hollywood to nearby Dominick’s to check out the new fall cocktail menu. 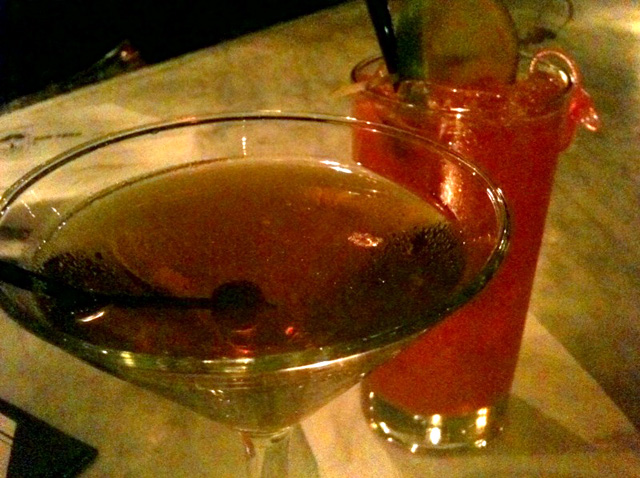 Me: “How’s Dominick’s?”
Caroline: “Lovely. They set me up at the back bar that I have to myself. On 2nd cocktail.”
Then she texted me the above pic.
Me: “On my way!”

Joining me on the impromptu bar crawl (which would include a final stop at Roger Room) were my friends Amy and Lena, plus fellow bloggers Savory Hunter and e*star LA. Walking into the Rat Pack-approved Italian restaurant was like visiting an old friend; the warm and inviting atmosphere is the same as it was when Dominick’s first opened in 1948. We walked past the main bar and sat with Caroline at the smaller back bar, tucked inside the recently updated and expanded patio.

We were introduced to Dominick’s Manager Chris Newcomer, who graciously comped us several of the cocktails from the fall menu, which features a mix of classics and Dominick’s originals.

As she mentioned in her text, Caroline was on to her second round when we arrived. Her first cocktail was a Dom’s Manhattan, made with Old Overholt Rye, Carpano Antica Formula, Angostura Bitters and Amarena cherry. The menu calls for Rittenhouse Rye 100 Proof (a personal fave), but since we’re in the midst of one of its periodic shortages the bartender substituted with the lighter, less spicy Old Overholt.

The second cocktail was a Pink Elephant, made with Plymouth Gin, lime, simple syrup, triple sec and raspberry, served in a highball and garnished with a lime wheel. The little plastic pink elephant hanging off the glass adds a touch of whimsy to the nicely balanced, colorful cocktail.

Next was the consensus favorite of the night, the Scotch Leaf: Famous Grouse Scotch, Maple Bitters, maple, egg white and lemon, garnished with an orange peel. The blended whisky and sweet maple were offset by the lemon and enhanced by the foamy texture of the egg white.

Then came the Southside, made with Damrak Amsterdam Gin, cucumber, basil, simple syrup and lemon, served up and garnished with a cucumber slice and basil leaf. The Southside was another enjoyable sipper, though the ingredients are perhaps more akin to the Eastside, as in this recipe from Imbibe.

Last but not least was the Italian 75, a variation on the French 75 made with Plymouth Gin, Dimmi Liquore di Milano, lemon, simple syrup, topped with prosecco. The Italian 75, served in a flute and garnished with a grapefruit peel, is an herbaceous and floral version of the classic champagne cocktail.

There were two more classics on the menu that we didn’t try: the Mint Julep (Buffalo Trace Bourbon, fresh spearmint, raw sugar) and the Moscow Mule (Russian Standard Vodka, fresh ginger and lime). Based on the drinks we sampled, these last two cocktails will no doubt be of a similar high quality.

Newcomer told us that Dominick’s is (as it’s always been) a neighborhood restaurant and bar that offers a quiet and comfortable alternative to the trendy scenes of other spots. It’s always nice to re-discover a place like Dominick’s, and thanks to a top notch new cocktail menu it won’t be so long between visits.

If you find yourself on the other side of town and craving a Scotch Leaf, not to worry. Dominick’s younger sibling, Little Dom’s in Los Feliz, is featuring the same cocktail menu for the first time. Which makes sense, since the cocktail menu was created by Little Dom’s Manager Nikki Sunseri.