The Macallan in Lalique: Cire Perdue Sold for World Record $460,000 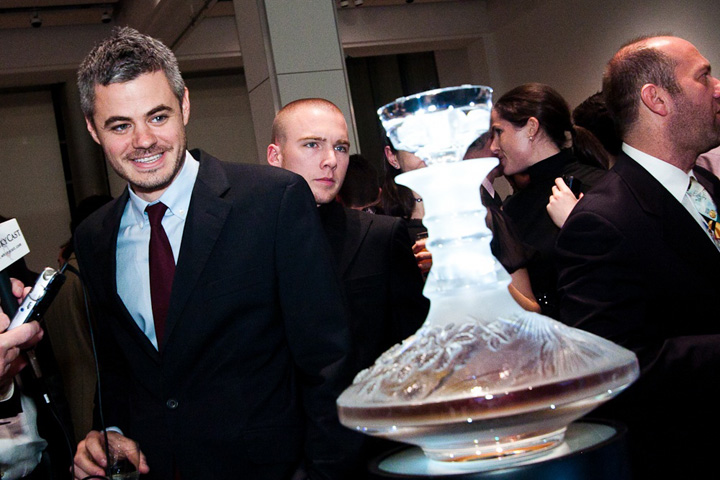 Scott Harrison, Founder and CEO of charity: water, after the record-breaking sale of The Macallan in Lalique decanter.

Last night, The Macallan in Lalique: Cire Perdue sold for $460,000 to an unnamed buyer at Sotheby’s in New York City, setting a world record for a bottle of whisky sold at auction. The Cire Perdue decanter contains 1.5 liters of 64-year-old Macallan, the oldest and rarest Macallan ever bottled by the renowned Speyside distillery. Earlier this year, The Macallan and Lalique partnered to produce the bespoke decanter, made using the ancient cire perdue (“lost wax”) method and created in conjunction with the 150th anniversary of René Lalique’s birth.

All proceeds from the sale of the Cire Perdue decanter benefit charity: water, an organization that provides access to clean, safe drinking water to people in developing nations. charity: water CEO Scott Harrison was elated after the lively auction and record-breaking sale. “We are delighted that the proceeds from this historic auction of The Macallan 64 Years Old in Lalique: Cire Perdue will help fund our efforts,” said Harrison. “Clean water is foundational to communities, and I’m proud to be working with these two esteemed brands to foster thriving and healthy populations worldwide.” The proceeds from last night’s sale will give 23,000 people around the world access to clean, safe drinking water.

Jamie Ritchie, Head of Sotheby's Wine in the US and Asia, presides over the lively auction.

The Cire Perdue decanter has been on a 12-city “tour du monde” since April 2010. At events in each city, 10 cl tastes from very limited reserves of The Macallan 64 Year Old were auctioned, with proceeds benefiting charity: water.

David Cox, director of fine and rare whiskies for The Macallan said: “We are absolutely thrilled with the result of last night’s auction, which has smashed the world record for the most expensive whisky ever sold. It was wonderful to experience the culmination of this incredible project which has made its way around the world to raise $600,000 for charity.”

Since April, The Macallan and Lalique have raised approximately $605,000 to benefit charity: water, a sum that will change the lives of 30,250 people.