A Drinkable Feast at Hemingway’s Lounge 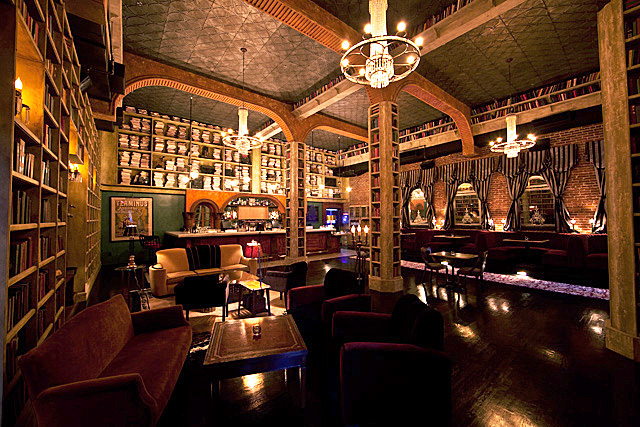 Since its opening in September, Hemingway’s Lounge has been packing them in on DJ-driven nights when the multifaceted venue transforms from low-lit cocktail den to energetic dance party. Owner Johnny Zander (whose velvet rope CV includes Hollywood hot spots Green Door, the Tropicana Bar and Teddy’s) and his partners have taken 2800 square feet of the former Ivar space and created a destination that has something for cocktail enthusiasts and Hollywood scenesters alike. Hemingway’s doesn’t just exploit its namesake’s worldwide fame; the author’s granddaughter Mariel Hemingway has given the family’s stamp of approval, and according to the L.A. Times she is even working with Zander on donating part of the bar’s proceeds to The Giving Planet.

The calm before the storm: Alex Straus (L) behind the stick at Hemingway's.

The key to Hemingway’s bar program is Alex Straus, whose cocktail menu features a couple of Papa’s favorites (Death in the Afternoon, Hemingway’s Daiquiri) as well as drinks named after Hemingway novels, all priced at $16. Last week I joined fellow imbibers Caroline on Crack, e*star LA, and John Colletti (SocialDomain) for a hosted tasting of Hemingway’s new winter cocktails, now available alongside the regular menu. 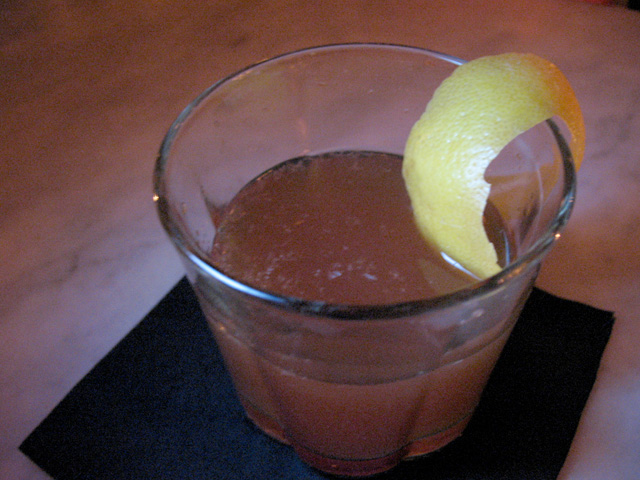 While I waited for the others to arrive, Alex started me with the first of his new cocktails, a Hot Whiskey Cocktail made with Elijah Craig 12 Year Old, Allspice Dram, maple syrup, lemon and freshly grated cinnamon. Although Alex said he was testing out new equipment, the temperature was fine and it made for a nice start to the session, the perfect libation for a brisk L.A. winter night. 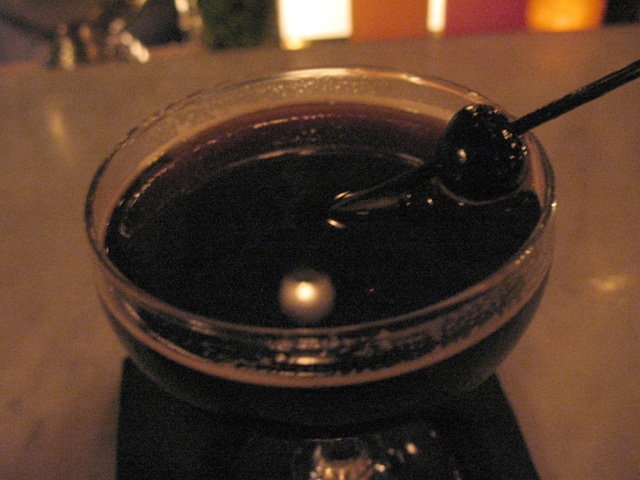 An experiment with Chivas and Old Rasputin.

I had taken a few sips before Alex presented a cocktail he had just come up with, an experiment made with Chivas, Old Rasputin (one of several craft beers available on tap) and bitters. The mix was dominated by the Russian Imperial Stout, its chocolate and espresso notes enhanced by the heat and hints of citrus from the whisky. Alex adjusted the ratios and later made a version that was more Scotch-forward. By this time the others had arrived, and the cocktails started coming at a rapid clip. 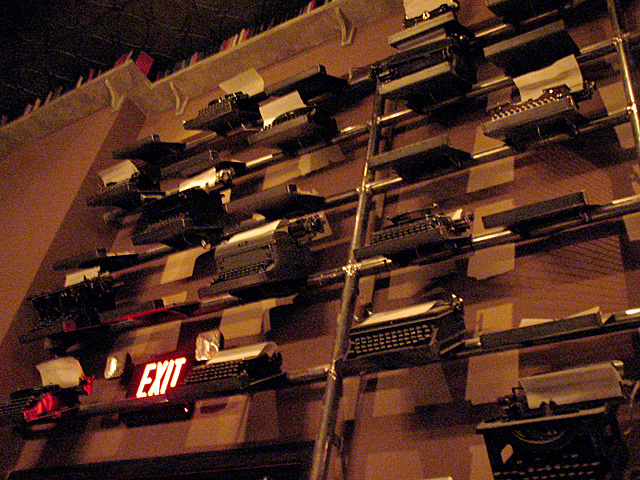 A wall of vintage typewriters, each with a Hemingway quote on a sheet of paper.

As we sipped Hot Whiskey Cocktails, I also drank in Hemingway’s striking interior design. The most noticeable feature of the double height main room are the 10,000+ books that fill numerous shelves and concrete pillars. Unfortunately, none of the books can be read, since they’re glued in place as a safety precaution. (Insert comment about the irony of being in a place called named after Ernest Hemingway where you can’t read any of the books.) Dozens of vintage typewriters, each with a Hemingway quote on a sheet of paper, are mounted above the DJ booth on the wall opposite the bar.

Hemingway’s isn’t a nightclub per se, but on Tuesdays (Industry Night) and weekends it’s slammed. Alex says he thrives when Hemingway’s is busy; not a surprise, since he opened the bar at TAO Beach in Las Vegas after honing his mixology chops with Sasha Petraske at New York’s East Side Company. 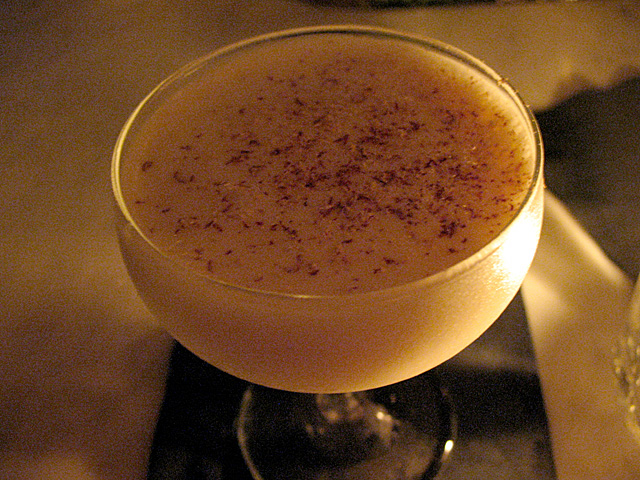 Next up was my favorite of the winter cocktails, the outstanding Hemingway’s Nog: Atlantico Rum, Licor 43, crème fraiche, and Bittermens ‘Elemakule Tiki Cocktail Bitters, topped with freshly grated nutmeg. It’s a rich but lighter take on the traditional holiday favorite that goes down almost too easily. If Alex ever decides to sell it by the pitcher, he’d make a killing. 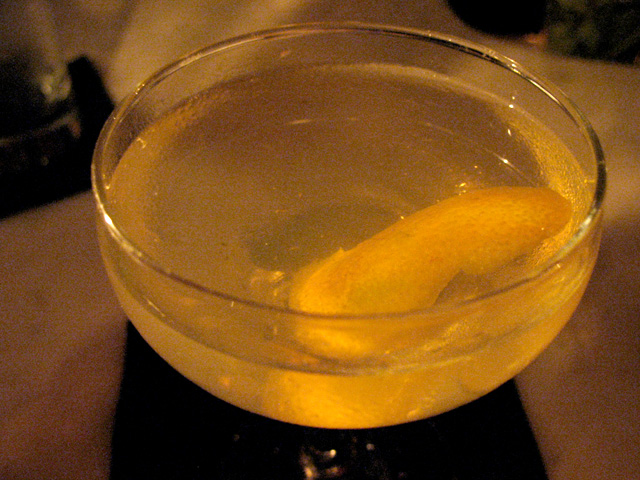 Then came the Chamomile Gin Martini: chamomile tea-infused Junipero Gin, Dolin Blanc, Regan’s Orange Bitters, finished with a flamed orange. Such a bright and floral martini variation may not immediately scream “winter,” but when a cocktail is this enjoyable, simply picture yourself in one of Hemingway’s Key West or Havana watering holes and it makes perfect sense. 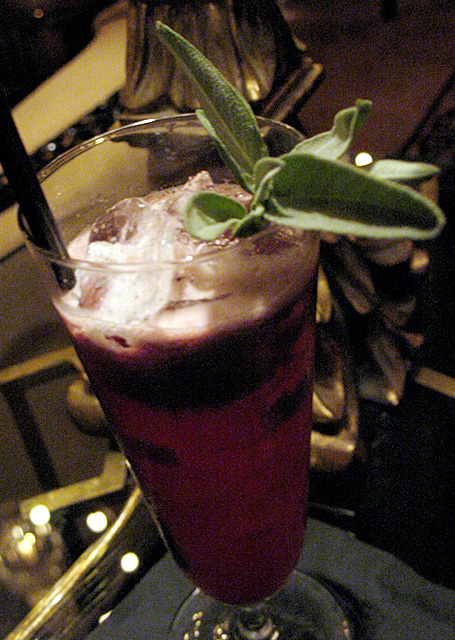 “All things truly wicked start from an innocence.” ~ A Moveable Feast (1964)

From Hemingway’s regular menu, Alex made us A Moveable Feast, the bar’s signature cocktail: rye whiskey, sage, berry, honey, lemon and The Bon Vivants Tomahawk Bitters, served over ice in a highball and garnished with sage. As Alex notes in his Food GPS Q&A, Hemingway’s is the only venue south of San Francisco that has the Tomahawk Bitters, and it’s put to good use providing depth to the refreshing, aromatic cocktail.

Alhough there isn’t a spirits menu, Alex said that Hemingway’s continues to build a strong selection, and to emphasize this point he poured a few drams of Hakushu 12 Year Old Single Malt Whisky. The award-winning Hakushu Distillery takes its name from the village where Suntory founder Shinjiro Torii built a distillery in 1973, fifty years after opening Japan’s first whisky distillery in Yamazaki. I’m familiar with expressions from the Yamazaki range (particularly the acclaimed 18-Year, which Hemingway’s also carries), but this was my first encounter with a Hakushu release. The distillery’s forest location at the foot of Japan’s Southern Alps is evoked by the 12-Year’s bright, crisp notes of fruit and dry, slightly smoky finish.

Alex improvised another cocktail while we sipped the Hakushu 12, this time a tall drink with Coruba Dark Rum, Smith & Cross, Appleton Estate Reserve, St. Vincent Syrups Orgeat, and pineapple juice. Here’s hoping this trio of Jamaican rums makes an appearance on the spring menu, or perhaps when the front patio opens up for afternoon service, if current plans move forward.

As we neared the end of the tasting, a customer ordered a Manhattan, which Alex made with WhistlePig Straight Rye Whiskey. I first had a WhistlePig Manhattan at Seven Grand a few months ago during a launch event, and thought it was one of the best I’d ever had. The others hadn’t tried it before, so Alex graciously made us a couple of Manhattans. Once again the WhistlePig proved to be a superb version of my favorite cocktail, and the others agreed, if the appreciative murmurs and empty coupes were any sign.

If you want to sink into one of Hemingway’s vintage chairs and enjoy a quiet cocktail, Alex suggests stopping by early on Wednesday or Thursday nights, or very early on the other days. Or, if you’re looking for some energy and want to get your groove on when the bar is packed five deep, you can take a chance at the door or make a reservation after 9pm.

For reservations and event inquiries: ernest@hemingwayslounge.com.