Look at the numbers and the message is clear: in the U.S. and around the world, vodka is tops. Nightclub & Bar magazine declared in a recent article that vodka continues its reign as America’s “king” of spirits, having supplanted bourbon as the best-selling hard liquor in the U.S. decades ago. More recently, vodka eclipsed blended Scotch as the UK’s preferred spirit. And yet, vodka remains something of a pariah in the modern cocktail culture, with some craft cocktail bars going so far as to refuse to stock vodka at all.

Enter Simon Ford, Director of Brand Education and Trade Outreach for Pernod Ricard USA, who has been tasked with bringing vodka back from exile. To help accomplish this, he and Chris Patino (Manager of Brand Specialists and Trade Education, Pernod Ricard USA) created the Sensory Analysis Workshop, an eight-hour educational and dining experience sponsored by Absolut, with the purpose of re-introducing vodka to the bartender community. 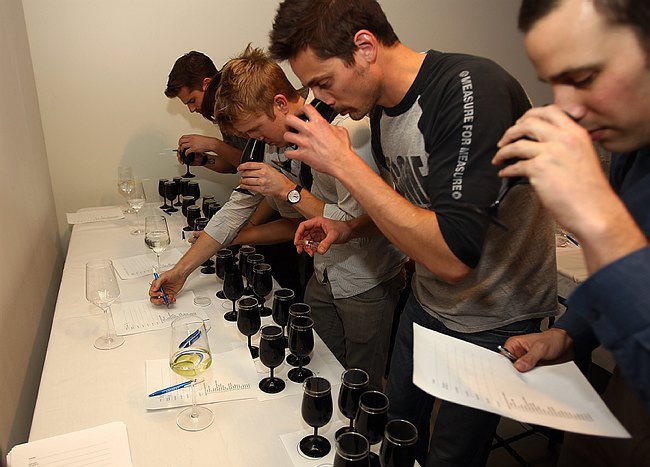 I recently attended the Los Angeles edition of the Sensory Analysis Workshop, which had previously taken place in New York, D.C., Chicago and San Francisco. Among those gathered at a loft space in the American Cement Building were cocktail historian David Wondrich (Punch, Imbibe!), Tony Abou-Ganim (The Modern Mixologist), and dozens of L.A.’s top bartenders. As a warm-up to the workshop, small groups were led into the next room, where Patino timed us on a two-minute blind nosing of six spirits, which we had to identify from a list. 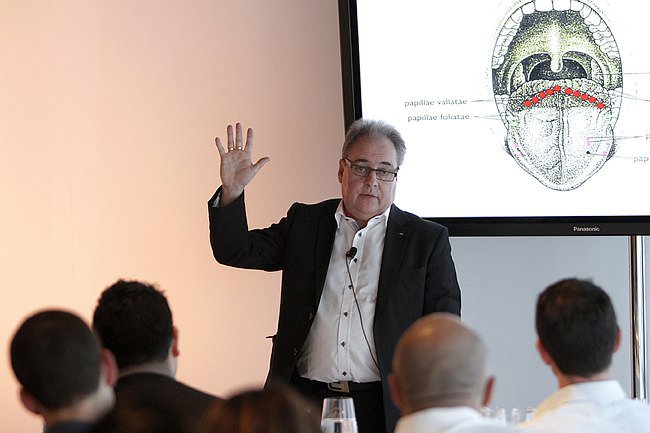 Per Hermansson – Sensory Analysis
In his opening remarks, Ford noted that vodka’s position is similar to that of gin back in 2001, before gin returned to prominence in the current cocktail renaissance. His hope for the workshop was not only to give attendees a better understanding and appreciation of the vodka category, but also to offer inspiration with a presentation and incredible multi-course dinner by Chicago’s Grant Achatz. 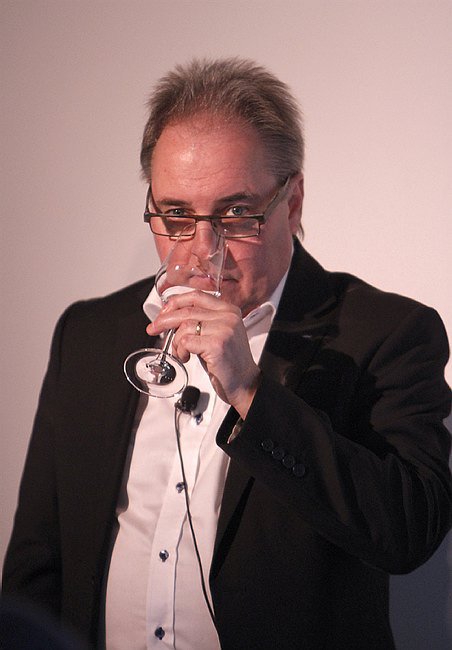 Ford then introduced Per Hermansson, Director of Sensory Analysis for The Absolut Company, who would conduct the vodka education and tasting. A Sensory Analyst for over 30 years, Hermansson joined Absolut in 1996 to head a state-of-the-art facility in Stockholm. At this sensory laboratory, external stimuli are reduced or eliminated, in order to optimize the tasting environment: nearly everything is white, there’s no artwork on the walls, and the tasting glasses are opaque, like the ones used in our initial six-spirit nosing. Our workshop room approximated the Stockholm lab with blank walls, concrete floors, and white curtains and tablecloths.

Hermansson began by dispelling the common misconception that all vodkas are odorless and tasteless. In fact, while the U.S. government defines vodka as “a neutral spirit…without distinctive character, aroma, taste or color,” in Europe the raw materials are “selectively reduced.” In other words, you can taste what European vodkas are made from. Hermansson’s goal was to help us discern the differences between vodka brands; after all, he said, “it’s more interesting to consume something that you know more about.”

Before we tasted the vodkas, we got some background on our two chemical senses, taste and smell. Most people are familiar with the basic tastes: sweet, salt, sour, bitter, and umami. But not everyone is aware of how important smell is to taste. To demonstrate, we did an experiment much like one at the Gin Symposium, in which we wore a nose pincher and tasted a bit of powder. Everyone assumed it was sugar until we took off the pincher, and it turned out the powder was cinnamon.

Interestingly, one nostril is always more active then the other. Over a period of several hours, the active nostril changes. To illustrate this, we sniffed a vial of scented air with one nostril, then the other. Like some attendees, my right nostril was better at detecting the aroma; others said their left nostril was the active one. If we had repeated the experiment later, our answers would have been different. 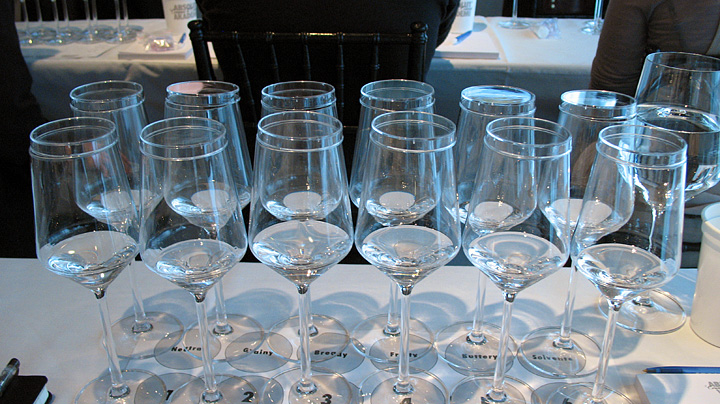 Then came the heart of the workshop, learning vodka fundamentals and tasting various brands.

Why do vodkas taste different?

*Many Russian vodkas are “rounded,” meaning sugar has been added after distillation to make the vodka smoother, especially for drinking neat (as it’s typically consumed in Russia).

*When nosing a spirit or wine, only take a brief sniff, otherwise your sense of smell adapts to the aroma and you won’t be able to detect its subtleties. 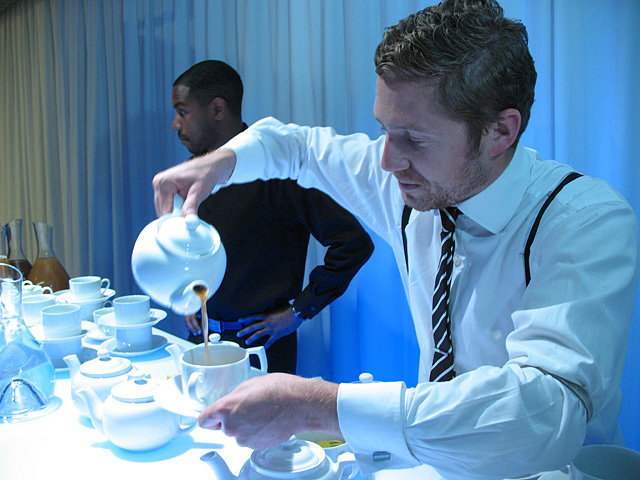 Halfway through the vodka tasting, we took a break with Absolut-fueled hot and cold teas (the Absolut Mandarin provided a warm, bracing spot) as well as an assortment of cucumber sandwiches, cake and pastries. Then it was back to tasting the remaining six vodkas, which included Stolichnaya (fruity, smooth) and Absolut 100 (grainy, creamy, tastes like burning). Like the Karlsson’s, the corn-based Tito’s (bready, sweet) stood out for its easily identified raw material.

Keeping in mind which company was sponsoring the seminar, Hermansson’s presentation supported his thesis that a grain-based vodka like Absolut, with its smoothness and purity, is ideally suited for mixing in cocktails. Unlike rounded vodkas, Absolut is completely dry and its taste is thus unaffected by the addition of sugar. He added that every bottle of Absolut tastes the same because there is only one distillery and one water source, as opposed to vodka brands produced in multiple distilleries or that use different water sources. Hermansson was very effective in demonstrating that vodkas can indeed be differentiated, the big takeaway from an informative and educational session that was one of the best of its kind that I’ve attended. 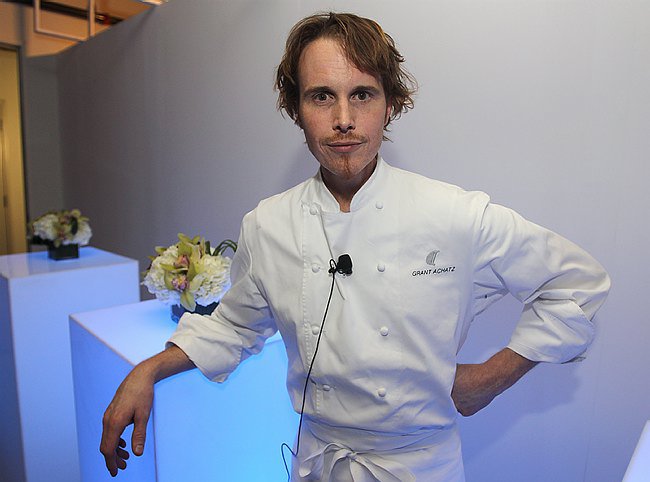 Grant Achatz – Reinventing Food Texture and Flavor
After the Sensory Analysis, Ford introduced Grant Achatz, the acclaimed chef of Alinea, which was awarded 3 Michelin stars just a few days after this event. In his introduction, Ford noted that cocktail culture “had to look to the past” to get to its current renaissance. Now is the time for the industry to look to the future, and he hoped that Achatz would provide the same inspiration to everyone in the room that Ford had found since embarking on the workshop project.

Following are highlights from Achatz’s presentation on his cooking methodology. The session was a condensed version of his recent Harvard lecture, Reinventing Food Texture and Flavor.

Memories enhance flavor: One of Achatz’s memories of growing up in Michigan is the smell of burning oak leaves, which reminds him of autumn. Alinea serves its pheasant, shallot and cider dish accompanied by smoldering oak leaves, which are torched just prior to being served in order to convey that same autumnal smell from Achatz’s childhood.

Achatz asked a rhetorical question: “Does a tomato taste more like a tomato in the summer?” If the answer is yes, then how would an evocative summer aroma affect the flavor of a tomato dish? Achatz then described a process that begins with vaporizing freshly-cut lawn grass, then capturing the grass-scented air in a plastic bag. The bag is pierced with needles and put in a pillowcase. The pillow is placed on the dining table, and an heirloom tomato salad is served atop the pillow. The weight of the dish slowly pushes the grassy air out of the pillow, permeating the table with the seasonal smell of a newly-mowed lawn.

Flavor Bouncing: Achatz described one of his techniques in the creative process, an exercise that begins with a main ingredient (in this case, white beans). From the main ingredient, Achatz connects others, with the restriction that every ingredient has to go with every other one. The result, something he called a “simple” white bean dish with supporting ingredients, can be glimpsed at the end of this video. 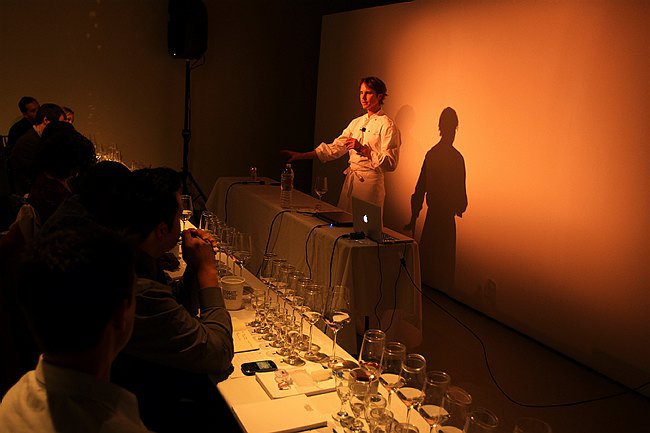 In another segment, Achatz discussed manipulating ingredients, utilizing temperature contrast and flavor association, among other techniques.

Hot Potato / Cold Potato: Cold potato soup is served in a custom-made bowl of paraffin wax. The bowl is pierced by a pin, which skewers a black truffle-topped hot potato ball, a chunk of Parmigiano-Reggiano, and a piece of chive. When the dish is served, the guest is supposed to pull the pin so the ingredients drop into the bowl, then slurp all the contents. In this way, the guest experiences a dish that is simultaneously hot and cold.

Raspberry Transparency: Achatz talked about an organic grower who drives for hours to deliver her raspberries to Alinea, usually arriving in the middle of service when the restaurant is at its busiest. It was during one of these raspberry deliveries that a server dropped an entire tray of glasses (an anomaly, Achatz assured us). The scent of ripe raspberries and the sound of shattered glass inspired Achatz to create a dessert with raspberry “glass,” candied rose petals and yogurt powder.

Hay Brulee: A large part of the Alinea repertoire involves the use of unconventional ingredients, such as pine needles and tobacco. Another one is hay, which is apparently a hot gourmet ingredient in top kitchens across North America and Europe. Achatz said that toasted hay smells like hazelnut. By using “flavor association,” toasted hay replaces hazelnut in a dish, infusing cream to make Alinea’s unique version of crème brûlée.

Achatz then introduced Craig Schoettler, the chef de tournant who creates Alinea’s famed edible cocktails. Schoettler, who will helm the upcoming Aviary (the “bartender-less bar” adjacent to Achatz’s Next restaurant), demonstrated how to make a powdered Gin and Tonic with tapioca maltodextrin. We were each given packets of the G&T powder and told to empty it into our mouths. The result definitely tasted like the essence of a gin and tonic, but I just couldn’t get past the delivery method. Sipping a tall G&T reminds me of balmy summer evenings outdoors, something that doesn’t come across from downing a packet of powder. That said, the powder wasn’t an Aviary cocktail in its final form, but intended to illustrate a technique.

The Vodka Speakeasy
With the workshop concluded, Ford invited us to join him down the hall in an elegantly-appointed room that he called the Vodka Speakeasy, featuring a bar, subdued red lighting and an impressive view of MacArthur Park. Drinks were expertly crafted by David Wondrich, Chris Patino, and Joe Stokoe (All Star Lanes). 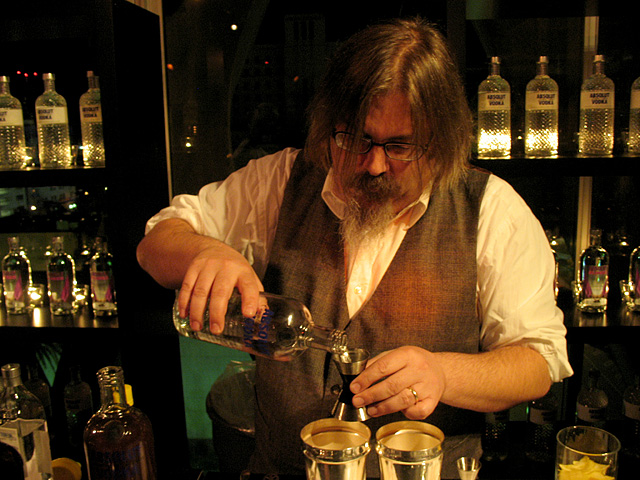 David Wondrich behind the stick at the Vodka Speakeasy.

From the selection of vodka cocktails I had the Happy Ending, made with Absolut Mandarin, Carpano Antica, rich simple syrup, Angostura bitters and a lemon twist. Though it was on the sweet side, it made for an enjoyable sipper as I engaged in various conversations about the workshop. 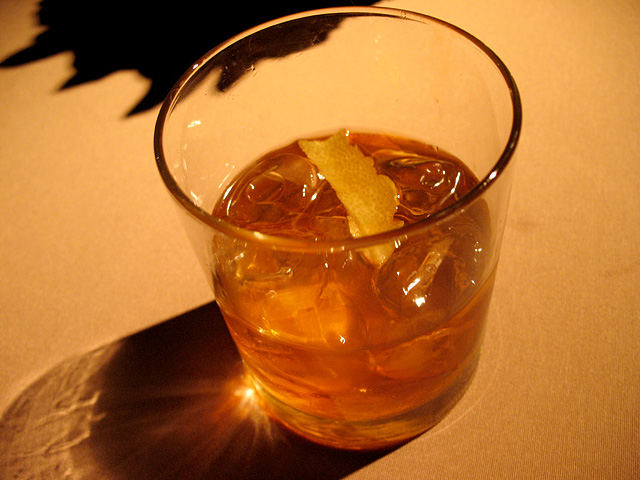 Next was a vodka-based Old Fashioned variation from David Wondrich, The Delancey: Absolut, demerara syrup, Angostura and a lemon twist. Wondrich later said that this cocktail was his cheeky answer to a drink request, but when he made it again at home, he found it was actually quite enjoyable. Based on the outraged Twitter cries of blasphemy when I tweeted about The Delancey, it would seem that Ford has his work cut out for him. But as I said in my replies, this day was all about playing with ingredients and shaking up the status quo. The Delancey will never replace the original, and it’s not supposed to.

Wondrich then took us through a crash course on a history of vodka and its place in cocktail culture, beginning with the Russian Cocktail (also on the Vodka Speakeasy menu), which dates to 1911. Wondrich’s version featured Absolut, Cherry Heering and Kirschwasser, the latter two ingredients substituting for a now-extinct Russian cherry cordial.

Shortly after the history lesson, the vodka cocktail hour ended. Then it was off to another room for an extraordinary dining and cocktail experience, prepared by Grant Achatz and the Alinea team.