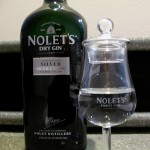 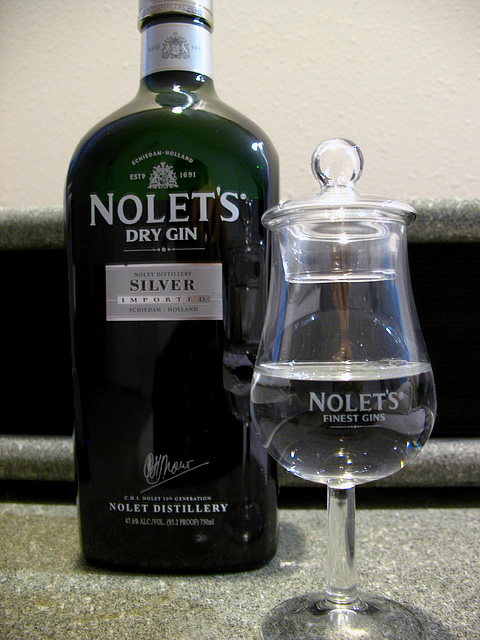 In the June 2010 issue of The Spirit Journal, F. Paul Pacult named Nolet’s Silver Dry Gin the Best Gin in the World, calling it “an instant classic” that “blew me away from the first sip,” and one of the rare gins that is “great on its own.” Of the Nolet’s Reserve, the Silver’s “even more incredible sister gin,” Pacult said it’s “one of the finest spirits I’ve ever tasted.” Quite an accolade, considering that by his own estimation Pacult has tasted over 20,000 spirits. Both expressions received Five Star / Highest Recommendation ratings from Pacult.

Though the Nolet family is best known for Ketel One Vodka (introduced by Carolus Nolet Sr. in 1983), their distilling tradition goes back over 300 years. The Nolets were previously famous for their gin, including the production of Ketel 1 Jenever for the Dutch market. The Nolet’s Silver and Reserve gins are distilled in copper pot stills and bottled at the Nolet Distillery in Schiedam, Holland. Founded in 1691, the distillery survived the French Revolution and two World Wars, and has been exporting spirits to the United States since the late 19th century.

Nolet’s Silver Dry Gin is a collaboration between the Nolet family’s 10th and 11th generations: Carl Nolet Sr. with his sons, Carl Jr. and Bob. Three distinctive botanicals – Turkish rose, white peach and raspberry – separate the Nolet’s Silver from the standard London Dry. Even with the recipe finalized, Nolet Sr.’s attention to detail meant the launch was delayed until he was satisfied with the bottle design. Nolet is marketing its Silver as a “modern take” on gin, ideal for the drinks of today’s craft cocktail bar. Marcos Tello says “the cocktailing possibilities are endless” for the Silver. Gin aficionados may wonder about dialing back the juniper in the Silver’s profile, a point raised in several conversations I’ve had since its release. At the latest meeting of the Sporting Life (hosted by Villains Tavern and sponsored by Nolet), opinions varied from enthusiastic raves to questions about the Silver’s utility as a cocktail spirit, given its upfront floral profile.

The Reserve is billed as “the world’s first limited edition sipping gin,” the culmination of four decades spent by Nolet Sr. to perfect the recipe. The Reserve retails for a whopping $699 for a 750ml bottle, a price that’s only slightly less jaw-dropping when you realize that one of the defining botanicals is saffron, the world’s most expensive spice. Also noteworthy is the use of verbena, revered since ancient times for its medicinal properties. After taking 40 years to create the Reserve, Nolet Sr. is likewise measured in its release, allocating it in very limited annual quantities in select markets.

I first encountered the Nolet’s Silver last October in Las Vegas, at a welcome dinner for the Harlem Shot Showcase. Though the Vegas event was focused on the Harlem liqueur, there was much discussion about the gin, which had launched in the U.S. a month earlier. In the fall, Nolet hosted tasting events with multi-course dinners, Nolet’s Silver cocktails and drams of the Reserve. 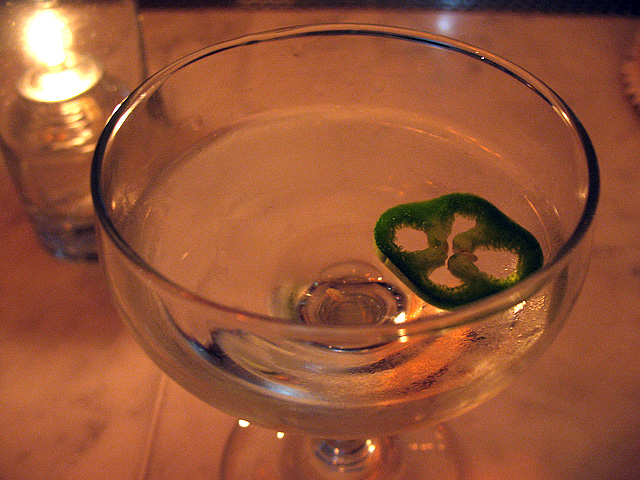 In Los Angeles, Nolet dinners took place at First & Hope and Alcove. At the latter dinner, Bar Manager Juan Sevilla created four specialty cocktails that took advantage of the Silver’s floral, fruit-forward profile. For the passed apps at the start of the event, Sevilla created a Martini variation called the Silver Pistol: Nolet’s Silver, Martini Bianco and “a bit of spice.” The Silver Pistol was crisp and bright, with a nice kick that was offset by the Silver’s sweet and flowery notes. Later on, guests were served a salmon entree paired with the Chin Up: Nolet’s Silver, cucumber, dry vermouth and Cynar. Sevilla explained that the Cynar went with the salmon, while the muddled cucumber matched the dill sauce. The sweet and floral Nolet was nicely anchored by the amaro, with the gin’s inherent dryness enhanced by the vermouth.

Nolet's Reserve and petits fours, a match four decades in the making.

To cap off the dinner, a dram of the Nolet’s Reserve was accompanied by an assortment of petits fours. The saffron and verbena are upfront on the Reserve’s sweet and floral nose, while a creamy mouthfeel on the palate continues with spicy chocolate and citrus notes. The finish is long and velvety smooth, with a lingering heat from its 104.6 proof (52.3% ABV) bottling. With a bit of water, an entire bouquet of floral notes opens up while the heat is mellowed. The Reserve is a remarkable spirit, the realization of Nolet’s goal of creating a true sipping gin. With that price point, collectors that acquire a bottle may want to heed Nolet Sr.’s contention that the Reserve is “best enjoyed in quiet solitude.”

Our Nolet swag bags included a review bottle of the Silver and a nifty set of tasting glasses. (Alas, the Reserve wasn’t included.) The bottle references history throughout its design, from a shape that alludes to past bottles, to the Nolet family tree etched on its sides. The thick, heavy cap carries the Nolet family crest.

Nolet’s Silver Gin: Aviation
In his list of the 25 Most Influential Cocktails of the Past Century (Imbibe magazine May/June 2010), writer Paul Clarke called the Aviation a “bibulous high-sign to fellow travelers of the craft cocktail world.” Historian David Wondrich described the Aviation as “one of the last truly great cocktails invented before Prohibition,” noting in his book Imbibe! that the first published recipe for the Aviation was in Recipes for Mixed Drinks (1916), by New York bartender Hugo Ensslin.

The Savoy Cocktail Book famously omitted crème de violette from its Aviation recipe. The purple, floral liqueur that gives the Aviation its signature sky blue tint (and thus the inspiration for its name) was unavailable in the U.S. for decades. For years, modern Aviations excluded this key ingredient, until the classic version could at last take flight with the 2007 release of Rothman & Winter’s crème de violette.

Nolet’s modern approach to the Silver Gin makes it a good fit for the Aviation recipe featured in Speakeasy: The Employees Only Guide to Classic Cocktails Reimagined. Throughout the book’s 90 recipes, authors (and Employees Only owners) Jason Kosmas and Dushan Zaric showcase their Manhattan bar’s interpretations of classic cocktails, re-imagined with modern techniques.

If you’re keeping track, Kosmas and Zaric’s take on the Aviation harkens back to the Savoy version by dropping the crème de violette. Swapping the Plymouth called for in Speakeasy with the Nolet’s Silver Gin brings back the floral element. The dominant sour from the lemon juice is offset by the simple, the maraschino liqueur and the Nolet’s own sweetness and fruit notes.