Les Deux Estate, a Hollywood Sequel You Need to See

Like pretty much everyone else who heard that the douche-tastic Hollywood nightclub Les Deux (which closed last July) was re-opening as a gastropub, I was skeptical. Then came word that a trio of talented bartenders was running the bar program: Bar Manager Giovanni Martinez, Joel Black and Jason Robey. Craft cocktails and affordably-priced comfort food in the heart of Hollywood? I set aside my misgivings and added Les Deux Estate to the “to-try list” when it soft-opened in November.

Instead of a clean break with the location’s velvet rope past, the owners kept the Les Deux name and added the grandiose “Estate,” a moniker that seems at odds with the low key, casual atmosphere initiated by the venue’s reboot. Martinez has joked about how he had to chase down friends who ran away when he mentioned his new gig is at the former Les Deux. 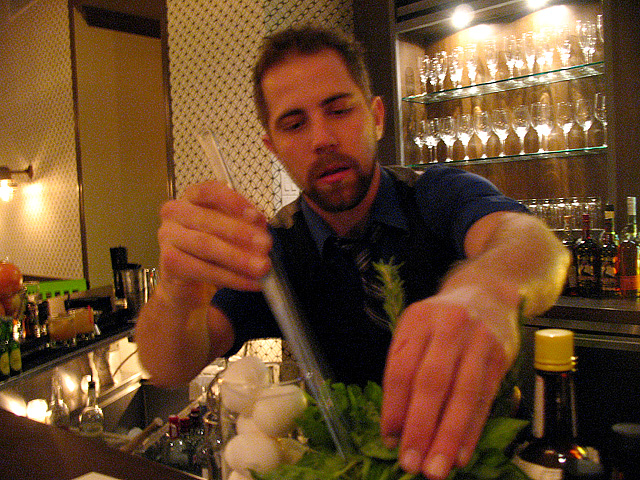 Joel Black harvests some basil for a cocktail.

With Les Deux Estate nearing the end of its soft-open phase, the timing was right to stop by and see if the revamp is more than skin deep. I was joined last week by the awesome cocktailing trio of Caroline (Caroline on Crack), Maya (ShopEatSleep) and Lindsey (LAist). Robey wasn’t there that night, but his influence was felt: the bar was stocked with ingredients from the rooftop garden that Robey had conceived.

Since I avoided the Estate’s previous incarnations, I can’t say how its current interior design compares. It’s fairly bright for a gastropub: besides the interior lights, windows offer plenty of people watching as well as ambient street lighting. Thanks to its mostly subdued palette, the double height dining room feels warm and inviting. I say “mostly subdued” because, this being Hollywood and all, DayGlo green chairs are used throughout the space. 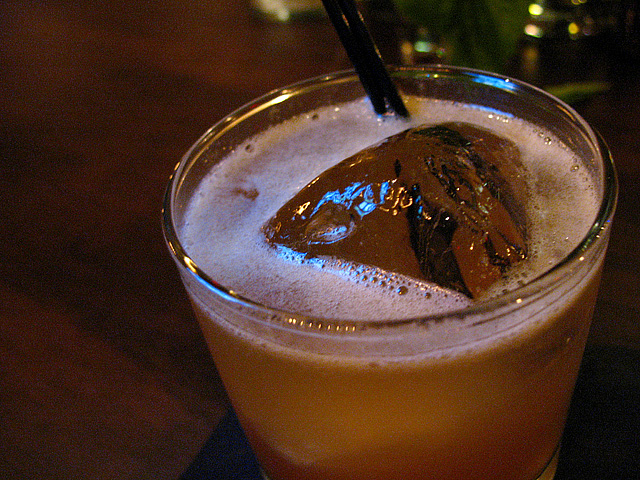 I started with the Where There’s Smoke ($14): Laphroaig, rye whiskey, lemon juice and Three Chili Syrup. There’s plenty of Islay smoke, spicy rye and a nice kick from the infused syrup; a cocktail right up my alley. 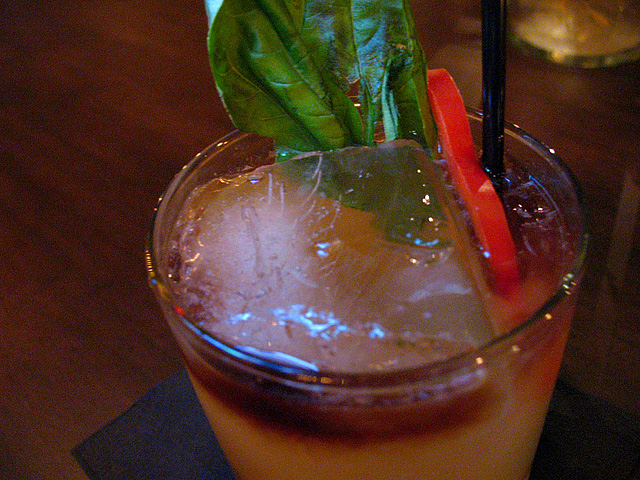 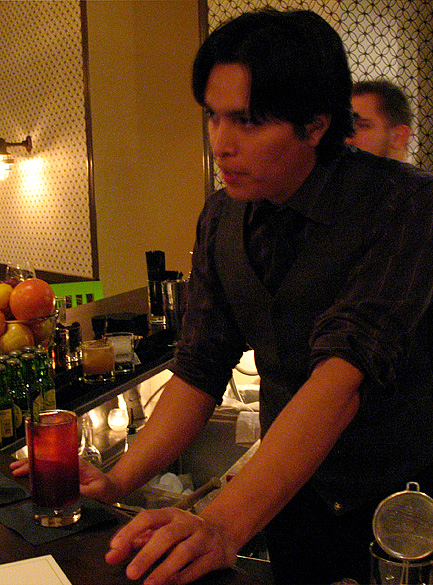 Lindsey went with a Dealer’s Choice ($13), a nicely balanced bespoke cocktail from Martinez that was based on Lindsey’s spirit and flavor preferences.

Cinnamon Shine, minus the 'shine.

Caroline had a Cinnamon Shine ($12), made with Tres Agaves (normally Moonshine, but the bar was out of it that night), cinnamon syrup, lemon and bitters. As with our other cocktails, very nice and visually appealing. We may have lingered over Caroline’s drink a little too long, since she had to ask for it back from our end of the bar.

Executive Chef David Schimit (previously at Hotel Bel-Air and Buffalo Club) features a food menu that mirrors the cocktails in its fresh, seasonal ingredients and modern yet approachable take on New American cuisine. I had the cumin-crusted Buffalo Burger ($13), flavorful and well-executed. A tad more seasoning would make it even better. The menu said the burger is served with shoestring fries, but I loved the accompanying potato wedge: crispy/crunchy on the outside, soft and perfectly cooked inside. 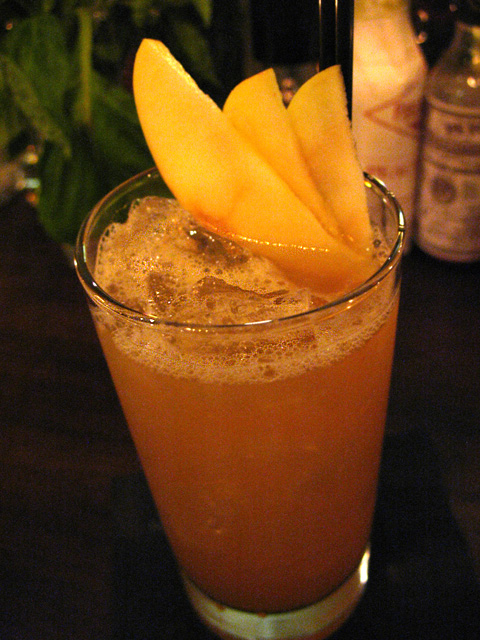 For my second round Black suggested a Robey creation, the Apple Blush ($13): Bulleitt Bourbon, lemon juice, cinnamon syrup, cran-pom reduction and Fuji apple. Perfectly matched to the crisp winter evening, the Apple Blush is a wonderful harvest of flavors in a collins glass.

The cacophony of Hollywood Blvd. is just up the street, but Les Deux Estate is meant to be a neighborhood spot that offers an alternative to the clubs it used to epitomize. Will it be that rare Hollywood sequel that surpasses the original? With top notch cocktails, food to match and moderate pricing, the doors to the Estate are wide open, and everyone is on the list.

Les Deux Estate is open Wednesday through Sunday, from 6pm to 2am.