Under the Spell of Campo de Encanto Pisco 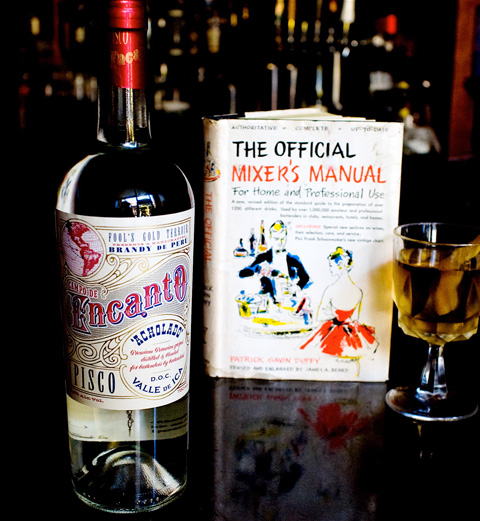 In his recent book Boozehound, author Jason Wilson recounts a trip to Peru that he took with a bartender, a sommelier and a Peruvian master distiller: Duggan McDonnell (Cantina), Walter Moore and Carlos Romero, respectively. At the time, McDonnell, Moore and Romero were developing Campo de Encanto Pisco, an Acholado (blended) style of the Peruvian grape brandy. The group made their way to the wine region of the Ica Valley, three hundred kilometers south of Lima. They stayed at the old resort of Huacachina, described by Wilson as “a cross between a hippie ski town and Mos Eisley.” Legend says that Huacachina is haunted by a witch, and sure enough someone in the group saw her by a lagoon one night.

(I asked McDonnell about the Huacachina witch during a holiday event last month. McDonnell confirmed Wilson’s story and elaborated on it with the unique perspective of someone who was there and lived to tell the tale.)

Despite her supposed man-eating proclivities, the witch was a benevolent spirit that night. She spared the fellow and her presence was apparently a good omen for the team, which launched Campo de Encanto (“Field of Enchantment”) in June 2010. It wasn’t long before the accolades started coming in: Paul Clarke (Cocktail Chronicles) called it “mind-blowing stuff, absolutely the best pisco I’ve ever tasted,” while Jonny Raglin (Comstock Saloon) said, “Encanto is simply the best spirit to hit the market in a long while.” Demand exceeded supply, and Encanto Pisco quickly sold out its initial run.

Then on November 5th, the Comision Nacional del Pisco of Peru (CONAPISCO) gave Encanto the highest honor possible for a pisco: the Gran Medalla de Oro, the Best in Show at the Grand Championship in Lima. Encanto beat over 300 other piscos to win the award. “What a tremendous and auspicious beginning!” said an exuberant McDonnell, Encanto’s co-founder and CEO. “We never expected this level of success in our rookie season. Thank you, Peru!”

Though Peru and Chile have long been rivals for the right to claim pisco as its own, there’s no dispute that pisco was developed in the 16th century, when the Spanish first planted vineyards in the coastal valleys of the Viceroyalty of Peru to produce orujo, a pomace brandy. Discarded grapes that didn’t measure up to quality standards were used by local farmers, who began distilling their own brandy-esque liquor. This peasant spirit would become popular with sailors, who began to call it pisco, after the Viceroyalty port town.

My first in-depth encounter with Encanto was last fall at La Descarga, at a tasting event that featured Encanto-based cocktails like the classic Pisco Sour and Pisco Punch (see below), and a La Descarga specialty, the Poco de Pina: Encanto Pisco, benedictine, lemon, sugar and bitters. I had previously tried Pisco Sours and pisco cocktails elsewhere, but the Encanto took these drinks to another level.

During their presentation, McDonnell and Moore walked us through the artisanal process of crafting Encanto Pisco: old vine grapes are hand-harvested, distilled once in a copper alembic still, blended by hand in small batches, then rested for nine months. Encanto is a bottled-at-proof spirit, with “nothing added, no preservatives, no sugar. Not even a drop of water.”

We then sampled the varietals that make up the proprietary Encanto blend: Quebranta (76%), Torontel (6%) and Italia (18%). While Encanto is anchored by the earthy, non-aromatic Quebranta, the Torontel and Italia add floral and fruit notes to the mix. Encanto has some horsepower, but the distillate emerges from its resting period with a refined, silky mouthfeel. Sipping the unctuous Encanto neat and enjoying its depth of flavor offers a tantalizing glimpse into its potential for wider appeal beyond the mixology realm.

From its origins in the vineyards of the Ica Valley to its recognition by CONAPISCO, Campo de Encanto Pisco is being hailed as a world-class spirit and the vanguard of the pisco category, and it’s still in its first year of release. Locally, Encanto can be found in cocktails like The Spare Room’s Peruvian Sunset and the Cusco’s Crown at Drago Centro. Whether it’s sipped neat or mixed into cocktails, Campo de Encanto is the pisco against which all others will be measured.

Campo de Encanto Pisco is currently available online and in California, New York and Oregon, with distribution scheduled to expand to Illinois, Texas, Nevada and Florida over the next several months. 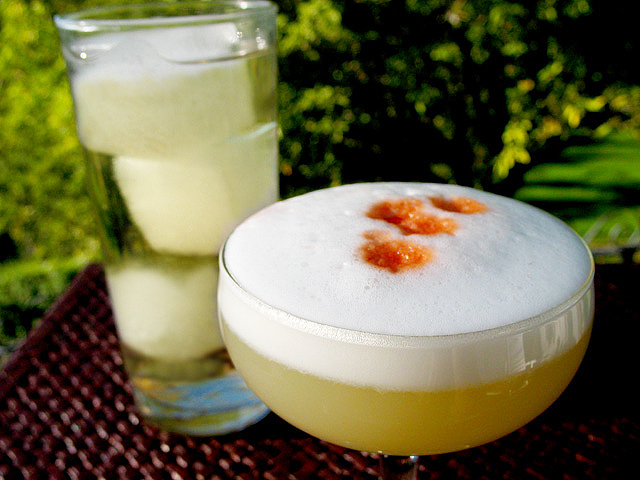 The Cusco Mule and the classic Pisco Sour.

Campo de Encanto Pisco Cocktail Recipes
Campo de Encanto wears its San Francisco pride on its sleeve: its tagline is “The Spirit of San Francisco;” the label evokes a saloon in its design; S.F. is pinpointed by an “X” marks-the-spot map image; a vintage photo of the House of Pisco is on the inside of the label. San Francisco’s love affair with pisco began in 1839, when S.F. was known as Yerba Buena and pisco first arrived from Peru via trading ship. At the height of the Gold Rush, pisco was flowing throughout San Francisco, especially in the infamous red-light district known as the Barbary Coast, where the Bank Exchange & Saloon was located. It was there that a potent potable known as Pisco Punch was invented by owner Duncan Nicol. The drink would gain worldwide fame, thanks to writers like Mark Twain, Rudyard Kipling and New Yorker founder Harold Ross. The Bank Exchange was forced to close because of Prohibition, and several years later Nicol supposedly took the Pisco Punch recipe with him to his grave.

The Pisco Sour likewise has a San Francisco connection, thanks to Bay Area native Victor Morris, the expat who created his Whiskey Sour variation in the 1920s at his Morris Bar in downtown Lima. The Pisco Sour is now the National Cocktail of Peru, celebrated annually with Pisco Sour Day on the first Saturday in February.

Of course, Encanto can do much more than fuel the two iconic pisco drinks. When McDonnell sent a review bottle of Encanto Pisco, the package included a bottle of Reed’s Extra Ginger Brew, a couple of Meyer lemons, and this recipe for the Cusco Mule: “Into your favorite highball glass, pour 2 fingers of Campo de Encanto Pisco; squeeze in some homegrown Meyer lemon juice; add a splash or three of ginger beer, then ice, maybe stir it. Definitely enjoy it.” I took his advice a few weekends ago, when Los Angeles had to endure several days of picture perfect, 80-degree weather. Enjoying the Cusco Mule’s refreshing bite al fresco was a wonderful taste of the warmer months ahead.

Another recipe McDonnell shared was the Viceroy, his homage to the historic “New Spain,” the Viceroyalty of Peru.