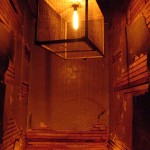 It’s a safe bet that Harvard & Stone is the only bar in the country where no one does a double take at the sight of Rosie the Riveter going to town on a burlap sack with a mallet. Now open in Thai Town, Harvard & Stone is the latest from Mark and Johnny Houston, the owners of nearby La Descarga. Harvard & Stone follows the successful model established by its sister venue: take an existing dive bar (the former Stone Bar space), give it an aged patina that evokes another era (World War II), and have Steve Livigni and Pablo Moix create a stellar bar program. 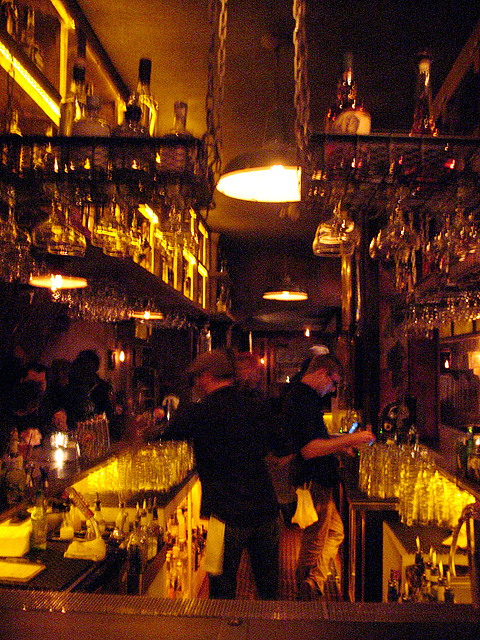 Stepping inside Harvard & Stone from Hollywood Blvd. is akin to walking into a wartime factory the Greatest Generation would find familiar. A central bar dominates the double height main room. Bottles are stored in metal baskets hanging from chains; display cages hold more bottles on the other side. Just off the entrance is a stage, which will host unannounced, impromptu music sets. A narrow platform (which appeared to be accessible only via ladder) is presumably going to feature dancers. For opening night, a DJ was set up near the foot of the staircase. The upstairs area was roped off, though it’s scheduled to open soon.

Like La Descarga, Harvard & Stone’s striking design makes excellent use of two R’s: reclaim and re-purpose. Rusted machinery, girders, exposed ducts, distressed wood and peeling walls contribute to an evocative, industrial interior. Sliding doors are used throughout, from a semi-private first floor sitting room to the restrooms. Vintage propaganda and safety posters are used as wallpaper, while metallic light fixtures and timecards continue the theme. Adding to the factory vibe is the occasional sound of hammering, thanks to the mallet-wielding bartenders crushing ice in the sacks. The only thing missing are secret underground tunnels named Tom, Dick and Harry, though I wouldn’t put anything past the ingenuity of this group.

I met my friends Amy and Lena just after Harvard & Stone officially opened its doors, and kicked things off with Baby’s First Bourbon: Bulleit Bourbon, St. Vincent Orgeat, lemon juice and Angostura Bitters. Amy began with a Trinidad Sour: Angostura Bitters, St. Vincent Orgeat, lemon juice and ROOT. Lena had the Fernet Cocktail: Fernet Branca, Canton Ginger, Carpano Antica, lime juice, Regatta ginger beer. It could be due to the crisp, chilly night but I was surprisingly into Amy and Lena’s drinks more; both had a bite and depth that mine didn’t. Baby’s First Bourbon went down almost too easily, certainly not be a bad thing if you’re in the mood. 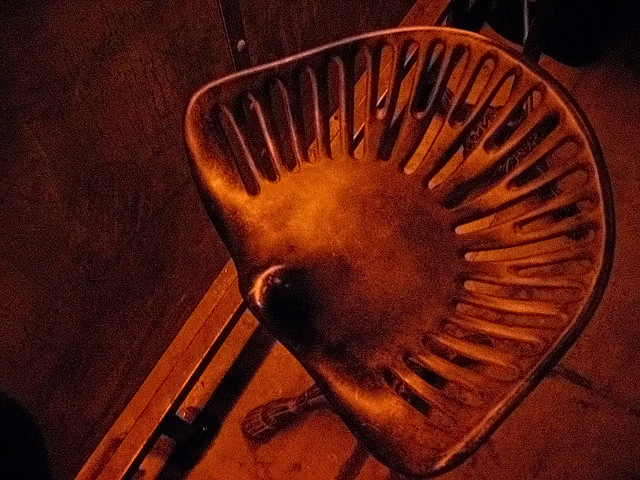 Past a crackling fireplace is an office door labeled Break Room, which opens into a hallway and the R&D Bar, an intimate space with a monthly featured spirit and a separate cocktail menu that changes nightly. Whiskey is this month’s spirit, with gin on deck for March. On opening night, the R&D Bar showcased the whiskies of Heaven Hill Distileries, hosted by Andie Brokaw with Vera behind the stick. We pulled up a couple of barstools (made from tractor seats) to try Vera’s one-night-only menu. 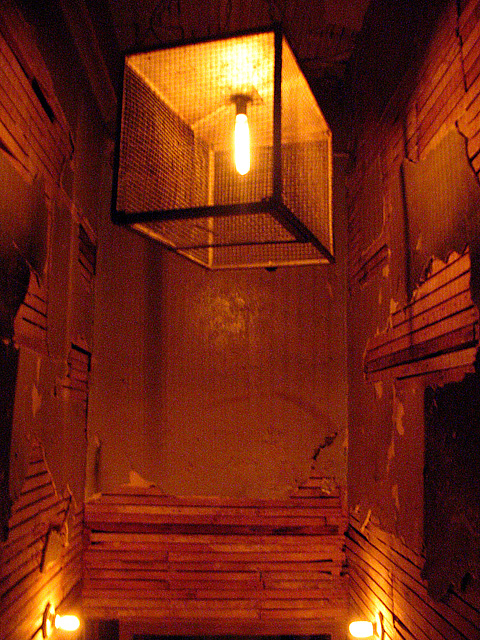 For Round Two, Amy went with an Opening Night Jitters, made with Fighting Cock Bourbon, fresh lemon juice, maple syrup, rhubarb bitters and a rosemary garnish. Lena had the Ginger Sour: Evan Williams Bourbon, fresh lemon juice, ginger syrup, egg whites and freshly grated nutmeg. Brokaw suggested orange instead of lemon for the Elijah Smash, which made a world of difference: Elijah Craig 12, muddled orange, cane sugar, zest. This time I could declare victory for Best in Round, though a slim one over the enjoyable funk of the Jitters and Lena’s rich, tangy Sour. Vera later made a Manhattan with Rittenhouse 100, a classic that somehow felt so right in the gritty space. (Of course, if I could have a well-made Manhattan at a car wash I’d still say it felt right, but I digress.)

As the night went on, bartenders from all over town stopped by to check out the new kid on the block, including Julian Cox, Aidan Demarest, Giovanni Martinez, Lindsay Nader, Naomi Schimek, Juan Sevilla, Devon Tarby and Marcos Tello. Cox even stepped behind the bar briefly, before an instant crush of excited guests sent him right back to the other side. 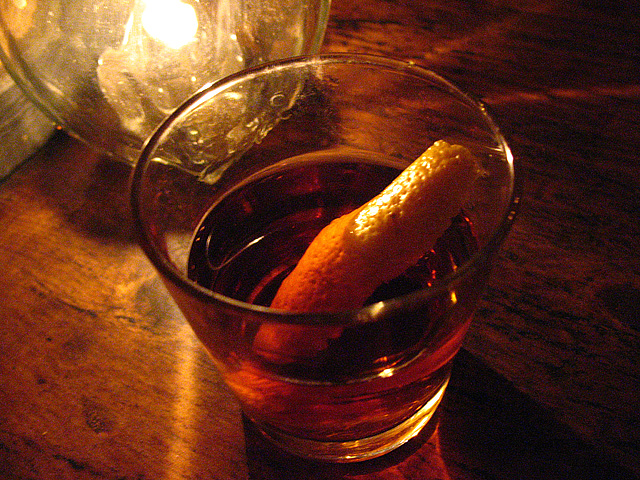 Near the end of the night, Livigni suggested an off-menu variation of the Scaffa No. 1 (Aviation Gin, Benedictine, Angostura Bitters), with aquavit in place of the gin. Served neat, the room temperature cocktail had a nice spice and character for a deceptively simple drink. As a sipper it was perfect for hanging outside on the smoking patio/alley.

Harvard & Stone is certain to be another hit for the La Descarga crew, transporting Angelenos with a lively mix of cocktails, music and nostalgia served up in an exceptionally designed venue.

Harvard & Stone is open every night at 8pm.

Update 2/25: Mia Sarazen (aka Sledgehammer Gaga) will be in the R&D Bar tonight (Feb. 25) with her exclusive whiskey cocktail menu. Be sure to stop by and wish her luck before she and Jennifer Contraveos head to New York for the 42 Below Cocktail World Cup Nationals!