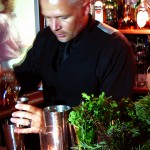 When Michael McCarty opened his eponymous restaurant in 1979 at the age of 25, Michael’s became an instant success and is now recognized as one of the progenitors of California cuisine and the modern locavore movement. Thirty-plus years on, the groundbreaking farm-to-table menu, award-winning wine list, famed outdoor garden patio and contemporary art collection have made Michael’s an icon in L.A.’s fine dining history. Among the renowned chefs who have worked at Michael’s are Jonathan Waxman, Mark Peel, Nancy Silverton, Roy Yamaguchi and Sang Yoon, to name just a few.

Jason Robey behind the stick at Michael's.

After hosting a series of guest mixologist events at Michael’s earlier this year, McCarty brought in Jason Robey (most recently at Les Deux Estate) to create a Farm-to-Glass Mixology Program, which debuted last Friday, March 25th. Robey’s cocktails (priced at $12) will feature seasonal herbs and fruits grown on Michael’s new rooftop garden, along with fresh produce from the nearby Santa Monica Farmers’ Market. Given the limited availability of many of these ingredients, the cocktail list is expected to change frequently.

To celebrate the cocktail menu launch, Michael’s hosted a media tasting event in the new lounge, a former dining room that now features low tables and stools for casual seating. Joining me at the two-hour gathering were two of my favorite imbibers, my friend Lena and Aaron Tell, aka The Savory Hunter. With dinner service under way, Robey was already busy behind the small bar as the tasting event got started. Fortunately he had backup in the person of Joel Black, who was torching a rosemary sprig when Aaron and I said our hellos.

I started with the Schiphol Layover, made with Bols Genever, Cynar, Lemon, and Avocado Honey. Named after the Amsterdam airport, the Schiphol Layover deftly balances the malty genever and the bitter amaro, rounded off by the citrus and rich, dark honey. Bols and Cynar are two of my favorites, so it would be hard not to like this one. I could see myself enjoying the Schiphol Layover even more as a digestif. 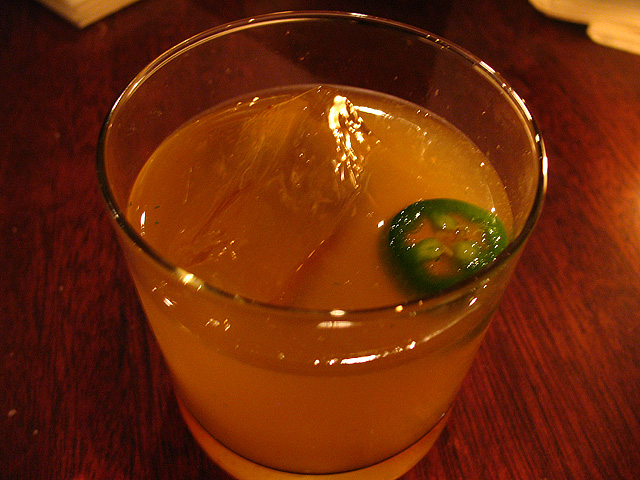 Lena went with the Karai Karai: Yamazaki 12-Year Single Malt Whisky, Jalapeño/Red Bell Pepper Simple, Lemon, Cilantro, Jalapeño, Grapefruit, and Chipotle Tabasco. Even if you didn’t know that karai is the Japanese word for “spicy,” one sip of this bright and smoky cocktail with a kick is the only translation you’ll need. 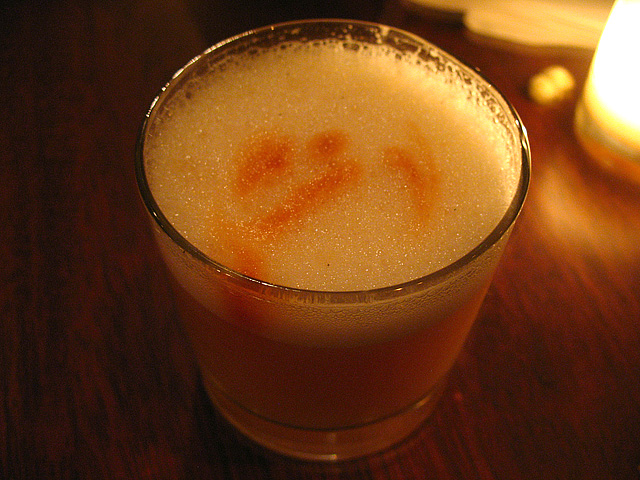 The gregarious McCarty, who welcomed guests as they entered his restaurant, checked in on us and talked briefly about the new menu. When asked how he met Robey, he quipped that he couldn’t escape the Sporting Life, the tight-knit community of local bartenders and cocktail enthusiasts. McCarty said he was partially inspired to add a craft cocktail menu by bars like Death & Company in New York, but he gave the most credit for the idea to Stefano Turrini of Dimmi Liquore di Milano.

To pair with the cocktails, the kitchen sent out items from the new Bar Bites menu, including: 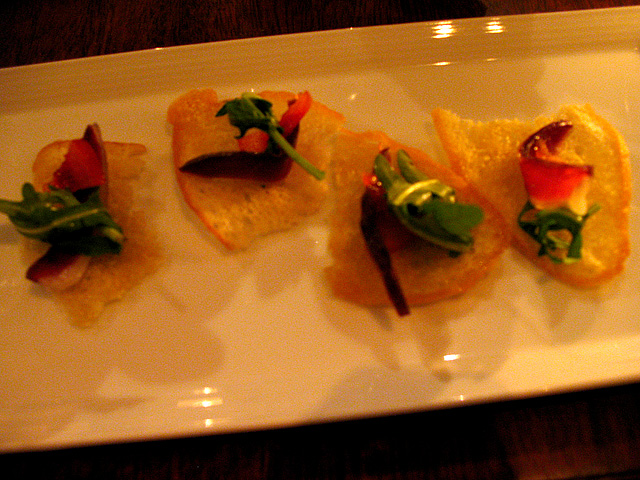 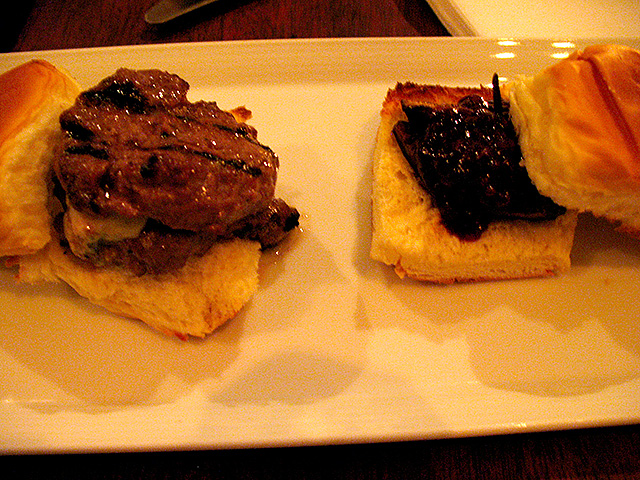 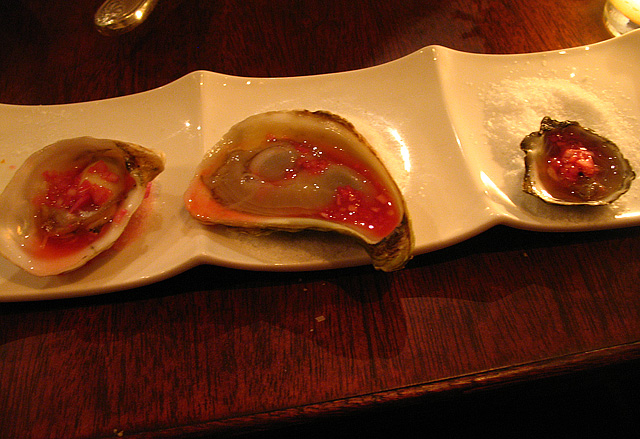 The appetizers were good, with prices in the range of the rest of Michael’s menus. One dish that didn’t really work was the Sage-and-Lemon Popcorn ($8), which looked interesting on the menu but didn’t seem to have any of the herb or citrus added and was essentially a bowl of plain popcorn.

Lena enjoyed her sip of the Regional Export so much she had another one for her second round, while Aaron and I selected the remaining cocktails. Robey and Black were slammed with the Friday night dinner crowd, so it was understandable for our drinks to take a little longer than usual. The situation was exacerbated by an annoying Plus One, who kept intercepting our drinks without ordering one herself. Fortunately we were distracted by the plates of food that kept magically appearing. 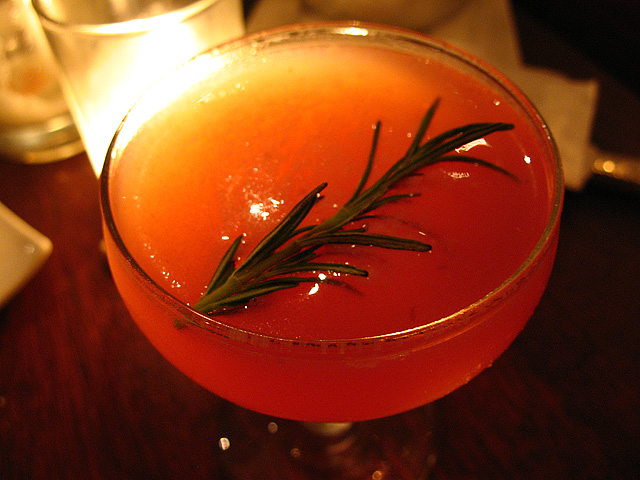 For Round Two I got the Mary Rose, made with Cranberry/Ginger-infused Tito’s Vodka, Lime, Vanilla Simple Syrup, garnished with Charred Rosemary. The rosemary lends a wonderful aroma and depth to the fruit-forward, sweet drink. It’s the most approachable cocktail on the new menu, and likely to be a favorite come summer time. 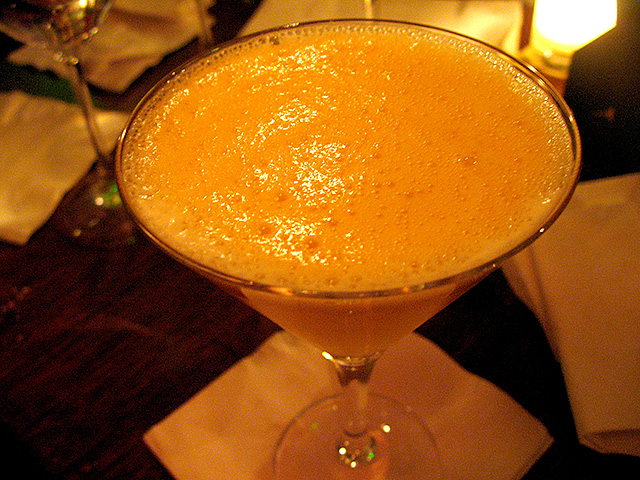 The Big Red Hat is neither a red nor a hat. Discuss.

Craft cocktails utilizing fresh, seasonal ingredients may not be a revolutionary concept these days, but with a dearth of top notch mixology destinations on the Westside, the new bar program at Michael’s is a welcome addition to the scene. The guest mixologist nights are scheduled to return in a few weeks, offering even more incentive for cocktail enthusiasts to head to the 310.