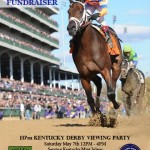 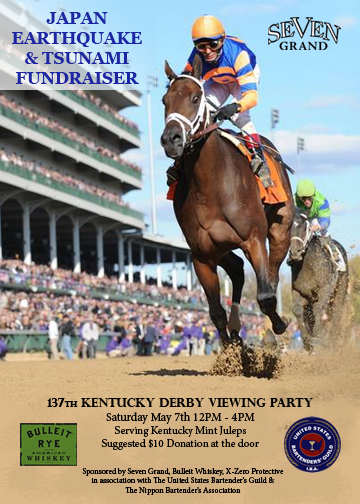 The 137th running of the Kentucky Derby takes place this Saturday, and Angelenos can watch “The Most Exciting Two Minutes in Sports,” enjoy tasty cocktails and BBQ, and raise money for Japan disaster relief at the same great event. On Saturday, May 7th, Seven Grand, Bulleit Distilling and X-Zero Protective, in association with the USBGLA and the Nippon Bartenders Association, present a special Kentucky Derby Viewing Party. The event is a fundraiser for the American Red Cross and its ongoing efforts in response to the Great East Japan Earthquake and Tsunami.

The emcee for this Derby Day bash is the fabulous Hollis Bulleit, the World Ambassador for her family’s Bulleit Bourbon and the recently released Bulleit Rye Whiskey. Bulleit will be handing out prizes in a raffle, with proceeds (along with all donations at the door) going to the Red Cross for Japan relief. As of April 28, 2011, the American Red Cross had raised more than $197 million for its Japan earthquake and Pacific tsunami response, including more than $4.5 million in text donations.

Seven Grand is opening its doors early for this special event, which has a suggested donation of $10 at the door for entry. To get everyone in the mood for The Run for the Roses, the bar will be serving Bulleit Bourbon punch, Bulleit Rye Old Fashioneds, and of course, the “very dream of drinks,” Mint Juleps. And to go with the cocktails, Spring Street Smoke House is serving its classic American BBQ.

Bulleit cocktails, BBQ, and Japan relief: now THAT is a winning trifecta!

NOTE: In order to attend this event, you must RSVP to Jason Schiffer: jason@usbgla.com.

All donations at the door and raffle proceeds go to the Red Cross for Japan relief.