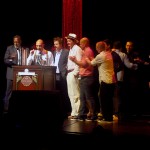 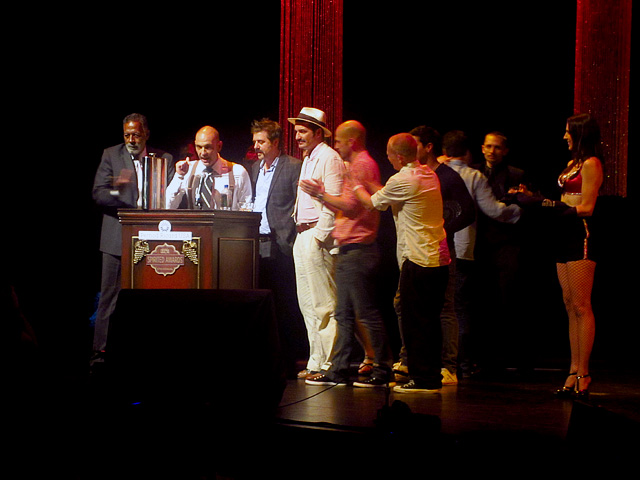 The Employees Only crew accepts one of its two Spirited Awards.

The Big Apple felt right at home in The Big Easy last Saturday night, thanks to six New York-based nominees taking home awards at the Fifth Annual Tales of the Cocktail Spirited Awards, held at the Mahalia Jackson Theater in New Orleans. Leading the way for New York was Employees Only, which won the awards for World’s Best Cocktail Bar and World’s Best Drinks Selection. Also joining the New York party: Kenta Goto (Pegu Club) and Sam Ross (Milk & Honey), who tied for the American Bartender of the Year award (a first for the Spirited Awards); Eleven Madison Park for Best Restaurant Bar (also, winner of the unofficial award for Biggest Group Onstage to Accept a Spirited Award);Pegu Club’s Audrey Saunders, who was presented the Best Bar Mentor award by her own mentor, the legendary Dale DeGroff; and Punch by David Wondrich for Best New Cocktail/Bartending Book.

A few highlights and more unofficial awards from the ceremony:

Simon Ford kicked off the festivities by presenting John Lermayer the tongue-in-cheek Simon Ford Uh Oh Award, so-named for the first words that come to mind when any of the nominees arrive in your bar or city. 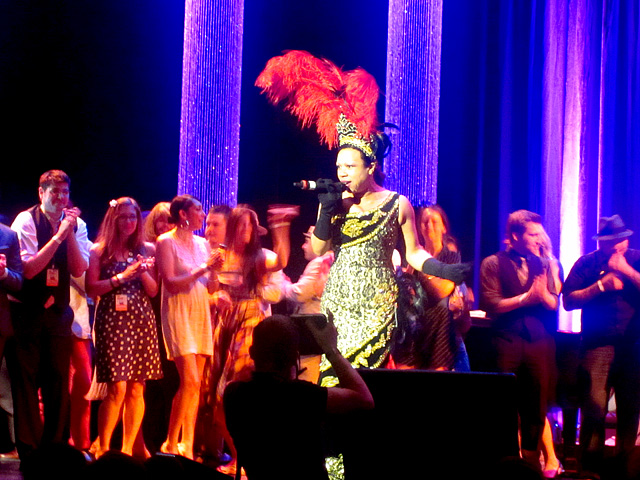 After this year’s Cocktail Apprentices (including LA’s own Brent Falco) were introduced, Senior Apprentice Franky Marshall (Clover Club) brought down the house with her sizzling performance.

Best Person to Sit Next to at the Spirited Awards: Dänny Ronen (Fair Trade Spirits), whose hysterical running commentary during the show makes me think someone needs to give him a headset so he can broadcast during the online streaming of next year’s awards.

Best Entrance: Camper English (Alcademics), who couldn’t find the steps to the stage and improvised with a graceful somersault/roll to accept his award for Best Cocktail Writing. 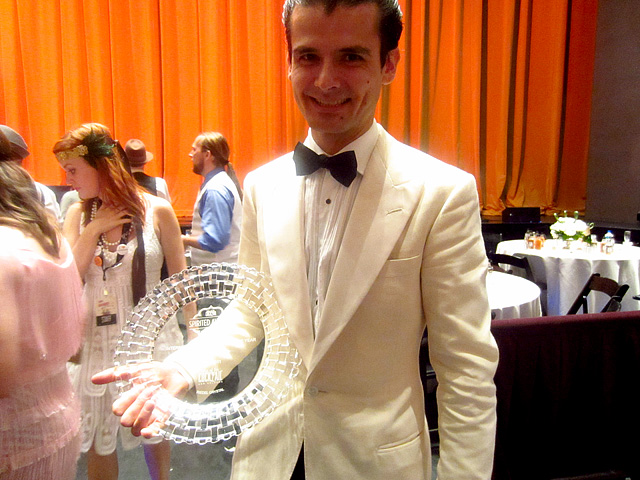 The dashing Erik Lorincz (pictured with his award for International Bartender of the Year), presented gaz regan with a very special book.

During his heartfelt acceptance speech for The Savoy’s award for the World’s Best Hotel Bar, Erik Lorincz talked about how one of the first cocktail books he ever owned (before he could even speak English) was written by gaz regan, the man to whom he then handed The Bartenders’ Travelling Book. (FYI if you’re clicking through, the book’s official website starts to auto-play music.)

Congratulations to the winners and cheers to all the nominees!

Following is the complete list of the 2011 Spirited Awards nominees, with the winners in bold.