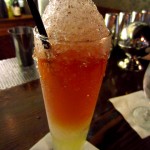 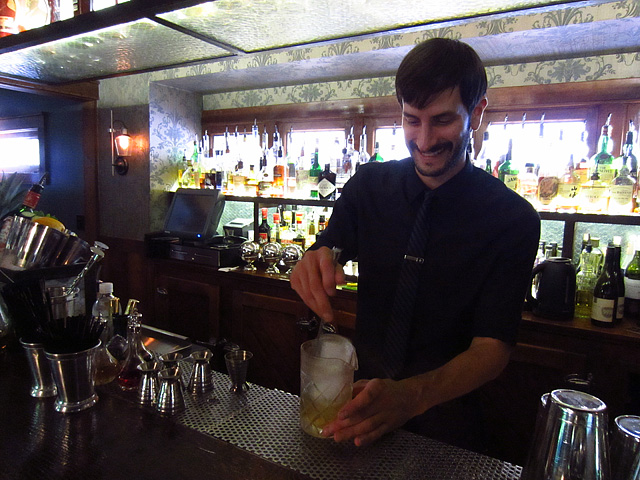 Danny Cymbal behind the stick at 1886.

Pasadena’s 1886 Bar at The Raymond recently debuted its Summer Cocktail Menu, featuring 16 drinks divided into four categories of cocktails: Regional, Seasonal, Shaken and Stirred. Marcos Tello and the 1886 team have created a menu that includes signature summer cocktails, Tiki drinks, unearthed classics, and salutes to bartenders from LA and New York. Bartender Danny Cymbal was behind the stick when I stopped by 1886 recently for a hosted tasting. 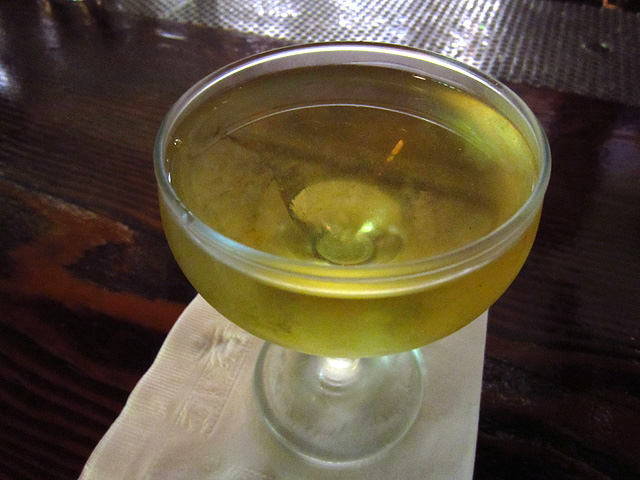 I started with Cymbal’s Vintage Caprice ($18): Beefeater Gin, Dry Vermouth, Benedictine, and orange bitters. Cymbal aged the Vintage Caprice for four months in a bourbon barrel rinsed with sherry. For comparison, Cymbal made a new, unaged Vintage Caprice to help me get a better sense of the effects of the barrel aging. The original cocktail is bright and sharp, while the aged version is softer and rounded, with a slightly darker hue. It’s not a night-and-day difference, but the cocktail definitely benefited from its time in the barrel. The current version of the Vintage Caprice comes from the first half of the barrel; the second half is continuing to age another four months.

The tasting included selections from Chef Tim Guiltinan’s modern American menu, which matches the creativity of the 1886 cocktails. Cymbal offered a few spot-on suggestions for items from the Bar Menu, including the superb Pork Belly ($9): cured, pressed and crisped, served with bourbon barrel-aged maple, apple, celery and chili. Each bite yielded new flavors and textures, from the crispy and savory pork belly, to the sweet maple, and the crunch of the apple and celery. 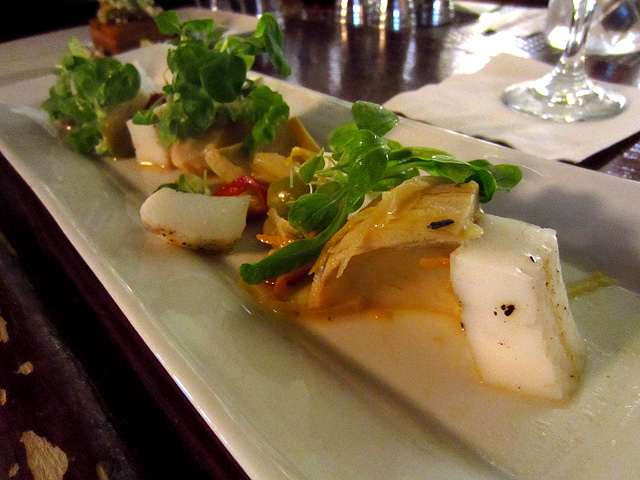 Another winner was the Twice Cooked Squid ($12) with marinated olives, artichokes and oranges. A more subtle dish compared to the pork belly, the squid was firm but not rubbery, offset by the piquant olives and the tangy artichoke. 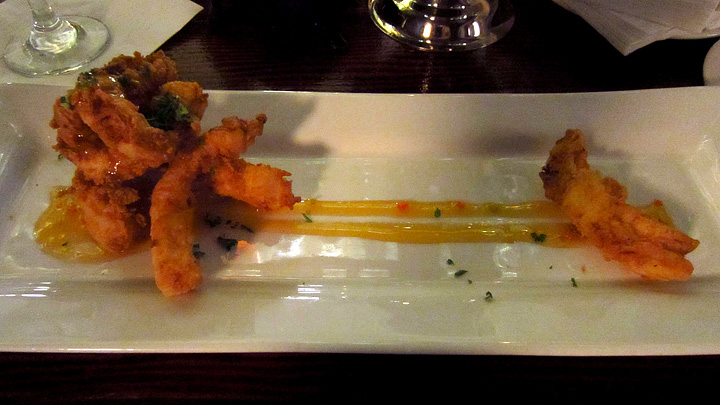 Of the three apps, the Crispy Szechuan Fish ($10), made with Vietnamese Basa and served with a spicy sweet and sour sauce, was my least favorite. Which is to say it was merely very good. I thought it could have used more heat, but this minor quibble didn’t stop me from eating the whole dish.

Next was a Regional cocktail, the Media Park Swizzle ($14): Bols Genever, sherry, ginger, falernum and lime. Matt Wallace originally called this cocktail the Highland Park Swizzle, but apparently there’s already a drink with that name, hence the tribute to the small park in Culver City. A labor-intensive cocktail that’s well worth the wait for the layers of flavor that slowly coalesce as the crushed ice melts. 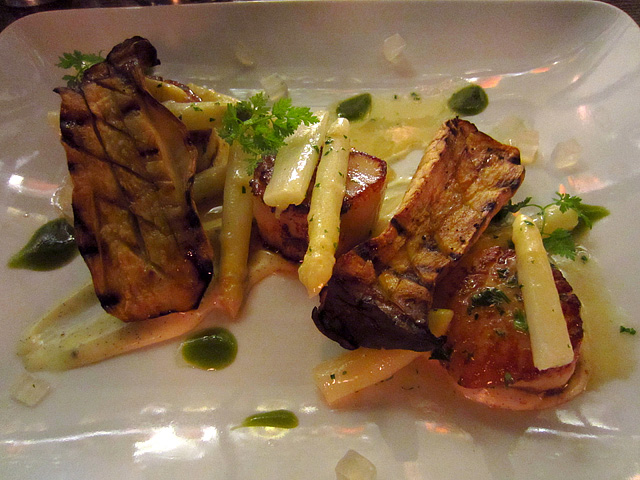 For the main, I opted for the Hand Harvested Scallops ($33), served with king trumpet mushrooms, white asparagus and cilantro. The plump scallops were perfectly cooked, with the ideal smoky sear on the outside and buttery flesh on the inside. The vegetables were equally enjoyable, especially the grilled mushrooms. Tiny, clear cubes of champagne solidified with agar add a whimsical touch. 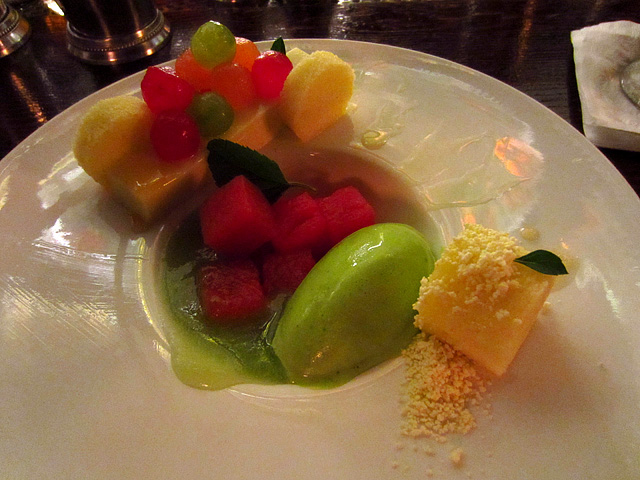 Dessert was the wonderful Carbonated Watermelon ($12): yuzu curd, liquid cucumber, compressed melons, olive oil cake and spearmint ice cream. For the olive oil cake, Guiltinan uses olive oil instead of butter and malto dextrin to make an olive oil “crumble” for the topping. A perfect seasonal ending to an excellent meal, with all of Guiltinan’s inventive playfulness on display in one dish.

Last but not least was the Bourbon Peach Smash, a Seasonal take on the category made with bourbon, peach, mint and lemon. Even if Cymbal hadn’t told me the Bourbon Peach Smash has been the best seller of the new menu, I probably could have guessed; several guests ordered it during my tasting session. A cocktail well-suited for the 1886 patio, which I intend to use next time.

It’s been a relatively mild summer here in LA, but don’t let that stop you from checking out the new 1886 menu, which is chock full of drinks that are perfect for the Dog Days of summer. Don’t slack, though; the fall will be here before you know it, and with it an all-new menu. I know that I have a few more visits ahead of me; despite lingering at 1886 for several hours, I’ve only scratched the surface of the summer cocktail menu.