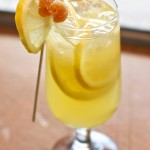 On the Trail of LA’s Bourbon Cocktails

By thirstyinla On September 5, 2011 · 4 Comments · In Uncategorized

September is National Bourbon Heritage Month, an annual celebration of “America’s Native Spirit” that first took place in 2007, when the Senate unanimously passed a bill sponsored by Senator Jim Bunning (R-Kentucky) on August 2nd of that year. While the Kentucky Bourbon Trail and the annual Kentucky Bourbon Festival are on many a spirited bucket list, Angelenos can vicariously join in the festivities by enjoying Kentucky’s finest in cocktails all over town. Our round-up begins in Marina del Rey, heads east into downtown, and ends in Pasadena. Of course, you have all month to celebrate National Bourbon Heritage Month, and nearly all of the cocktails will be available after September, so please imbibe responsibly.

The picturesque views of the marina and Mediterranean-inspired coastal cuisine of Cafe del Rey may seem a world away from the Bluegrass State, but it won’t be hard to picture yourself in Bardstown when you’re sipping the Gingered Bourbon Lemonade: Citrus-infused Woodford Reserve Bourbon, housemade Sour, Cointreau, ginger and lemon ($13). (See below for recipe.)

Located inside The Victorian in Santa Monica, the Basement Tavern reportedly sells the largest volume of Buffalo Trace Bourbon west of the Mississippi, and a big reason is Delia’s Elixir: Buffalo Trace Bourbon, agave nectar, raspberries and lemon ($10). Stop by for Bluegrass Wednesdays, when the intimate space is transformed into a good ol’ Kentucky home.

The brand new SmithHouse in Century City features food by Top Chef alum Angelo Sosa, 120 beers on tap, and a cocktail menu created by the powerhouse trio of Jason Bran, Damian Windsor and Simon Ford. Arm yourself with a Black N’ Bulleit (Bulleit Bourbon, Cassis, Blackberries, and Orange, $12) and then reload with a classic, a Bulleit-based Old Fashioned.

Be sure to catch the Tim Burton exhibition at LACMA before it ends its five-month run on October 31st, then head to Stark Bar for the Secret Cocktail, made with bourbon, applejack, egg white, freshly squeezed lemon juice, and grenadine ($12).

The Hollywood Roosevelt Hotel offers plenty of options for the bourbon lover. In the Library Bar, the ever-inventive Matt Biancaniello can create a bespoke bourbon cocktail with the freshest seasonal ingredients, or ask for his Kentucky Bubble Bath, made with Bulleit Bourbon, housemade lavender syrup and a Cynar float. Also located on the lobby level is Public Kitchen and Bar, with The Bistro Sidecar: Basil Hayden Bourbon, lemon, and Cointreau ($9). Upstairs, The Spare Room features signature creations like the Kentucky Glove Box (Buffalo Trace Bourbon, Yellow Chartreuse and lemon) and the State Fair, made with butter-infused bourbon, cherry wine and smoked salt caramel syrup.

Baby’s First Bourbon was on the opening menu at Harvard & Stone, and it remains the bestselling cocktail at the Thai Town venue: Bulleit Bourbon, St. Vincent Orgeat, lemon juice and Angostura Bitters.

In Los Feliz, Big Bar does a version of the classic Los Angeles Cocktail: Buffalo Trace Bourbon, sweet vermouth, lemon juice and egg. Shaken into a rich, creamy texture and topped with freshly grated nutmeg, it’s a great drink to transition into the crisp evenings that lie ahead.

Downtown’s JW Marriott at L.A. LIVE is another hotel with a quality craft cocktail program, as featured in The Mixing Room and its Sweet Reserve: Woodford Reserve Bourbon, Grapefruit, and Honey ($13).

And last but not least, the current bestseller of the 1886 Summer Cocktail Menu, the Bourbon Peach Smash: bourbon, peach, mint and lemon.