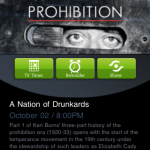 There’s an App for That: Ken Burns “Prohibition” Debuts on PBS

A new Ken Burns documentary is always a noteworthy event, and the acclaimed filmmaker’s latest project has been eagerly anticipated by cocktail enthusiasts since it was first announced: Prohibition, directed by Burns and Lynn Novick, airs nationally on PBS on October 2-4. The three-part, five-and-a-half-hour documentary film series tells the story of “the rise, rule, and fall of the Eighteenth Amendment to the U.S. Constitution and the entire era it encompassed.” 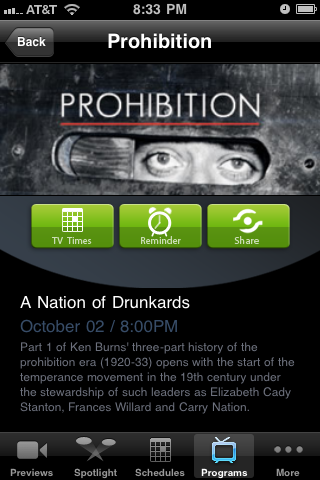 If you can’t wait until October to see how Burns chronicles the “Noble Experiment” in his signature style, you’re in luck: beginning Friday, September 23rd, you can watch the first episode (“A Nation of Drunkards”) when it debuts on the iPhone and iPad via the PBS app. Episode 2 (“A Nation of Scofflaws”) and Episode 3 (“A Nation of Hypocrites”) will be viewable on the app the day after their respective airdates, and remain available through Friday, October 7th. Each episode will also be streamed live on video.pbs.org, timed to the national broadcast.

PBS for iPad features 250 hours of free video, including full-length programs, as well as schedules, previews, and a calendar that can be synced with iCal. PBS for iPad and PBS Apps for the iPhone and iPod Touch are available for free download from the App Store.

For more information about Prohibition, visit the official website at www.pbs.org/kenburns/prohibition.