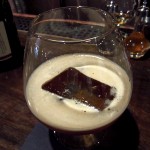 The Bar | Kitchen Winter Menu is Ready for Its Close-Up

The brutal winter of 2012 continues, with temperatures in downtown Los Angeles barely reaching the 70s earlier this week and peaking at 80 towards the end. These were the harsh conditions I had to endure in order to be at Bar | Kitchen at the O Hotel to assist with a video shoot. And by “assist” I mean sample the new Winter Dinner Menu during the session, which was hosted by General Manager Adam Weisblatt. While Executive Chef Vahan Tokmadjian presented delectable selections from his menu, bartender Daniel Zacharczuk was behind the stick mixing cocktails from the new list of seasonal drinks, which features a cocktail by Alex Day (Proprietors LLC) and creations from B|K bartenders Joe Swifka, Ricky Yarnall and Zacharczuk.

Thinking it was named after one of my all-time favorite movies, I had to try Swifka’s North by Northwest: raisin-infused Rhum Barbancourt, Krogstad Aquavit, Amaro Meletti, lime, Don’s Mix No. 2 and honey. Swifka later told me the name was chosen “as a sort of loose association nod to Scandinavia. Feels evocative of the flavors in the glass…and [the name] rolls off the tongue.” It’s a nuanced tall drink, with butterscotch notes from the rhum, anise and caraway seed from the aquavit, and something akin to the tangy bite of ginger in the sweet and slightly bitter finish.

Next up was one of Zacharczuk’s cocktails, the Summer Focus: Pueblo Viejo Añejo Tequila, Cynar, lime, cucumber and meringue. It’s a well-named cocktail, given current weather conditions. With the artichoke liqueur as its backbone, the floral and fruity añejo stands out and the endless summer continues with each sip. The “meringue” is actually the egg white that gives the drink its rich texture.

Then it was time for another Swifka libation, the Black Magic Woman: Redbreast Irish Whiskey, Heering Coffee Liqueur, Amaro Averna, lime and pineapple. A rinse of Connemara Peated Single Malt Irish Whiskey gives the cocktail an initial nose of smoky peatiness, but the first sip from the oversize brandy snifter is surprisingly tropical. Zacharczuk noted that you can taste each of the cocktail’s ingredients, though if you didn’t know the components, you’d likely think you’d ordered a Tiki drink. The Black Magic Woman had cast her spell; it’s an excellent drink that I will revisit again this season. All I need is B|K’s fireplace and a smoking jacket. 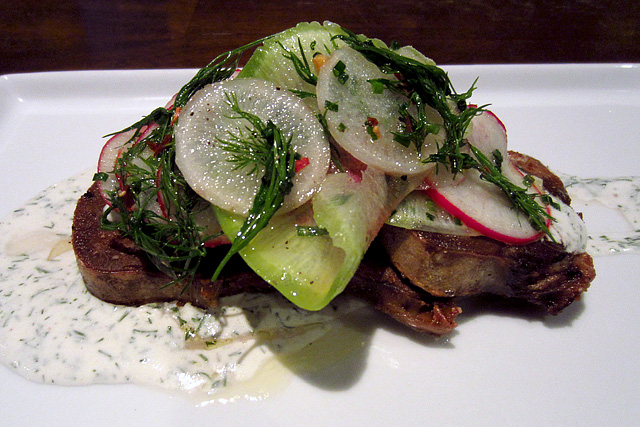 The soft-spoken Tokmadjian describes his menu as New American, which he interprets in dishes with influences from around the globe. First up from the Small Eats section: crispy beef tongue with horseradish, dill crème fraiche and radishes. The tongue was indeed crisp, paired nicely with the sharp bite of the radishes and horseradish.

I’ve enjoyed the roasted bone marrow with parsley salad, pickled Fresno chilies and grilled bread numerous times at Bar | Kitchen. But it was at another top downtown bar a couple of days before New Year’s Eve where the leftover bones were put to their greatest use: in a round of bone luges. (For the record, Cynar was poured for me, and it was delicious.) 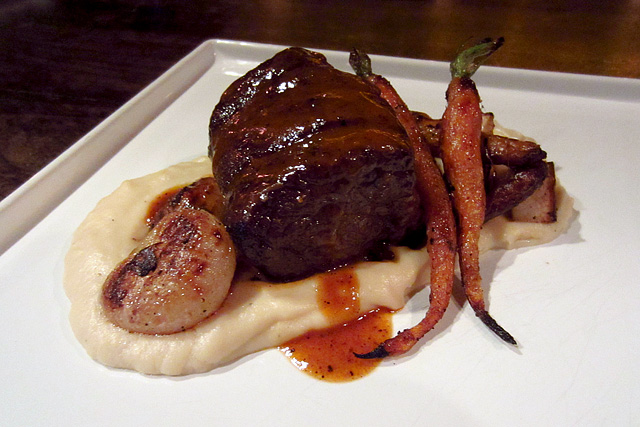 If the sunny blue skies decide to step aside for more appropriate weather, Tokmadjian’s beef short rib pot roast with winter vegetables, parsnip puree and horseradish will be an ideal dish to enjoy. Even if the temps stay warm, the fork-tender meat will still convey the spirit of the season with every bite.

And in case you were wondering, the crack tots are still on the menu.