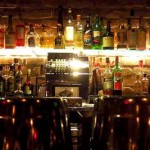 As great as 2011 was for thirsty Angelenos, 2012 has shifted into an even higher gear with a slew of new bars and cocktail programs. The former Les Deux has been reborn as Sadie, with cocktails by Giovanni Martinez. Ammo recently debuted a new farm-to-glass cocktail menu created by Jason Robey. On deck is the legendary Tom Bergin’s Tavern, with cocktails and a world-class Irish whiskey list curated by Marcos Tello. Also opening soon is Planet Dailies, with head bartender Joe Brooke and a Mixology101 program created by Salvatore Calabrese.

The dynamic drinks duo of Steve Livigni and Pablo Moix has been on fire, witness the recent openings of Blue Cow, Plan Check and the upcoming Pour Vous. Speaking of Messrs. Livigni and Moix, one of their previous projects, Harvard & Stone, is celebrating its one-year anniversary as this post goes live. H&S has had quite a run on its 12-month journey to becoming one of the best bars in the country, from a stellar list of bartenders in its R&D Bar to the top notch music on its stage and the DJs rocking the house.

There must be something about bars that open in February, because The Varnish is toasting its Three-Year Anniversary on Friday, February 24th! To mark the occasion, the acclaimed downtown LA bar is ladling free Bols Genever punch from 7pm-10pm (while it lasts). To put everyone in the proper celebratory mood, Jamie Elman (The Varnish’s regular Monday pianist) will be tickling the ivories all night.

Now you might be asking yourself, “Self, what about The Varnish’s no-standing-at-the-bar policy?” Not to worry, friends. Varnish GM Chris Bostick said for this special occasion “we don’t mind swinging the doors wide open for a few hours,” so come on down and wish a Happy Anniversary to The Varnish. Cheers to many more years of great cocktails!