The Maestro and The Conductor: Mixology 101 Opens at Original Farmers Market 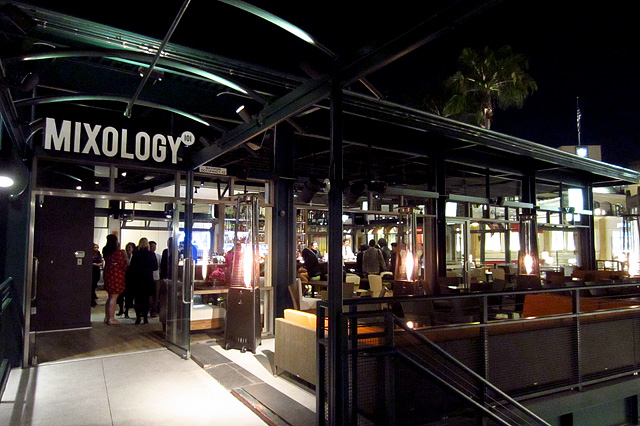 A craft cocktail bar crawl at the Original Farmers Market? Yes, such a thing is possible, thanks to the opening of Mixology 101 at Planet Dailies, the second location of the Planet Hollywood restaurant concept. With Short Order just around the corner, cocktail enthusiasts now have two Farmers Market imbibing options within walking distance of each other. While the new Planet Dailies isn’t open 24 hours like its Las Vegas sibling, it does have Mixology 101, which features a cocktail program created by Salvatore Calabrese (aka “The Maestro”). The acclaimed bartender’s latest venture is the eponymous Salvatore at Playboy, in the heart of London’s exclusive Mayfair. Mixology 101’s head bartender is LA’s own Joseph Brooke, who oversees a menu of 40+ cocktails divided into eight sections: Champagne Cocktails, Classics, Pre-Dinner, Martinis, Short & Sublime, Long & Luscious, Non-Alcoholic and After-Dinner. 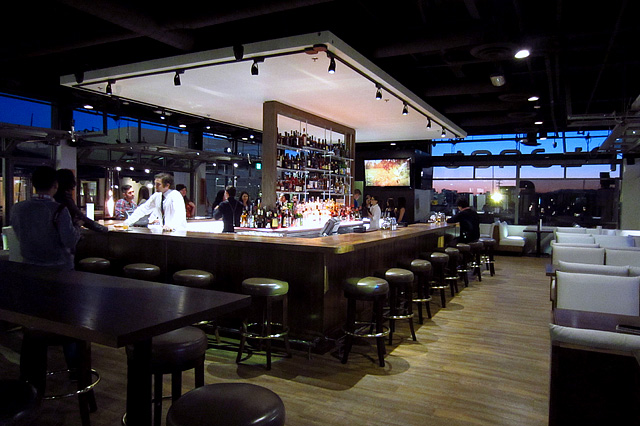 The Maestro himself was in the house at a media preview to demo a few cocktails with Brooke and Pierre Dos Santos, one of Calabrese’s bartenders from the Playboy Club. From Mixology 101’s second-level perch, the spacious, 215-person capacity venue offers great wraparound views. The mild weather on the preview night allowed all of the garage-style roll-up windows to be retracted for a nice indoor-outdoor flow. As the event progressed, the setting sun provided an impressive backdrop behind the west-facing side of the bar. Thankfully, the multiple flatscreens originally conceived for the space were nixed by Calabrese; only one TV is mounted on a wall. 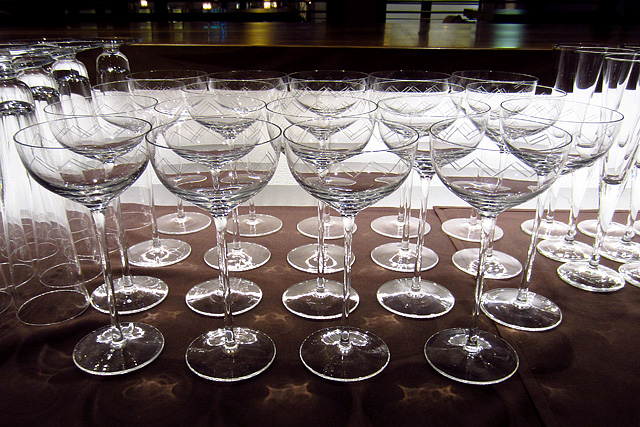 As the preview began, Brooke took me behind the bar to check out the numerous design elements that Calabrese has implemented for Mixology 101. Foremost among these features is the patented Calabrese Sink, a unique all-in-one unit that combines a sink, chopping board, bin, garbage chute and waste disposal. The rail is designed as part of what Calabrese calls his “3-step philosophy, [so that] the bartender only needs to take one step in each direction from his station to reach everything he needs.” Brooke pointed out the refrigerated drawers in the underbar, used to store fresh fruit, herbs and wells. (For more background on the Mixology 101 bar design, you can view images of its progenitor at the Cantilever Bar Systems website.) 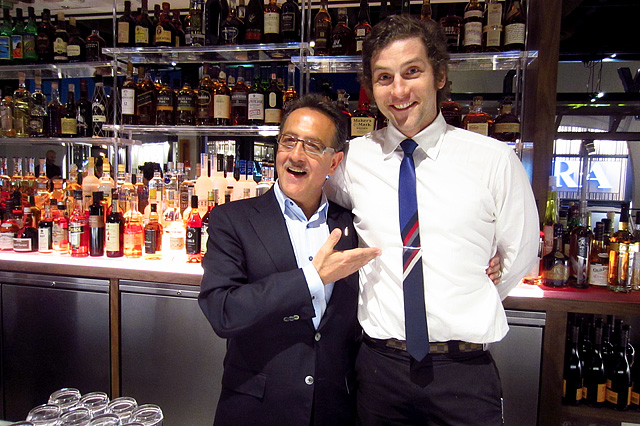 Calabrese welcomed everyone and shared some highlights of his award-winning career, which began at an early age in a bar in Maiori, a small village on Italy’s Amalfi Coast. He introduced Brooke as “The Conductor” and praised him for being the “guardian angel” of the bar program that bears Calabrese’s name. Brooke later said that the five days he spent in London learning all that he could from The Maestro was one of the best experiences of his career. Of his new gig, Brooke said simply, “I’m home.” 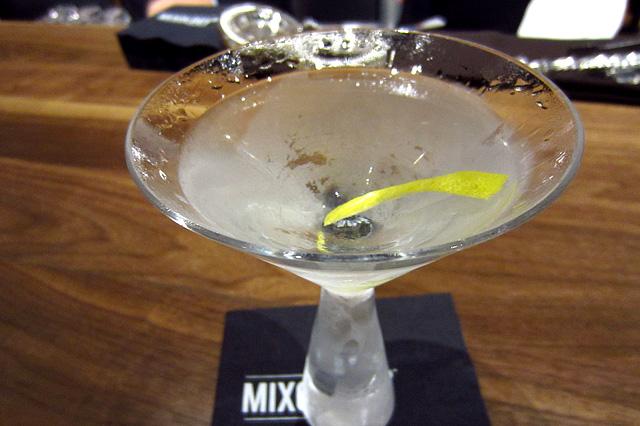 Speaking of home, the cocktail demos began with the House Martini, which Calabrese calls a “Direct Martini” because it’s made directly in the glass. Calabrese created his method in 1985, while he was a bartender at the Dukes Hotel. He said that Stanton Delaplane (Pulitzer Prize-winning writer for the San Francisco Chronicle, credited with introducing the Irish Coffee to the U.S.) came into the bar and asked Calabrese for a “very, very cold and very, very dry” Martini. Calabrese was able to make the drink either cold or dry enough, but not both to Delaplane’s satisfaction. Calabrese was determined to please his customer and this scene replayed itself for the next several afternoons.

At one point, Calabrese noticed how a fish and chip shop would use bottles to sprinkle vinegar over its chips. He realized that he could use a bitters bottle to control the amount of vermouth in the Martini, and thus solve the first problem, dryness. The second problem was the coldness, so he stored the gin and the glass in the freezer. The next time Delaplane came in, Calabrese pulled the glass and gin from the freezer and poured the chilled gin directly into the frosty glass. He floated a few drops of vermouth (without mixing it) and finished with a lemon twist. Delaplane took a sip and said nothing. He asked for another Martini, took a sip, said nothing, and walked away from a perplexed Calabrese. The next day, Delaplane came in, introduced himself as a writer for the Chronicle, and said his next article would declare the Dukes Martini as the best he’d ever had. Calabrese said, “It took God six days to create the perfect world. It took me five days to create the perfect Martini.” 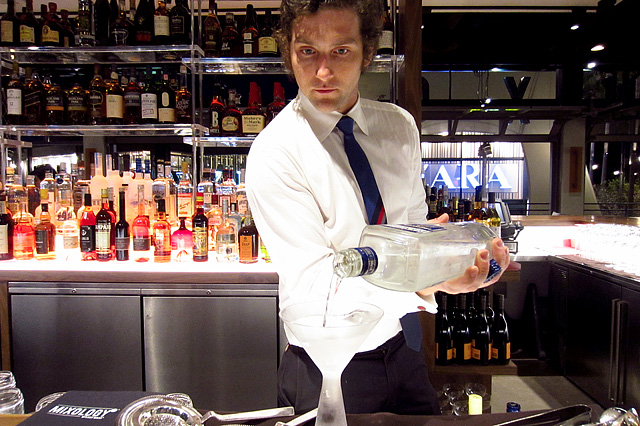 House Martini: for dilution, a mist of water coats the chilled glass. Ice flakes form inside and the gin is poured. 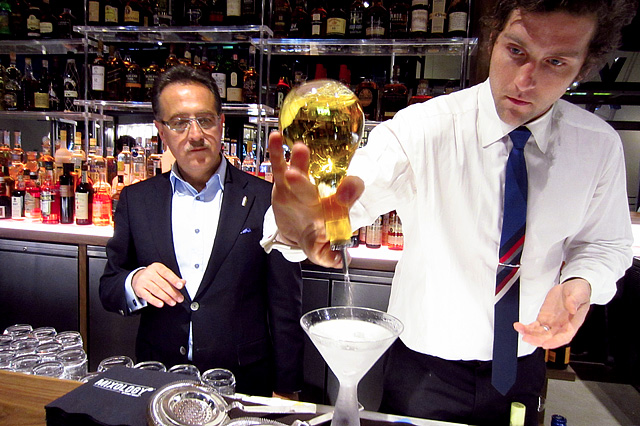 A few dashes of dry vermouth are added, unmixed. 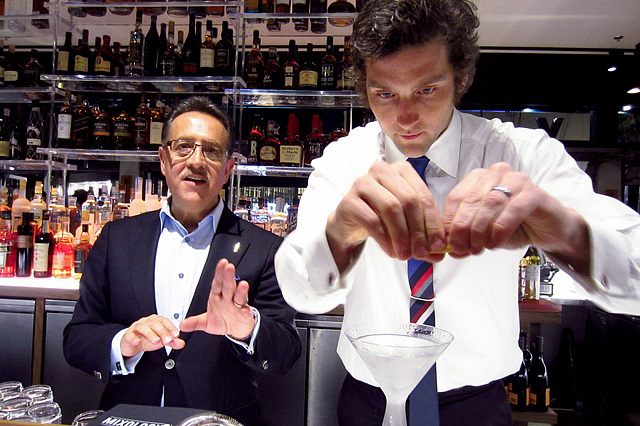 A lemon twist to finish the House Martini.

Purists will likely grumble about the House Martini, from the method of preparation to the option of “gin or vodka?” offered by the bartenders. While my personal preference is for a wetter Martini (2:1 gin to vermouth), make no mistake: Calabrese’s Martini is excellent. Is it “the best Martini in the world,” as many have said? Let’s put it this way: I would love to get Calabrese and Musso & Frank’s Manny Aguirre behind a bar sometime for the Ultimate Martini Throwdown.

Next was the Breakfast Martini, made with Bombay Sapphire, Cointreau, fresh lemon juice and orange marmalade. An entire subset of marmalade-based drinks goes back at least as far as 1930’s Marmalade Cocktail, created by Harry Craddock and published in The Savoy Cocktail Book. Calabrese’s modern classic was invented in 2000, at the Library Bar at the Lanesborough Hotel. Calabrese credits the inspiration for the Breakfast Martini to his wife, who insisted one morning that instead of his usual espresso he had to eat something, which happened to be toast with marmalade. The Breakfast Martini is essentially a Gin Sour that gains a richness and bitter notes from the orange marmalade. The Cointreau gives further structure to the cocktail, which will surely be a popular choice beyond the wake and shake timeframe its name suggests. 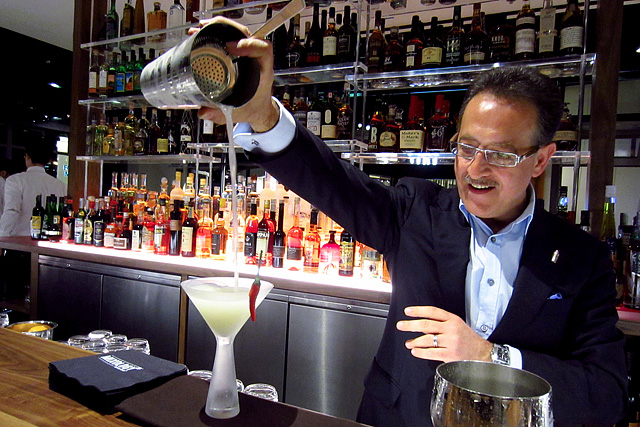 Calabrese makes one of his signature cocktails, the Spicy Fifty.

Then came a signature cocktail from Calabrese’s former bar, Fifty. The Spicy Fifty is made with Stolichnaya Vanil vodka, elderflower cordial, fresh lime juice, honey syrup and chili pepper. An eye-opening cocktail, not only because of the spicy kick at the finish, but for the fact that I enjoyed a cocktail made with Stoli Vanil. With its balance of sweet, sour and lingering heat, the Spicy Fifty is another winner from the Martini section.

The Conductor and The Maestro team up for the Farmer’s Martini: frozen Stoli Elit, a dash of blue curacao, Salvatore’s bitters and champagne. 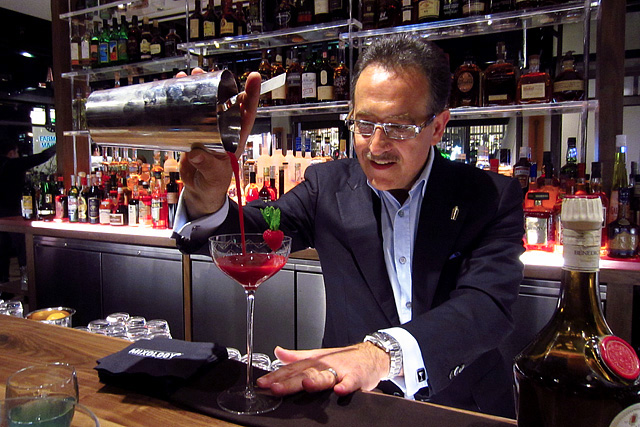 Calabrese makes the Hollywood Bubbles, from the Champagne Cocktails section. 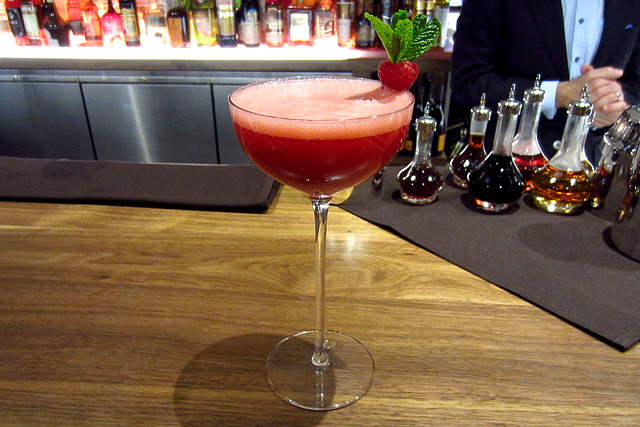 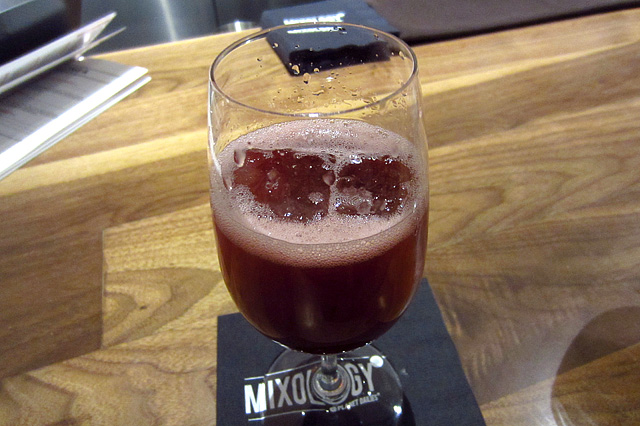 After the demos had concluded, Dos Santos offered to make a Short & Sublime cocktail, the Jamaican Sangria: Appleton 12-year rum, red wine, apricot brandy, framboise liqueur, fresh orange juice and honey syrup. With warmer temps just around the corner, here’s hoping this Caribbean twist on the Spanish favorite will be served by the pitcher. 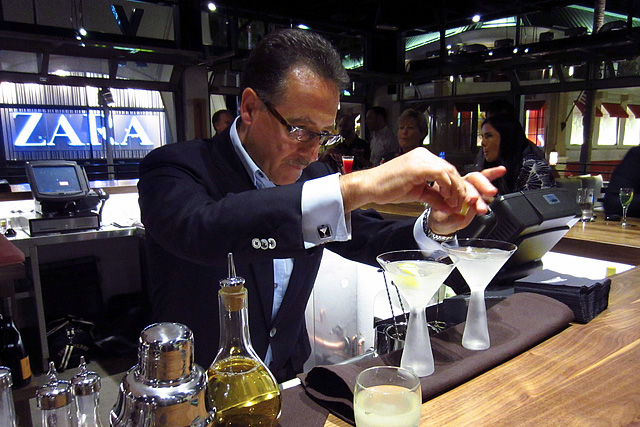 The Maestro returns for an encore and makes the House Martini for eager guests.

A bar called “Mixology 101” is going to have its skeptics, and I’ll admit I was one of them when the name was announced last fall. Having tasted a few of the dozens of cocktails on offer and seen Brooke’s team in action, it’s safe to say The Maestro’s bar program is in good hands. With its high profile, central location between the Original Farmers Market and The Grove, Mixology 101 is going to attract plenty of traffic from tourists and locals alike. The approachable menu, mixed with classics and signatures, along with a well-curated spirits list, will keep them coming back.

Mixology 101 is now soft open, with a grand opening scheduled for April.

For more photos from the Mixology 101 preview, visit the Thirsty in LA Facebook page.